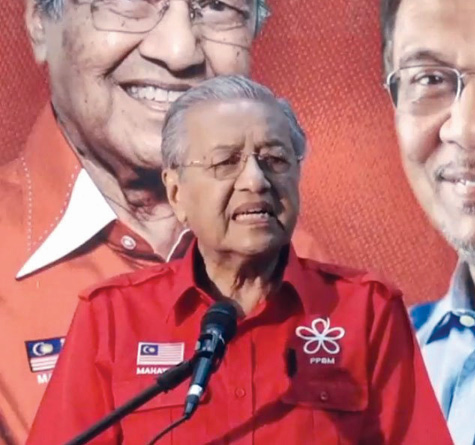 May 10—Dr. Mahathir Mohamad was once again sworn in as the next Prime Minister of Malaysia today, following the stunning and overwhelming victory by the opposition coalition he put together to challenge his former UMNO party and his former protégé, Najib Razak, in the May 9 election. This is the first time since independence from the British in 1957 that the UMNO coalition has been removed from government.

Dr. Mahathir, now 92 years old, served as Prime Minister from 1981 to 2003, and famously stood up to George Soros and the IMF in the 1997-98 “Asia Crisis,” rejecting IMF dictates to impose austerity, and instead imposing capital controls on the national currency, the ringgit, and declaring currency speculation by Soros and his fellow vultures to be “unnecessary, unproductive and immoral.” He also fired his Deputy, Anwar Ibrahim, who had backed the IMF and Soros against Mahathir. At the time, EIR’s many reports on the global financial crisis and on the crimes of George Soros were being followed closely within the Malaysian government, while EIR took it upon itself to circulate Mahathir’s speeches and articles around the world, where other leaders suffering from “IMF conditionalities” were grateful readers.

Mahathir had been the longest serving Prime Minister of Malaysia, voluntarily stepping down in 2003. In 2015, however, he launched a fight against Najib and his own party over declining economic growth and corruption, which peaked with the “One Malaysia Development Berhad” (1MDB) scandal, a multi-billion dollar investment fund set up by Najib. Nearly $700 million went missing from 1MDB and showed up in accounts connected to Najib, while billions more are still unaccounted for. The case is under investigation in the United States and Singapore, but Najib quashed any serious investigation within Malaysia.

Mahathir formed his own party, joined a coalition (Pakatan Harapan, Alliance of Hope) that included several of his former enemies and, to the shock of most experts, has now won the national election.

Mahathir and the Belt and Road

In his press conference Thursday morning, the first question was about China and his view of the Belt and Road Initiative. During the campaign, Mahathir had been highly critical of several deals struck with China by Prime Minister Najib, because of what Mahathir considered to be conditions unfavorable to Malaysia. Answering at length, Mahathir made clear that he fully supports the Belt and Road, and will work closely with China, while also wanting to review some of the contracts. His answer:

We need to study all the things done by the previous government, not only about China—a lot of things inside the country. China has a long experience dealing with unequal treaties [under the British —ed.], and China renegotiated them. So if necessary we will renegotiate the terms. But what amount of money was borrowed by the government? [Malaysian ringgit] 55 billion [$14 billion] for the East-West railroad, and lots of other things which will be a great burden on the government. The government must try to reduce borrowing, otherwise we will be in bad shape.

As far as the Belt and Road problem—we have no problem with that. Except we don’t want to see warships in the region, because warships attract other warships, and things will become tense. In the past we had a nuclear free zone, so we would not like to have potential warfare in this country.

But we support the Belt and Road program. In fact, I myself wrote to Xi Jinping on the need of a land connection with Europe using trains, which are faster than ships. When the demand for oil grew, ships were built bigger and bigger, reaching a half million tons, but trains remained small, not long enough. So I suggested to Xi Jinping in a personal letter that we need big trains, and China has the technology to build big trains, to take goods to Europe, and also to make Central Asia—Kazakhstan, Uzbekistan, and so on—to be more accessible, to transfer their goods, their raw materials, to China, to Japan, and to Southeast Asia. 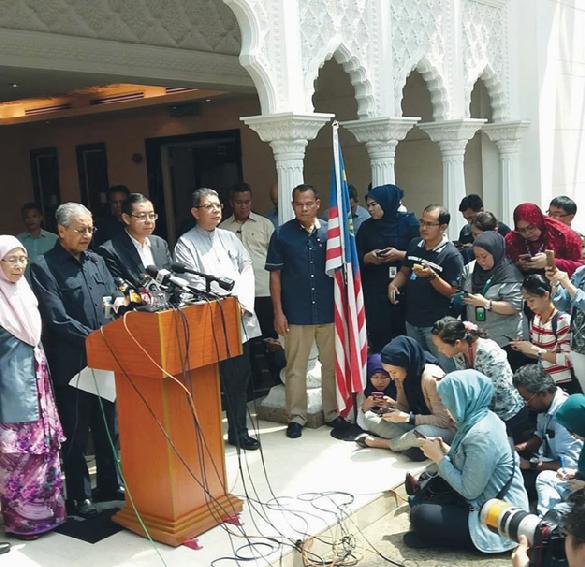 Mahathir’s facebook page
Dr. Mahathir Mohamad on May 10, the first day on the job after his election.

Like the Brexit vote, the election of Rodrigo Duterte to the Presidency of the Philippines, and the election of Donald Trump to the Presidency of the United States, the return to leadership of Dr. Mahathir Mohamad expresses the unfolding change in the global paradigm, with a great potential to help resolve many crises in Southwest Asia and elsewhere in the developing world.

One businessman who has worked on international projects with Mahathir’s leading economic advisor, Daim Zainudden—who will serve on Mahathir’s Council of Elders to get the new administration up and running—told EIR after the election that he has seen evidence that Mahathir still enjoys huge respect around the world, especially in the majority Islamic nations, for his defense of development and sovereignty.

The financial oligarchy in the West is wary of Mahathir’s return to power. Back in 1997, after Soros and his ilk had unleashed the attack on the Asian currencies—which Lyndon LaRouche identified at the time as the first blow of a global financial breakdown—Mahathir identified Soros and the appropriately named “vulture funds” for their crimes. On Sept. 19, 1997, the day before Mahathir was to speak at an IMF meeting in Hong Kong, the Wall Street Journal’s Asian edition ran a front page freakout: “Malaysia’s Mahathir Finds Strange Source for Soros Campaign: Asian Country’s Media Tap U.S. Conspiracy Theorist Lyndon LaRouche, Jr.” Complaining that EIR’s April 1997 report, The True Story of Soros the Golem—A Profile of Mega-Speculator George Soros, was widely circulating in Malaysia, the Journal wrote:

Mr. LaRouche has long been at odds with the U.S. political mainstream, which regards him as an extremist in his views about reforming the global financial system. But his theories receive a warmer reception in Malaysia, where the 60-page EIR report on Mr. Soros has been passed among Malaysian editors, intellectuals and politicians.

Mahathir has always been a major thorn in the side of the British and others in the West who have tried, and are still trying, to divide Asia into pro- and anti-China blocs, to maintain the British Empire’s division between East and West. In an interview with this author for EIR on Feb. 16, 2014, Dr. Mahathir commented on his meeting with President Xi Jinping in Kuala Lumpur soon after Xi had announced the Maritime Silk Road in Indonesia, in October 2013. Mahathir and Xi created a new institution, the Cheng Ho Association, named after Adm. Cheng Ho (Zheng He), who led the huge armada of Chinese Treasure Ships to the West in the 15th Century. Mahathir said:

[Cheng Ho] is a remarkable leader, a remarkable man. He came with very powerful forces, not to conquer, but to establish diplomatic relations with countries. China never attempted to conquer countries. They wanted to establish diplomatic relations and trade with these countries. This contrasts with the first Portuguese—with Vasco da Gama, Afonso de Albuquerque, and Diogo Lopes de Sequeira—all of whom came here in order to conquer. The Portuguese arrived in Malacca in 1509. Two years later, they conquered Malacca. The Chinese had been in Malacca for many, many years before that, and never conquered Malacca, although they had so many Chinese in this country who could have formed a fifth-column for them. But they never tried to conquer. So there is this difference between Cheng Ho and the Portuguese and the other Europeans. Cheng Ho established friendships. So this Association that we are going to form is in order to celebrate friendship between nations. There will be an award for the people who work most to bring about friendship between countries.

Asked about terrorism and the violent divisions within the Islamic world, Mahathir answered: “At the back of this all is the British. The British have caused more damage in this world than anybody else, through their colonial policies in the past, and through the conclusion of their decolonization process—all these things have left behind a legacy that leads to war.” 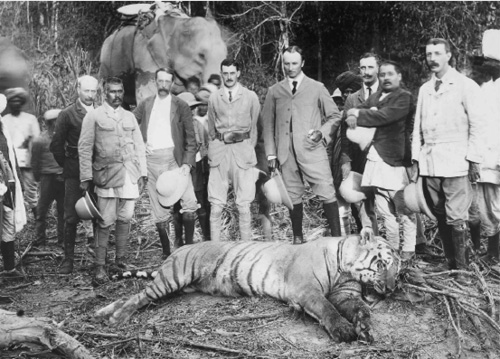 George Nathaniel Lord Curzon, Viceroy of India. In EIR’s warning to the “Asian Tigers” that they were being set up with hot money, EIR ran this photo with the caption: “This is how the British treat tigers.”

As the Wall Street Journal painfully noted, Mahathir and his circle had been following LaRouche’s unique analysis of world affairs, and his visionary economic and development proposals for several years when the 1997 Asian crisis erupted. Western speculators had been massively pumping hot money into what they called the “Asian Tiger” economies and the emerging Southeast Asian economies, including Thailand, Indonesia, and Malaysia. The dumb pundits were universally assuring these countries that the bonanzas in the speculative markets would go on forever. One exception was LaRouche’s EIR. The Feb. 7, 1997 issue of EIR carried an article by Michael and Gail Billington titled, “London Sells a Killer ‘Tiger’ Tonic to Southeast Asia,” and a national EIR conference that month featured a presentation by Gail Billington on the same theme—that the Asian Tigers were about to “head down Mexico way,” referring to the collapse of the Mexican currency and economy in 1994. The photograph accompanying the article showed a team of British oligarchs, kneeling with their rifles over a dead tiger after a hunting party in the colonies. 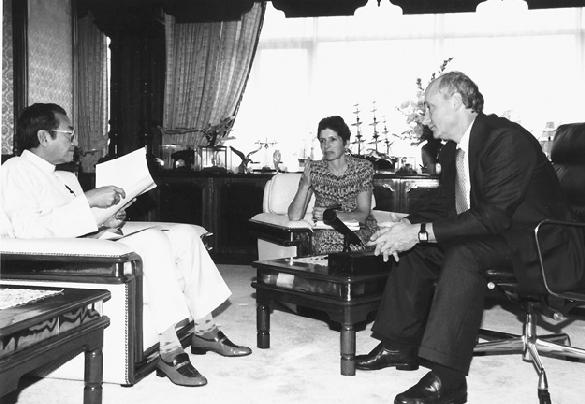 Dr. Mahathir expressed his gratitude for EIR’s role in a letter of condolence upon Gail Billington’s death in 2012:

My condolences on the passing away of Gail. Gail’s demise is a loss not only to you, but to all who believe in truth and justice in the perception of the affairs of the world. Gail did much to correct the wrong image of Malaysia created by the controlled Western Press, especially during the financial crisis of East Asia. I pray to God that He will grant Gail rest in peace. 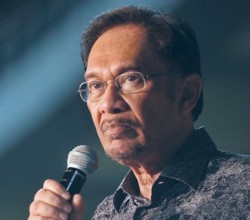 Firdaus Latif
Anwar Ibrahim. Will he continue taking orders from the neocons and vulture funds, or can he change?

As mentioned, Dr. Mahathir fired his deputy, Anwar Ibrahim, at the time of the 1997 crisis. Apart from his backing of IMF demands, Anwar had a history of ties to the Muslim Brotherhood and Saudi Arabia. Following his dismissal and subsequent arrest on charges of sodomy, Anwar became the darling of the Western neocons and financial oligarchs, including Soros, Al Gore, and Paul Wolfowitz, in a campaign to demonize Mahathir and organize a “color revolution” to bring down his government. This author confronted Anwar in person and in print on his role on behalf of the British. 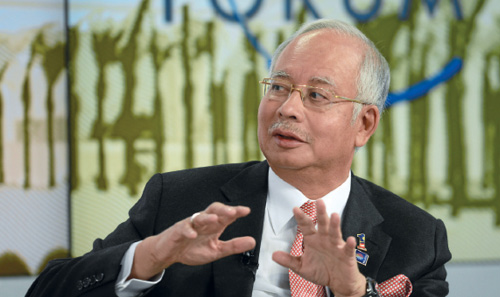 Ironically, Mahathir dropped his enmity to Anwar, and others of Anwar’s circle in Malaysia, when he recognized that the massive corruption of the Najib government required it. Mahathir joined in a coalition with Anwar’s People’s Justice Party, currently run by Anwar’s wife, Wan Azizah Wan Ismail, while Anwar is serving a second sentence for sodomy. Mahathir has even pledged to pardon Anwar and restore his rights to participate in politics. In fact, he has stated that he only plans to serve as Prime Minister for two years or less, and that Anwar could then be available to run for leadership of the coalition.

Those close to Mahathir believe that Anwar is capable of change, and that in any case, Mahathir and his close associates will have time to install a competent team in the key positions, to restore Malaysia to its place as a model for development internationally, as it was under Mahathir’s earlier leadership.

One close associate who works in development projects internationally, told EIR that Mahathir is still greatly admired around the world, especially in the Islamic nations. His return to office, and his critical role in promoting the spirit of the new Silk Road, can and must be brought to bear in solving other crisis spots, and emphatically those in Southwest Asia, on the basis of development and the common aims of Mankind.