A Concert Dedicated to the Spirit of RFK, Beethoven, and the New Paradigm Tickets may be purchased here:http://www.sinycchorus.com/dona_nobis_pacem_1968_2018 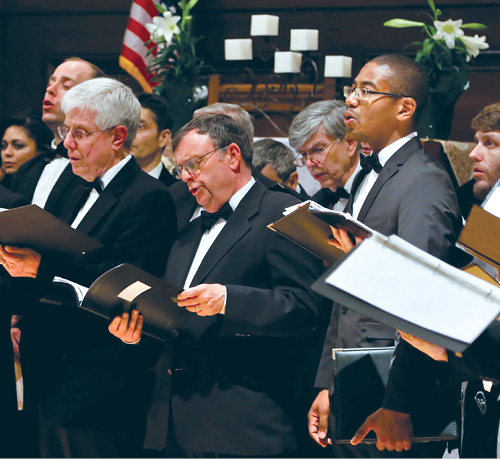 The prospect of ending the senseless, decades-long stalemate between the two Koreas, and of finally bringing the world’s two most populous nations, China and India, into a bond of friendship and cooperation based on economic development and the elimination of poverty, cannot but warm the hearts of all men and women of goodwill, pointing a way to a New Paradigm of peaceful relations among nations, based on what uniquely distinguishes man from beast, namely man’s creativity and highest purpose to improve and enrich the lives of everyone on (and above) this planet.

This prospect is a vindication of the life of John F. Kennedy, and no less of his brother Robert, felled by an assassin’s bullet five decades ago, on June 6, 1968 in the midst of his campaign to bring to an end the humiliating war in Vietnam.

It is likewise a vindication of the life’s work of Schiller Institute founder Helga Zepp-LaRouche and her husband, physical economist Lyndon LaRouche, whose banner of a creativity-based economic policy, replacing the old, fatally flawed money-based model, is now being carried by China, in the form of its worldwide Belt and Road Initiative for the elimination of poverty not just in China, but everywhere.

And Ludwig van Beethoven, who, like all great poets, had his hand firmly planted on the world’s pulse, is also now vindicated! Indeed, Beethoven once commented to a friend that if people took seriously the discovered principles embedded in his compositions, warfare within and among nations would become an impossibility. For him, as well as for “Poet of Freedom” Friedrich Schiller, the content and intent of peace is the ennoblement of the human soul, so that the individual can proceed to ennoble others as well. As Beethoven jotted down, while sketching out the “Dona nobis pacem” (Give us peace) section of his mighty Missa Solemnis:

“Strength of sentiments of inner peace above all else . . .Victory!”

which he later transformed into the motto of his entire monumental work:

“Plea for inner and outward peace.”

It is the same with the immortal Schiller: Among his many poems is his “Song of the Bell,” in which the joint planning, forging, protection, and raising of the bell is a metaphor for the composition of true political freedom. His poem concludes:

From her dungeon swing the bell,

Till she rise to heaven’s height,

In the realm of sound to dwell!

See her move and soar!

Joy unto this city bringing,

The concert will begin with a selection of African-American Spirituals which is a hallmark of Schiller Institute NYC Chorus’s efforts to preserve this precious assertion of man’s dignity against all efforts to degrade him to a beast.

The featured work is Beethoven’s Mass in C, Opus 86, which he composed in 1807 at the behest of Prince Esterházy, son of the late Prince Esterházy who had sponsored Joseph Haydn’s career.

Contrary to some who attempt to cast Beethoven as a product of the “Enlightenment,” which relegates creativity to the domain of the Unknowable, Beethoven was a true Promethean in the tradition of Plato, Kepler, and Leibniz, and was dedicated to making creative discovery intelligible to all seekers of Truth. He was therefore deeply religious in that sense, i.e., not in the sense of doctrine, and thus his approach to setting the Catholic mass. As he noted in 1818 while working on his Missa Solemnis:

In order to write true church music . . . look through all the monastic church chorals and also the strophes in the most correct translations and perfect prosody in all Christian-Catholic psalms and hymns generally.

Sacrifice again all the pettinesses of social life to your art. O God above all things! For it is an eternal Providence which directs omnisciently the good and evil fortunes of human men.

Short is the life of man, and whoso bears

On him men call down evil from the gods

While living, and pursue him, when he dies,

With cruel scoffs. But whoso is of generous heart

His praises far and wide to all mankind,

And numberless are they who call him good.

Tranquilly will I submit myself to all vicissitudes and place my sole confidence in Thy unalterable goodness, O God! My soul shall rejoice in Thy immutable servant. Be my rock, my light, forever my trust!

Sad to say, Beethoven’s passion for Truth was a bit too much for Prince Esterházy to take. Following the first performance on September 13, 1807, the Prince complained to Countess Henriette Zielinska:

Beethoven’s Mass is unbearably ridiculous and detestable, and I am not convinced that it can ever be performed properly. I am angry and mortified.

Nevertheless, two movements of the Mass were joyously received in Vienna the following year, along with his Choral Fantasy, Op. 80.

This pairing of the Mass and the Choral Fantasy, by the way, is significant for Beethoven’s creative work in general. Just as his motivic development in his Mass in C foreshadows his Missa Solemnis, so the main theme of the Choral Fantasy points directly to the final choral movement of his Symphony No. 9. And it is no accident that the 1824 premiere concert of the Ninth also premiered three movements from his Missa Solemnis.

The New Paradigm and the Sublime

All great works of Classical art, whether they be music, drama, poetry, the plastic arts, or all combined, are dynamic ideas which impel the beholder into the domain of the Sublime. This is done through stark juxtapositions or paradoxes which are in the domain of metaphor, in the extended sense of William Empson’s treatise, Seven Types of Ambiguity. (See also Lyndon H. LaRouche, Jr., “On the Subject of Metaphor,” Fidelio, Vol. 1, No. 3, Fall 1992).

As Schiller writes in his essay, “On the Sublime”:

The feeling of the Sublime is a mixed feeling. It is a composite of sorrowfulness, which in its highest gradation is expressed as a shuddering; and of joyfulness, which can intensify into delight, and, although it is not properly pleasure, is what cultured souls prefer by far over all pleasure per se. This union of two contradictory sentiments into a single feeling proves our moral self-subsistence in an irrefutable manner. . . . Through the feeling of the Sublime, therefore, we have the experience that our state of mind is not necessarily governed by the state of our senses: that the laws of nature are not necessarily also our laws, and that we have within us a self-subsisting principle which is independent of our sense impressions. [emphasis added]

In the 20th Century, the great conductor Wilhelm Furtwängler put the same principle another way when he argued that actual musical ideas are located entirely outside of sense-perception, “between” or “behind” the notes.

Beethoven’s evocation of the Sublime is particularly compelling in the concluding “Agnus Dei” (Lamb of God) movement of both his Mass in C and his Missa Solemnis. In this section, the wrenching “Agnus Dei, qui tollis peccata mundi” (Lamb of God, who taketh away the sins of the world) assumes a downright warlike cast, as the defenseless Lamb is led to slaughter, only to be interrupted by the gentle, sunny warmth of “Dona nobis pacem,” which emerges victorious. And then, just to make the point clear, Beethoven alternates both episodes a second time.

The unifying principle of the Sublime in this concluding movement is reinforced by Beethoven’s Motivführung, i.e., his use of inversions and transformations of the very same “rising fourth” thematic material that opens the entire Mass in the first “Kyrie” movement.

The audience’s moral victory upon contemplation of two brothers locked in seemingly irreconcilable conflict is evident not only in Schiller’s famous “Ode to Joy” (“All men become brothers where’er tarries thy gentle wing”), but also in Schiller’s very first drama, The Robbers, and his penultimate play, The Bride of Messina. In the former play, the brothers’ dying father, in words laden with Biblical imagery, yet almost Confucian in tone, admonishes:

How lovely a thing it is when brethren dwell together in unity; as the dewdrops of heaven that fall upon the mountains of Zion. Learn to deserve that happiness, young man, and the angels of heaven will sun themselves in thy glory. Let thy wisdom be the wisdom of gray hairs, but let thy heart be the heart of innocent childhood.

Those who know and love Johannes Brahms’ A German Requiem will immediately recognize “How Lovely Is Thy Dwelling Place.”

Such is always the dialog of great artists, across time and space. And such is the substance of the New Paradigm.