This article appears in the June 1, 2018 issue of Executive Intelligence Review.

May 26—More nations have agreed to join the China-Singapore Connectivity Initiative (CCI) Southern Transport Corridor, an intermodal transport system connecting Chongqing, China, with Singapore, which offers a shorter and more direct trading route between western China and Southeast Asia than that provided by the present route along the Yangtze River to Shanghai.

Chinese provinces such as Sichuan, Henan, and Hunan, as well as countries such as Poland and the United Arab Emirates (UAE), all expressed their wish to help build the corridor at the 10th Pan-Beibu Gulf Economic Cooperation Forum and Second China-Indochina Peninsula Economic Corridor Development Forum, held in southern China’s Guangxi Zhuang Autonomous Region on May 24.

The new rail corridor runs from Chongqing in southwest China to the Qinzhou port in Guangxi Province on the Gulf of Tonkin. From there, goods will be carried by ship to Singapore, and will then proceed further along the Maritime Silk Road route to Southeast and Southwest Asia, and further on to the Mediterranean and Europe. 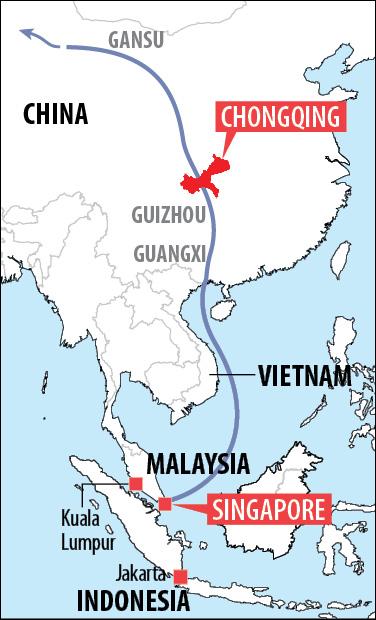 The Southern Transportation Corridor will cut transportation time from the three weeks now needed to ferry goods from Chongqing via river to Shanghai and onward to Singapore by sea, to one week. The new corridor was decided upon in 2017, and has involved close cooperation between Chongqing and Singapore in the areas of financial services, aviation, transport and logistics, and information and communication technology. In August 2017, Pacific International Lines, along with PSA International and IBM Singapore, signed an MOU to create a Blockchain, a secure, immutable and tamper-resistant ledger that can be used to track shipments. This digital infrastructure can connect parties in the supply chain, giving them access to information and real-time visibility based on their level of permission.

According to the World Economic Forum, by reducing barriers within the international supply chain, global trade could increase by nearly 15 percent.

The construction of the Southern Transport Corridor has made substantial progress since it was launched in 2017. Wei Ran, an official of Guangxi, said that cargo is now transported through the trade route to 58 ports of 35 countries. The corridor has reduced the distance for freight by 1,000 kilometers, and reduced the average travel time of cargo by 12 days. Wei also noted that 660 sea-railway trains, 100 freight trains, and 500 cross-border highway transport vehicles will operate through the route this year, which is believed to bring huge market potential.

The initiative has also encouraged western provinces such as Guangxi, Guizhou, and Gansu to move their goods via railway to the Guangxi port, and from there to Singapore and ports abroad. The CCI-Southern Transport Corridor has been referred to by China’s President Xi Jinping as the international land and sea corridor that connects the overland Silk Road Economic Belt with the 21st Century Maritime Silk Road.