Our Eurasian Economic Integration Concept Harmonizes with the BRI 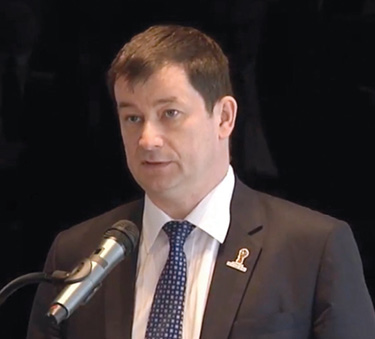 Dmitry Polyanskiy is the First Deputy Permanent Representative of the Russian Federation to the United Nations. These are his remarks to the Schiller Institute conference, “Dona Nobis Pacem— Grant Us Peace, Through Economic Development,” convened in New York City on Saturday, June 9, 2018. He spoke on Panel 1 of the conference: “A New Paradigm of Global Relations, Ending Geopolitics—The Four Powers.”

Dennis Speed: In introducing the next speaker, I want to point something out. At a very dark time in American history, between 1861 and 1865, when our nation almost disappeared, Russia and its leader, Alexander II, allied with our nation and were instrumental in preserving it. That is, together with Abraham Lincoln, Alexander II freed serfs in Russia and slaves in America.

In the 20th century, at a very dark time in European history, when Russia had been invaded by Hitler’s armies, and even prior to that time, President Franklin Roosevelt made sure that the United States joined with the Soviet Union and fought together against fascism. That was a proud moment.

Today, it is the intent, certainly of the Schiller Institute, and as we understand it, apparently of the President of the United States, to make sure that there is a new form of cooperation, of peace through development. It is our hope that, today, as you listen to the next speaker, you think of ways in which you can contribute to making sure that a New Paradigm of global relations that ends geopolitics, actually comes into being.

It is my honor to introduce to you Dmitry Polyanskiy, First Deputy Permanent Representative of the Russian Federation to the United Nations. [applause]

Dmitry Polyanskiy: Thank you very much, thank you. I’m very much honored to be here. To be quite frank, I didn’t prepare a special speech for this event, but I’m absolutely open to any suggestions, any comments, and I would be most ready to answer your questions.

The topic of your discussion I think is very important: “Grant us peace through economic development.” This is very much echoing the policy of the Russian government, because we are open to fruitful and mutually beneficial cooperation, with all the countries in the world, without any exception. Some people may assume that there is a certain anti-American mood in my country, because of all the obstacles that we’re facing in the world arena, because of all this public criticism that we’re hearing. But this is not true!

Russia still remains very friendly towards the United States; we still maintain a very big interest in what’s happening in your country. We know that your country has a great history; we know that Americans are very wise people, and they will make good decisions. If I’m not mistaken, Winston Churchill once said that Americans always make the right decisions, but only after they have tried all the wrong ones! [laughter]

So I think eventually the good will prevail. Maybe we’re very close to it. It very much depends on our interaction with Washington. It’s not because we are big states, it’s because we are responsible states. We understand very well what’s happening in the world; we understand the challenges, we understand the possibilities, and I’m absolutely sure that our interlocutors also understand how the world can benefit from close cooperation and trust between Russia and the United States.

I think trust is the key word here. In the United Nations we are working as hard as we can, for the re-establishment of trust. We discuss all the topics with our partners, including American partners. We don’t have any taboos in our discussion, and we value very much the cooperation that we have.

We Will Welcome a Settlement with North Korea

Speaking about trust, I would say that during the last several years, maybe ten years, maybe a little bit less, we have advanced very much on the path of the establishment of trust and mutually beneficial cooperation with China. China is Russia’s most important partner. We very much like the Chinese people. We expanded to a large extent the exchanges between our peoples—people-to-people contact. There are a lot of Russian tourists in China right now, and there are lot of Chinese tourists in Moscow. The Chinese language is now very widely taught in Russia, including in schools; the Russian language is very popular in China, as well.

So we are making steps towards better understanding each other. It’s not always easy to read the Chinese mind for us, really. It’s a big challenge. But we do not teach others how to live and what to do and what not to do. We’re not intrusive; we’re not assertive. And that’s why we proceed from a mutual understanding of respect, for history, for traditions. We really believe that being different doesn’t mean being dangerous, and that is the cornerstone of our relations with other countries, including China.

Our “Pivot to the East,” which was declared several years ago, is not something that is being done in retaliation to the attitude of the West. This was a long-awaited move that we should have really taken, regardless of any elements of our relations with the United States and with the West. So, we really should have made this step a long time ago, and the events that followed, after the crisis in relations between Russia and the West, after the heaps and oodles of misunderstandings that we have now in our relations, these events, of course, accelerated our mutual movement towards each other with China.

So we have very actively supported the One Belt, One Road initiative. We have a lot of common projects together. We have an understanding that the concept of Eurasian integration that is being promoted by Russia and by some of our partners from CIS countries, does not contradict, but even, I would say, supplements very well the initiative of One Belt, One Road.

We include these topics in all the consultations that we have with Beijing. Recently, we signed an agreement on cooperation between the Eurasian Economic Union and China. This is not a free trade agreement. A free trade agreement is a very challenging move: Maybe it will be the next step. But this cooperation agreement is something that will really bring us closer together. It gives us additional leverage and tools to promote cooperation: first of all, economic cooperation; streamlining procedures to avoid red tape; and again, bringing our peoples and our countries towards each other.

It’s very important to point out that Russia and China are not making friends against somebody. It’s not a closed club. It’s not something that we are together like, you know, a G2 [laughter], forming some alliance against America, against the West; no, absolutely not. We understand that our Chinese friends and partners have very important economic interests in the United States, in Europe, and it would be crazy of us to demand that China abolish these policies and absolutely be friends only with us. It would be a bit childish and I would say unreasonable to be such jealous people about cooperation of other countries.

So, we support every move in the world that leads to some kind of detente, that leads to some kind of better understanding among different countries. We supported the move by President Trump to engage in negotiations with North Korea. Some people said that Russia was jealous because Russia is not participating. It’s OK with us. If you guys can come to terms with North Korea, we will welcome it, really, very sincerely. If you want us to participate at some later stage, we will participate. If you don’t want us to participate, we don’t want to participate. No problem. We don’t want to bother you.

We want peace and cooperation to prevail, bilaterally, multilaterally, in any format possible. We are against hate speech, and we are against neglecting the principle of presumption of innocence, which is very often omitted vis-à-vis Russia today, unfortunately, in many cases. We have to face this on a daily basis.

We really hope that there will be better understanding between us and the people in Washington. There was a very difficult time, until recently. Today, there are, I would say, some glimpses of hope. Right now, relations between Russia and the United States are very, very fragile, and I would say that we need to work a little bit, and to understand whether such relations are sustainable, or if it’s just a matter of chance. But we have hope. We are a patient people.

Thanks to economic sanctions, Russia has become almost self-sustaining in many spheres, first of all with regard to the European Union. Five, six years ago, things were different, but now Russia is producing such a large number of agricultural products, like cheese, for example. I was absolutely sure that we were incapable of making good cheese [laughter]. But, I turned out to be absolutely wrong. If you come to the Russian shops right now, you will see there are really very good, and very high-quality cheeses, beers, I don’t know—everything else. So we are not depending on the West any more in this regard.

There are, however, certain things for which we really are still dependent, such as pharmaceuticals and medicines, so we are not really keen to disrupt cooperation, but we will cope. Even if the time comes when it will be harder and more difficult for us, Russia will cope. Russia will survive. No problem.

But we really hope that people here will become more mature in terms of international politics, that they will feel more responsibility for what they are doing, and we will be able to join our efforts, in wider formats. I heard recently that there are ideas of bringing Russia into the G8, for example, but this is not very real for us at this stage. Actually, we initially preferred the G20 to the G8, and I think that this format is better now. It’s a more or less balanced economic format, which better reflects the situation in today’s world. So we would be very keen to promote that format instead.

That’s it in a nutshell. I don’t know whether my remarks were helpful or not, but I can assure you that we would not spare any effort to bring our countries together and to make our world a safer place.

So I will sit down. If you have any questions on any topic not raised here, I would be glad to answer them. Thank you very much. [applause]