June 11—With two major international events taking place this past week, the G-7 in Charlevoix, Canada, and the 18th Summit of the Shanghai Cooperation Organization (SCO) in Qingdao, China, it was like a “tale of two cities,” a theme popularized by Charles Dickens in his novel of that name. Indeed, it was the “worst of times” for the “old boys” in the G-7 and “the best of times” for the relatively new organization, the Shanghai Cooperation Organization, which also represents the interests of the developing countries. And the rancor expressed in the tumultuous aftermath of the Charlevoix G-7 strongly contrasted with the spirit of harmony, the “Shanghai Spirit” as it’s called, which characterized the SCO meeting. And yet from these contrasting events, we can see new forms of “governance” emerging in the world, with President Trump—traveling to Charlevoix—calling for Russia’s return to the G-7, in order to shake up this gaggle of politicians intent on preserving the geometry of the Cold War era, and President Putin replying from his press conference at the SCO that he would certainly be prepared to invite the leaders of the G-7 to Moscow for a G-8 Summit. While most of the G-7 leaders were fuming over President Trump’s proposal, the new Italian Prime Minister Conte greeted it as a breath of fresh air. President Trump left the G-7 leaders stewing in their own juices, in order to attend a meeting with North Korean leader Kim Jong-un for a major historic breakthrough in the 65-year-old “frozen conflict” on the Korean Peninsula. 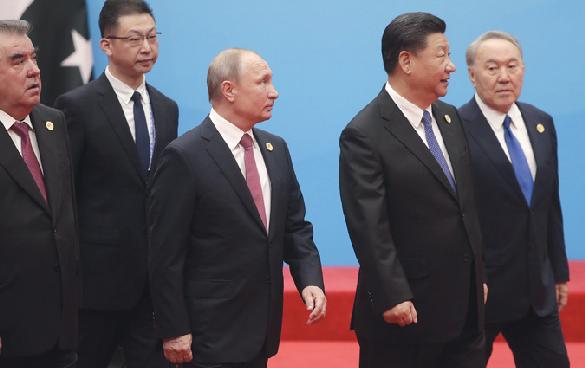 The Shanghai Cooperation Organization was hosted this year by China and held in the beautiful Chinese coastal town of Qingdao, in Shandong Province, the home of the Chinese philosopher Confucius, whose spirit President Xi called forth as the guiding spirit of the SCO deliberations. The SCO was created in 2001, coming out of the 1996 meeting of five countries, China, Russia, Kazakhstan, Tajikistan, and Kyrgyzstan—the so-called “Shanghai Five”—to discuss border and border security problems remaining after the breakup of the Soviet Union. Uzbekistan joined the five in 2001 and the SCO was born. Their collaboration has since expanded into other areas and begun to attract more countries. At Qingdao, the now eight members, China, Kazakhstan, Kyrgyzstan, Russia, Tajikistan, and Uzbekistan, now including the new members India and Pakistan, discussed many of the regional issues, with an emphasis on how to push the economic development of the region forward, and how to combat an increasingly dangerous terrorist threat. In addition to the eight SCO members, there were also four observer nations at the meeting—Belarus, Iran, Afghanistan, and Mongolia. Also participating were six “dialogue partners”—Turkey, Sri Lanka, Nepal, Cambodia, Azerbaijan, and Armenia. Taking all of these into account, the SCO meeting had representation from countries representing over 45% of the world’s population and 70% of the Eurasian landmass.

Characteristic of the organization is what is called the “Shanghai Spirit,” a spirit of cooperation that President Xi noted was characterized by “mutual trust, mutual respect, respect for diverse civilizations, and pursuit of shared development.” The addition of India and Pakistan to the SCO, two countries which have long been at loggerheads, symbolizes the importance of that spirit in working together to cope with common problems. The SCO may well represent for them a crucial forum to resolve some of the outstanding issues between them.

Together with the BRICS (Brazil-Russia-India-China-South Africa) group, the SCO is one of the most important groupings representing the developing sector and its interests. At Qingdao, there was greater emphasis on the issues of development and on the need for improving the mechanisms of “global governance.” Most of the countries involved in the SCO are also involved in the Belt and Road Initiative, and there is great synergy between the two. China proposed to create a special lending facility within the SCO Inter-Bank Consortium specifically for development projects in the SCO countries, and will itself contribute $4.7 billion to that facility. China also agreed to train 2,000 law enforcement officers from SCO countries for three years, to assist the SCO countries in law enforcement. In addition, China will provide 3,000 training opportunities in human resources development for SCO member states in the next three years, in order to enhance public understanding and support for the SCO.

Security continues to be a major issue of SCO concern, as do the increasing tensions on the international strategic level. The defeat of ISIS in Syria has not led to the complete destruction of that organization, but rather to the redeployment of their extant cadre to other nations of the world, including those in Central Asia as well as Southeast Asia, which have already felt some of the effects of this redeployment.

The issue of Afghanistan was also a major item of discussion at the summit. President Emomali Rakhmon of Tajikistan called for a major infrastructure program for Afghanistan, particularly the construction of new roads and highways, in order to create greater connectivity within Afghanistan, and between Afghanistan and its neighbors, of which Tajikistan is one. President Xi praised the Tajik President’s contribution to the discussion. The failure to get a handle on the insurgency in Afghanistan can easily spill over into its neighbors. This is all the more reason for the SCO members who live in the same neighborhood to play a greater role in dealing with the problems in Afghanistan. And while the SCO is concerned with security issues, and does conduct joint military maneuvers and could play a role in “peace missions,” the SCO will probably not serve as a military force in Afghanistan to quell the insurgency. Still, the possibility offered by the SCO countries for greater economic and trade collaboration with Afghanistan can provide a crucial contribution to this unsettled nation—whose woes fundamentally stem from a total lack of economic development—and in that way contribute to a peaceful resolution of the conflict. If Belt and Road projects can be extended to Afghanistan, this would go a long way to quelling much of the discontent there, and create new possibilities for gainful employment for the Afghan people. 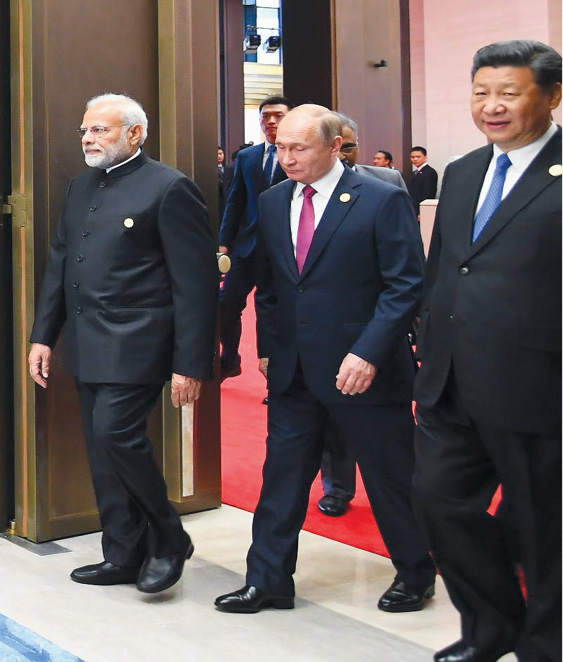 The SCO meeting was also the opportunity for a series of important bilateral meetings between the leaders of these countries. Both Kazakh President Nursultan Nazarbayev and Russian President Vladimir Putin used the opportunity of the summit to pay official state visits to China during the course of their stay. China-Russia cooperation, in particular, is absolutely crucial for the SCO’s development. The summit and President Putin’s state visit have significantly strengthened the efforts by Russia and China to synchronize their respective individual regional development initiatives—the Belt and Road Initiative with Russia’s Eurasian Economic Union (EAEU). On May 17, the two sides signed an agreement in Astana on trade and economic cooperation between the EAEU and China. “China and Russia are the main engines of the SCO,” said Jiang Yi, deputy director of Russian studies at the Chinese Academy of Social Sciences, in an interview with Global Times, “and their cooperation will benefit regional and world stability.” President Putin, during his state visit, had an opportunity to travel on China’s high-speed rail between Beijing and Tianjin with President Xi. China is also in the process of constructing the first high-speed rail system in Russia between Moscow and Kazan, the first leg of a high-speed rail connection between the two countries.

There was also an important meeting between Indian Prime Minister Narendra Modi and China’s President Xi, and another between Modi and Putin.

Chinese President Xi Jinping has proposed a new model of cooperation between countries, “a community of shared destiny for mankind.” In many respects, the SCO and its “Shanghai Spirit” serve as a prototype for this type of community. And with the old forms of “world governance” such as the G-7 now coming apart at the seams, the new spirit of win-win cooperation now gaining ground in Asia can become the leading paradigm to bring the world out of its present crisis.