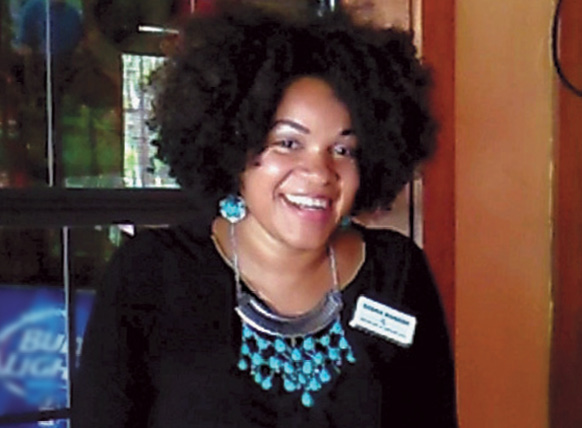 June 18—On June 6, 2018, the State of Texas put Kesha Rogers on the ballot as an independent candidate for Congress in Texas’ 9th C.D. Rogers petitioned for ballot status for the seat presently held by Al “Impeach Trump” Green of Houston. Rogers’ run for the seat is based on the simple fact, according to her, that “there is nobody currently in office, or running for office, who is championing any kind of platform to seize the future from the jaws of the failed policy paradigm of the 21st Century.” Donald Trump highlighted elements of a possible optimistic future during his campaign, such as the revival of the American System of economics, with its Glass-Steagall protections and domestic industrial productivity. Rogers underscored, “he is essentially a lone voice on the national stage, and often distracted by hand-to-hand combat with ‘the swamp’: the fake news, British-directed, intelligence and mass media coup against him.”

In her official declaration of intent to run, Rogers noted: “Our nation has been plagued by the continued policies of war and economic collapse, and cultural degeneracy, brought about by a criminal system of looting by Wall Street speculators over decades. This has left several generations of our citizens impoverished, in despair, and overdosing on drugs, with no foreseeable productive future. My commitment is to put an end to such destructive policies by leading a fight to foster the return to the very American System economic principles at the foundation of our nation’s Constitution and our republic. I am committed to restoring a productive economy and renewing optimism for our nation, and our prosperity. These needed solutions and the remedies to the continued financial collapse can be found in the Four Economic Laws proposed by statesman and economist Lyndon LaRouche, with whom I have been associated for nearly twenty years.”

Rogers won the Democratic nomination in two past campaigns for Congress. In 2010 and 2012 she campaigned on the slogan “Save NASA, Impeach Obama.” And in 2014 she became the first person of color in Texas to enter a runoff election for statewide office, running for U.S. Senate, fighting to save the Democratic Party from the train wreck of Obama, and return it to the productive missions of Presidents Franklin Roosevelt and John Kennedy.

Rogers has emphasized that unlike the “petty identity politics and corrupt economic vision” embraced by her opponent, she has an actual economic plan to build massive infrastructure, and to create crash research and development programs on the frontiers of science, starting with the development of fusion power. By reorienting the economy to actual production, rather than the casino economy of recent years, Rogers is focused on creating thousands of high-paying productive jobs.

Specifically, the candidate noted: “I represent a return to the American System of political economy authored by Alexander Hamilton but fundamentally advanced by Lyndon LaRouche’s studies of the relationship between increases in technological progress, and increases in the productive powers of human populations,” Rogers declared. “LaRouche’s Four Laws call for the crash development of fusion power as the next, revolutionary technology breakthrough, which will jumpstart a new modern infrastructure platform providing the next 50 years (or two generations) of productive employment, including in manned space exploration to the Moon and beyond, a high speed maglev transportation grid, comprehensive water management and flood control systems, and other national investments to increase the standard of living of the population, while advancing the productivity of the economy as a whole. 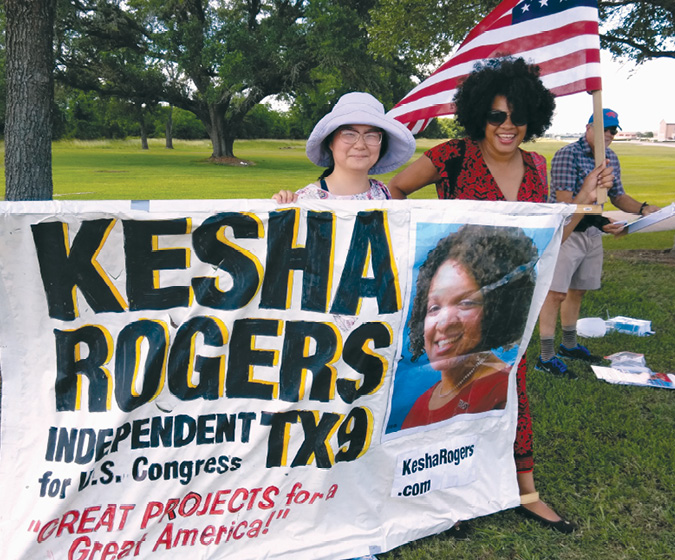 Emancipation for All Humanity

Rogers hosted her official campaign kickoff event at a BBQ restaurant in Missouri City on Juneteenth weekend. Juneteenth recognizes the anniversary of June 19th, 1865, when Union soldiers and Major General Gordon Granger arrived in Texas and announced the total emancipation of all slaves to the people of Galveston, which had actually happened by President Lincoln’s proclamation two and a half years earlier. Rogers, in her remarks at that event, proclaimed her sense of hope, saying, “Imagine how enslaved people felt, in the days before and after that announcement. They did not know they had been freed, but they did know the President had been assassinated, and the world seemed hopeless. Then they learned their freedom had already been granted, and even though it took a long time to find out they were free, when they did, they were cheering in the streets.

“This is the same predicament that Americans are experiencing today, on an even greater level. The bankrupt system of economic looting by Wall Street and the British Empire has the world wrapped up in debt slavery and war, and the news of the just world economic order expressed in the Belt and Road Initiative and Lyndon LaRouche’s Four Economic Laws has yet to be announced on our shores. People are feeling hopeless, seeing the skyrocketing suicides, opioid overdoses, the coup attempt against the President, and are saddled with so much debt. I am here to bring the news of the way out, and my campaign is dedicated to an emancipation for all humanity.”