This article appears in the June 29, 2018 issue of Executive Intelligence Review.

June 24—The British Empire is exploiting an ominous and worsening crisis in South Africa (a crisis caused by the failing London and Wall Street financial system itself) to induce a bloodbath here, to effectively knock South Africa out of the BRICS and tighten the Empire’s hold on our country.

The Empire hates the BRICS association of nations—which brings South Africa together with China, Russia, India and Brazil—and is desperate to destroy it. The BRICS is a major feature of the New Paradigm, in which nations are cooperating for the rapid industrialization of all, and the elimination of poverty. China’s Belt and Road Initiative, which is catching on fast in Africa, is another major element of the New Paradigm.

In Africa, the two iconic projects of this New Paradigm are the new standard gauge railways from Addis Ababa to Djibouti, and from Mombasa to Nairobi. But these are just the beginning. For example, construction of the Grand Ethiopian Renaissance Dam—the largest hydro-electric project in Africa, which will produce 6,450 megawatts of power—is two-thirds complete, funded by bonds purchased by the Ethiopian diaspora. The associated high-voltage line, funded by China, is already complete.

Form a mental image of the Empire’s hatred of African progress: The governments of Zimbabwe and Ethiopia are among those in Africa most attuned to the New Paradigm. On June 23, both Ethiopian Prime Minister Abiy Ahmed in Addis Ababa, and President Emmerson Mnangagwa of Zimbabwe, in Bulawayo, narrowly escaped assassination at public events. The chances that this timing was a coincidence are slim. Rather, it was probably intended that their deaths would serve as the kind of “shock and awe” that was administered to the United States in the sequence of assassinations in the 1960s—President Kennedy, Malcolm X, Martin Luther King, and Robert Kennedy. The events of June 23 provide the proper image of what the BRICS and South Africa are up against. 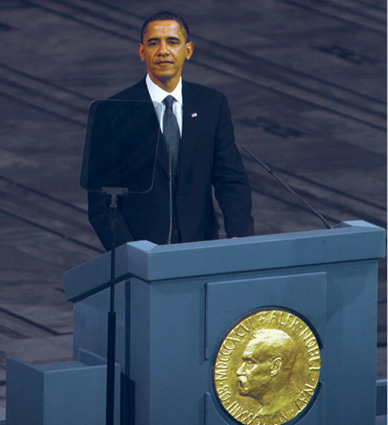 Wikipedia
Barack Obama, presenting his Nobel lecture after receiving the Nobel Prize in 2009.

Now British agent Barack Obama, the man who annihilated Libya, assassinated its leader, and attempted to turn Syria over to the ISIS terrorists, has been invited to South Africa by the Nelson Mandela Foundation—to dishonor the memory of Mandela by giving the foundation’s annual Nelson Mandela Lecture in Johannesburg on July 17. LaRouche South Africa and two Muslim organizations based in South Africa—CAGE Africa and the Palestine Solidarity Alliance—have called for the invitation to Obama to be revoked.

The Obama Foundation, headquartered in Chicago, is not coy about its mission. It has, for example, Bernadette Meehan as its executive director of international programs. She was formerly a vice president of private banking at J.P. Morgan, then special assistant to Secretary of State Hillary Clinton, and then served on killer Obama’s National Security Council.

On the South African side, the Nelson Mandela Foundation is headed by novelist Njabulo Ndebele, who spent years with the Ford Foundation in New York, a foundation associated with regime change projects.

But there is more on Obama’s agenda in South Africa than a lecture and a meeting with President Cyril Ramaphosa. He is bringing with him his friend—his former ambassador to South Africa—Patrick Gaspard, who is now the president of George Soros’ Open Society Foundations, notorious for their involvement in regime change around the world. At the time of this visit, the Obama Foundation will convene 200 of Obama’s chosen acolytes of the Young African Leaders Initiative (YALI) from around the African continent for five days of training and workshops in Johannesburg. The New York Times of April 23, in referring to this, said that “Obama is inaugurating his most significant international project as an ex-president.”

Before reaching South Africa, Obama will visit Kenya to meet Raila Odinga (and President Uhuru Kenyatta). Odinga is the presidential candidate who attempted to inaugurate himself as president last January, after Kenyatta defeated him in the election, making himself a kind of “poster child” for regime change.

When Obama reaches South Africa, he will be stepping into a country in which he and others have already been at work to engineer a bloody conflict from the prevailing, difficult circumstances. 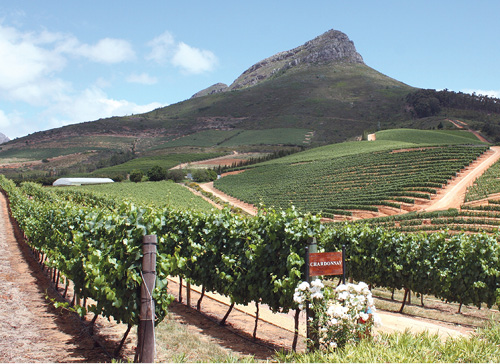 A large but unknown percentage of all South Africans—but well over ten percent—live in shacks put together from assorted materials, occupying land illegally around the cities where many of them have jobs. There is often no electricity and no running water; there are no street lights, no paved roads, and often only pit toilets. They are regularly driven off by the police, who demolish their homes. The price of urban land is sky-high.

The frequency of these events—and other poor people’s confrontations, protests, and destruction of public property—is rising, as poverty becomes worse in South Africa.

The leader of Black First Land First (BLF), Andile Mngxitama, promotes confrontation and urges the shack dwellers to seize more land. Mngxitama was formerly a Ford Foundation Fellow in the Sociology doctoral program at the University of the Witwatersrand, the center of the Eddie Webster network of regime change specialists.

Julius Malema—leader of the so-called Economic Freedom Fighters, with 25 seats in the National Assembly—harangues large crowds with a racial pitch, encouraging the seizure of land, including seizure of farms owned by white South Africans. At present, farmland is not being seized, but the murders of white farmers continue. Sometimes the farm family is tortured before being killed. Malema, who calls the whites “cry babies,” enjoys the patronage of Lord Robin Renwick and the Royal Institute of International Affairs.

A right-wing Afrikaner organization, Suidlanders (Southlanders), is preparing to fight in a racial “Armageddon” in South Africa. It has sent its spokesman, Simon Roche, on tour in the United States to raise money for his organization. 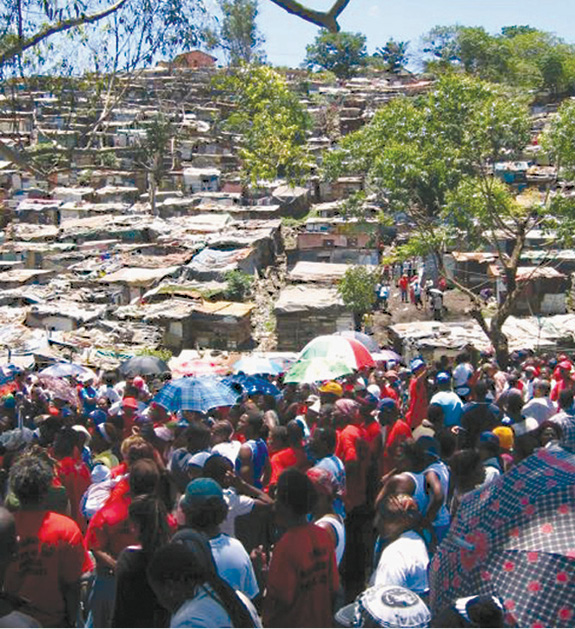 In contrast, the largest association of shack dwellers, Abahlali baseMjondolo (AbM), led by its president, S’bu Zikode, is committed to nonviolence, and has repeatedly urged the government to make land available. Many of AbM’s leaders have been assassinated—killings that are often paid for by property developers. But the call for land is not the right demand. It is not enough, and by itself it will feed into British intentions. AbM’s leaders understand that land is not simply a market commodity; they should be asking for a larger, more comprehensive change in the economy (see my statement, “Will South Africa Destroy Itself, While the Bitch Queen Laughs at Our Stupidity?” immediately following this article).

This is all grist in the British imperial mill. The British plan is to use tumultuous disorder and bloodletting as the pretext for a multi-party “government of national unity and peace” that they can control. While South African commentators are talking about a coming “Arab Spring,” it would actually be a bloodbath.

GCIS
Above, Julius Malema, leader of the Economic Freedom Fighters, speaking at the 2018 State of the Nation Address debate in the National Assembly, Cape Town, Feb. 19, 2018. Below, Malema with Lord Renwick.
View full size 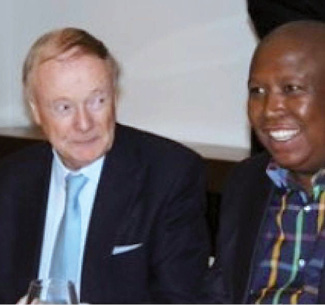 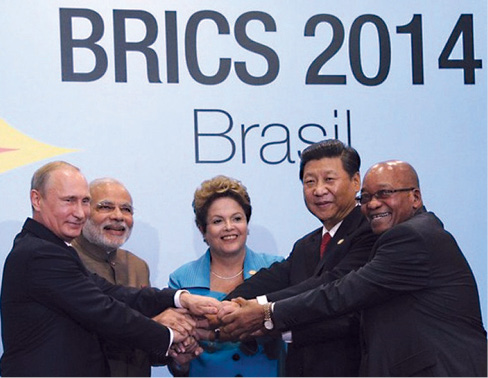 South Africa is the chair of the BRICS this year by rotation, as it was five years ago in 2013. The BRICS annual summit of heads of state and government—and associated events—will be held in Johannesburg, July 25-27. Nine other African governments will participate, along with Argentina, Indonesia, Jamaica, and Turkey, under the “BRICS Plus” concept. The BRICS association must accelerate its work for the sake of Africa and the world. Obama, his foundation, and his partners in crime—the Soros Open Society Foundations—must be exposed and defeated.