Opens Door for U.S.A. and Europe To Join the New Paradigm

July 3—The timing could not have been more propitious for the June 30-July 1 Schiller Institute conference on, since it occurred as momentum is building for the consolidation of a New Paradigm, driven by the diplomatic and economic policy direction defined by China’s Belt-and-Road Initiative (BRI). Monumental shifts have taken place in the last months, which are moving a growing number of nations into a new strategic geometry centered around a U.S.-Russia-China alliance, which is emerging in spite of massive resistance from British and U.S. networks acting to preserve the old, dangerous world defined by geopolitics.

The goal of consolidating this new constellation of forces has been the life’s work of American statesman Lyndon LaRouche, and his wife Helga Zepp-LaRouche, the founder of the Schiller Institutes, and President of the Schiller Institute in Germany, as this new geometry represents a force more powerful than that deployed by the City of London/Wall Street networks, which run the imperial forces clinging to the old, collapsing paradigm.

China and Russia worked with U.S. President Trump, along with Prime Minster Abe of Japan and South Korea’s President Moon, to pull together the successful June 12 summit in Singapore between Trump and North Korea’s President Kim Jong-un, which demonstrated the power of this new alliance.

The success of the Singapore summit helped pave the way for the summit between Trump and Russia’s President Vladimir Putin, which will take place in Helsinki on July 16. In addition to the Trump-Kim summit, there were other events which make up parts of this picture, including the Shanghai Cooperation Organization (SCO) conference, which opened June 10 in Qingdao, China. The close collaboration between Putin and China’s President Xi Jinping was a central feature of the deliberations there.

As these events proved the promise inherent in these changes, institutions of the collapsing old paradigm showed themselves to be obstacles to this new dynamic. The Toronto G-7 summit was left in a state of stunned paralysis when Trump walked out and headed for his Singapore rendezvous with Kim, after provoking its members by demanding a return of Russia to the G-8. And the European Union was left floundering, unable to patch together any positive solution to the “immigrant” crisis or to their own economic disintegration, while many EU members are now looking toward cooperation with China and the BRI as a way out of the EU’s existential crisis.

These developments prompted an intervention by Mrs. LaRouche, who drafted a memo on June 17, “History Is Now Being Written in Asia: The EU Summit Must Follow the Example of Singapore.” It called on EU member states to adopt the spirit of the Singapore summit, and of the organizing process which created it, to be able to overcome the ongoing failures dominating Europe. It was circulated widely, in many languages, and distributed to governments and institutions, posted on blogs. It began to shape the debate in Europe, as it offered an alternative to what Mrs. LaRouche described as barbaric proposals coming from many EU leaders. 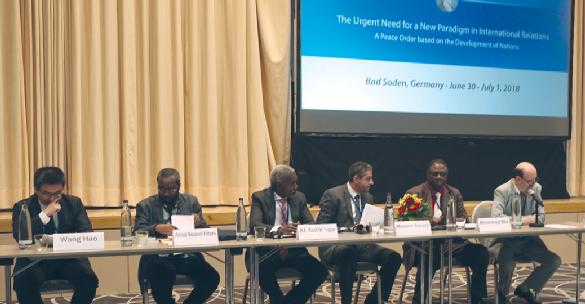 The approach proposed by Mrs. LaRouche was the central topic at the Schiller Institute conference, which was held outside of Frankfurt, Germany, in Bad Soden. In her keynote, she reiterated this theme in her powerful presentation which challenged participants to join with her in organizing for the New Paradigm in global strategic relations.

She opened her speech with the words, “After the very historic summit which surprised the world, between President Trump and Chairman Kim Jong-un, I made a proposal that the EU adopt this model, which shows that you can turn an adversarial relationship—as a matter of fact, we were on the verge of a potential global war—into its total opposite, into cooperation, if there is good will and if there is collaboration of the large powers, in this case, the United States, China, and Russia, which all worked in the background to help make this summit possible. So I proposed that the agenda at the just concluded EU summit should have only one point, namely the development of Africa through the New Silk Road, and that the EU should invite China’s President Xi Jinping and about six or so heads of state of African nations which are already cooperating with China, to announce a joint crash program for the industrialization of Africa through the extension of the New Silk Road to all of these states.”

While she acknowledged that the EU summit, which convened June 28-29, did not take up her proposal at that time, there is no alternative, she said, if Europe is to survive. This has become clear to a growing number of Europeans, who are voting in nation after nation to reject the incompetent and in some cases evil policies being put forward by their leaders, who are defending the status quo.

In the pages which follow, you will be able to read the speeches which followed that keynote, to see for yourself the quality of deliberation, and the passion of the participants for bringing about a successful transformation to the New Paradigm. Included were speakers and guests from China, Russia, the United States, Africa, and a number of countries in Europe—including Germany—who have “caught the New Silk Road Spirit,” and are united in their commitment to spread it to their fellow citizens. As Mrs. LaRouche has repeatedly argued, this process will not be stopped, unless its London-centered opponents destroy the human race through genocidal wars, including possibly nuclear war. Once people grasp the beautiful idea of the potential which exists in every child, no matter how poor they may be, or where they were born, there will be an unquenchable desire to organize governments to act to protect and develop that potential.

The example of Singapore proves that such an era is now within our grasp.