This transcript appears in the July 20, 2018 issue of Executive Intelligence Review.

An Assault on the HumanCreative Personality

This is an edited transcript of a presentation given by Hector Villarreal on June 23, 2018, to a Schiller Institute meeting in Detroit, Michigan.

I want to address the opioid epidemic and the fight around the legalization of drugs from the standpoint of Lyndon LaRouche’s economics, and his concept of human culture. I want to start by reading a quote from our pamphlet, “America’s Future on the New Silk Road”:

Every infant born in any part of the world, has the potential for the development of his or her own mental powers to the level sufficient for a direct, competent use of modern technology. It is that potential development which is the only source of wealth. There is a hospital in Huntington, West Virginia, the Cabell Huntington Hospital, in which 1 in 10 babies born there is born addicted to some type of drug. In this economically devastated region of the country, that rate of babies born addicted is 15 times the national average.

In Ohio, the epicenter of the opioid crisis, the number of heroin overdoses rose 20% between the years 2015 and 2016. This is just in Ohio. Over the last seven years, the Public Children Services Association of Ohio (PCSAO) reported a 19% increase in the number of children taken into custody, due largely to the parents’ addiction to heroin and painkillers. According to an article recently published in The Hill, over the last four years, the number of children being brought into foster care due to drug-addicted parents has increased upwards of 30% nationwide.

So, the legalization of illicit drugs, the monetary benefit from them, or even the mere tolerance of them is a crime against humanity, whether that be cocaine, marijuana, or others mind-numbing drugs. When taken from the highest epistemological standpoint—and that is the standpoint of Mr. LaRouche’s economics—and from the standpoint of the value of each human mind, such a crime against humanity must not be tolerated.

That may sound radical to some people, but that’s what it is. In fact, America from its inception demonstrated this very idea. And China is demonstrating it right now. So, if this first quote I read by Mr. LaRouche is truthful, then the arguments for such legalization or toleration of drugs will dissipate.

Let me just re-read that first quote again with another, prefatory quote:

We hold these truths to be self evident, that all men are created equal.

Every infant born in any part of the world, has the potential for the development of his or her own mental powers to the level sufficient for a direct, competent use of modern technology. It is that potential development which is the only source of wealth.

Therefore, to accept the use of mind-altering illicit drugs is to diminish your workforce, diminish its skill level and ability to operate machinery, and all other kinds of actually human labor. Even more important is the diminishment of each person’s creative potential to make new discoveries, to assimilate those discoveries and to transfer them to future generations, which Mr. LaRouche would say is the substance of immortality, the role of a nation-state.

It is that creative identity of mankind which was intended to be destroyed with the paradigm shift of the 1960s. The assassinations of the Kennedy brothers, Martin Luther King and Malcolm X, the deindustrialization policy and the drug policy were actually all one process, aimed at destroying that creative capability of the American people. We’ve documented thoroughly that this operation was carried out by high-level thinkers within the British Empire, as well as their allies within the CIA and FBI. Some of these facts are actually well known. I won’t go into detail in this presentation; I just want to highlight one quote from one of the British architects of the Sex, Drugs and Rock n’ Roll counterculture.

This is what he said to a medical group in San Francisco, in the early 1960s:

There will be, in the next generation or so, a pharmacological method of making people love their servitude, and producing a dictatorship without tears, so to speak, producing a kind of painless concentration camp for entire societies, so that people will in fact have their liberties taken away from them, but will rather enjoy it, because they will be distracted from any desire to rebel by propaganda or brainwashing, or brainwashing enhanced by pharmacological methods. And this seems to be the final revolution.

The drug issue, as I’m trying to pose it here, is not an issue of drugs, but rather culture. In as few words as possible, we can describe culture as how society deals with problems. How does it deal with injustice? Does it disassociate itself? Does it dive into the escapism of drugs or entertainment? Does it seek pleasure and avoid pain? Or, does it confront problems directly and attempt to overcome them creatively? In other words, is it a scientific approach?

I want to give an example in American culture, a culture that was once steeped in classical culture. It was not perfect then, but it did exist and it was not what we have now. 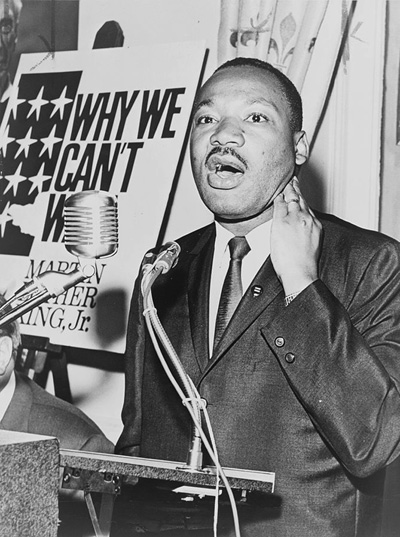 In 1963 Martin Luther King and the Southern Christian Leadership Council were on a campaign to end segregation and racial injustice. Martin Luther King was invited to Birmingham because Birmingham was the most racially segregated city in the United States. The objective was to bring national attention to that fact through the use of nonviolent direct action. King and about fifty others were arrested the day of the rally for failure to have a permit. You may think that he drew approval and praise. In fact, he drew criticism. He drew criticism from many of the local Jewish and Christian leaders. He was attacked as an outside agitator, whose actions were unwise and untimely. He was notified of this criticism as he sat in a Birmingham jail, and he penned his famous letter there. I want to read a small section of his response:

You may well ask, “Why direct action? Why sit-ins, marches, etc.? Isn’t negotiation a better path?” You are exactly right in your call for negotiation. Indeed, this is the purpose of direct action. Nonviolent direct action seeks to create such a crisis and establish such creative tension that a community that has constantly refused to negotiate is forced to confront the issue. It seeks so to dramatize the issue that it can no longer be ignored. I just referred to the creation of tension as a part of the work of the nonviolent resister. This may sound rather shocking. But I must confess that I am not afraid of the word tension. I have earnestly worked and preached against violent tension, but there is a type of constructive nonviolent tension that is necessary for growth. Just as Socrates felt that it was necessary to create a tension in the mind so that individuals could rise from the bondage of myths and half-truths to the unfettered realm of creative analysis and objective appraisal, we must see the need of having nonviolent gadflies to create the kind of tension in society that will help men rise from the dark depths of prejudice and racism to the majestic heights of understanding and brotherhood. 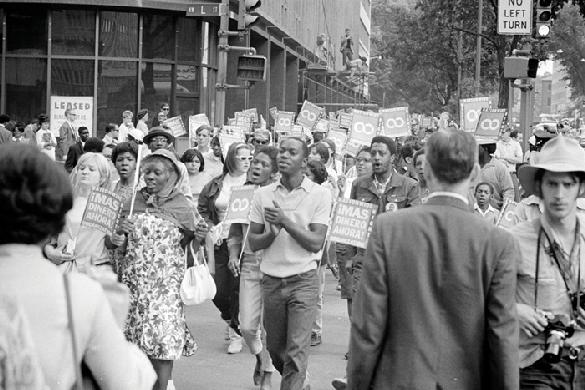 King did not stop at civil rights, but he went beyond what others were willing to do and continued his fight for economic justice for all, for not just people in the South but for the country and the entire world. It was called the Poor People’s Campaign. Another champion of economic justice, Robert Kennedy, was assassinated—along with King—within a two month period in 1968. The country then collapsed into deep cultural pessimism and drug use, which were being flooded into the country.

This crisis of drugs, deindustrialization, and pessimism is today all-pervasive. This is what Sam Quinones notes in his book Dreamland: that the opioid epidemic leaves out no demographic, young, old, rich or poor, white or black. Everyone here should have received a copy of the Dreamland book review we published in EIR; it is a very good summary of the book. Quinones details the campaign of Big Pharma, which lied to the public and medical community, saying that these opiate painkillers were not addictive. They started their campaign by corrupting large sections of the medical community in order to get the over-prescription of opioids accepted, and then began marketing these highly-addictive drugs in areas that had been destroyed economically, because the people there were the most vulnerable. This laid the basis for the epidemic. 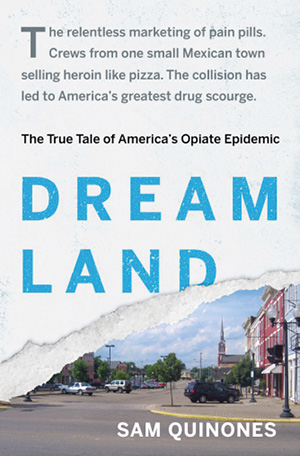 It’s an interesting story, which shows how these large, prestigious pharmaceutical companies converged on the Midwest, together with the brutal Mexican cartels, in order to infect America’s heartland. It’s a riveting story, but I want to point out the insights that Mr. Quinones developed in writing the book. He notes that important values have been lost in this process. Those values being a sense of productiveness, the value of creative participation in strengthening community and government, and the ability to work through stress and pain for the sake of something better for future generations.

Mr. Quinones testified on this very issue before the Senate Health, Education, Labor and Pensions Committee this last January. He presented his findings in the book and provided his solution. I want to end with what he said there.

View this as an opportunity to revive those regions hammered by globalization and free trade. The roots of our national epidemic of narcotic addiction lie there, while the epidemic itself, in turn, stands in the way of their revival.

I believe American history offers us two templates for actions, from which you might take guidance and inspiration. The first is the Marshall Plan to rebuild Europe after World War II. The second is our space program. Each involved the government and the private sector acting in concert over many years, bringing money, brains, energy, and of course long-term focus to bear. Each achieved an unalloyed good for our country; although they were both things that seemed, at first blush, far beyond our own, short-term self interest.

The Marshall plan was about building up ravaged regions to allow them to function independently. . . . it allowed reborn countries to prosper and contribute to the world again. A Marshall Plan for American recovery might focus on rebuilding those regions that have been caught in dependence on dope, and ravaged by economic devastation, to contain the viral spread of addiction. Through our space program we were inspired as a people, to spend years and dollars, all to achieve something no previous generation ever thought possible. We ended up far beyond the Moon. The spillover in economic benefit, increase in knowledge, and simple human inspiration, is beyond calculation.

It seems to me that we might profitably apply these examples—the Marshall Plan, and the space program—to regions of forgotten Americans where this addiction problem began. Let’s do it, not because it is easy, but as JFK said, because it is hard; because that’s what Americans do, and have always done, at their greatest.

Like our space program, I believe such an effort will have to last for years to be effective, focused far beyond the immediate goal of drug addiction, and on the more profound problems of community destruction and the hollowing-out of stretches of this country.

It offers an opportunity to reinvest in areas that need it most, a chance to inspire us as Americans again, to something great. . . . Do not miss this opportunity. It does not come around often. . . . You will be remembered for acting, when acting was not easy to do.