This article appears in the August 17, 2018 issue of Executive Intelligence Review. Ercole Incalza was responsible for the General Transportation Plan approved by the Italian government in 1986, and updated in 1991. He has been active in the transport sector for thirty years, including being the CEO, for seven years, of Italy’s high speed TAV (Treno Alta Velocità) rail service, and a key person in the creation of high-speed rail in Italy. After 2000, Incalza was involved in the European Union’s TEN-T (Trans-European Transport Network), an integrated system of road, rail, air, and water networks on a European-wide scale. From 2008 to 2014, he was the head of the Italian government task force for carrying out its Strategic Infrastructure projects.

Mr. Incalza published the following report on his blog stanzediercole.com on Aug. 10 and authorized its reproduction in EIR. This is an edited translation.

Aug. 11—To understand how the Mediterranean Basin has matured, over the last forty years—from being a geographic center of strategic importance into being a key economic area for the growth and development of a new system encompassing the whole planet—we need to carefully review the evolution of the programs and plans made beginning in 1985.

Italy, during its tenure as the rotating chairman of the European Union (EU) in 1985, proposed a Master Plan for the transport system of the entire EU community (at that time composed of only twelve states). The proposal was accepted and approved by the European Council. We review here the very interesting future directions for such systems proposed then, and the conclusions of this early programmatic tool. There were four project areas:

In 1994, Henning Christophersen, then European Commissioner for Economic and Financial Affairs, made the first large-scale proposal consistent with Italy’s proposed Master Plan, outlining the infrastructural priorities of the transport sector in the European Union and identifying nine Pan-European Corridors—multimodal road-railway infrastructure corridors that would connect the western and eastern parts of the European Union, the east being then an area which did not yet include EU members. Two of the proposed corridors would go through Italy—the Verona-Munich axis and the Trieste-Kiev axis. Christophersen’s proposal clearly acknowledged that the Mediterranean was becoming more and more relevant to the growth and development in a new European Union. Beginning then, an organic planning process of the entire EU arrangement was initiated and it has, in fact, never stopped. In this regard, we cannot but remember EU Transport Commissioner Karel Van Miert’s oft repeated words: “The European Union is similar to a very slow moving train which however never stops.” Certainly, the process that led to the current structure has been a long one and it has gone through two additional, distinct programmatic versions. The first was outlined in the 2004 TEN-T Networks document, and the second in the 2012 TEN-T paper. The latter made the plan more effective with a greater, and well-motivated, strategic approach because it was not limited to the rail and road corridors, but also identified the metropolitan and logistic junctions (ports, airports, interports) of the entire EU system, a system which, by 2012, was composed of 28 countries.

The Mediterranean Basin is the common denominator of these programmatic and strategically focused steps and is the strong center of a large economic theater of action which, year after year, is becoming more important as the pivot between the economic systems of Europe and the African continent. It is important to note that the following four—of the nine EU Corridors as defined by the European Union’s TEN-T Network 2012—run through the Mediterranean Basin region and Italy:

• Mediterranean Corridor: A Southern axis running from Algeciras in southern Spain through France and Northern Italy, to Hungary and Ukraine.

• Scandinavian-Mediterranean Corridor: A North-South land and sea axis going from the Baltic Sea, starting at the Finnish-Russian border, through Sweden to the European mainland and then to Germany and Italy, connecting to Malta through Sicily.

• Rhine-Alpine Corridor: A North-South infrastructural axis going through some of the most industrialized and heavily populated regions in Europe, going from Rotterdam and Antwerp on the North Sea to the Port of Genoa on the Mediterranean Sea. Strange as it may seem, the TEN-T Networks would have been limited in scope to a Europe-only scheme, remaining disconnected from the economies of the African and Asian continents, were it not for a programmatic idea that arose and overcame every provincial or fractured local plan, every short-sighted passion for some particular logistical concern. That really revolutionary intervention was, and is, China’s One Belt One Road, the New Silk Road, a project that is building an increasing interaction among Europe, Africa and Asia, and which, up to a few years ago, had not yet been linked by a functional logistics system.

The One Belt One Road initiative is not a banal declaration of intent. We have, with this extended project, an organic plan for land and sea connections. In fact, the “belt” component of the Belt and Road Initiative was publicly announced by Chinese President Xi Jinping in September 2013, and the “maritime road” component in October of the same year. At the same time, China put forward the proposal to create the Asian Infrastructure Investment Bank (AIIB) with a capital of $100 billion. This strategic evolution, which was really unthinkable just a decade ago, is an organic part of the evolutionary growth of the entire Mediterranean Basin, in which Italian ports can play a key role, and it urgently demands an act of intellectual humility: We must therefore not only master this new language of logistics, but we must evaluate, in depth, all management approaches that for many years have proved inadequate for the needs of evolving demands. 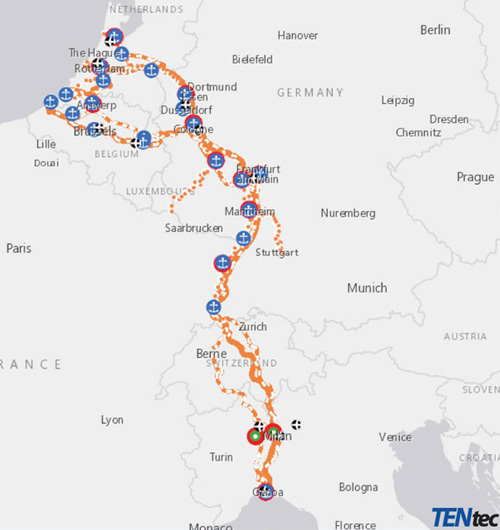 The new system is wiping out the old dichotomy between North Sea and Mediterranean ports, as well as the useless competition among Italy’s own ports. It is creating new alternative connections between China and Europe and is creating a measurable competition between sea transport and land rail transport, using the latest technological generation of container ships (with capacities of up to 20,000 containers) as an instrument to optimize logistical processes.

Facing this new reality of the Mediterranean Basin, these new forms of approach to “logistics” through what we call the “supply chain”—the organic management of the entire production chain and the distribution of products—the approach of the current Italian government in reviewing some strategic choices, appears to be truly mediocre and provincial. Such a short-sightedness is so serious that it could irreversibly marginalize our country and alienate it from this epochal process of growth.

When, in our old ways, we finally understand how irresponsible such a choice was, will it not then be too late?