New Opera Production in the Verdi Tuning with a Furtwängler Touch 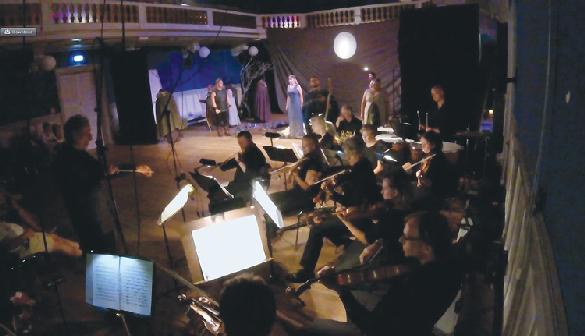 Performance at 432 Hz of finale “Qual cor” of Norma, Act 2, by Vincenzo Bellini, in Helsingör, with Jochen Heibertshausen conducting.

Sept. 3—In July and August of 2018, the Swedish opera company “Operafabriken,” led by Swedish soprano Leena Malkki-Guignard, set out to create a unique stage performance of Vincenzo Bellini’s 1831 opera Norma, performed in the scientific pitch of A=432 Hz, known as the Verdi tuning. It was performed twice at the Ystad Theater in Sweden, twice at the Helsinore Theatre House in Denmark, and once at the Malmö Palladium in Sweden. The production was the first stage performance of Norma in the Verdi tuning outside of Italy since the Second World War.

Malkki-Guignard brought in German conductor Jochen Heibertshausen and Italian violinist Gian Marco Sanna, to allow these artists to add their special insights and talents to the project. All three had come to know each other through the Schiller Institute Verdi-tuning campaign and had recently performed together at the Schiller Institute conference in Bad Soden, Germany. Heibertshausen has worked to grasp the general musical understanding of Wilhelm Furtwängler and has applied Furtwängler’s conducting method in practice. Sanna leads the Geminiani string ensemble, in London, which plays exclusively in the Verdi tuning of A=432 Hz. The production, though on a small budget, was fully staged, complete with scenery, costumes, and lighting. It was performed with a chamber orchestra of thirteen musicians. A video of the overture is available. Malkki-Guignard sang the title role, Norma. The rest of the cast consisted of singers from Sweden and Denmark, and one singer from Georgia.

The whole project was designed to be a great learning experience. It provided a significant challenge to all the musicians and was for some, perhaps, a cultural shock. The Verdi tuning gave the singers the freedom to perform without forcing their voices and gave the orchestra a rounder and less piercing sound. Scientific research indicates that the tuning of the instruments to C=256, or approximately A=432, aligns the voice with the natural harmonics of the human singing voice.

Heibertshausen added yet another dimension. He wanted people to understand the Furtwänglerian approach. Furtwängler never conducted in the “point” but rather he conducted the preparation of the note. With that mode of conducting, the musicians do not react to impulses but are rather breathing and acting in the same moment as the conductor. That gives the conductor the ability to shape the music spontaneously; however, it requires the utmost attention from all players. Nothing essentially is mechanical. Furtwängler’s demand as to the orchestral sound—as introduced in the opera performance by Heibertshausen—proved to be a great challenge. With this attention to the preparation, comes also care that each note be played in a singing way, all the way through. Singing—meaning bel canto with vibrato and depth, even in soft passages. It took the musicians a long time to unlearn some of their own performing habits, but when they all came together with this method, the small chamber orchestra sounded much bigger. There were moments in the music that one can only describe as something that could not have been rehearsed.

The confusion and challenge posed by this method came not just within the production but also afterwards in response to a video that was posted on Facebook of a clip from of the performances. A viewer complained in a comment that the sound of the orchestra came before Heibertshausen’s downbeat, saying that he was treating the orchestra as if it were a mirror. A fair answer, I believe, is given by Dr. Hans Keller who, in a short film about Furtwängler, comments on critics’ view of Furtwängler as being imprecise: “The criticism is justified but the evaluation isn’t.” Indeed, this apparent mirroring is the shaping of the music by the conductor and the orchestra in the same moment, which looks at times as if the orchestra is ahead of the conductor—something that would appear to be impossible in music making. But it is rather like a performance of a string quartet, in which all four players are completely together and yet, still can create in the spur of the moment.

For the opera singers and the musicians, it took four performances before this approach had firmly settled in with the performers. It was then, at that fourth performance, that pure magic moments arose, which made one think of those sonorous and organic recordings of Furtwängler.

This opera project was a good start for what one can describe as a more truthful and scientific striving towards beauty in Classical art, and there will hopefully be much more to come from these bold musicians. 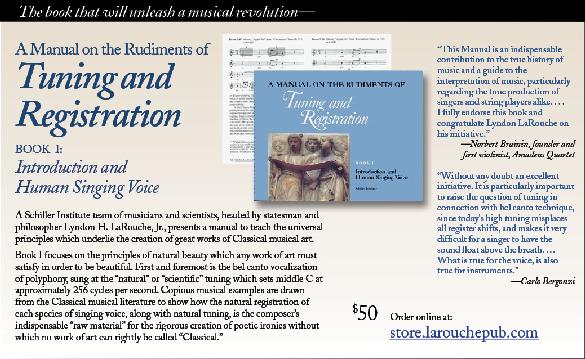 Buy A Manual on the Rudiments of Tuning and Registration (DVD)