This article appears in the September 14, 2018 issue of Executive Intelligence Review.

Africa Joins the Belt and Road 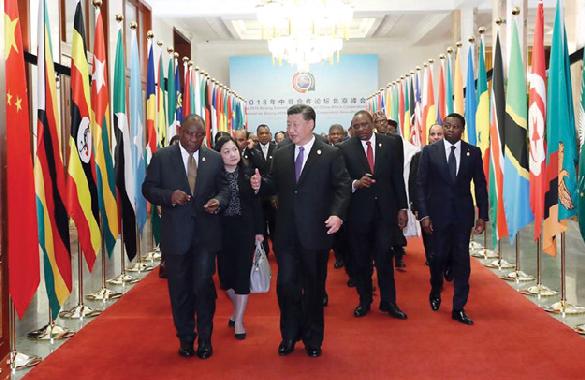 Xinhua/Pang Xinglei
Chinese President Xi Jinping and African leaders on their way to the opening ceremony of the Forum on Africa-China Cooperation summit, at the Great Hall of the People, Beijing, China, Sept. 3, 2018.

Sept. 5—No doubt, to the great chagrin of the representatives of the British empire and their minions in the mass media, a grand contingent of African leaders gathered in Beijing on September 3-4 for the summit of the Forum on China-Africa Cooperation (FOCAC). There the African nations made a commitment to become a “full and integral” part of China’s Belt and Road Initiative. Representatives from 53 African nations—including forty heads of state, ten heads of government, and one deputy head of government—were in attendance, as well as 27 representatives of international organizations, including the Chairman of the African Union, Paul Kagame, and the Secretary General of the United Nations, Antonio Guterres. There were also 240 ministerial-level representatives among the 3,000 people in attendance at the summit.

More importantly, the growing synergy between the development plans of China and Africa has also created an important nexus of political influence for the nations of the developing world, who will now have a greater say in determining the course of history. President Xi focused on this important element in his keynote on Sept. 3:

To respond to the call of the times, China will get actively involved in global governance and stay committed to the vision of consultation, cooperation, and benefit for all in global governance. China has all along played its part in promoting world peace and development, and upholding the international order. We call for increasing the representation and voice of developing countries in international affairs and [we] support efforts to strengthen the South, a weak link in the global governance system, as well as efforts to create synergy in South-South cooperation. We will continue the efforts to make the global governance system better represent the will and interests of the majority of countries, especially developing countries. 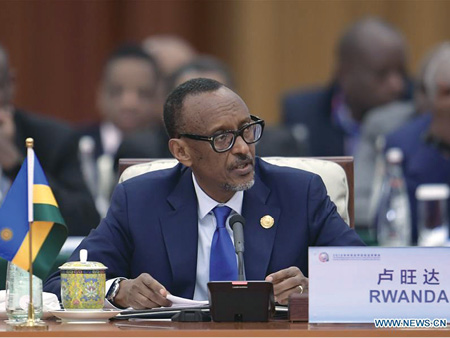 Central Role of the Belt and Road

Central to this collaboration is the Belt and Road Initiative, which serves today as the premier model for development for a world still plagued by poverty and financial crises. The whole-hearted commitment of the African countries to this program serves to promote the development of the continent, which has been so long neglected by the Western nations. Speaking as the Chairman of the African Union, President Paul Kagame of Rwanda, expressed the will of Africa very clearly: “Africa wishes to be a full and integral part of the Belt and Road Initiative.” And in spite of the myriad attacks in the Western media regarding the Belt and Road’s alleged “debt trap”—and its description of China’s extensive involvement in Africa as a “new colonialism”—this “fake news” has not blurred the vision of Africa’s leaders, who have stayed focused on the future of the continent. 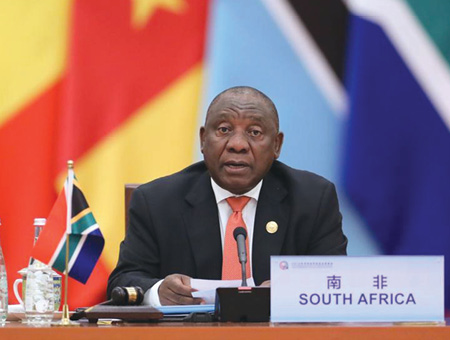 These “debt trap” accusations were categorically refuted at the very beginning of the summit by South Africa’s President, Cyril Ramaphosa, the African co-chair of FOCAC, in his opening speech:

In the values that it promotes, in the manner that it operates, and in the impact that it has on African countries, FOCAC refutes the view that a new colonialism is taking hold in Africa, as our detractors would have us believe. It is premised on the African Union’s Agenda 2063, a vision that has been crafted in Africa, by Africans. It is a vision of an integrated, prosperous, and peaceful Africa, driven by its own citizens and representing a dynamic force in the international arena.

Because we are confident that this initiative, which effectively complements the work of FOCAC, will reduce the costs and increase the volume of trade between Africa and China. It will encourage the development of Africa’s infrastructure, a critical requirement for meaningful regional and continental integration.

While the relationship of the People’s Republic of China with Africa goes back 50 years to the visit of Zhou Enlai to Tanzania in 1955, it was only in 2000 that China established the Forum on China-Africa Cooperation (FOCAC) at a founding summit in Beijing. China had by then come a long way on its own path to modernization, and was beginning to play a major role as an engine for global growth. It was China’s wish to share its development with the other developing countries. China’s commitment to the “Third World”—as it used to be called—was always heartfelt and strong.

China also has refused to use its aid as a means of compelling these nations to change their political systems. Each of these countries has a different history and a somewhat different political structure. In contrast to the Anglo-Dutch imperial system, which has always placed political and economic “conditionalities” on its aid, China allows each country to develop in its own way and at its own pace. This was underlined by President Xi in outlining the five “No’s” of China’s foreign policy towards Africa, namely: “No interference in African countries’ pursuit of development paths that fit their national conditions; no interference in African countries’ internal affairs; no imposition of China’s will on African countries; no attachment of political strings to assistance to Africa; and no seeking of selfish political gains in investment and financing cooperation with Africa.”

At this point, China has become a major factor in Africa’s development, having initiated more than 3,000 critical infrastructure projects on the continent, in the form of railroads, roads, dams, ports, and airports. Between 2000 and 2014, China and China-connected institutions have issued $86 billion in commercial loans. At the moment there are over 10,000 Chinese firms which have invested in Africa, or are working on Chinese-funded projects, creating over 900,000 jobs for Africans. 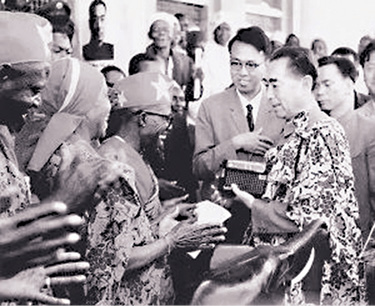 At the Johannesburg FOCAC summit in 2015, President Xi had introduced ten cooperation plans for Africa and committed $60 billion to implement them. Those ten plans were for industrialization, modernization of agriculture, infrastructure, financial services, green development, trade and investment facilitation, poverty reduction, public health, people-to-people exchanges, and peace and security. President Xi announced at the Beijing summit that the promised $60 billion had all been distributed to a variety of important projects. In the same speech, Xi announced that China is now prepared to upgrade the strategic partnership with the African countries, further integrating the Belt and Road Initiative with the African Union’s Agenda 2063 development roadmap.

To build an even closer China-Africa community with a shared future in the new era, China will, on the basis of the ten cooperation plans already adopted, launch eight major initiatives in close collaboration with African countries in the next three years and beyond.

Among the eight is an industrial promotion initiative. China will open a China-Africa economic and trade expo to promote investment in Africa. This initiative is geared to helping transform Africa from a predominantly raw materials exporter, into a producer of manufactured goods. While agriculture still weighs heaviest in African production, much effort will be put into modernizing it. Said Xi:

We will support Africa in achieving general food security by 2030, [and] work with Africa to formulate and implement a program of action to promote China-Africa cooperation on agricultural modernization. . . . We will implement 50 agricultural assistance programs, provide RMB 1 billion [$150 million] of emergency humanitarian food assistance to African countries affected by natural disasters, send 500 senior agriculture experts to Africa, and train young researchers in agri-science and entrepreneurs in agri-business.

Secondly, China will promote an infrastructure connectivity program for the continent as a whole, worked out in conjunction with the African Union Agenda 2063 program. Thirdly, China will launch a trade facilitation initiative, promoting the import of manufactured products from Africa. Fourthly, China will launch a green development initiative, which will include programs for pollution prevention, desertification prevention and control, and wildlife protection. Fifthly, China will set up a capacity building initiative, which will include vocational training for young Africans. It will include the opening of an innovation cooperation center, focusing on youth and training 1,000 qualified young people for entrepreneurship in innovative industries. China is also committed to inviting 2,000 young Africans to China and will establish 50,000 government scholarships for training in Africa.

Furthermore, China will continue to move forward in the area of health care, upgrading 50 medical and health aid programs, Chinese health programs having already treated 460,000 patients in Africa. Most importantly, China will continue its peace and security initiatives, providing military aid to the African Union and supporting countries in the Sahel region, and those bordering the Gulf of Aden and the Gulf of Guinea, to uphold security and combat terrorism in those regions. China has already set up a Peace and Security Fund and a Peace and Security Forum with Africa for this purpose and is involved in combat roles in UN peace-keeping operations in Mali and South Sudan, and in non-combat medical and engineering roles in many other UN Peacekeeping operations in Africa.

Debt for Development Is No ‘Trap’

In order to realize these programs, Xi said, China is prepared to commit a further $60 billion in the next three years, which would be divided up into the following categories: $15 billion of interest-free and concessional loans, $20 billion of credit lines, a $10 billion special fund for development financing, a $5 billion special fund for financing imports from Africa, and encouraging investment by Chinese firms to a level of another $10 billion.

While this again will raise hackles from the Western media over China’s alleged “debt trap,” China is quite prepared to meet this hoax head-on, as occurred on Sept. 4 at a press briefing with Xu Jinghu, the Special Representative of the Chinese government for African Affairs. Typically, Reuters News Agency, that long-time mouthpiece of British Imperial pretensions, posed the “debt” question.

Xu calmly went through the eight new initiatives and pointed out the beneficial effects these would have for the African people. She noted that Africa is in “the ascending phase” of its development and “faces a gap in the funding for all of these endeavors.” “Africa needs capital development, and the African economy and the Chinese economy, which is more developed, are therefore complementary,” she explained. Then she went into the real causes of the “debt trap” Africa may face, “You have to take into consideration the international situation. The costs of financing for development on the international market have become very expensive and most of the African countries are still dependent on exporting their raw materials. And the price of these has fallen. That has increased the debt of African countries a great deal.”

She encouraged her Reuters interlocutor to “look closely at the African countries with the greatest debt burden and you will see that their debt is not with China.” “Chinese help,” Xu underlined, “is aimed at advancing Africa’s development, not its debt accumulation.”

Speaking at the concluding press conference, both President Xi and his African co-chair made clear that this all-important summit marked an historic watershed toward a community of shared future for mankind. Xi said:

Together we will better uphold the common interests of China and Africa, boost the strength of developing countries, and make the world a more balanced and better place for everyone to live in. The forum was established 18 years ago. The successful hosting of the Beijing summit has brought China-Africa comprehensive strategic and cooperative partnership to a new historic starting point, and on a new journey.

In addition to the two days of intense discussion, President Xi met separately with all the government leaders who had attended, shoring up personal ties with those individuals who will be instrumental in making the FOCAC vision a reality. More than 150 joint agreements were signed in the course of the summit, including those on the joint construction of the Belt and Road. The summit issued two documents, the “Beijing Declaration—Toward an Even Stronger China-Africa Community with a Shared Future,” and an Action Plan for the next three years.