This article appears in the September 14, 2018 issue of Executive Intelligence Review. 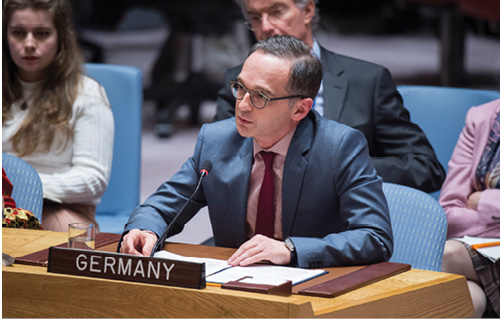 BERLIN, Sept. 4—At a two-day, high-level conference on the Lake Chad region, Sept. 3-4 in Berlin, 70 nations, international organizations, and civil society actors met to discuss humanitarian help, stabilization, and development cooperation for the Lake Chad region, one of the poorest areas of Africa. Organized by the German Foreign Office in cooperation with the Norwegian and Nigerian governments, participants in the conference pledged $2.17 billion in aid for the coming years, plus concessionary credits of $467 million. German Foreign Minister Heiko Maas, who opened the conference, said that Germany will contribute 100 million euros for the region by 2020 and 40 million euros for crisis prevention and stabilization, of which 30 million euros is a new commitment. In terms of development funds, Germany has contributed 220 million euros at present, with new projects in preparation. As of this writing, the projects for which the pledged sums are specifically to be used, are not known.

The Berlin conference, which was a follow-up to a 2017 Oslo event, heard reports from high-level representatives from Niger, Chad, Nigeria, and Cameroon, ministers and governors of the most affected regions, in addition to NGOs and international organizations such as the UNDP, World Bank, European Union, and African Union. Secretary General of the Lake Chad Basin Commission (LCBC) Mamman Nuhu, from Chad, was also a featured speaker at two sessions, addressing the strategic situation, the improved regional cooperation, and new responsibilities of the Commission, which has now become the main coordinator for regional and international contacts in the region. 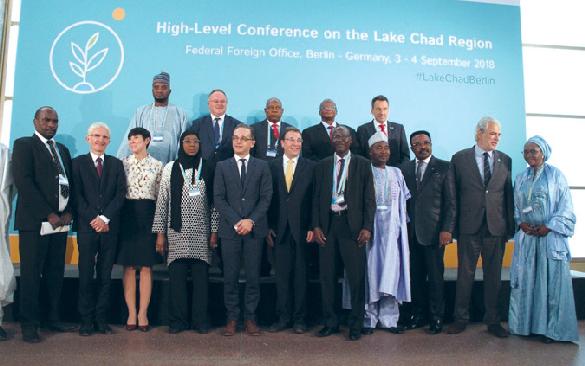 In the setting of this conference, however, the real game-changer for the future of the region, namely the proposed Transaqua project, was entirely left out and was clearly not wanted. Mr. Nuhu, the authoritative person for briefing the assembled international audience about this project, could only refer to “replenishing of the lake” at the end of his speech—on the panel about crisis prevention and stabilization—and he said, unfortunately, he had no time to discuss it.

And Günter Nooke, Commissioner for Africa of the German Economic Cooperation and Development Ministry, and advisor to Chancellor Angela Merkel, quipped, seemingly out of the blue, that the water from the Congo River does not solve the problems of the region. Instead he promoted private initiatives such as setting up businesses of one to three persons. He made these remarks in the afternoon plenum session on sustainable development, moderated by UNDP Administrator Achim Steiner.

Transaqua is the proposal, strongly backed by the Schiller Institute,[fn_1] for rebuilding and further developing the entire watershed of the region, and massively expanding desperately needed fresh water supplies. It has been identified as a model for successful African-European-Chinese cooperation, and Transaqua is precisely such a transformative project, which is coherent with the intention of the just-concluded FOCAC Summit in Beijing.

But the topic, and the reality, of the existing dynamic of win-win cooperation—with the FOCAC meeting taking place simultaneously with the Berlin conference—could not be entirely ignored, as EIR correspondents brought up Transaqua, both in the morning session of NGOs before the official opening, and in a special, afternoon briefing with Achim Steiner, one of the main organizers of the conference. Here is the transcript of EIR’s Stephan Ossenkopp’s question to Steiner, and Steiner’s answer during that briefing.

Ossenkopp: My colleague attended the Abuja Lake Chad conference in February of this year and was very enthusiastic, because they have adopted the Charter of Abuja, a roadmap, where they acknowledged that the entire crisis can only be solved by a major infrastructure intervention.

Eight heads of state, including the LCBC, put Transaqua into the roadmap, bringing water from the Congo to the Chad Basin. There is a joint venture already being set up by the Italian and Chinese governments for financing a feasibility study. This project can be built within 10-15 years. PowerChina is looking into the possibility of building it within 12 years.

I am wondering why this is not addressed at a high-level conference such as this? This could bring hope to the people, because humanitarian aid is always short-term and crisis-oriented. But a development perspective could mean a game-changer.

Steiner: Very briefly, all ideas are welcome, all partners are welcome. And this conference that we co-convened with Germany, Norway, and Nigeria, has its origins in a crisis which required a humanitarian response and has now become part of how in a broader way we can build out from that response to that crisis, to longer-term development. It is not—and that is why the Abuja conference happened as a free-standing conference—the only place where future development decisions are discussed. In that sense, I am aware of this project.

As you can imagine, the financial implications of this project [Transaqua] exceeds by the factor X the financial volumes we are talking about here. For us it’s not in the immediate realm of relevance, because it simply cannot be financed through the tracks that we can mobilize right now. But we also attended parts of the discussion. Whether you start with the basin transfers or whether you start with the restoration of Lake Chad, I think we will find that sometimes these very heavy infrastructure interbasin transfer schemes may in the long term prove financially viable or they may not prove viable. Damming the Congo River in order to produce power for the whole of Africa has existed as a project for the last 30 years. It’s simply. . . there are other factors that play a role.

But what I want to end with is to say: Look, there are already a number of other measures being taken to address the ecological restoration of Lake Chad. So you don’t have to spend billions to try to bring this lake back to life. You have examples like the Lake Faguibine in Mali, which had to be abandoned because of the civil strife. Lake Chad is today one-twentieth of what its size was in 1963.

This is significantly the consequence of developmental decisions that have been taken that can in part be reversed and that can be also compensated for with measures to restore at least parts of that lake. Wherein it is then financially, economically, and ecologically rational to invest in an interbasin transfer, is something that I am sure Transaqua will continue to promote as an option. And I think we will see whether the economics of it makes it attractive enough.

So the simplest way to say it, is: We have a whole range, a spectrum of interventions. We are at one end, the humanitarian plus development and stabilization. On the other end are mega-infrastructure interventions that may materialize in 5, 10 or 20 years.

That was Steiner’s response.

The official representative of the Embassy of China in Berlin had also spoken in the plenary session about the FOCAC meeting as an example of China’s commitment to help alleviate the problems of the region, and of its willingness to collaborate with all international actors to this effect.

[fn_1]. See https://schillerinstitute.com/extending-new-silk-road-west-asia-africa/ [back to text for fn_1]