This transcript appears in the September 21, 2018 issue of Executive Intelligence Review.

We Are Keen for Friendshipand Economic Partnership,No Matter How Difficult It May Seem 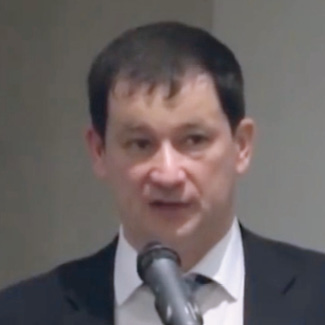 This is an edited transcript of remarks by Dmitry Polyanskiy, First Deputy Permanent Representative of the Russian Federation’s Permanent Mission to the United Nations.

Thank you so much! I’m really very honored to be here with all of you, discussing such important topics. Actually, we are discussing many of them in the Security Council. When you see very heated discussions, sometimes bordering on some insults, please don’t believe that anything is so bad, because in the corridors, we have normal human relationships. I think that we are committed, all of us, including our American colleagues on the Security Council, to do everything to avoid the consequences of some political moves that can be unpredictable, and to avoid confrontation and military confrontation among superpowers.

Things Aren’t Always What They Seem

You know, we’re living in a post-truth world, and a lot of things that are being said or done, or presented on TV or in the mass media, seem unrealistic, absurd, and they do not have very much in common with reality. It’s very much like our work in the Security Council: So, you see something on the surface, and you say, “Oh, come on, Russia is struggling with the United States, they’re not speaking with each other, they’re sort of trading insults.” But some things that are happening behind closed doors are more reassuring.

That’s why I think we need to wait a little bit and to make this period of our relations pass away, because we know that there are a lot of clever people in America. We don’t have problems with common Americans, they are very friendly, they are very intelligent, their attitude towards my country is very open, and we appreciate it very much. We have problems with some representatives of the political establishment—actually, almost all of them, [laughter] but that’s how it happens. There are a lot of things being said that are not linked to the things on the ground; so, the on-the-ground situation is better. Yes, we have very difficult, harsh times in Syria, but we’re still speaking with each other, and our military people are interacting. It’s about our relations with the United States.

There is another track which is very assuring: I think we have very much advanced in building our partnership with China. The Eastern Economic Forum in Vladivostok is ongoing right now, and there were very important meetings between our leaders; a lot of contracts are being signed. Some commentators and analysts are saying that this is really a genuine start of Russian-Chinese economic partnership, first of all because there are so many threats coming from this part of the world, vis-à-vis my country and vis-à-vis China, that inevitably, we have to adjust our policies, we have to close ranks. This is not a friendship against somebody, it’s sort of a win-win situation, as we see it.

We’re absolutely sure that, if I can use this metaphor, your country is a little bit ill for now, it’s like a flu, maybe, I hope. We think it will be cured in some point in time. We will wait, we will have good medicine for this. We give it step by step; we hope it will be efficient.

Do Not Abandon Hope

So, we do not lose hope, and we try to build a positive agenda. We still are very much keen on multilateralism. You will hear a lot of opinions in the coming weeks, when we have high-level week in the General Assembly of the United Nations. Not all of them will be coinciding in their messages, but I hope that most of them will be quite friendly, quite open, and in favor of multilateralism, in favor of friendship among people, and economic partnership. I think it will be for the benefit of those who follow us, of future generations, and that’s what we are keen to do, no matter how difficult it may seem.

And with your help, of course, I think we will move forward. Let’s not lose hope. Let’s hope for the better! I wish all of you good luck, success. Thank you. [applause]

I’m sorry I am not able to take any questions this time, but I really have to rush to another meeting. And the traffic is terrible in New York City, especially in this part, so I need to rush. Thank you very much.