Reconciliation and Rebuilding in Syria, as a Great Battle Looms in Idlib

This is an edited extract of remarks by Virginia State Senator Richard Black to the Sept. 13, 2018 Schiller Institute Conference in New York. For a fuller report on his latest trip to Syria, see the interview conducted by William Wertz, elsewhere in this issue.

It’s very good to be with you. I am just back from Syria; I was there from September 1 to 9. It was a tremendous trip. I covered a great deal of the country. I went all the way from Damascus to Aleppo and to other places in between.

This is the second trip that I have taken. I was over there two years ago, and at the time I went to the city of Palmyra. Palmyra had just been liberated from ISIS, so I paid the visit, and shortly afterwards ISIS counter-attacked and seized Palmyra once again.

Things have changed enormously. I met for three hours with President Bashar al-Assad, who, contrary to mainstream media, is an extremely rational, highly intelligent, and I think a very decent individual. He was really almost joyous. He felt that peace was at hand, a feeling that was shared by people just across the country. Talking with shepherds out in the desert, they were all so delighted that the terrorists have been driven from Syria in almost every area, and were looking at returning to peace, having the refugees, having their relatives return, and then rebuilding the country. 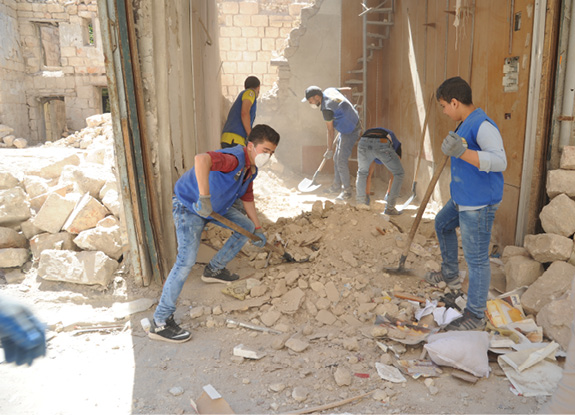 This was the spirit. You can see the country being rebuilt all over. And I’ll tell you, the security—I had very, very light security—even though I travelled for five miles through open areas. Previously, when I travelled, I had to have a 12-vehicle convoy, with three automatic cannons, and air support, attack helicopters and a jet. This time, I had one carload of troops, and I don’t think they were Syria’s elite secret service.

This was a tremendous, positive change. Everything was going well while I was over there. Subsequently, what has happened is that the remaining terrorists, the worst of the worst, have been trapped in Idlib province. They are under the general command of a fellow named Abu Mohammed al-Julani, the top commander of Al- Nusra, which is al-Qaeda in Syria.

Let me remind you: Al-Qaeda was the group that flew the planes into the Twin Towers and the Pentagon on 9/11, killing 3,000 Americans. The commander of this force is al-Julani; he also is a major commander for ISIS in Nineveh province. He has taken command of Idlib province where a great battle is looming. The Syrian army has surrounded it and is set to move in and crush the greatest terror army on Earth.

The civilians within Idlib are desperate to be liberated. Many of them have escaped and gotten out. The Christians there are being ferreted out and beheaded whenever they can be detected. Some people talk about the “families” of the terrorists, saying “Well, we have to show great sympathy toward the terrorists’ families.” What we need to recognize is that typically, the “wife” of a terrorist is a slave. She has been captured in battle, and the rule that the terrorists follow is that a woman who is captured—she, her daughters, her children—are sex slaves, and they are traded back and forth among the terrorists.

Here we are. I think I and the rest of the world—the rest of the informed world—are shocked that here we are right around the time of the anniversary of 9/11, and we have thrown our full diplomatic and military weight in support of al-Qaeda. We are now fighting shoulder-to-shoulder with ISIS and with al-Qaeda, and we are putting out these wild claims that there’s going to be a Syrian gas attack, another one of these false-flag gas attacks.

I think it’s a tragedy. I wish that the people in New York City whose families died on 9/11 understood that we are now fighting, struggling—John Bolton is going around the world enlisting the support of the world to attack Syria and to defend al-Qaeda and ISIS in Syria! This is the situation that we face today. It is a bizarre situation, something that no American would ever expect after the trauma of 9/11. And so I’m hoping that as we get the word out, we make it more difficult for the deep state to engage us in an escalation of this seven-year, painful, brutal war in Syria. 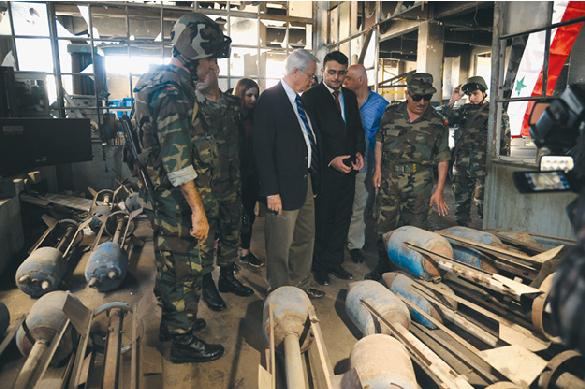 One of the policies that has been followed by President Assad has been reconciliation. There’s a bureau of reconciliation and they talk with rebels in various towns, and they get them to surrender their weapons, and in exchange they’re given amnesty. Those who have not fought on behalf of the Syrian army, actually join and fight on the front lines.

I was extremely skeptical. When I first heard of this, I thought, all they’re going to do is, they’re going to act as though they’re going along with it, and as soon as the opportunity arises, they’ll stab the Syrian army in the back. In fact, the people of Syria have so turned against the war, now that they’ve had experience with these foreign jihadists that we have recruited from all around the world. (The United States recruits them, arms them, trains them, sends them off, and they man al-Qaeda, they man ISIS.) Many of these towns that joined the early revolution have said this stinks; this is not what we want. We want the old Syria that we had before.

From all reports that I can obtain, reconciliation has been a resounding success, and it has pacified the country. And for this reason, I was able to stop at obscure places. We’d be out in the desert and need to make a rest stop, and there’d be some little shanty, some fellow who would be growing a few olive trees, eking out a living, and we’d stop there. We weren’t there to question them, we were there to use the restroom—and they would volunteer, and they would say: We are so delighted that the terrorists have been driven out and we want to express our gratitude to President Bashar al Assad. I have heard this from peasants, from people who sweep streets, who clean toilets for a living, all the way up to members of Parliament.

The Status of Women and Religion

I met with the head of Parliament and with a good portion of the Parliament of Syria, and I will tell you something that the mainstream media won’t tell you: The Parliament has a substantial number of women who are the top legislators. We’re always told that the Sunnis don’t have any authority in Syria: The fact of the matter is that the President’s wife is a Sunni, and she is very powerful, not only nationally but within her own family. The President’s principal media and political advisor is Sunni. The Grand Mufti, who is the top Sunni authority in Syria and surrounding locations, is an ardent supporter of the President. Most of the Syrian generals are Sunni; most of the top officials in government are Sunni.

This whole myth [of religious conflict] was created as part of the justification for going to war against Syria—that somehow, we needed to figure out which religious group would control the country.

Reconciliation has been a very surprising success, and the country has clearly come together. There is enormous unity, and I think there’s probably not a politician in the United States that would not die to have the popularity ratings of the President of Syria.