This transcript appears in the October 5, 2018 issue of Executive Intelligence Review.

LaRouche PAC in Michigan:Stop the Coup and Win the Future!

This is the edited transcript of opening remarks by Susan Kokinda and Ron Kokinda to the LaRouche PAC Town Hall of Sept. 29, 2018 in Northville, Michigan in the 11th Congressional District just outside Detroit.

Susan Kokinda: Welcome to the LaRouche PAC meeting. I’m Susan Kokinda. We are now less than six weeks away from the very decisive and history-making midterm elections, that will determine whether or not the nation, and the world, will move forward with Donald Trump’s Presidency and Lyndon LaRouche’s policies, or whether we are going to be dragged into an impeachment process, and back to the Obama/Bush policies of perpetual war, regime change, and economic disintegration, which will accelerate when the Western financial bubble bursts, which could be very soon.

With the Brett Kavanaugh hearings this week we have all seen that the enemy will stop at nothing to destroy the institutions of this nation. I’m sure our special guest speaker Barbara Boyd will be addressing this as an element of the ongoing coup process. Our job, your job, is to lift the population above the screaming, of the media, and of partisan politics.

As many of you know, on Aug. 17, the LaRouche PAC released a Policy Statement titled, “Countdown to the 2018 Mid-Term Elections: We Must Take Charge Now!” identifying the midterm elections as the most crucial elections perhaps of our lifetimes. That statement calls on citizens such as yourselves to take charge. We can’t let the media, we can’t let the political parties set the agenda. We have to set the agenda.

This statement calls on candidates to adopt three pledges. In other words, there are three standards to which we have to demand that those running for office rise to, and I want to read those three pledges to you:

1. I will not support impeachment of President Donald Trump. In general, I will act to end the ongoing insurrection against the President and to investigate those responsible, referring them for prosecution where warranted.

2. If elected, I will undertake to implement Lyndon LaRouche’s four principles for the urgent economic recovery of the United States. . . .

We list those principles, and all of you will have copies of this leaflet, so I’m not going to read the details of that.

3. I will work with Russia and China and other nations on areas of mutual interest, particularly conquering terrorism, joint ventures to develop infrastructure for the world’s developing economies, and exploring space. President Trump has attempted this program for peace. He has been blocked at every turn by the City of London and Wall Street and politicians who profit from perpetual war and the cheap labor regimes of globalization. . . .

I’m happy to report that we actually have our first United States Congressional candidate in the country who has endorsed this statement, and he’s right here in Michigan! It’s Jeff Jones, the Republican candidate for Congress in the 12th Congressional District (CD). He’s running against incumbent Democrat Debbie Dingell, who replaced her husband John Dingell, when he retired from Congress. That’s the district which runs from Downriver all the way over to Ann Arbor. I think we have some of Jeff’s constituents with us today.

He has endorsed our campaign. We have welcomed his support, and we have urged the voters in his District to take his campaign with the utmost seriousness, and also obviously to understand the disastrous consequences of a Democrat-dominated Congress. We invited Jeff to come today—but, not surprisingly, he’s campaigning in his own District, which this isn’t. He has sent greetings to our meeting, and my husband Ron will read those greetings.

Ron Kokinda: I had the opportunity to attend a “Meet the Candidates” evening on Tuesday. Jeff Jones, who is running for U.S. Congress from the 12th CD, invited people to come in and meet candidates and to make some remarks. From the 14 State House Districts and 8 State Senate Districts that overlap the 12th CD, there were three candidates for the Senate, three for the House, and also a Supervisor candidate, along with a Republican official for southeast Michigan. Jeff introduced me as with the LaRouche PAC, an organization that can give you a very good idea of what’s going on behind the scenes. 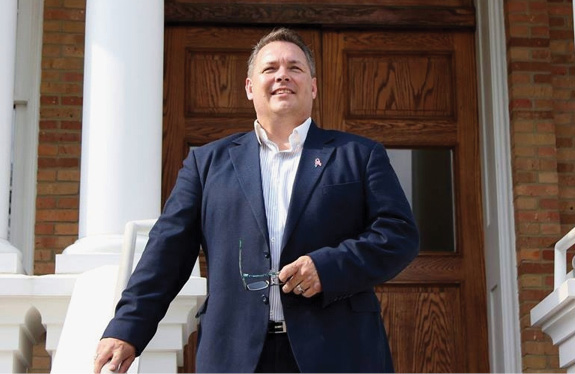 Here is Jeff Jones’ statement to our meeting. It was dashed off in haste, so it may be rough in spots:

It is with great pleasure, I send you greetings!

Who would have ever guessed that we would be seeing what we are seeing in the political kingdom? These distractions on progress are quite the oxymoron!

It is amazing how black becomes white and white becomes black, the very core philosophies of Luciferianism developing around us.

As our Constitution is now raped publicly without defense, it is the rallying in the voter’s booth that becomes our deliverance!

As a Regional Vice President in Financial Services, I thought there is no way we would ever see the Dow rise about 12,000? 15,000 would unsustainable?

Right??? 20,000, miraculous, and yet suspect! But to be thinking 30,000 even possible is a completely different world than the last century!

Educational Renaissance is my top platform issue because it becomes the nucleus of our economy, our social justice, and the empowerment of a nation!

If we can undo 100 years of educational meltdown, we can revive an appetite of greater vision for all of the community.

Although NAFTA was destructive to the 12th district, it was a temporary treatment to a failing auto industry. The management of its successes and planned failures are now just being realized.

As the Silk Trail slowly gets rebuilt, and the reassuring of a genuine global economy, we may find a balance of trade, but more importantly, an opportunity of stabilization to index.

As our President restores prosperity to Americans and takes control of foreign policy, it is only those who have sold out to private legacies that are fearful of his strategies. Protecting our alliances and exposing our enemies is a light that many hope to be put out!

My role in Congress is, uphold our Constitution, and have the insight to shore up leadership that lasts long after I have served.

Unfortunately, Congress has become a power seat, a lobbyist’s wet dream, and our nightmare!

Thank you for the many LaRouche team members that have friend requested, shared my posts and videos, and are encouraging me, while in the trenches moving forward. Collectively, we become a bigger community of visionaries.

Please help our team in the defeat of dynasty politics, selfishly controlled industry pockets, and the hindrance of genuine progress. Tell your friends of the 12th to go to www.facebook.com/jeffjones4congress and share my weekly videos and posts to exponentially outreach and expose to all we hold dear, the flaws of the last 50 years of decay. My 14 grandchildren, and your children’s children, are depending on you! God Bless you and the citizens of the United States that get the benefits of visionaries like yourself! 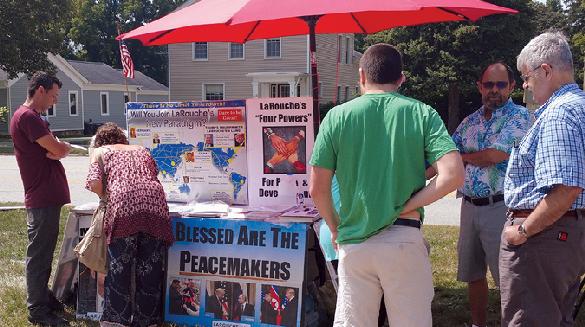 We Witness the Birth of a New Movement

Susan Kokinda: I want to highlight something Jeff said, because I think it points in a very important, new political direction, and that is, you notice, he said he’s campaigning against the failed policies of the past fifty years—not the last eight years, but the past fifty years. In other words, he’s addressing a much more systemic failure, and looking for policies that will give us a future.

Similarly, John James, the Republican candidate for United States Senate, is a military veteran and a businessman. He was recently asked at an event, how does his family feel about him running as a Republican? He’s African American, so the assumption was, his family is all Democrat. And what he said was: “The Democratic Party abandoned us a long time ago.” But he has further gone on to say that both political parties have failed us.

I think what we’re seeing with actually viable candidates who are out there, is that they’re using the Republican Party as a vehicle, as Donald Trump did. But this is a new phenomenon in the country. There is an independent movement under way, and this underscores our role. This election is not about politics, or parties, it’s about a new policy and a new paradigm.

I do want to bring to the attention of our audience, besides, that there are two other independent candidates in the country, who have been endorsed by LaRouche PAC: One is Ron Wieczorek, an Independent running for Congress from South Dakota, and the other is Kesha Rogers, whose campaign is our national flagship campaign. Rogers is running as an Independent in the Texas 9th CD in Houston, against one of the leading proponents for impeachment, Democrat Al Green. She’s about to get her first billboard up, outside Houston, and we’re going to make her campaign a national spearhead, to show people how to fight; that you can’t duck the impeachment issue.

The midterm elections are all about Donald Trump versus an Impeachment Congress. It is not about the individuals, in most races. There are some clearly qualified, unique people, who are affiliated with us. In many other cases, you may look at the Republican candidate and shrug—but that’s not the issue! The issue is, will there be an Impeachment Congress, or a Congress which won’t get in Trump’s way?

So, without any further introduction, I want to turn the discussion over to Barbara Boyd. Barbara is the Treasurer of LaRouche PAC. She is the author of our famous dossier on Robert Mueller, Robert Mueller Is an Amoral Legal Assassin: He Will Do His Job If You Let Him. If you don’t have that dossier yet, get one.

Ms. Boyd has headed LaRouche’s legal defense team, engaging in head-to-head battle with Robert Mueller, when he indicted Lyndon LaRouche in the 1980s. So I think it’s safe to say that Barbara is the nation’s leading veteran in the fight against Robert Mueller. Please welcome Barbara Boyd. [applause]