This article appears in the October 19, 2018 issue of Executive Intelligence Review.

Oct. 16—Ron Wieczorek, Independent candidate for South Dakota’s single Congressional seat in Washington, held a campaign event on Sunday, October 14, in Sioux Falls, bringing together thirty engaged participants from South Dakota, Minnesota, Iowa, and beyond for a day-long series of briefings, presentations, and dialogue. Candidate Wieczorek stated in his welcoming remarks, “Every crisis we face—war, drugs, the farm crisis, energy, health care, income, disaster protection—is related to an unjust system. Thank God there’s a new system coming out of the Pacific,” referring to the Belt and Road Initiative (BRI) development corridors now spreading across Eurasia, Africa, and into South America. The conference was organized to present a full picture of this, as the necessary context for taking up what must be done in the United States and the Americas. Wieczorek identified the “British free trade system” as the enemy of mankind.

Among the event attendees were several volunteers who had helped Wieczorek achieve ballot status for the Nov. 6 election, for which he filed nearly 4,000 signatures in April. Farming and ranching were the principal occupations of the assembled guests, whose familiarity with physical production and technological improvement allowed a high-level discussion of what Wieczorek refers to as “moral economics,” and the LaRouche method.

Wieczorek himself, 75 years old, has a solid background in productive agriculture, as does his family, going back generations. His experience includes operating and selling farm machinery, interstate custom harvesting, and today, raising Charolais bulls. Since the late 1980s, when he first encountered the international policy work of Lyndon and Helga Zepp-LaRouche’s newly-formed Schiller Institute Food-for-Peace drive—founded in Chicago in September 1988—and at large, Wieczorek has led the charge for what he stresses is a new, moral economic system. For the last eight months, Wieczorek has campaigned hard with this message, making use of various high-profile means to get his word out.

He has participated in a number of debates with the three other candidates, including at the Dakotafest fair in Mitchell, the KSFY-TV sponsored debate at the State Fairgrounds in Huron, the Americans for Prosperity—South Dakota forum in Sioux Falls, and a candidates’ forum sponsored by the Concerned Citizens of Fall River County in Hot Springs.

Gene Schenk
Candidate Ron Wieczorek (standing, left) addresses a point in the discussion during a presentation by Bob Baker (at podium) during the ten-hour dialogue, attended by some thirty people in the course of the day.

He has been interviewed and covered by radio, television and print media throughout the state, including the Lakota Country Times, “the only official legal South Dakota Indian newspaper on Tribal Land,” with a circulation of over 80,000 to all Native American reservations in the upper Midwest.

Ron, his wife Deanna, his two sisters, and other campaign volunteers have maintained high visibility in local communities and on college campuses, driving their Wieczorek for Congress “float” (a pick-up truck) in the many fall homecoming parades. Every day, Ron and volunteers are stopping off in dozens of farm towns, at their convenience store/gas stations, the last remaining social centers in rural counties. Tens of thousands of Ron’s programmatic flyers are circulating this way throughout the state.

South Dakota has only one Federal Congressman, since its population is below a million. Nearly half live in Sioux Falls, in the southeast corner, near to Minnesota, Iowa and Nebraska. By now, most of the residents, as well as through-drivers, have come to know Ron through his huge, lighted campaign billboard on Interstate 90 just east of Sioux Falls. Their common response is that they love the part that says, “Jail Wall Street.” It advertises electing Wieczorek, and implementing “LaRouche’s Four Economic Laws.”

The Sioux Falls conference on October 14 was a marathon of discussion, running the gamut from the present-day strategic crisis to LaRouche’s philosophical and historical method; from past history to proposals for the future. LaRouche associates Bob Baker, Marcia Merry Baker, and Jason Ross came in from out-of-state, to provide illustrated presentations on the following themes: a world tour of the Belt and Road Initiative; LaRouche’s history of organizing for a new world economic system; mega-projects (both planned and underway) in China, the Mideast and Africa, Southeast Asia, and the Americas; the British Empire system as the enemy of mankind; the nature of discovery and how to organize education with the goal of fostering creativity; LaRouche’s Four Laws; environmentalism as an anti-human fraud; and the beautiful nature of the human species, made in the image of God.

Bach and Handel piano music called the assembly together, and at day’s end, in celebration, all joined in singing “The Battle Hymn of the Republic.”

Throughout the day, most prominent among Ron Wieczorek’s responses to questions and discussion was his view of the central importance of adopting a personal mission. When a long-time activist farmer expressed dismay at the difficulty of achieving the needed political changes, Ron responded forcefully: “The problem isn’t what’s going on out there; it’s what’s going on between your ears.” Intervening at another moment of overwhelmed recognition of the magnitude of the tasks we have assigned ourselves, Wieczorek expressed the solution in one word: “Outreach!” He declared, “We have to defeat immoral economics.”

How Do You Know What Is True?

One highlight of the day’s discussion arose from by Jason Ross’s presentation on the primacy of the concept of discovery itself in LaRouche’s economic method. Against the background of our species’ ability to create resources and expand our numbers through mastery of physical principles, Ross posed the dilemma: Many concepts that seem almost self-evident to us and are taken for granted, have a basis unknown to us. For example, we all think we know that the Earth is a sphere, but how many could help an eight-year-old understand why we know it? After a discussion of Eratosthenes, the audience was surprised by Ross’s remark that on the Earth, it is impossible to draw a square, and that an east-west line cannot be straight!

This led to a report on surveying by Minnesota farm leader Andy Olson, who has noticed that at the edges of counties, the roads and power line tracks that are supposed to be “straight,” actually bend. This can be seen in the surveying done in the Western lands for the 1860s Homestead Act, and in Minnesota, and on the checkerboard of square “sections” throughout the Plains. Working through these conundrums together was a direct social experience of creative thought.

The same depth of dialogue took place around LaRouche’s key concept of energy flux-density. Ross presented the history of energy in terms of the “gift of fire” to mankind by Prometheus and historical advances in the forms and quality of “fire.” Bob Baker conveyed the concept of energy flux-density in his presentation of “The Astronaut Farmer.” He demonstrated the “powering up” of the human hand through technological advances in three areas of farming: tilling, seeding, and harvesting.

Together, these topics allowed the concept to come to life, and sparked a fiery discussion about whether an increase of the productive powers of labor could go too far, having the effect in the farmbelt of ever larger, more powerful, satellite-driven machinery, acting to depopulate rural areas to the point that the noetic field of knowledgeable farmers could become too diffuse. The average age of farmers is, in fact, rising. The countryside of productive farmsteads and family-scale farming is shutting down, in favor of plantation-scale agriculture. 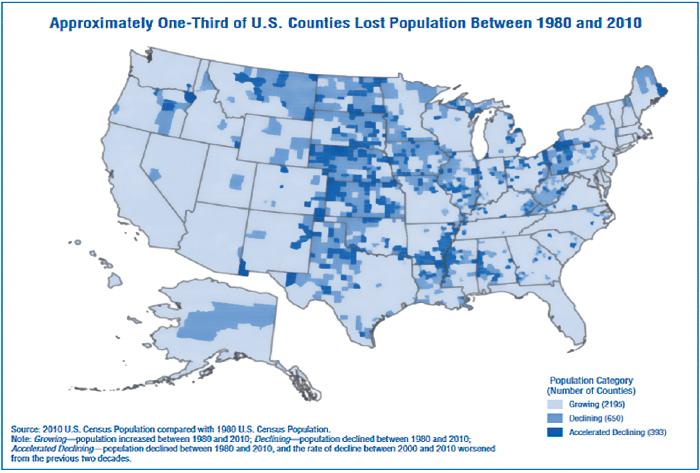 The thirty-year pattern of population loss, shown here by county, is severe in the Farmbelt, concentrated in the High Plains. It has intensified over the last eight years.

Several farmers took the occasion to report on the devastation they personally witness on a daily basis: Once thriving local towns are now boarded up, or even being bulldozed flat; once lively farmsteads dotting the landscape amidst the fields, are either gone or just a sole dwelling surrounded by decaying out-buildings.

This led to a heated discussion of how sovereign government policy can intervene to stop this devolution, by making crucial decisions about what scale of farming to foster, with measures that are known to work: parity pricing, production management, ending mega-monopolies, use of the Commodity Credit Corporation (set up in the FDR period), and most importantly, re-asserting national sovereignty over farm, manufacturing, infrastructure-building and, indeed, all economic policy.

A young Iowa farm leader put forward concrete ideas for improving the farmbelt under an economic system suited to production: re-instate Glass-Steagall and use Federal government powers for production management. For example, by setting up beneficial set-aside programs when needed, initiating parity pricing, and engaging in anti-trust actions. To answer the usual counter-argument, that parity farm commodity pricing will hurt consumers by driving up prices, this cattleman has done work-ups of how this can be done. He told the meeting there must be a transition to restoring productive organization in rural areas, and it can be done to the benefit of all.

Marcia Merry Baker also hit on this task, in giving a report on “The Americas,” covering the dismal picture of both the economic decline and lack of infrastructure in North America in the last half century, in contrast to what we know should be under�taken: connectivity through a continental, high-speed rail grid; infrastructure to defend against disasters, such as flooding, fires, high-wind events, and earthquakes; and providing new supplies of fresh water for the western drylands. There are initiatives for this, in league with the BRI, in Central and South America.

Moreover, there is no need—in a developing world where we look forward to the African continent becoming food self-sufficient, and all other regions likewise—for the Americas, both North and South, to remain the soybean monoculture source areas for the globe, a situation in which the Bunges, Cargills, Dreyfuses, and other cartels obtain their commodities dirt-cheap, just to turn around and use this food capacity to swindle farmers and enforce hunger. This must end, and we can do it. Mrs. Baker provided exact quotes from the 1988 UN General Agreement on Tariffs and Trade (GATT) Montreal Round, when the U.S. delegation, headed by former Cargill Vice President Daniel Amstutz, for the first time ever, said U.S. policy no longer supports food self-sufficiency. As of then, the United States supported obtaining food on the “world market”—classic British “free” trade, for our national food supply.

Bob Baker and Jason Ross gave hard-hitting presentations on the British pedigree of the enemy of development: the spider web of subversive globalist finance; the insane lies of the “green” genocide movement; the danger of British imperial geopolitics agitating for a world war. There were “amens” from the audience, on the way that President Trump is standing up to the British attack job being run so obviously through the Russiagate hoax, and all the other filthy operations. Trump’s friendship diplomacy initiatives with the leaders of Russia, China, Japan, India and other nations are the way out of the British system era, and into a new, better future for humanity. 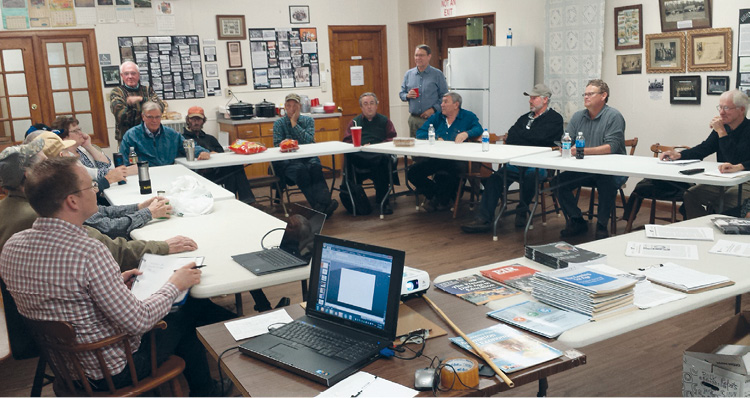 Here again, the first comment by one farmer was, “How do we stop this terrible depopulation?” They spoke of how drug running, drug use and drug deaths are all over the place. Several participants at this meeting, and also at the Wieczorek campaign conference, first became active policy fighters thirty years ago, when Lyndon and Helga LaRouche first convened the Schiller Institute Food-for-Peace effort for strategic change all across the board.

Prominent among those early recruits to the movement was Gene Schenk, originally from Minnesota, who was now back on home ground, attending both the Redwood Falls and Sioux Falls events. Schenk is a communications volunteer for Ron’s South Dakota campaign.

Wieczorek’s initiative has not only mobilized endorsements in South Dakota for his candidacy for federal office, but has catalyzed a broader mobilization throughout the farmbelt for more organized discussion and leadership to shift national practices and policies.