The Phenomenal Development of Xinjiang, and the Feudal Lords of London Who Want to Stop It 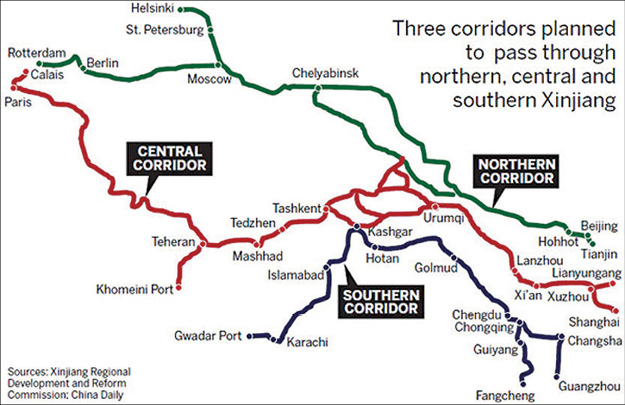 Oct. 29—The vast Chinese region of Xinjiang (Xinjiang Uyghur Autonomous Region) is the hub for the most ambitious global undertaking in modern history, or perhaps in all of history—the New Silk Road Economic Belt. When Xi Jinping announced the launching of this New Silk Road in Kazakhstan in Sept. 2013 (along with the 21st Century Maritime Silk Road, announced in Indonesia in Oct. 2013), the idea had already been percolating across Eurasia—starting with the fall of the Soviet Union, when Lyndon and Helga LaRouche posed the New Silk Road as a basis for ending geopolitics, bringing East and West together through joint development and cultural exchanges.

Change has been rapid. In 2017, more than 700 trains traveled through Xinjiang on the way to Europe, a number which is expected to reach 1,400 in 2018. The pace of development within Xinjiang itself is among the highest in all of China, reaching 7.6% in GDP growth in 2017. Growth in fixed assets reached 20% last year, with $70 billion allocated for infrastructure construction for 2018, including expansion of the Urumqi airport and new road and rail development across the region.

Yet, as anyone reading the Western press will be aware, over the past year a vast campaign to demonize China has been launched by the British and American imperial interests, accusing China of military aggression, labeling the Belt and Road Initiative an imperialist trick to entrap target nations in debt, and even claiming that China intends to replace the United States as a world hegemon. A major aspect of this campaign is aimed at Xinjiang, fueled by the same “regime change” forces that gave us “color revolutions” around the world over the past decades, who are now attempting to mobilize international condemnation of China’s supposed suppression of the human rights of the indigenous Uyghur population in Xinjiang—the Turkic Islamic people who make up about half of the mixed ethnicities in the region.

This is not new—the World Uyghur Congress was founded in 2004 in Germany, calling for independence of “East Turkestan” (a former name of the region), accusing China of “colonizing” the region and suppressing the Uyghur people. Not surprisingly, the World Uyghur Congress office in Washington has been shared with the Tibetan Centre for Human Rights and Democracy—both financed and supported by the National Endowment for Democracy, the primary color revolution institution in the United States, funded by the U.S. Government and the various George Soros NGOs.

These “Project Democracy” organizations essentially ignore the reality that the Uyghur population has been heavily targeted by the Wahhabi terrorist networks from Saudi Arabia, with many Uyghurs trained by Saudi and Pakistani terrorist networks. While acknowledging that there were a large number of terrorist attacks in Xinjiang since 2009 against Chinese police and common citizens of Han ethnicity, and even terrorist attacks by Uyghurs in Beijing and in Central Asian nations, these attacks are described as local phenomena driven by the repression of Uyghur rights. With an estimated 10,000 Uyghurs having joined the al Qaeda/al Nusra/ISIS terrorist forces in Syria, and many expected to return to Xinjiang now that they have been defeated in Syria, such arguments are no longer justified.

The Truth About ‘Re-education’ Camps

The current round of attacks on China’s policies in Xinjiang center on the accusation that China has establish huge “re-education” facilities where tens of thousands (some claim millions) of Uyghurs have been sent for “brainwashing.” BBC, in classic imperial fashion, issued a video titled “China’s Hidden Camps,” claiming to have used stealth to film the camps and interview “victims.” In fact, the video makes many claims, but it is obvious that the BBC crew was allowed into Xinjiang; was allowed to drive around, to film the buildings they claim are internment camps; and was allowed to talk to people, although they were under observation by the police.

China does not deny the camps, reporting that people who have committed minor crimes under the influence of Islamic extremists have been sent to the camps for periods ranging from a few months to two years, where they receive vocational training, lessons in Mandarin, and classes to address the dangers and criminality of the extremist cults.

While the primary approach to ending the influence of the terrorists is the provision of a proper livelihood, which is the most fundamental human right, the government emphasizes that the security of the majority of the Uyghur population, and all other residents of Xinjiang, must be protected from terrorism by means other than conducting military operations against the terrorist cells.

While there are certain to be some excessive actions and some mistakes in the process, any sane view of the situation would encourage the effort to prevent the kinds of terrorist destabilizations and massive killing seen in the Arab world as a result of the “color revolutions” there, all openly financed and supported by the same “project democracy” operations in the United States and the UK that are now ranting against China.

The claims that Islam has been banned, that the use of the Uyghur language has been banned in education, and similar accusations in the western press are simply lies. There are 20 million Muslims in China, with about half of Uyghur ethnicity in Xinjiang. There are 57,000 Islamic clerics in China, and 39,000 mosques, 25,000 of them in Xinjiang, many associated with Islamic schools. The government openly says that all religions were severely persecuted in the first decades after the 1949 Revolution, but that it began to be reversed in 1978 after the death of Mao Zedong and the fall of the Gang of Four.

China released a White Paper this year titled “China’s Policies and Practices on Protecting Freedom of Religious Belief,” which encourages ties with foreign religious institutions, but forbids efforts to “interfere in China’s religious affairs” or “subvert the Chinese government and socialist system under the guise of religion.” Given the training of terrorists through the international Islamic networks, this proviso is to be expected. The document reports full protection for Muslim customs “regarding food and drink, clothing, festivals, marriages and funerals.”

The phenomenal pace of development in Xinjiang in shown in the rate of growth both in the GDP of the region and the growth in the average wage over the past 20 years, as shown in Figures 2 and 3, based on data from the National Bureau of Statistics of China.

A study conducted by the University of Texas and the Gerson Lehrman Group (The Hanification of Xinjiang, China: The Economic Effects of the Great Leap West, by Amy Liu and Kevin Peters, 2017) studied the question of Han migrants into Xinjiang gaining more benefit from the massive development of the region than the indigenous Uyghur people. The government launched the “Great Leap West” in 1999 to develop the interior of the country. There has always been a large Han minority in Xinjiang, but that minority has now grown to be nearly equal the Uyghur population in numbers. The total population of 22 million—with thirteen major ethnic groups—includes 8.8 million Uyghurs, 7.7 million Han, and 1.4 million Kazaks.

The study reports that the massive infrastructure development in Xinjiang includes the building and expansion of airports, highway, roads, railroads, telecommunications networks, high-voltage electrical transmission lines, and more. There was $85 billion in new investments in Xinjiang in 2017, excluding oil investments, which were billions more. In July, China National Petroleum Corporation announced that it would invest an additional $22 billion in developing new oil and natural gas resources in Xinjiang, as part of the move to reduce the country’s dependence on coal. 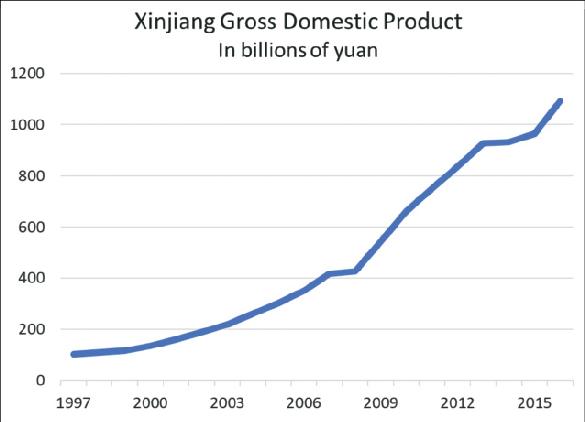 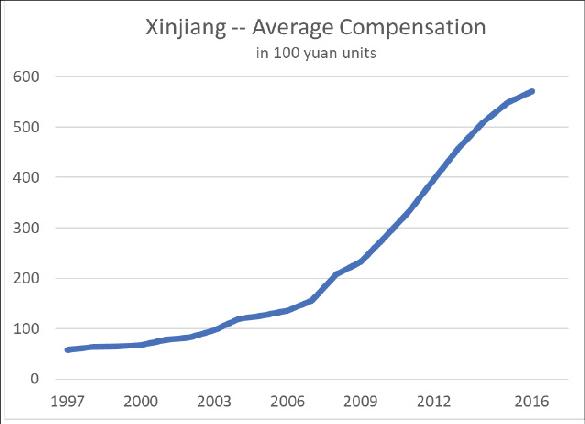 After detailed studies of wages and standards of living, this University of Texas study concluded: “While the Han migrants have benefitted immensely from the development programs, the Uyghurs have enjoyed the benefits as well.” Over the past two years, the central government has directed increasing amounts of credit into the southern region of Xinjiang, south of the Taklamakan Desert, the second largest sand desert in the world. Two paved highways now cross the Taklamakan, 562 km and 436 km long. The southern region is poorer, and also has a higher concentration of Uyghurs. The investments are focused on agriculture, especially water and irrigation, where cotton and fruits are grown.

The southern region has 1.6 million people living below the poverty line, part of the approximately 30 million Chinese still living in poverty. Having lifted 700 million Chinese out of poverty over the past decades, China has made the commitment to ending poverty altogether by 2020. Already in Xinjiang, besides providing jobs with a living wage to millions of Uyghurs, People’s Daily reported that 461,000 rural residents have been relocated from destitute regions to new towns in 2018 alone, where they have been provided with housing and jobs.

The miracle performed by China since the 1978 beginning of the reform and opening up under Deng Xiaoping, and escalating under Xi Jinping’s Belt and Road Initiative, is a boon for all mankind, based on the win-win concept that joint development is a common aim of all nations and all people. It is to be hoped that the meetings now scheduled between President Trump and President Xi Jinping following the midterm elections in the United States, will resolve conflicting issues between the two great nations within the higher principle of cooperation and co-development of the world and beyond.