KEEP ’EM HIGH, WHILE THEY DIE

Oct. 29—I want to draw your immediate and urgent attention to two policy matters that—while the fake news and fake commentators treat them as separate items—are most directly related and must be rejected, for their murderous intent. When we speak of murder, especially on a grand scale of the type referred to as genocide, I must insist that we are usually speaking of the policy the British Empire, and the Queen that rules it, along with her consort, His Royal Virus, Prince Philip, and their Dumbo-eared dolt of a son, Charles. 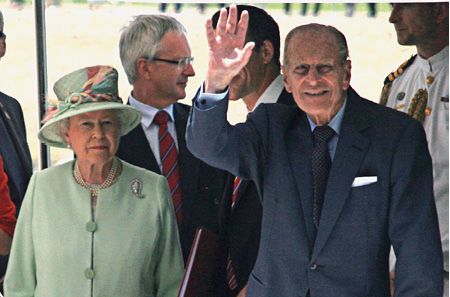 The IPCC Report is a Cover for Genocide

Last month, the Intergovernmental Panel on Climate Change (IPCC) issued a report that once again blamed the human race for what it claimed was the impending collapse of the Earth’s eco-systems, caused by alleged global warming. It then demanded that the nations of the world commit themselves to drastic reductions in productive human activity, so as to limit the projected global warming, caused by human-caused carbon emissions, to 1.5°C. This message was immediately spread around the globe by the fake news outlets.

Let me state emphatically: There is no basis in real science for the IPCC’s fear mongering! Real science shows, as former NASA scientist Tom Wysmuller so eloquently explained recently to a meeting of the LaRouche movement’s Manhattan Project in New York City, the so-called “facts” to support the case, as represented by graphics, don’t support the IPCC arguments about either the reality of global warming or its alleged cause. Human activity, including all production, is not even a significant factor in causing climate change, and reductions in that activity would have little or no real effect on what they allege is happening.

But the deeper issue, as also expressed by the IPCC, is its neo-Malthusian argument, that when all is said and done, there are simply too many people on the planet. Their “final solution” to the phony problem that they have hyped is to reduce the world’s population to around 1 billion people, or less. This is the true content of the environmentalists’ propaganda, whose lunacy has unfortunately infected and brainwashed the minds of frightened people, even here in Africa. This is a call for support for the greatest genocide in history, one that would have made the British-installed golem, Adolf Hitler, blush with envy.

While global warming is a hoax, no matter how loud the fake news and various enviro-jerks scream otherwise, the effects of following the policies proposed by the neo-Malthusians—slowing down and halting the pace of development of the type envisioned by the BRICS nations and China’s Belt and Road Initiative, slowing or halting plans to electrify Africa and the rest of the Global South, halting the peaceful use of nuclear energy—these effects will be very real and very drastic indeed. Such policies will bring death to billions of human beings—the population reduction desired by His Royal Virus Prince Philip and the other leaders of the British-inspired environmental movement.

I have said this before, but it needs restating: Let no African be confused—whenever you hear talk of killing billions, know that it will begin with you and me. That has always been the Empire’s way. We are the ones who are slated to die, as are others in Central and South America, and in Asia. But not just there. Europe will lose population, as will the United States, by the millions, and it won’t be only “people of color.”

Ironically, the man whom the fake media tries to portray as a racist, the American President Donald Trump, is perhaps our last, best hope for saving humanity from these genocidal lunatics. He has refused, so far, to cave in to the screeches for reduced economic activity and development; he has refused, so far, to believe that cutting back advanced economic activity is a solution to anything. For this he has been excoriated, as has Lyndon LaRouche before him, for daring to oppose phony environmentalist science. But Trump has not yet dared, as LaRouche has done, to lay the source of this evil squarely at the feet of the British Empire.

While many have cited George Soros, the billionaire speculator, as one of the principal funding supporters of the global environmental movement and the global warming hoax, they fail to understand that Soros was created by, and serves his master, the British Empire, which created the modern environmentalist movement. Following President Trump’s statement about climate change in a recent interview, “I don’t know that it’s man-made,” Megan Beets of the LaRouche PAC Science Research Team and Tom Wysmuller, a retired NASA meteorologist, presented a strong refutation of the latest IPCC report that calls for drastic reductions of man-made carbon dioxide. Megan Beets proves that the world needs more people, not less, while Tom Wysmuller demonstrates the claim of alarming increases of the ocean level is a lie.[fn_1]

As the LaRouche movement exposed more than three decades ago, the British created the neo-Malthusians, who gathered around such swarms of evil maggots as the Club of Rome and Prince Philip’s own World Wildlife Fund (now the Worldwide Fund for Nature, WWF), whose Panda symbol became the mark of the new beastman movement; its minions have locked up millions of acres of Africa’s sovereign land in game preserves, transformed into playgrounds for the hunter bwanas among the world’s 1%’ers, while blocking comprehensive development projects that might help the rest of us survive.

Among the major funders of the WWF and the once prominent Club of Rome (promoters of the phony “Limits to Growth” of decades past, whose Malthusian logic has been reborn in the reports of the IPCC) are the big oil companies, such as Royal Dutch Shell and British Petroleum, who become richer by far by limiting the use of hydrocarbon fuels, while blocking nuclear power, and delaying and underfunding the development of fusion power, a potentially unlimited and cheap source of energy championed by LaRouche and his international movement.

But consider also a seemingly unrelated development: On Sept. 18, in a unanimous ruling, South Africa’s highest court, the Constitutional Court, legalized the use of cannabis by adults in private places, as well as the growing of marijuana for private consumption. That ruling paves the way for the full legalization of the sale and use of marijuana, by stating that the current laws that prohibit its use violate the constitution.

First, the move to legalize dagga and other illicit drugs is part of a global movement, funded by the same British asset, George Soros, so heavily involved in funding the global warming hysteria. One nation after another is succumbing to these British bankers’ drugging movement, which most recently claimed Canada as a victim.

Die for the British Empire or Save Yourself with LaRouche, BRICS and BRI

Second, I shall tell you that the move to keep people stoned and high on drugs, goes hand in hand with the effort to organize a global genocide. If you are smoking dope, you will be less likely to oppose the plans for the global genocide implicit in Global Warming hoax and required to comply with the IPCC report. In fact, the people who support the IPCC and similar organizations and their warnings, are a confluence of pot smokers. “Keep ’em high, and let them die,” the Queen says.

I urge all of you who don’t want to die at the hands of the British Empire to oppose these twin evils—the IPCC report and the drive to make dope legal—by joining with me and the movement I represent in separating our nation and all of humanity from the clutches of the British Empire. Support my fight to align our nation further with the emerging new paradigm as represented by the policies and institutions of the BRICS, of which South Africa is a proud member, and of China’s Belt & Road Initiative (BRI). We owe no allegiance to any crown, but to the common welfare and future of humanity.

If you wanna be high, you’re going to die—as the British Queen intends. There are no limits to growth other than the dope-infused ideology of the British Empire and its Wall Street satrapy.