LaRouche Hamilton Candidates Campaign for the Future, and Defend the Presidency Oct. 30—The LaRouche PAC intervention into the 2018 mid-term elections, the Campaign to Secure the Future, has, from several indications, done what it set out to do, particularly in the form of the flagship Congressional candidacies of Kesha Rogers in Texas, and Ron Wieczorek in South Dakota. While support for, or opposition to the Trump Presidency is the apparent “dividing line” and “electoral flashpoint,” something else entirely is afoot. A new set of policies, carrying the nation into the next half-century and beyond, is needed and available, and the Presidency of the United States needs to now act upon these policies in concert with Russia, China, and India. The President requires a cooperative Congress for that purpose, and there is no other sane choice before the American people than that.

There is another aspect to the domestic American political landscape. The media cannot afford to report it, or affirm it, so they stupidly pretend it does not exist. It is, that the economic reality lived by the 80-90% of politically disenfranchised Americans has impelled them, sometimes involuntarily, into emerging patterns of thought and behavior not seen in the United States since at least 1932, and perhaps not since the mid-nineteenth century. This process is in Classical political science termed a “mass strike” process, a little understood phenomenon that is the fundamental dynamic of social change in the post-American Revolutionary world. 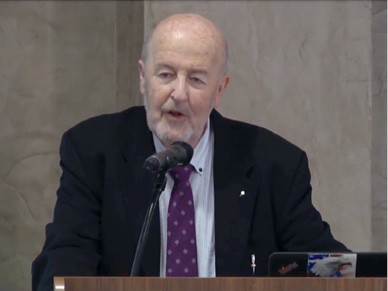 Rogers and Wieczorek, basing their candidacies on the LaRouche Four Laws, are offering distinctly 21st/22nd Century solutions to this economic crisis. The Rogers campaign recently held a campaign event and concert in celebration of the 60th anniversary of the founding of the National Aeronautics and Space Administration (NASA), featuring not only meteorologist Tom Wysmuller, a former NASA employee, as a speaker, but also the candidate herself as a vocalist and soloist with a local chorus. In addition, 15 persons, including Rogers, joined 15,000 others in visiting the Johnson Space Center in Houston, which opened its doors to visitors for one day only, the first time in five years. Importantly, this was done not only in commemoration of the 60th anniversary of NASA, but the 20th anniversary of the International Space Station, showing that NASA views itself, and creative scientific discovery, as the natural bridge among all nations.

Campaign staff noted not only the large number of young people and families that were there, but the scientific optimism of all, most of whom were from the metropolitan Houston area. For years Rogers has relentlessly campaigned for an expansion of NASA, and collaboration with Russia, China, India and other nations in a Strategic Defense of Earth, and on crash programs for exploration and colonization of the Moon and near space. LaRouche’s Fourth Law, promoting technologies based on new physical principles, implies a joint Moon-Mars mission, including the lunar mining of helium-3 to supply the fuel for fusion reactors, thus removing the physical necessity for dependence of all economies upon fossil fuels.

That new technological platform, however, demands that the Congressional district Rogers seeks to represent, and the city of Houston as a whole, become a “science driver” for the United States and a model for international collaboration, particularly in education. In the aftermath of the destruction of life and property in 2017, as a result of Hurricane Harvey, this optimistic educational perspective is sorely needed in the Ninth District, one of the poorest in the nation.

A Rogers staff member pointed out that “the Gemini and Apollo missions, Skylab, and the Space Shuttle flights were all supervised or coordinated out of the Johnson Space Center. Today it is part of the controlling and monitoring of the ISS [International Space Station]. It’s one of the closest places on Earth to the Galaxy. So why isn’t every child here thinking, not only about solving all the material problems confronting us on Earth, but of discovering new ways of thinking about the Solar system and the Galaxy? Sixty million Chinese school kids watched their astronauts float weightless in space. They talked with them. They did experiments with them. NASA is looking at the Galaxy all the time. American children deserve to dream, and that’s what our Campaign to Secure the Future is all about.” 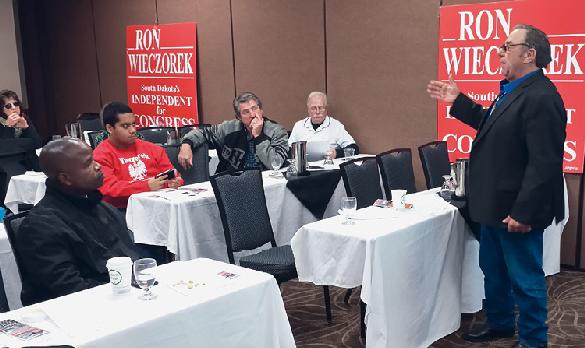 Candidate Wieczorek, one of four running for South Dakota’s single Congressional district, a farmer by profession for over 50 years, has been touring towns ranging from several hundred to a few thousand people—52 towns in a single four-day period, from early morning until very late at night. He and his volunteers are conversing with people in those cafés, diners, and gas stations that still remain in the largely destroyed and closed centers of these once-growing, even prosperous towns. And the picture they are getting is of an America that is willfully unreported, and therefore unknown to other Americans. It has been dispossessed, injured and forgotten.

Associated with LaRouche for nearly four decades, Wieczorek vigorously supports a return to FDR’s Glass-Steagall, the creation of a national credit system based on the U.S. Treasury, parity prices for farmers to encourage an expansion of family farms (“One million new farmers in the United States of America!”) and the Chinese Belt and Road Initiative (“If China can do it, so can we!”). He has particularly taken on the “bullet-headed” idea, still prevalent in parts of South Dakota, that Russia is the primary enemy of the United States. Instead, Wieczorek insists: The primary enemy is the British Empire’s “special relationship” with the United States, consisting of “so-called free trade,” globalization, and “environmentalist” depopulation policies.

This has produced heated, even hostile confrontations. “But the difference,” a 20-year-old volunteer from New York City reported, “is that people actually want to talk. People say that they have left the Republican and the Democratic Party, and they are looking for something else. They don’t ignore you, like in New York. Even the knuckleheads want to know why we think that Russiagate is a hoax, and that Trump’s policy of constructive engagement with Russia to stop war is right.”

“Greedy-mean Al Green’s” self-identification as “the voice of impeachment” from one of the poorest districts in the country, expresses the self-immolating dilemma of today’s Democratic Party. Mortgaged to Soros, locked into defending the fully-exposed British Intelligence-directed illegal surveillance of Presidential candidates to fix the outcome of the U.S. elections, riddled with the disease of identity politics in the form of various “isms” and “phobias”—the Democratic Party has driven its once-loyal base to Independent or Republican candidates.

Disengagement from the “deplorable” 85% of Americans—voter base and all—in favor of a marijuana-fueled pipe dream of an environmentally sanitized, cooled-down, and globalized future, costing a mere $122 trillion dollars and about as likely to work as Adolf Hitler’s “Thousand-Year Reich,” would have once been seen as an unworkable campaign strategy. The Democratic Party leadership’s blithe obliviousness to all this may be an unintentional clinical proof of the old observation that “pot smokers can’t remember the brains they’ve lost.”

Four thousand people received, one by one, packages of Kesha Rogers literature at the October 22 rally held by Trump in Houston, in which about 45,000 people participated inside and outside. Five people called into a gospel radio station within two hours after the campaign’s radio ads started to play, agreeing with the ad’s criticisms of incumbent Congressman “Greedy Al” Green, and asking how to find out more about Rogers. About three hundred people have given their names to work with the campaign in the last seven days.

But what is it that these people are being organized to support? On South Dakota campuses, populated by an equal number of international students and locals, it has been the discussion of the needed dialogue among Putin, Trump, Xi Jinping, Prime Minister Modi of India, and other world leaders that has generated the greatest interest. A “New Bretton Woods” monetary system had some resonance among students familiar with what the 1944-1971 Bretton Woods system had been. Fifteen hundred students received leaflets, distributed one by one, over the past two weeks. Heated conversations about free trade, environmentalism, etc., occurred, but the idea of the heads of state of the four “continental nations” working together, as in the case of North Korea, to solve the world’s problems, was met with receptivity and excitement. About ten percent of them indicated in various ways that they would continue contact with the campaign.

In 1856, the Republican Party fielded its first Presidential candidate. That party came about due to the failure of earlier political formations, and the inability of people to continue to support the Democratic Party, which was the party of slavery and treason. In 1932, President Franklin Delano Roosevelt, running as a Democrat, recruited posthumously the Republican Party’s Abraham Lincoln to the Democratic Party. FDR reshaped that party in the image of Lincoln and George Washington, saving the souls of many of its leaders in the process. His New Deal for the American people, over the objections of Democratic Party boss and Wall Street tool John Jacob Raskob (a supporter of the 1933 Business plot to overthrow FDR, later exposed by Gen. Smedley Butler in Congressional testimony), is the same seismic change that is not only now required—it’s now occurring.

Whether that change is led by candidates of the caliber of Kesha Rogers and Ron Wieczorek, and the policies that the 2018 Campaign to Secure the Future have successfully promulgated, depends on the intelligence and engagement of the American people in defense of the Presidency, and that Presidency’s campaign against war, through a Four Powers dialogue.