Oct. 27—President Donald Trump, at the outset of his historic “60 Minutes” interview with ageing nag Lesley Stahl, became the first major world leader, aside from Lyndon H. LaRouche, Jr., to refute the scientific validity of the “climate change” hoax represented by the Intergovernmental Panel on Climate Change (IPCC), promoted by the global financial establishment, and endorsed by every major national government on the planet. He pointed out, as we all used to learn in school, and as every climate scientist knows, that it is true that the climate has been constantly changing throughout history.

Trump attacked the totally unsupported IPCC claim that suddenly, since some time about a century ago, climate change, which had been going on for billions of years before the appearance of the first creative human beings, is now something that human beings must be eliminated to correct. This is no exaggeration. One of the leading figures pushing the IPCC agenda is John Schellnhuber, an adviser to the German government and the Vatican on climate change, whom Queen Elizabeth named a Commander of the British Empire (CBE). At the 2009 Copenhagen climate conference, he announced that the “carrying capacity” of the Earth was less than one billion human beings, meaning that 6.5 billion or more of us must be eliminated. 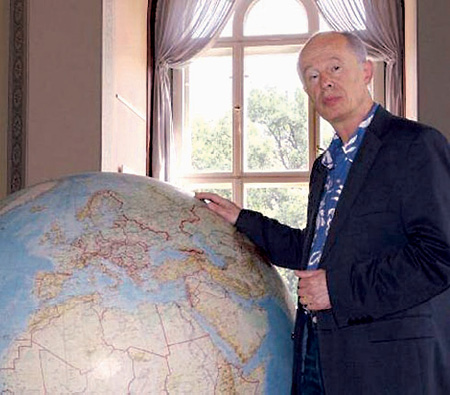 consciousnachhaltigkeit2009.commerzbank.de
Hans Joachim Schellnhuber, Commander of the British Empire, promoter of population-reducing policies in the name of defending against “climate change.”

Various studies have debunked the Climate Change agenda, item by item. A group of NASA scientists and engineers, “The Right Climate Stuff,” regularly posts materials and presents lectures in an effort to separate NASA from fraudulent materials on climate change. Simply, the IPCC contention is that of all of the factors—for instance, the vast power of the Sun—that affect our climate, the only one that counts is the slight variations in the carbon dioxide content of the atmosphere which is approximately 0.04%. On top of the insanity of that, they further contend that the 3% of that 0.04% (0.0012%) that humans have produced is what counts, and that the 97% produced by “nature” means nothing. They expect you to believe this without any data at all to demonstrate that this has ever been the case or ever could be the case, because they are experts.

When Trump pointed out, “We have scientists that disagree with that,” Stahl demonstrated the utter mindlessness of those who do agree, by asserting that the fact that there were hurricanes and that glaciers were melting in Greenland should cause Trump to say, “I’ve changed my mind. There really is climate change”—which we are supposed to understand means “human beings are causing world-threatening changes to the climate.” Trump responded simply, “And you don’t know whether or not that would have happened with or without man. You don’t know.” When Stahl claimed that there are scientists “who say that it’s worse than ever,” Trump requested her to bring them forward because, “They have a very big political agenda.”

Trump was, perhaps, more truthful than he realizes. The Climate Change agenda is in the millennia-old tradition of those tyrants who seek to protect their “birthright” from common humans. These useless, mega-consuming lords have never understood productive physical or cognitive labor, and so they see those who engage in it as competitors for resources which they do not understand how to produce. 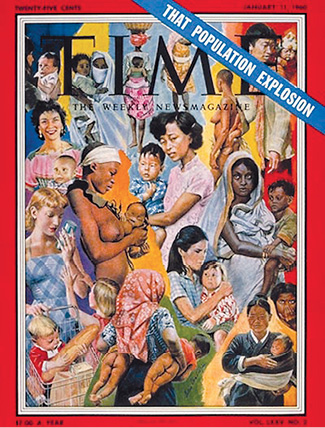 The January 11, 1960 Time magazine cover story, “The Population Explosion,” was one high-profile element in the launching of population control as a dominant factor in twentieth-century culture. This author, as a fifth grader at the time, recalls examining the theory of the piece and concluding, “Of course people eat food and use other things, but everything we have is made by people. How do we get anything if we don’t have people to make it?” His views have developed since then, especially since he encountered Lyndon H. LaRouche, Jr., in 1972. Unfortunately, the “leaders” of modern culture have slipped further behind. 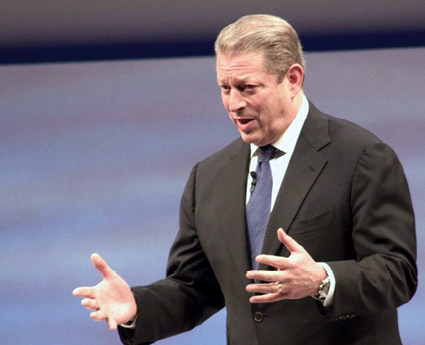 Creative Commons/Tom Raftery
Al Gore gives a keynote address on sustainability at SapphireNow 2010, in May 2010.

The now fallen, self-imagined King of Olympus, Al Gore, was once a prominent leader in this decline of civilization. Gore, the only individual in history to have won both an Oscar and the Nobel Peace Prize—the Peace Prize was shared with the IPCC; the Oscar was not—for the same piece of garbage, has now fallen from grace due to his own disgusting appetites, but his ideas, sadly, live on. Gore is in the British liberal tradition of Bertrand Russell and his collaborator Julian Huxley, which can be summarized as “Obey the King. Forget everything else, especially the future requirements of humanity.” In his 1992 book, Earth in the Balance, Gore summarized his support for Zeus against Prometheus:

We have also fallen victim to a kind of technological hubris, which tempts us to believe that our new powers may be unlimited. . . . In a modern version of the Greek myth, our hubris tempts us to appropriate for ourselves—not from the gods but from science and technology—awesome powers and to demand from nature godlike privileges to indulge our Olympian appetite for more. Technological hubris tempts us to lose sight of our place in the natural order and believe that we can achieve whatever we want.

At the root of this belief lies a heretical misunderstanding of humankind’s place in the world as old as Plato, as seductive in its mythic appeal as Gnosticism, as compelling as the Cartesian promise of Promethean power—and it has led to tragic results. We have misunderstood who we are, how we relate to our place within creation, and why our very existence assigns us a duty of moral alertness to the consequences of what we do.

The Greek myth Gore refers to is the story of the imperial Zeus, who resolved to eliminate his creation, humanity, from existence because it was becoming too powerful and too knowledgeable. Prometheus, whose promise Gore charges “has led to tragic results,” stood against Zeus and rescued humankind by providing it with the knowledge, not only of fire (energy production), but of the full range of arts and sciences.

Fifteen years later, to make sure no one forgot whose side he was on, Gore published a much more succinct book, The Assault on Reason, in which he attacked our society for independently making scientific judgments, rather than following the “experts’ advice” as Trump refused Lesley Stahl’s request that he do. The IPCC has never repudiated its Peace Prize partner, so we must assume that they accept his judgment that they must be believed simply because they are “the experts” and they say so. The nations of the world and all of their great educational institutions have backed the IPCC policy despite their failure to provide any other reason why they should be believed.

A currently leading follower of “the experts” on “climate change” is ex-President Barack Obama. On June 29, 2013, addressing his own creation, the Young African Leaders Initiative Town Hall at the University of Johannesburg-Soweto in Johannesburg, South Africa, Obama pronounced a death sentence against the young people he had assembled.

Think of Obama as Zeus, explaining to his human creatures why they all must die. Imagine yourself, perhaps as Prometheus, deciding exactly what you must do about it. Obama had, and has, no intention of finding “new ways of producing energy.” He has been a militant opponent of nuclear energy, the only “environmentally sound” energy technology available that can do the job. The “Power Africa” project Obama went to visit in Tanzania has emphasized household solar energy production along with biomass, natural gas, and other carbon-burning fuels that fail the “clean energy” test. None of these are adequate to meet the massive industrial development requirements of the 1.3 billion Africans now faced with early deaths from disease, malnutrition, a lack of potable water, and the resulting conflicts caused by the cowardly surrender by the great nations of the world to “the experts.” 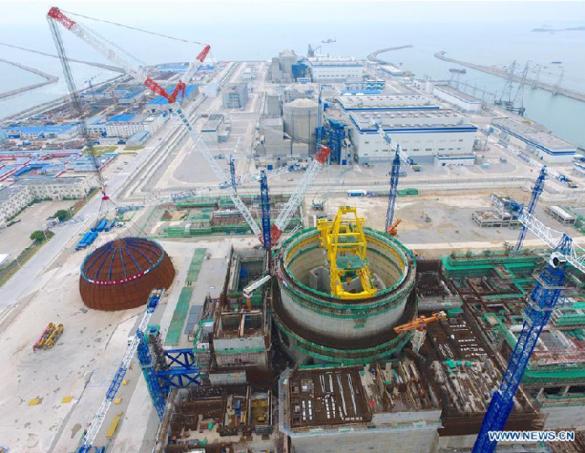 Now is the time to set things right. Though not explicitly challenging the IPCC, China and her collaborators are committed to expanding nuclear power production and other advanced technologies. Trump has shown he is willing to brush aside the demand that he kiss the experts—anywhere. Learn what you have to. There is real science, and we should all get accustomed to thinking critically and scientifically, but the IPCC is the very wrong stuff. 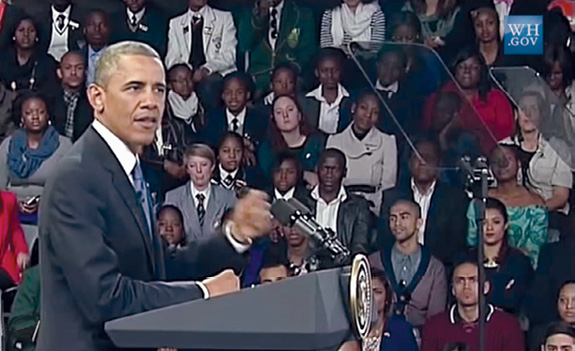