CIIE: China’s Reform and Opening Up Enters a New Era 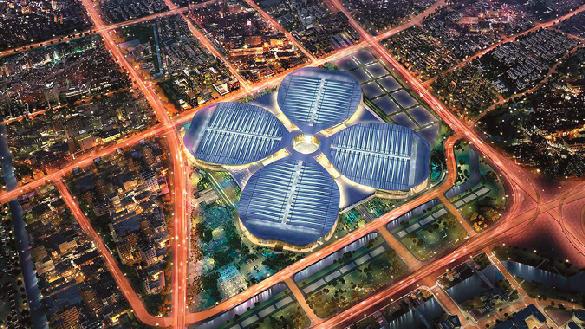 The CIIE was held at the National Exhibition and Convention Center in Shanghai, the world’s largest single block building and exhibition complex, with a total construction area of nearly 1.5 million square meters.

Nov. 11—From Nov. 5 to 10, the City of Shanghai hosted an estimated 400,000 businesses and buyers from every continent to the First Annual China International Import Expo (CIIE), marking a dramatic new phase in China’s phenomenal development in the process of “Reform and Opening Up,” launched exactly 40 years ago by Deng Xiaoping. In those 40 years, China has risen from a large but very poor nation to the second largest economy in the world, has lifted approximately 700 million of its citizens out of poverty, and, over the past five years, has launched the most dramatic international development project in human history, the Belt and Road Initiative (BRI).

President Xi Jinping announced China’s decision to hold an annual CIIE in May 2017, with the first to be held in November 2018. In his opening speech on Nov. 5, Xi called the CIIE an “innovation in the history of global trade,” and an “important decision made by China to pursue a new round of high-level opening-up.” Under the theme of “New Era, Shared Future,” he said that the Expo would “help friends from around the world to seize opportunities presented by China’s development in the new era and offer a platform for us to deepen international business cooperation for shared prosperity and progress.”

More than 170 countries set up pavilions at the Expo, with over 3,600 companies displaying their products and services.

It is indeed a new era for China. As Jack Ma, the co-founder and Chairman of Alibaba (one of the ten largest companies in the world), said at a forum on the sidelines of the CIIE:

I remember in 2001 when China joined the WTO, everybody [in China] was worried, saying the wolf was coming because the other people were manufacturing better and China would be in trouble. But ten years later, people think China is a wolf!

China’s development over these forty years depended initially on exports, utilizing its cheap and abundant labor to manufacture goods (often in foreign-owned companies within China) for export. But at the same time, tens of thousands of Chinese youth were going abroad for education, largely in science and technology fields, while China’s work force acquired skills in the booming export industries. Over time, China’s technological skills became competitive internationally, and its extraordinary level of innovation has made China a world leader in such areas as high-speed rail, bridge and tunnel construction, nuclear and fusion technology, IT, and more. 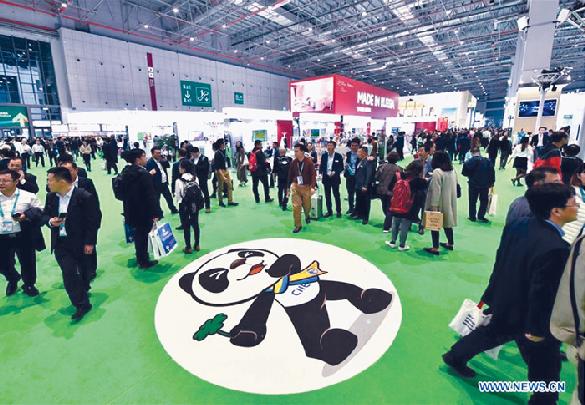 China has now reached a stage at which its internal development allows a shift toward less dependence on exports, and a vast expansion of imports. On the opening day of the CIIE, China Daily called it a “milestone” in China’s impact on the world economy:

China now has more than 300 million middle class consumers, and the number will double in a decade or two, which will be twice that of the United States, and threefold that of the European Union. Last year, China contributed 30% of the world’s economic growth. That China increases imports to meet people’s demands and propel its continued development—it expects to import more than $10 trillion worth of goods and services in the next five years—will benefit countries from around the world and help stoke the global economy.

Indeed, in his welcoming speech, President Xi said that “in the coming 15 years, China’s imports of goods and services are expected to exceed $30 trillion and $10 trillion respectively.”

One obvious implication of this reality is that the huge trade deficit of the United States with China, and that of many other developed nations, can be quite rapidly reduced or even eliminated, as China’s appetite for imports expands. President Trump is aware of that fact and has instructed his advisors to prepare proposals for a new trade deal with China, to be discussed when the two leaders renew their formal personal relationship at a summit planned in Argentina on Nov. 30, on the sidelines of the G-20 summit. This past week, China’s leading foreign policy official, Yang Jiechi, met with Secretary of State Mike Pompeo in Washington, after which Yang reported that they constructively discussed the trade issue. It is also reported that China’s leading economic official, Liu He, may be visiting the United States before the Trump-Xi summit.

The CIIE is an event hosted by China with the support of the WTO and other international organizations as well as a large number of participating countries. It is not China’s solo show, but rather a chorus involving countries from around the world. . . . Together, let us contribute to our common determined efforts to build a community with a shared future and usher in an even better tomorrow for mankind.

Xi emphasized the role of the Belt and Road Initiative, whose intention, he said, is to “set up for the whole world a platform for open cooperation.”

Eighteen heads of state or government attended the CIIE and addressed the opening ceremony along with Xi. Twelve nations were “Guests of Honor”: Indonesia, Vietnam, and Pakistan from Asia; South Africa and Egypt from Africa; Russia, the UK, Hungary, and Germany from Europe; and Canada, Brazil and Mexico from the Americas.

Among the many words of optimism from the leaders attending the CIIE, Uruguay’s Foreign Minister Rodolfo Nin Novoa said the event laid the groundwork for a “new international order” whose purpose is to “create a climate of international concordance among nations.” Dominican President Danilo Medina noted that it was a “superb venue,” not only to sell goods to China, but to learn “about the dozens of other countries present here, from five continents,” since China has become the reference point for “cooperation and connectivity among nations.” Charles Onunaiju, director of the Center for China Studies in Abuja, Nigeria, told Xinhua: “For Africa, there is no better opportunity to redress the so-called imbalance in global trade. China is not just offering investment, infrastructure, financial support, it is now offering market. The most important element in any meaningful development is the market.”

In his welcoming speech, President Xi also addressed the central role of scientific and technological progress as the driving force of peace and development:

It is important for all countries to pursue innovative growth and speed up the transformation of growth drivers. Innovation is the premier engine for development. Only with bold innovation and reform can we break the bottlenecks in global growth. The world economy has just emerged from the shadow of the international financial crisis, and recovery is still unstable. There is an urgent need for concerted efforts of countries in the world to promote scientific innovation and foster new growth drivers. The well-being of humanity is the biggest driving force for scientific innovation.

While the United States did not send any government representatives, the State of California sent a large delegation of officials and businesses. California has the largest volume of trade with China among all the U.S. states, with $175 billion in 2017, which was 27.6 percent of the total U.S. trade with China. Kentucky’s Governor Matt Bevin also headed a delegation of businesses to the CIIE.

U.S. participation in the booming Chinese economy, and especially in the Belt and Road Initiative, is the most constructive means to resolve its huge trade deficit with China, and to renew the close relationship between Presidents Trump and Xi. Schiller Institute President Helga Zepp-LaRouche, known in China as the “Silk Road Lady” for her role, with her husband Lyndon LaRouche, in formulating the concept in the 1990s, said in her Nov. 8 international webcast:

President Xi Jinping gave an excellent speech [at the CIIE], and while he’s a Chinese leader, and he speaks with Chinese characteristics, if you look at the substance, it should remind you of my husband’s approach, that the only source of wealth is the creativity of human beings, which leads to scientific and technological progress, and is then applied in the production process—leading to an increase in productivity, better living standards, and greater longevity.

The Potential Is Great

The potential is great. President Xi described the steps that have already been taken, and those being prepared, for this new stage of “Reform and Opening Up.” These include shortening the “negative list” (sectors of the economy restricted to Chinese ownership), investment liberalization, further opening of the financial and service sectors, raising the foreign equity caps, and more. While these measures were set in motion before the escalation of the trade crisis with the United States, they nonetheless set the agenda for the Trump-Xi Summit at the end of the month.

Xi’s description of China itself in his welcoming speech is an apt conclusion to this report:

China is the world’s second largest economy. We have a market of more than 1.3 billion consumers who live on the land of over 9.6 million square kilometers. To use a metaphor, the Chinese economy is not a pond, but an ocean. The ocean may have its calm days, but big winds and storms are only to be expected. Without them, the ocean wouldn’t be what it is. Big winds and storms may upset a pond, but never an ocean. Having experienced numerous winds and storms, the ocean will still be there! It is the same for China. After going through 5,000 years of trials and tribulations, China is still here! Looking ahead, China will always be here to stay!