This article appears in the November 23, 2018 issue of Executive Intelligence Review. Nov. 16—On October 29, Hussein Askary, the Schiller Institute’s Coordinator for Southwest Asia, addressed the Belt and Road International Food Industry Conference, a high-level event in Beijing, China. The text of his presentation follows this article. The conference focused on the impact of the Belt and Road Initiative (BRI) and China’s development model for food security in China and globally. What stands out about the gathering is the confidence of the participants in deliberating on the actions needed to create a world without hunger, while enjoying of all the differing cultures along the Belt and Road country corridors, through food—by promoting their diverse cuisines, especially (of course) high-quality Chinese favorites. In this way, the “happiness index” will go up, said the Editor-in-Chief of China Food News.

The conference was sponsored by China Food News, the People’s Daily, and Global Times, and was supervised by the Chinese government’s Belt and Road Portal.

Senior Chinese government officials opened the main panel, led off by Liu Jian, the former Director of the State Council Office of Poverty Alleviation, who earlier had served as deputy Agriculture Minister. The second speaker was Sun Yuxi, a Member of the Public Advisory Committee of the Ministry of Foreign Affairs, and former spokesman for the Ministry. Other speakers were Zhang Huarong, the Director of China Green Food Development Center; Dan Chengwei, General Manager of Global Times Network; and Huang Guosheng, Deputy Director of the China Children’s Center.

Hussein Askary’s presentation was titled, “The Impact of the Belt and Road Initiative on Global Food Security.” A full transcript with his illustrations are given below. Askary began by citing the Schiller Institute’s 24 years of work in promoting global connectivity associated with the New Silk Road and the Eurasian-African Land-Bridge. He displayed copies of the two most recent Schiller Institute development reports, published in June 2018 and 2017: The New Silk Road Becomes the World Land-Bridge, Vol. II: A Shared Future for Humanity and Extending the New Silk Road to West Asia and Africa: A Vision of an Economic Renaissance, which Askary co-edited.

Askary expressed his and the Schiller Institute’s gratitude to President Xi Jinping for launching the BRI in 2013. “The BRI has already changed the world, ushering in a new set of international relations based on economic cooperation and mutual development, which will have great implications for food security in the world,” Askary stressed. He elaborated on what this means, looking ahead to a doubling of the world’s population by mid-century, and the task of raising up the level of nutrition for everyone. 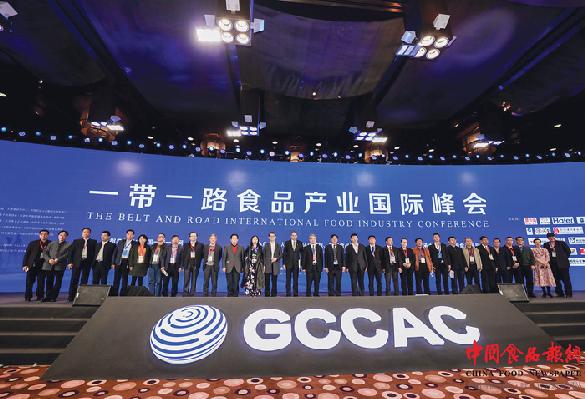 Speakers at the Belt and Road International Food Industry Conference in Beijing.

The Chinese record of achieving food self-sufficiency through deliberate interventions for agricultural advances, along with rural poverty reduction programs, presents a powerful model for world food security. In 1984, China became food self-sufficient, following on economic policies initiated in 1978. Then, since the 1980s, have come a succession of agricultural achievements, improvements in the diet, and the prospect of achieving the goal of complete eradication of rural poverty by 2020.

Askary spoke about this process of deliberate upgrading of the food supply, by showing a table of the improvement in the Chinese diet (by major food groups), from 1995 through 2010, and projected ahead to the goal for 2030. This table was originally presented by Chinese food expert Prof. Mei Fangquan, of the UN Global Food Security Committee, and the Agriculture Information Institute in China, in his presentation on “Universal Lessons of China’s Advancement in Agriculture,” which he delivered to a 2017 food and agriculture conference in New York, co-sponsored by the Schiller Institute. The July 7 event took place on the sidelines of the UN High Level Forum on “Agenda 2030” Sustainable Development Goals, focused on Goal No. 2, Eradicating Hunger by 2030. (Mei’s full presentation is in EIR, May 4, 2018).

China is actively working with international institutions to end hunger, and rural poverty, along with the general goal of poverty eradication as early as possible. In May this year in Beijing, China hosted the 2018 China Poverty Reduction International Forum. In June in Rome, China signed a joint statement on these goals, with the UN Food and Agriculture Organization, the World Food Program, and other agencies. In September in Beijing, China hosted the seventh Forum on China-Africa Cooperation (FOCAC) in which the goal of joint work to raise agricultural productivity in Africa was discussed. The continent of Africa today, with 1.2 billion people and vast agriculture potential, is still import-dependent for 40 percent of its grains. This dependence has been worsening over the past 30 years, but now the BRI era holds the promise of 100 percent food self-sufficiency for Africa in the near future.

The October BRI food conference in Beijing brought together business and trade association leaders in the food industry, and related logistics and social organizations, to confer on resources and further coordination among countries along the Belt and Road. The conference—regarded as “an international food summit”—was integrated into another conference held simultaneously in Beijing October 29-30, under the title, “The Belt and Road Global Chambers of Commerce and Associations,” GCCAC. The food summit received wide media coverage.