This transcript appears in the November 23, 2018 issue of Executive Intelligence Review. 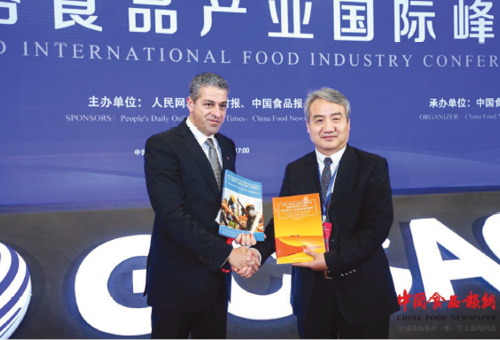 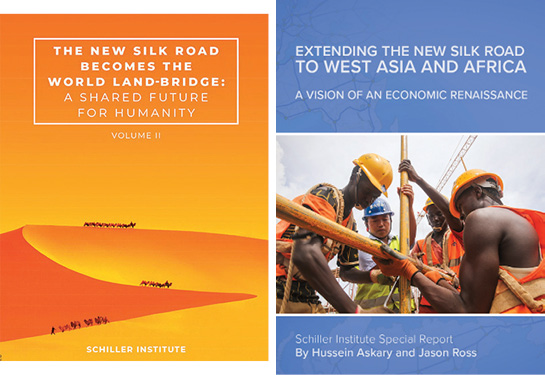 This is an edited transcript of a presentation by Hussein Askary, a member of the China-Sweden Business Council (CSBC) and the Southwest Asia Coordinator for the Schiller Institute, to the Belt and Road International Food Industry Conference in Beijing, China on Oct. 29, 2018.

Thank you very much. I’m honored to speak in this esteemed and wonderful forum, with this wonderful organization. I thank the sponsors for inviting me to speak in this very important conference. I would also like to thank all the wonderful young volunteers and assistants who have helped a lot.

My name is Hussein Askary. I’m a member of the China-Sweden Business Council that is dedicated to promoting economic, business relations between my second home country, Sweden—I’m Iraqi by birth—and China, for the common benefit of both Sweden and China, but also other countries in the world. The China-Sweden Business Council also contributed last month in launching the first Belt and Road association in Sweden, called the Belt and Road Executive Group for Sweden, the BRIX, to promote the importance of the BRI and the importance of Sweden participating in that project.

At the same time, I’ve been a member of an international think-tank called the Schiller Institute, and in the past 24 years since I joined this Schiller Institute, both the Institute and I have dedicated enormous time and energy to promoting the idea of rebuilding the Silk Road, a New Silk Road, to connect all nations with modern infrastructure projects: a just new world economic order.

We have produced many studies and reports. The two most recent are [Figure 1] The New Silk Road Becomes the World Land-Bridge, Vol. II: A Shared Future for Humanity, and Extending the New Silk Road to West Asia and Africa. They present our concept of global connectivity. We have been calling on nations, especially in the West, to go for this kind of new economic order in the world. Our call was finally answered by His Excellency President Xi Jinping in Kazakhstan in September 2013, when he announced the Silk Road Economic Belt. That was a very special day for both me personally and for the Schiller Institute, because we do believe that this opened a new era in international relations, a new era in the history of the world.

BRIX Sweden
The Belt and Road is changing the world in a positive direction, creating new relations among nations through economic cooperation and development.
View full size 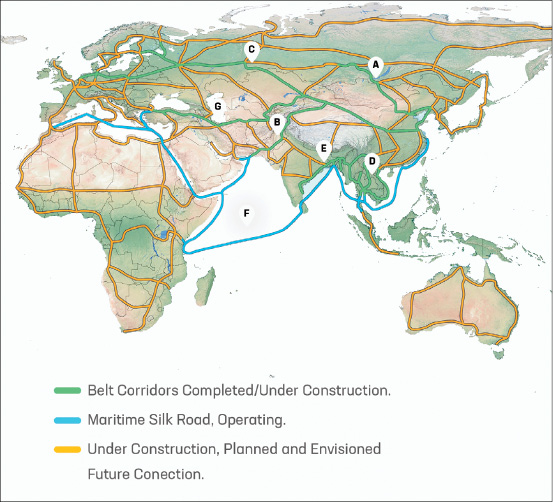 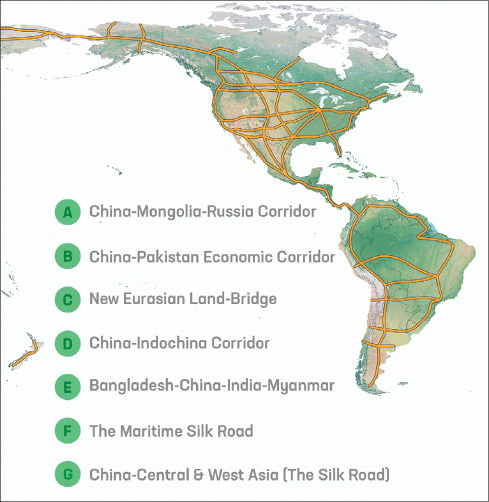 Belt & Road is Transforming the World

The Belt and Road is already changing the world into a positive direction, creating new types of relations between nations, through economic cooperation and economic development. [Figure 2] But without China’s amazing industrialization process in the last 30 years, this would not have been possible. And in that sense, China, also, has learned from the rest of the world in this process. Now it’s time for the world to also learn from China. As the great philosopher Confucius said: “He who thinks but does not learn is in great danger.” That should be the principle now. 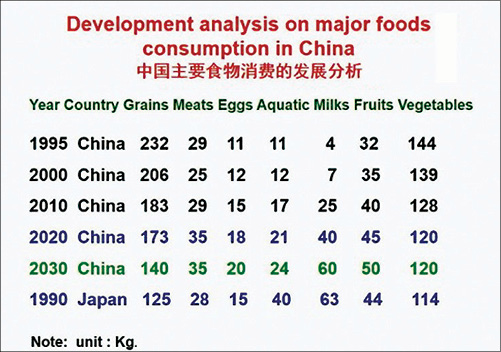 The Belt and Road will transform living conditions in all countries it reaches and works in. This will lead to higher standards of living as has happened in China: You here in China have experienced this. The Belt and Road will have enormous impact on the production and consumption of food. [Figure 3] Professor Mei Fangquan, from the Agriculture Information Institute in China, and Chief Expert of the UN Global Food Security Committee, has studied the changes in food consumption in China going back to 1995, with projections into 2030. You can see a very special development in the middle of the chart, where protein production and consumption are listed. There is a dramatic increase there, especially in milk production, but not in the production of grains and vegetables.

This is not a luxury question. In the early years of a child’s growth, it is very important to have a protein- and calcium-rich diet. As children grow older, they don’t need as much. So you have to be careful about that. It’s very important for children in their early years to have this kind of diet.

Now, this chart also shows a projection into the future, with a comparison with Japan. Imagine this happening in most countries in the world, especially the underdeveloped countries of the world today. Imagine how much more land and how much technology and infrastructure will be necessary to meet the needs of people.

The world is, indeed—in spite of the Belt and Road—not devoid of challenges. As our earlier speaker mentioned, a report issued by the United Nations on world hunger levels shows places in the world where things are improving. However, there are still 800 million people in the world who cannot meet their needs for food. [Figure 4] 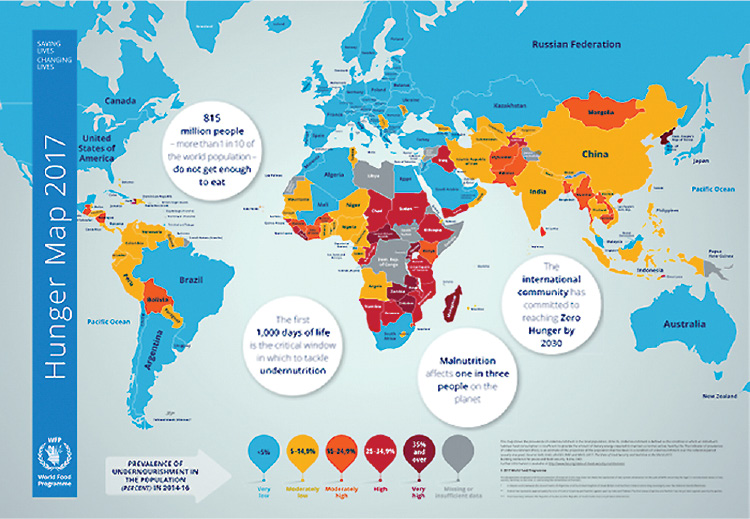 The map shows the location of these countries. There are very big challenges. As the Belt and Road advances, we will have to think very seriously about the challenge we are undertaking. It took humankind 10,000 years from the invention of agriculture to increase the annual food production to 7 billion tons per year. That’s what it took, 10,000 years. The world’s population will double, most probably by 2050. This means that we will have to double what took 10,000 years—we have to double that production in 30 years. This is what is amazing and fascinating about the prospects for the Belt and Road. Such a feat can be achieved, even with today’s technology!

Now look at the countries located in this area. There are two kinds of problems: First you have scarcities. You have physical scarcity of water and you have economic scarcity of water, which I will discuss. But also, you have what China has correctly identified as three bottlenecks in these countries: the lack of capital, the lack of infrastructure, and the lack of skilled labor. Notice the location of these countries along this map. Now, let us look at the next map [Figure 5], an exaggerated map of the world’s dry areas. These are deserts, semi-arid areas, and arid areas (not complete desert), but these are all very dry regions. 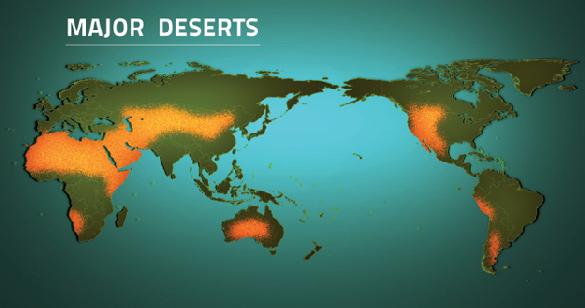 As you can see, this is not a national, a regional, nor even a continental problem—it’s a global challenge. It’s a transcontinental challenge, which requires the cooperation of many, many nations.

The Belt and Road promises to solve this problem. At the Forum on China-Africa Cooperation, just last month, President Xi Jinping mentioned that controlling desertification will be one of the priorities of cooperation between China and Africa. And I have seen, myself—I have had personal contact with Chinese companies that have been very, very successful in this aspect. China’s contribution, even in this respect, will be very, very important. 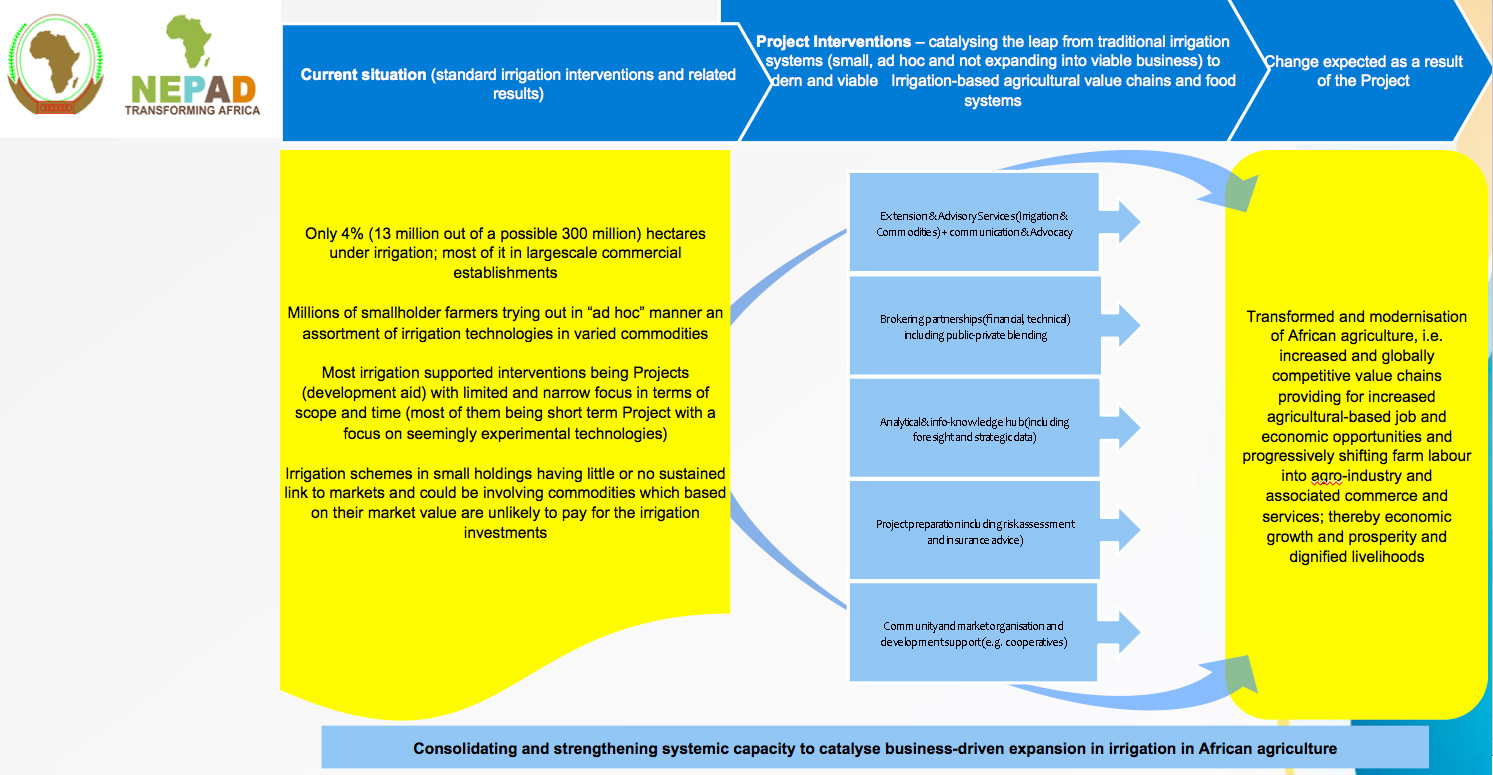 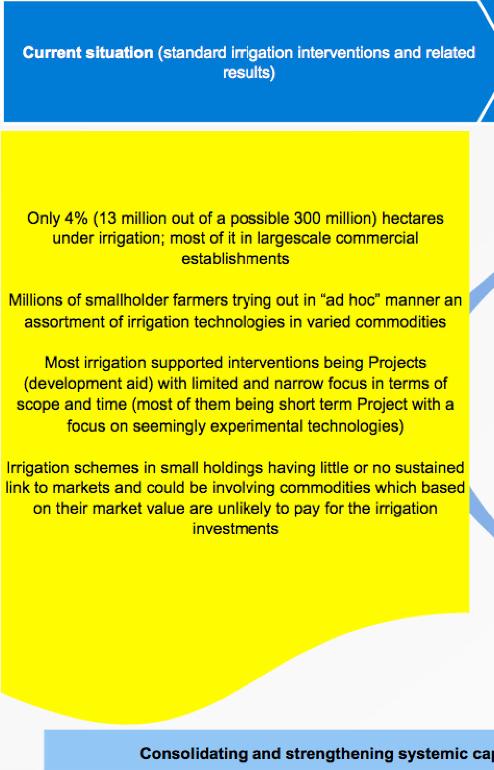 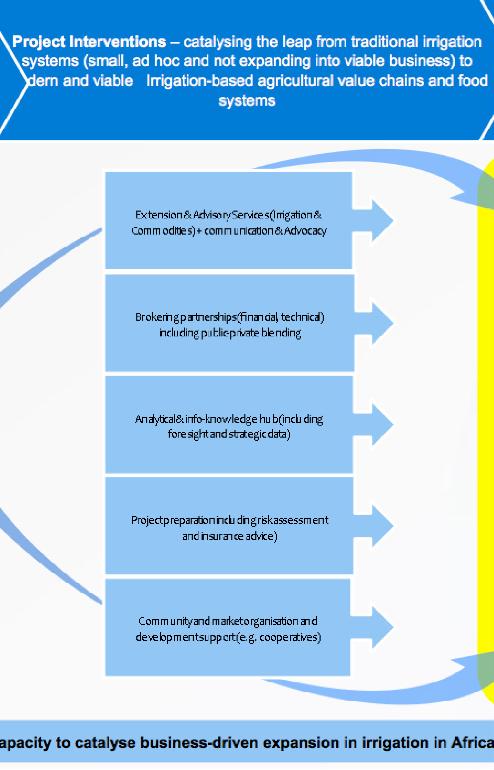 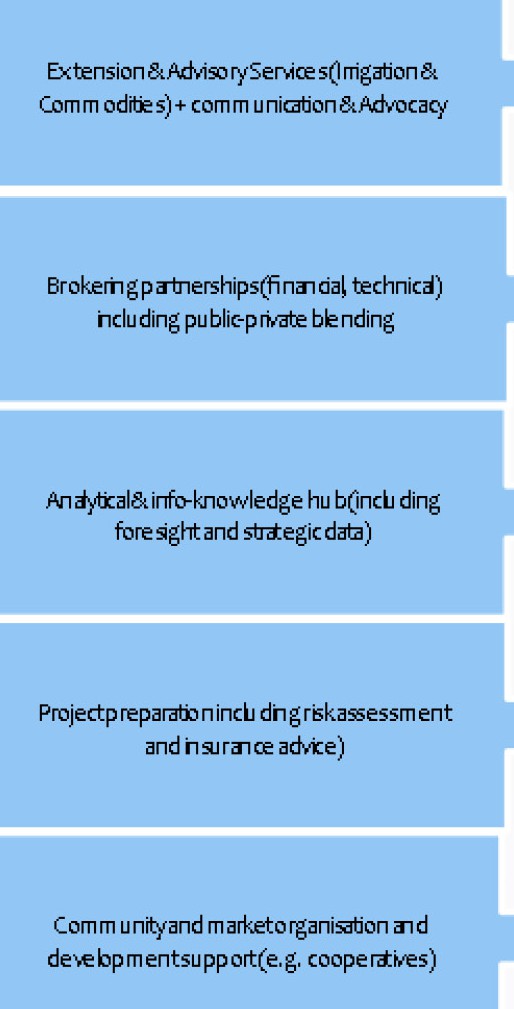 A friend of ours, Moussa Seck of Senegal, developed a project [Figure 6] that has now been adopted as an official strategy for the “New Partnership for Africa’s Development” (NEPAD) countries. His Excellency [Mr. Messan Amakoé Klutse, from Togo] mentioned there are many parts of this project being established or worked on in Africa. But you will need much, much more. As you see on the NEPAD document, showing the situation as it is today, only 4% of all arable land in Africa is irrigated! Africa has a potential of 300 million hectares of land to be irrigated; but only 13 million hectares are irrigated. Just imagine what could be done were adequate infrastructure in place, such as irrigation, transport and power. Without power you cannot do anything, even in agriculture. If we transform the current situation to where it should be by 2025, if this policy is successful, with the help of China with many other countries participating, we will be able to eliminate hunger in Africa by 2025. But it will require massive investments in infrastructure and education, and in scientific research. 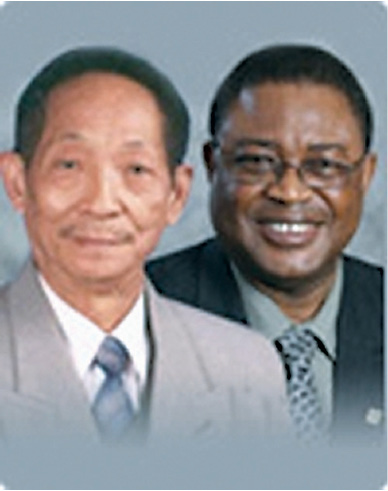 You may be familiar with these two gentlemen, Dr. Yuan Longping and Dr. Monty Jones. They shared the UN Food and Agriculture Organization’s 2004 World Food Prize, the “Nobel Prize” for food production, for their independent research into new breeds of rice. [Figure 7] This is what it will take to eliminate hunger from the world.

We will need massive investments in infrastructure, as I said, and we will also need systems of education, new types of agricultural products, new types of managing agriculture, new types of handling agricultural products and so on and so forth. Look at the map in Figure 8. That area, according to the Food and Agriculture Organization, is an optimal area for production of maize, corn. This area is as large as China itself. With availability of this type of infrastructure platform, the entire area will be transformed. 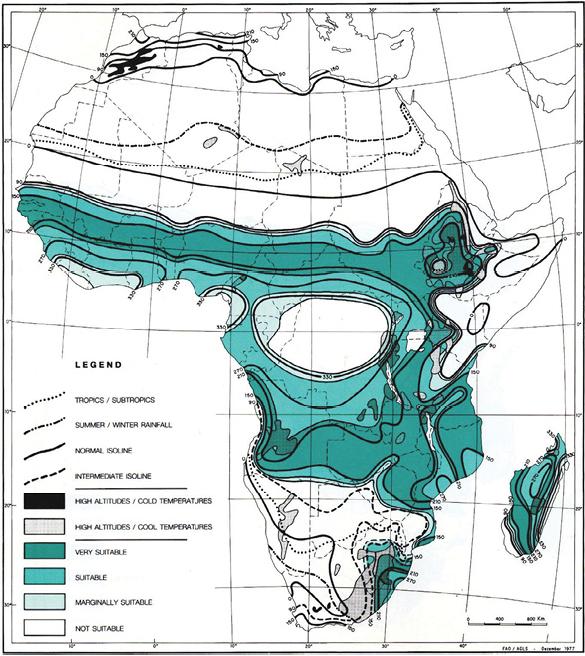 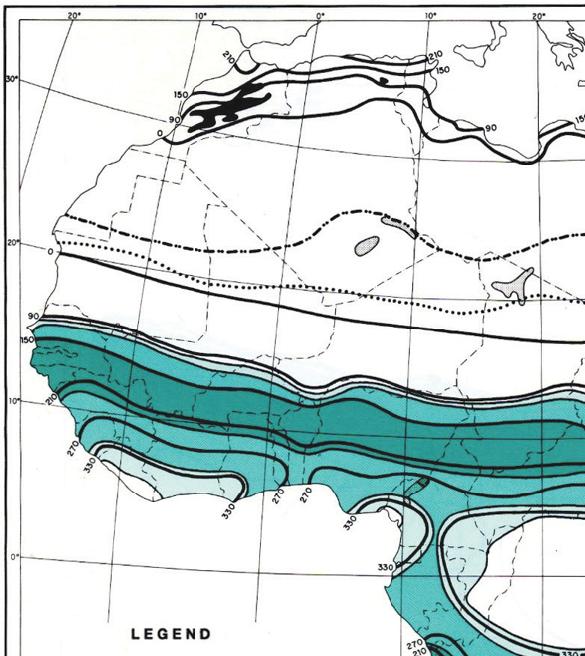 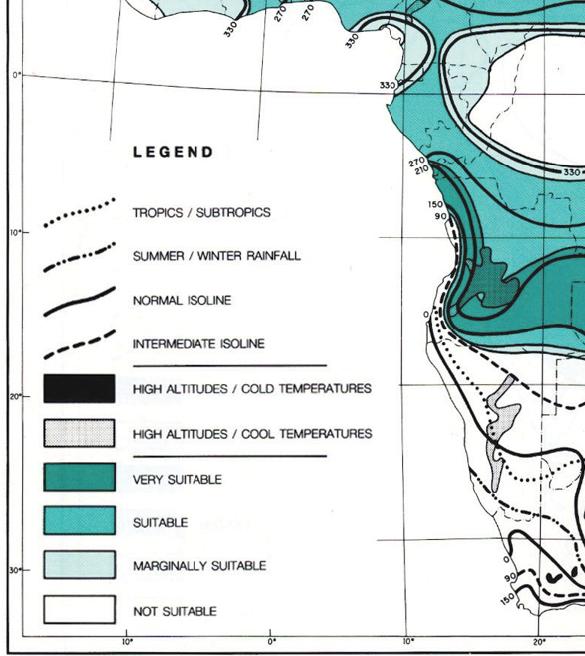 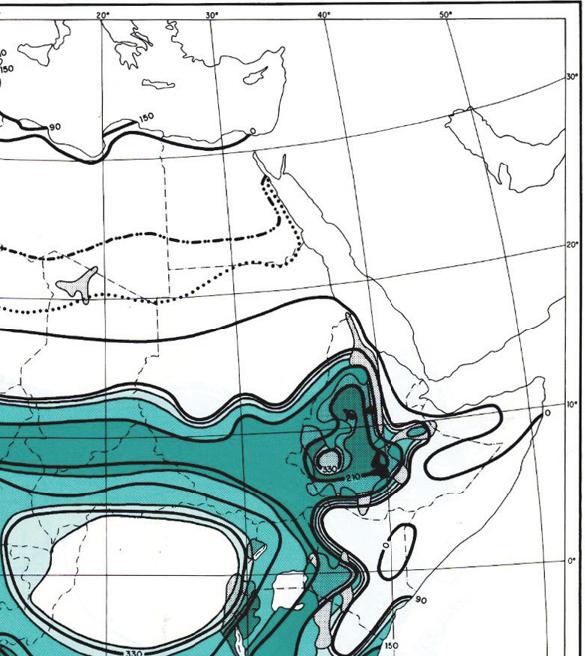 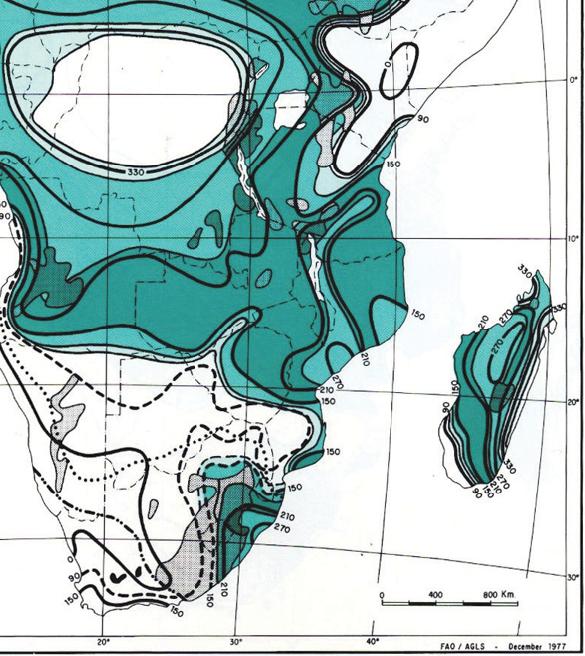 I could spend the whole afternoon telling you about all the wonderful projects being built, all the wonderful projects being planned, but I will stop here, because we don’t have time for that. I want to end by saying that from where I stand and look at the world, I see a great promise for the whole world. One very strong reason for my optimism is the Belt and Road Initiative and the miracle that China has achieved.

If you have any questions or inquiries, you can visit us at the China-Sweden Business Council desk on the second floor. I thank you very much, xièxiè.

CC/SkyPixels
The Katse Dam in Lesotho, one of many projects planned and built to bring a prosperous future to Africa.