“For if the trumpet give an uncertain sound, who shall prepare himself to the battle?” 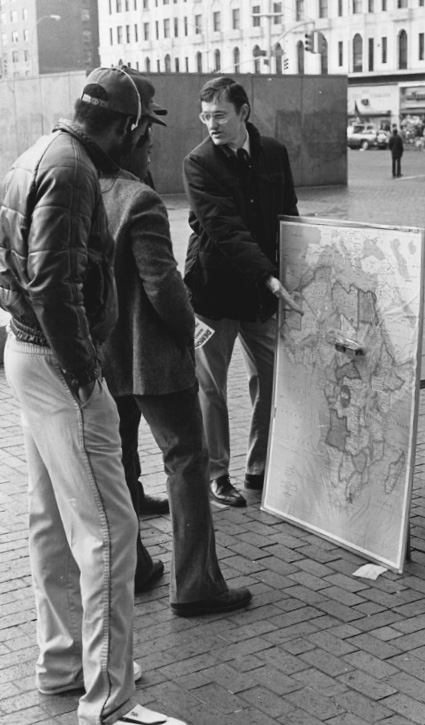 Nov. 23—EIR managing editor Douglas DeGroot passed away unexpectedly on October 31, at the age of 75. Doug was associated with EIR as an Africa specialist from before its first issue in 1974. He had joined the LaRouche movement in 1973, while teaching school in Philadelphia.

Doug grew up on his parents’ farm in the southwest corner of Minnesota, in a home with no television. Music was the family recreation. Doug sang in school and church, and the family often gathered around the piano or the electric organ in their home. One of his sisters took that music into a professional career as an opera singer. Doug became a tenor in the Schiller Institute Chorus. He also had a passion for the trumpet from the time he played in his high school band. But he never had formal trumpet training until he began lessons seven years ago, fulfilling a life-long dream. After taking up the trumpet again, he often played at special church services.

Doug first saw his father when he was 9 months old, just before his dad shipped out to the Philippines in December 1943, after Army radar instruction. His father came back to farming after the war. As on all family farms, the children are expected to help. By the age of six, Doug could keep a tractor at a crawl while the men pitched bales of hay onto the wagon behind. His first years of schooling took place in a one-room, country schoolhouse; he completed his education at Calvin College in Grand Rapids, Michigan. While there, Doug was accepted by President Kennedy’s Peace Corps, and completed intensive training in French to prepare him for an assignment in French-speaking Africa.

For two years, beginning in September 1965, he taught English as a second language in Cameroon, the southern neighbor of Nigeria. Doug taught in the small village of Saa, northwest of Yaoundé, the capital. During summer break, he helped to organize village leaders—and anyone else willing to help—to build a road from Djaga to a nearby village then unreachable in the rainy season. Building the road required the construction of 2 bridges. Upon completing his Peace Corps service, Doug submitted a proposal to the government to build a school in Deuk—where volunteers had already poured a foundation and located teachers willing to teach there.

Doug’s experience in the Peace Corps kindled his passion to see African nations develop from their battered, impoverished post-colonial existence to nations fully participating in the science, the technology, and the living standards of the 20th century. When he left Africa, he thought that the most important thing he had done was to build the road. It was not until years later that he realized the importance of his teaching; that truth was brought home to him by a former Cameroonian student, who recognized Doug in Bonn, Germany and thanked him.

On his return to the United States from his Peace Corps service, Doug taught mathematics in Philadelphia’s inner city, where he met and joined the LaRouche movement in 1973.

In April 1975, the LaRouche movement published LaRouche’s proposal titled, How the International Development Bank Will Work, to which our fledgling intelligence staff added chapters on three major development projects, to illustrate what had to be done in Asia, Africa and Southwest Asia. This milestone publication provided conceptual direction that has leavened much of our work, including Doug’s work, down to the present day.

Doug came to the fore in 1978. We held a conference on “Mideast Peace and Economic Development” in New York in January, followed in May by a Washington conference on “The Industrial Development of Southern Africa,” at which Doug spoke. We were aware of the historic republican commitment among South Africa’s Afrikaners, and hoped to encourage such tendencies, with an eye to a future in which all South Africans, black and white, would be citizens of a republican, industrial state. Doug was commissioned to write an historical study for publication in advance of the conference. We published his paper, “The Origins of Apartheid: Three Centuries of the British System in Southern Africa,” as a pamphlet, which included “A Development Proposal for the Industrial Development of Africa,” written by his colleague, Carol Cleary.

Doug had responsibilities other than intelligence, but from 1974 onward he exposed in EIR (and in our newspapers New Solidarity and New Federalist), many of the threats—on multiple levels—to African development. These threats included the British empire and its Commonwealth, the IMF, Prince Philip’s World Wildlife Fund, George Soros, the International Criminal Court invented by Soros, the drug plague, and the Ebola virus. He travelled to Nigeria, Niger, Côte d’Ivoire, Sudan and South Africa to learn more and to educate.

From 2010, he took note of China’s positive intervention in Africa in, for example, “Why Do the British Want Asia Out of Africa?” (EIR, January 22, 2010). Doug’s work through 2012 is reflected in a survey article written to honor Lyndon LaRouche’s 90th birthday, “LaRouche Has Stood with and for Africa” (EIR, September 21, 2012).

In 2017, for the Schiller Institute’s special report, Extending the New Silk Road to West Asia and Africa: A Vision of an Economic Renaissance, he wrote the section on transport in West and Central Africa. His final article in EIR was titled, “Ethiopia: Dramatic Policy Shift Puts Regional Development at Center Stage” (July 27, 2018), written while he was also the EIR managing editor, in which capacity he had served since early 2015.