Janet Yellen Has Yet to Understand: Monetarism of All Stripes Must End 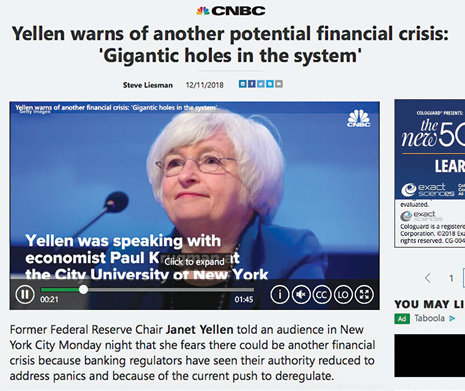 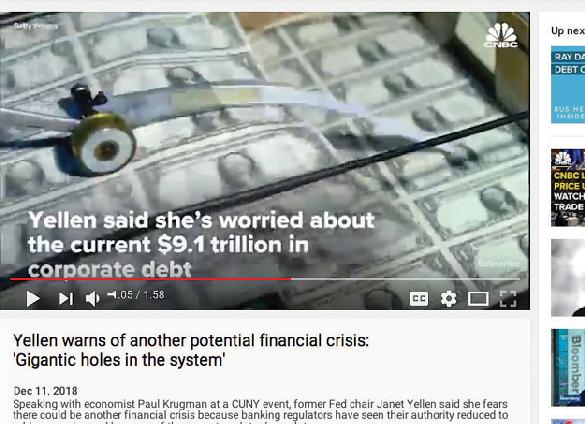 Dec. 14—In an interview on June 27, 2017, Federal Reserve Chairman Janet Yellen asserted that the Fed had “learned lessons” from the 2008 financial crisis. As a result, she said, “the system is much safer and much sounder. We are doing a lot more to try to look for financial stability risks that may not immediately apparent but to look in corners of the financial system that are not subject to regulation, outside those areas to try to detect threats to financial stability that may be emerging.”

Asked if there will be another financial crisis, she replied, confidently, “I do think we’re much safer and hope it will not be in our lifetimes, and I don’t believe it will.”

Yellen, who served as chairman of the Fed from February 2014 until February 2018, was singing a decidedly different tune this week, when she was interviewed by economist Paul Krugman on December 10. The business news channel CNBC-TV headlined its coverage of the interview, “Yellen Warns of Another Financial Crisis: Gigantic Holes in the System.” In that interview, Yellen acknowledged that all is not well: “Corporate indebtedness is now quite high, and I think it’s a danger that if there’s something else that causes a downturn, that high levels of corporate leverage could prolong the downturn and lead to lots of bankruptcies in the non-financial corporate sector. I think a lot of the underwriting of that debt is weak,” as it had been preceding the Crash of 2008.

She continued, noting that non-financial corporate debt is now double what it was in 2007, up to $9.1 trillion, compared to $4.9 trillion. Regulators’ powers to address debt panics have been reduced and “are not great in the United States.” In conclusion, she said that in contrast to her “not in our lifetimes” statement of nearly two years ago, she now worries “that we could have another financial crisis.” It would seem that she is now admitting that the Fed’s so-called efforts to “detect threats to financial stability,” which she proudly hailed in the 2017 interview, have been less than successful!

A similar warning came from Federal Reserve Governor, Lael Brainard, who told the Peterson Institute on December 7 that there are “strains” in the corporate leveraged loan market, exacerbated by “deteriorating underwriting standards,” and the fact that the largest twenty banks do not have adequate “crisis capital buffers” to withstand a blowout of the corporate debt bubble. The New York Times chimed in with an article on December 12, headlined “Are you ready for the financial crash of 2019?”

It maybe useful that some so-called experts and policy makers are coming around to recognize, ten years after the Crash of 2008, that the policies they pushed in response have greatly increased the vulnerabilities of the global financial system. More importantly, these alarms demonstrate that, as Lyndon LaRouche insisted repeatedly after the Crash of 2008, the causes of that collapse have never been addressed: It is the underlying assumptions that are wrong. Those stupid and completely incompetent assumptions are what have put the global economy in danger of an all-out collapse.

Instead of re-regulating the financial system in 2008, beginning with restoring Glass Steagall banking separation, and putting the largest banks and financial institutions through orderly bankruptcy reorganization—which would have included a drastic write down, or write-off, of bloated financial paper, such as derivative obligations, collateralized loan obligations, and swaps—central banks, with full support of western governments, provided a flood of cheap, or free money through “Quantitative Easing” (QE). That QE, a welfare hand-out for super-rich speculators, allowed financial institutions to continue trading worthless paper assets. Those assets were kept on the books at face value or higher. The central banks were all committed to a non-ending process of bail out.

Risk taking, in fact, increased. Public and private debt has grown by 60% since 2008, and now constitutes, as seemingly acknowledged by Yellen and others, a potential trigger which can blow apart the financial system. Only the stupid and incompetent assumptions remained rock solid. The unsustainable debt is merely the symptom of a deeper problem, which Yellen, Krugman, and other such left-wing and right-wing monetary theorists, perhaps blinded by their flawed axioms, have been seemingly unable to see. An economy is not made of money: Economic wealth is produced only by man’s ability to transform nature through scientific discovery and the development of new technologies, which increase man’s power over nature.

That idea of expanding productive physical-economic wealth is the core of Lyndon LaRouche’s science of physical economy, and why his earliest forecasts in the 1950s and 1960s were unrivaled. LaRouche’s forecasts were rooted in the American System of Alexander Hamilton and his successors, including John Quincy Adams and Abraham Lincoln.

LaRouche’s economics is based on his application of Leibnizian dynamics, which are echoed in Vladimir Vernadsky’s concept of the Noösphere, and taken further by LaRouche in his 1952 breakthroughs in the integrated role of scientific and artistic human creativity in the economy as best modeled by Bernard Riemann’s methods. That discovery, and its implications, is extensively discussed in the November 21, 1993 article by LaRouche, reprinted in the August 11, 2017 issue of this magazine. Study of his “Triple Curve” collapse function, which he developed in 1995, which exposes the flaw of focusing on financial and monetary instruments, to the detriment of the real, physical economy, should be mandatory for anyone claiming to be an economist, or a policy maker.

LaRouche’s 2008 article, “Not Only Socialists Were Duped. The Fraud of ‘Free Trade’ ” is reprinted in this issue of EIR.

The almost 50-year economic devolution of the United States, fueled by the so-called consumer-driven economy, can be seen in the devastation of the once-industrialized Mahoning Valley in Ohio, where the city of Youngstown is located. This area was hit by a shock on November 26, when General Motors (GM) announced the end of production at its Lordstown plant. This decision resulted in 1,500 layoffs, on top of 3,000 laid off there in 2017, and is part of the almost 15,000 auto workers laid off from GM. The company defended the shutdown as an effort to “take proactive steps to improve overall business performance, “adding that restructuring will continue, to “accelerate its transformation for the future.” 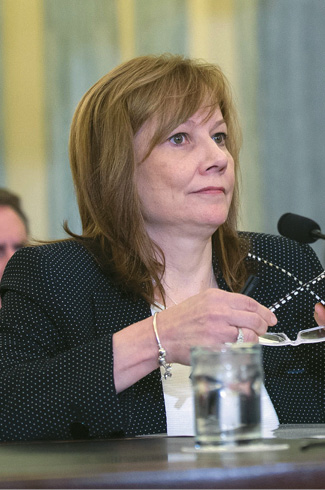 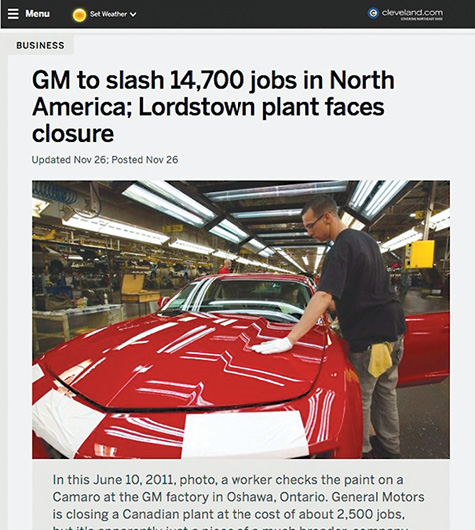 GM’s CEO, Mary Barra, was more clear on the motivation, saying the corporation is “very focused on increasing shareholder value.” What neither she nor anyone else said is that the money received by GM from the recently-passed tax cuts was invested in buying back its own stock, instead of investing in improvements in plant and equipment or hiring more productive workers. Further, the production of cars will now be outsourced, from the Ohio plant to one in Mexico.

With this announcement, the stock of GM jumped up, and “Automotive News,” an industry publication, named Barra “Industry Leader of the Year.”

The is the latest in a wave of deindustrialization in the Mahoning Valley. Between 1977 and 1982, 50,000 jobs were lost there in steel and related industries, with spin-off economic effects increasing over time. Between 2001 and 2010, the population of Youngstown fell from over 82,000 to 67,000, and the city became a center of opioid addiction, and drug and alcohol-related deaths. The case of Youngstown is documented in a report by Sherry Linkon and John Russo, published on November 28, 2018 in the CityLabDaily blog.

What has occurred in the Mahoning Valley due to the post-Kennedy triumph of monetarist economic policies of the neo-liberal variety is a microcosm of what has afflicted the U.S. economy as a whole. The casino economy has replaced physical production. In 1953, 32% of jobs in America were in manufacturing. By 2015, that had shrunk to 8.7%. Manufacturing’s share of GDP was 28% in 1955; in 2015, it had fallen to 12%. And since 2000, there has been a decrease by more than 5 million manufacturing jobs in the U.S., and real wages have not increased from 1999 levels.

Janet Yellen may have come to realize that she and allied economists were mistaken in their belief that they had addressed the causes of the Crash of 2008, but she has yet to publicly acknowledge the relationship between the dominant theories of neo-liberal monetarism and the deindustrialization it has fostered. The “debt crisis,” were it to be solved by a return to FDR’s Bretton Woods approach—this time with a U.S.A.-China-Russian-India agreement, could safely sort out the debt, writing off the grossly-inflated speculative portion. Economic recovery, for all those, young and old, now suffering, can then be generated by a return to the American System, embodied in Lyndon LaRouche’s Four Laws.

The otherwise deadly crisis for civilization can be averted and reversed with Glass Steagall banking regulation; a Hamiltonian credit policy run through a National Bank, not a private central bank; investment in developing new platforms of infrastructure, with an emphasis on investing in the frontiers of science—these Four Laws of LaRouche must be put before the Congress at once.

President Trump has spoken favorably, during his campaign and after, of the principles of the American System. The unconstitutional assault against him, with Russiagate, has been concocted by the same London-centered networks which slandered LaRouche, and deployed Robert Mueller in the 1980s as part of the “get LaRouche” task force, to discredit LaRouche, and remove him from the position of influence he had achieved, due to his economic and scientific work. There is still time to act before the entire system implodes under the weight of five decades of British-directed insanity, but not much time.