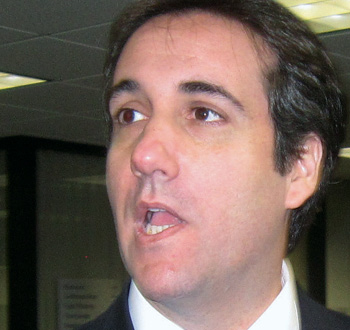 Dec. 13—While much can be said about the schlemiel Michael Cohen, President Donald Trump’s former lawyer, one aspect of this character, in his present witness-for-the-prosecution costume, struck me and led me to ask the question in the title above. That aspect is located in the following excerpts from Cohen’s bizarre sentencing allocution in federal court on December 12:

I take full responsibility for each act that I pled guilty to, the personal ones to me and those involving the President of the United States of America. Viktor Frankl, in his book, Man’s Search for Meaning, he wrote, “There are forces beyond your control that can take away everything you possess except one thing, your freedom how to choose how you will respond to the situation.”

Your Honor, this may seem hard to believe, but today is one of the most meaningful days of my life . . . I have been living in a personal and mental incarceration ever since the fateful day that I accepted the offer to work for a famous real estate mogul whose business acumen I truly admired. . . . It was my own weakness and a blind loyalty to this man to which led me to choose the path of darkness over light . . . Recently the President Tweeted a statement calling me weak, and he was correct, for a much different reason than he was implying. It was because time and time again I felt it was my duty to cover up his dirty deeds rather than to listen to my own inner voice and my moral compass.

My weakness can be characterized as blind loyalty to Donald Trump, and I was weak for not having the strength to question and refuse his demands. I have already spent years living a personal and mental incarceration, which no matter what is decided today, owning this mistake will free me to be once more the person I truly am.

What shines through here are the histrionics. They are very typical of former members of alleged cults who have been “deprogrammed” by anti-cult kidnappers and practitioners. Frankl’s psychological theory, much quoted by deprogrammers, stems from his experience in the Holocaust. Trump Tower certainly is not a concentration camp. Otherwise, here and elsewhere Cohen has taken to describing himself as a lost slave ordered to engage in a string of crimes by a charismatic authoritarian.

For anyone familiar with Cohen’s previous biography, this is obviously false. His wife’s family includes a doctor who rendered services for the Lucchese organized crime family. Cohen went to the finest schools and had a partnership at a major New York law firm, before positioning himself to be hired by Trump. His taxi-medallion side business, which netted him millions, involved partnerships with felons. His side real estate transactions involved millions in cash to undisclosed buyers, raising the specter of money laundering. None of this had anything to do with the $500,000 per year he received in his job for the Trumps.

In the LaRouche case, Boston prosecutors, overseen by Robert Mueller, revealed, in discovery, documents showing that witnesses used by the prosecution, who had been members of the LaRouche movement, had all been “deprogrammed.” Studies of this process have shown, definitively, that memories are altered in this process, salacious and fictitious memories and legends are created, and, most important, the heightened suggestibility produced by the process allows for transference of responsibility for actions, real or fictitious, to the person targeted as the malevolent force.