Will the United StatesWake Up to the Chang’e-4 Shock? 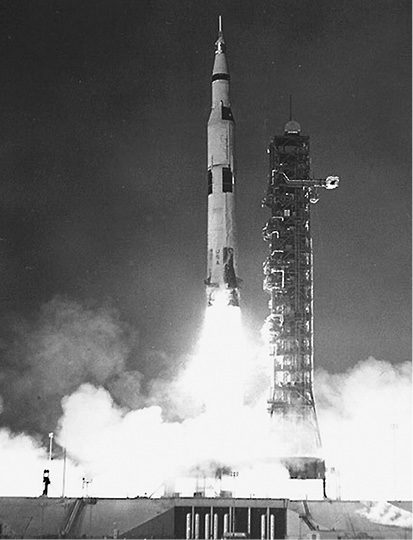 NASA
Lift-off of the Saturn V carrying the Apollo 8 astronauts. 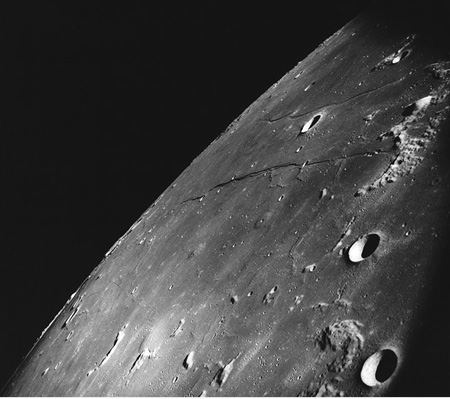 NASA
A close-up view of the Rupes Cauchy lunar escarpment as taken from Apollo 8.

Dec. 16—This year marks the 50th anniversary of a remarkable event in space history that transformed America’s leadership in the race for space. On December 21, 1968, the crew of Apollo 8 became the first American astronauts to do what no one anywhere had ever done before. Led by Commander Frank Borman, together with crew-mates Jim Lovell and Bill Anders, Apollo 8 voyaged out into new territories of space, aboard the first manned mission to fly the massive Saturn V rocket beyond low Earth orbit all the way to the Moon, orbiting it six times. The Apollo 8 crew made many great discoveries on that voyage. They were to be the first humans ever to see the far side of the Moon. They were the first to see the Earth as a whole planet in space, and to witness an earthrise, during their lunar orbits.

Apollo 8 was the first manned launch of the remarkable Saturn V rocket to the Moon—a stunning undertaking in and of itself, just to get off the planet with this beast of a spacecraft. The Saturn V was a three-stage chemical rocket and heavy launch vehicle, its first stage powered by a cluster of five huge F-1 engines, each weighing 15,650 pounds, and each with a thrust of 1,500,000 pounds. These engines brought the rocket to a speed of about 6,000 miles per hour.

The Saturn V remains the only launch vehicle ever to transport human beings beyond low Earth orbit (LEO). No Saturn rocket ever failed catastrophically in flight. As of 2018, the Saturn V remains the tallest, heaviest, and most powerful rocket ever brought to operational status, and holds records for the heaviest payload launched and largest payload capacity to low Earth orbit of 140,000 kg (155 tons).

Apollo 8’s voyage to the Moon paved the way for the next big leap in human space exploration, to finally fulfill the mission envisioned by President John F. Kennedy nearly ten years earlier, when on May 25, 1961 he called for the most vigorous economic recovery and space exploration program our nation had ever seen, to “send a man to the Moon and return him safely to Earth, before the end of the decade.” It was just seven months after Apollo 8 that the crew of Apollo 11 became the first Americans—the first humans—to land on the surface of the Moon, on July 20, 1969. 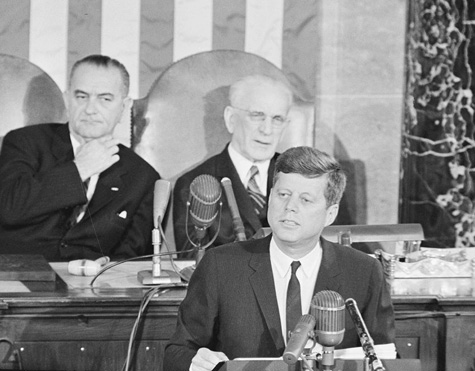 As we reflect on these remarkable achievements of creative leaps in the exploration of space, we must not see them as individual events happening in a vacuum. Enormous hard work and talent went into these missions, and the ones that preceded them were just as critical. I will not detail every mission leading into the historic Apollo 8 or the first lunar landing that followed. Let us be clear, however: None of these achievements would have been possible without visionary leadership as was expressed by President John F. Kennedy, and carried forward by the great space pioneers. As the saying might go today, “Where there is no vision, the space program will perish.”

The program outlined by Kennedy in May 1961 would not have been possible with a totally privatized space program, one based on purely short-term profit-making motives of a commercial space sector. The Apollo program was a national mission, and it became a driver to fully increase the productivity of every sector of the economy. To fulfill President Kennedy’s mission required exactly what he called for—marshalling all of our national talents and resources. It required rigorous research and development programs, and massive apprenticeship and skills training programs. 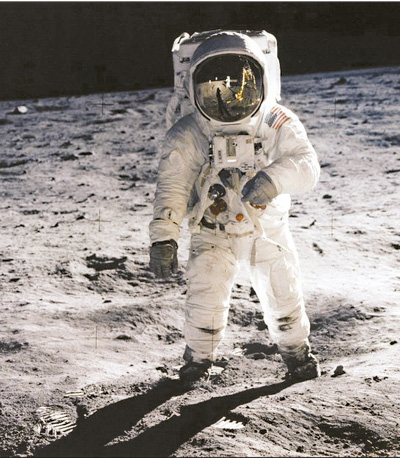 This goal which President Kennedy outlined, was met with much opposition then, as it still is today, but the scientists and leaders of the Apollo program were determined to see the program through; and to reach the goal that Kennedy set forth, they were also, as Kennedy was, looking far beyond.

The push-back against the Apollo program began almost immediately after Kennedy laid out his vision for manned space exploration. With the budget cutters and anti-optimists aiming to fully annihilate the program, these attacks were full blown by 1968. Following the assassination of President Kennedy in 1963 and Martin Luther King and Robert Kennedy in 1968, amidst the purposeless carnage of the Vietnam War, a full blown pessimistic “limits to growth,” anti-human, “environmentalist” agenda was unleashed.

The final nail in the coffin of the space program came with the August 1971 take-down of the Bretton Woods system. This forced the premature ending of the Apollo program with Apollo 17 in 1972, despite the fact that there were at least three more missions planned and ready to go. The take down of the Bretton Woods system would lead to the triumph of financial monetarism, which pulled the United States into a full blown trajectory of becoming a post-industrial nation, driven by looting and speculation.

The important point here is that it wasn’t just the space program that was sabotaged. America, and the American people, lost our true sense of an optimistic national mission to advance our nation forward, into a more productive economic future. Instead, we chose to become a post-industrial scrap head.

Today, the United States, the creator of the Saturn V, has no heavy-lift rocket at all, and is 100 percent dependent on foreign assistance to get even to low earth orbit. We have lost completely the ability to return human beings to the Moon. The U.S. is now planning to decommission the International Space Station (ISS), among other crucial space science laboratories. The United States is abdicating its leadership in space, and has legally prevented itself from collaborating with China, which is the leading emerging space power in our Solar system. 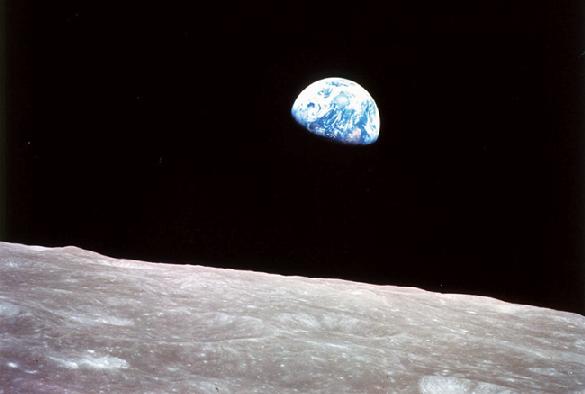 NASA/William Anders
Earthrise. Planet Earth as photographed from lunar orbit aboard the Apollo 8 spacecraft on Dec. 4, 1968.

As we remember the 50th anniversary of our first sight of the far side of the Moon, China is establishing a permanent satellite system there, and landing a roving exploratory robot at the southern part of the Lunar far side, to prepare the way for realizing the goals that JFK laid out back in 1962.

China’s Chang’e-4 mission will again be a first, when it finally reaches its goal of landing on the non-Earth-facing, far side of the lunar surface, after orbiting the Moon for approximately a month. Indications are that the landing could take place around January 3, because that is when the Sun will rise over Von Karman crater, in the area of the South Pole-Aitkin Basin, where Chang’e-4 is scheduled to land.

The Chang’e-4 rover is equipped with an imaging spectrometer for analysis of the lunar soil, and earth-penetrating radar to look into the geological past of the far side of the Moon. The landing mission was made possible by the May 2018 launching of the Queqiao relay satellite, which sits in a halo orbit past the Moon. From this vantage point, it can communicate with both the spacecraft on the Moon and mission control on Earth, which are always out of direct line-of-sight with each other.

Just as President Kennedy set out a science driver program in space exploration to drive human progress forward, linked with a vigorous economic recovery program to transform our national economy and inspire the world, so, too, is China now picking up the torch to lead mankind to new heights of creative scientific and economic breakthroughs that will transform not just one nation, but the whole of mankind. Were he alive today, John F. Kennedy would welcome these initiatives. Kennedy was committed to human progress, and he understood that realizing the full implications of the vision he set forth would not be the effort of one nation alone, but as he expressed, “We go into space because whatever mankind must undertake, free men must fully share.” China has committed itself to that cause of true economic freedom. Are we also still so committed?

Veterans of the space program will tell you that collaboration between America and the Soviet Union, beginning with the Apollo-Soyuz Test Project, was crucial to keeping these nations at peace during the Cold War. The future of human space exploration is a shared mission for all nations of the world. It must never become the realm for British geopolitics. As the Apollo-Soyuz collaboration was critical to peaceful U.S.-Soviet relations, today an American partnership with China—and other nations—in reaching out into our Solar System—is vital to securing a New Paradigm for mankind.

As we remember the 50th anniversary of where we have been—the question is, where are we going? What is our national commitment and vision to get there? A shrunken privatized space program, under a failed monetary system, with no national mission and no international collaboration with China and other nations, won’t cut the mustard! The United States must provide true leadership once again. We must fully consider our role in shaping the future for the next fifty years.