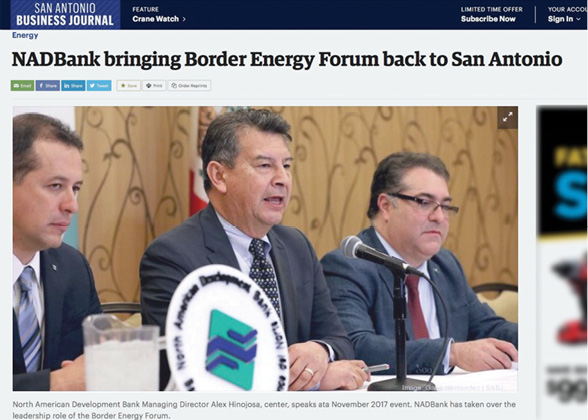 June 15—There are ongoing discussions, in the context of the U.S.-Mexico border crisis, that the existing North American Development Bank (NADB) could be made a vehicle for transformative U.S.-Mexico-Central America infrastructure projects.

Today, the Managing Director of the NADB let it be known that, “in the hallways of D.C. somewhere, a number of folk—both in the Administration, Congress and others—have talked about expanding the Bank to help with Mexico’s southern border. We would probably say, ‘Yeah, let’s do it!’ But that is not our decision.”

The remarks of Managing Director Alex Hinojosa came in response to an intervention by EIR, at a June 6 special seminar in Houston, Texas, “The North American Development Bank and the Next Quarter Century,” co-sponsored by the Mexico Center of Rice University’s Baker Institute for Public Policy and by the North American Development Bank (Banco de Desarrollo de America del Norte).

Thinking outside the box, EIR’s Brian Lantz proposed that, given the tentative agreement reached between López Obrador and Trump on the need to address the underlying causes of the refugee flows and border crisis, and the broader desperate need for large scale infrastructure throughout the region, it would seem to make sense to now upgrade the NADB “by orders of magnitude” into a vehicle to provide cross-border financing, including incorporating the private sector and other investments. Such an approach, Lantz stressed, is required to avoid endemic conflict and confrontation between neighbors.

The room virtually “lit up” after that. The following responses and discussion ensued. NADB Deputy Director Calixto Mateor-Hanel, PhD, responded enthusiastically, and—from the audience—the author of the original NADB proposal for the North American Free Trade Agreement (NAFTA), heartily endorsed the thrust of Lantz’s comments and emphasized the original intent of the Bank to reach far beyond the border area. “This is an important moment in history,” Raul Hinojosa-Ojeda, PhD, exclaimed, “with enormous potential.”

The little-known North American Development Bank was part of the environmental and labor “side agreements” to NAFTA, to secure (Democratic) Congressional votes for passage in 1994. Its purpose is preserving, protecting and enhancing the environment through financing of infrastructure. The Bank is bi-national, not tri-national, being jointly funded by the governments of the U.S. and Mexico, and is overseen by a board composed of top U.S. government officials, including the Secretaries of State and Treasury, and the Administrator of the Environmental Protection Agency, and their Mexican government equivalents. The Bank, being such a cross-border government bank, is uniquely situated to fund the large-scale infrastructure projects that have been mooted by the López-Obrador Government of Mexico and the Trump Presidency in Washington—but only if its mandate and funding are enormously expanded.

Solution to the Refugee Crisis

The NADB now has more importance, given the U.S.-Mexico agreement reached over the June 8-9 weekend, to curb the flow of refugees crossing the Mexico-U.S. border into the United States. Speaking June 14 at Mexican President López Obrador’s daily press conference, Foreign Minister Marcelot Ebrard gave an upbeat briefing on the progress his government was making in implementing the terms of the prior week’s agreement with the Trump administration, including deploying 6,000 National Guardsmen to the Mexican-Guatemalan border in order to prevent undocumented persons from crossing into Mexico. But the most important progress in those talks, is moving toward the implementation phase of the regional development program for southern Mexico and northern Central America, which Mexico announced May 20.

Ebrard reported that a working group is already in place, with representatives from El Salvador, Guatemala and Honduras, as well as many state agencies, to get the regional program going. Ebrard stressed that money to finance this plan is a key issue. Potential commitments from the United States to provide $5.8 billion for Central American development projects and $2 billion more for southern Mexico have, however, not been confirmed, Ebrard reported.

Meeting this immediate financial commitment, plus providing much more, begs the existence of a financial infrastructure and corresponding masses of national credit for new, high energy-density and high-technology economic projects, in order to solve the crisis encompassing one of the largest regional migratory flows in the world, from Central America up to and across the U.S.-Mexico border.

The collapse of U.S. national infrastructure, also the subject of informal discussion during the Rice University event, requires a “outside the box” approach: Such an approach is found in Lyndon LaRouche’s “Four New Laws to Save the U.S.A. Now!” that LaRouche deemed “an immediate necessity” back in 2014. Great projects await a new credit system to carry them out.

The NADB and Politics

The NADB is now asking the U.S. Congress for its first increase in capitalization, as it is integrated with the new U.S.-Mexico-Canada Agreement (USMCA), which is replacing NAFTA. A number of limitations in the Bank’s current mandate must be removed if the Bank is to be really useful. There is the matter of the Bank’s current, limited geographical mandate, which covers only a narrow band along both sides of the U.S.-Mexico border, 300 kilometers into Mexico and 100 km into the United States. Further, there are limits on the sectors to which the Bank’s loans can be made. The Bank finances small water, energy (wind and solar), and waste management infrastructure. Its current maximum lending capital is only $540 million in paid-in capital, which it maximizes by leveraging that capital, bringing in additional agencies, banks and private capital. The thinking now has to be much bigger.

The author of the actual Bank legislation later came up to introduce himself to EIR’s Brian Lantz. In conversation, he told Lantz that, indeed, the Reconstruction Finance Corporation (RFC) of the Franklin Delano Roosevelt era had been a model looked to in originally formulating the NADB proposal as a design that could be scaled up, as Roosevelt expanded the RFC. For example, the Bank is finalizing an agreement with Mexican pension funds to invest through a new “vehicle.” The NADB already allows for 25-year payback on its loans, which is critical for large infrastructure projects.

Finally, there is the needed flexibility in decision making. The managers of the Bank pointed out that they have very little discretionary decision-making power. Every loan has to be approved by the board composed of top U.S. and Mexican cabinet officials—both the loan and whether the loan meets the Bank’s environmental criteria.

After two sessions and a lunch, seminar attendees were presented with much less substantial comments by Congressman Anthony Cuellar (D-Texas), in a short “armchair” discussion with Antonio Garza, former U.S. Ambassador to Mexico. Rep. Cuellar made a point of saying he always supported the “NADB,” but punted on supporting a big expansion of its mandate. Cuellar added that House Financial Services Committee Chair, Maxine Waters (D-Calif.), will now move the current NADB bill, a bill that will increase capitalization by some amount and align it with the new USMCA. But that bill, which Congresswoman Waters plans to move forward, is not a proposal that includes the required magnitude of development so excitedly discussed at the Rice seminar.

Officials of the Bank pointedly informed this author that they cannot lobby the Congress, but they can, and will, circulate their information, “so you can lobby the Congress.” There is plenty of work to go round, but no one can argue that the means do not exist.