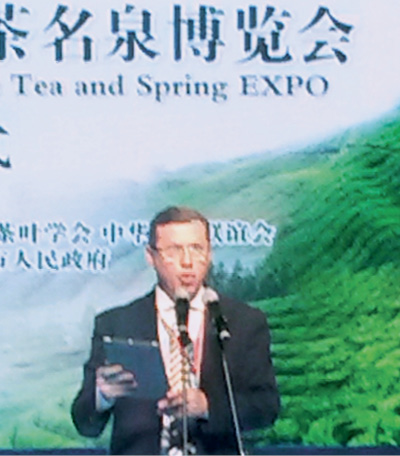 June 15—As part of China’s opening to the world and in the framework of its Belt and Road Initiative, one of China’s most famous and ancient tea-producing regions organized the first Jiujiang International Famous Tea and Spring Expo 2019, held in Jiujiang, in Jiangxi province, May 29-31, celebrating the world of tea and the importance of water, two elements of pride for the city and for China. Senator Raffaele Fantetti, Secretary of the Italian Senate Budget Committee, was invited to head the international delegation, a testimony to the newly forged Italy-China partnership for the Belt and Road Initiative.

Sen. Fantetti emphasized the leading role of Italy in his speech to the opening session of the event, saying:

The last time I was here in China, about a month ago, I took part in the very successful Second Belt and Road Forum in Beijing attended by Italian Prime Minister Giuseppe Conte and I was pleased to observe that Italy was the first and only G7 country to sign onto the “One Belt, One Road” initiative. We sincerely believe this to be a program of mutual benefit to foster deeper cooperation along better connected East-West corridors.

Italy and China have shared a long tradition in such matters, going back to the time of Marco Polo and Matteo Ricci. 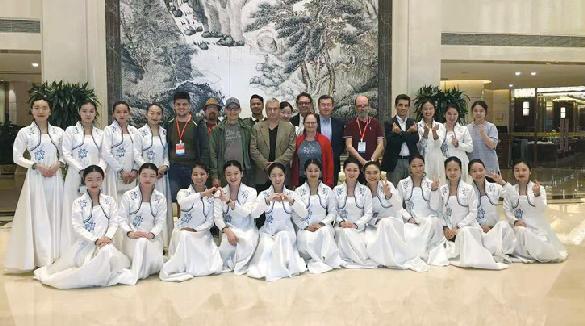 Foreign delegation with the conference staff.

Just as President Xi said during his visit to Rome in March, China and Italy are both great examples of Eastern and Western civilizations: both have made solid contributions to the development of mankind and have played crucial roles in linking the Eurasian continent. Since the establishment of bilateral ties in 1970, China and Italy have intensified their relations in all fields. This became even more important in 2004, when a comprehensive strategic partnership was established, paving the way for intensified cooperation. Last year Task Force China was launched within the Italian Ministry for Economic Development, with the aim of elaborating a systemic and comprehensive approach for bilateral cooperation. The bilateral trade between the two countries reached almost $50 billion in 2017 and has been increasing since then.

Fantetti’s presentation followed that of Xie Xiping, the mayor of Jiujiang, who welcomed the 700 guests. The next speakers were the International Tea Federation president, Jan Gibbs and the President of the China International Tea Culture Institute, Hou Guofu. 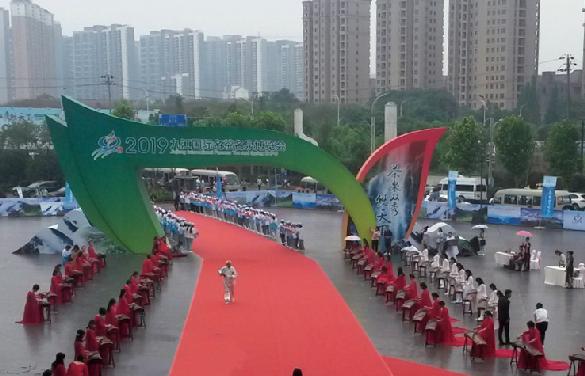 EIRNS/Claudio Celani
Looking out from the entrance to the Jiujiang International Famous Tea and Spring Expo 2019.

After the speeches there was a stunningly beautiful opening ceremony with music, dance and poetry, with four choirs, one with children. All the singers had well-trained voices, what we call an “operatic choir.” Experts know that it is generally difficult to find enough voices to build just one such choir, and therefore can appreciate what an effort was made in building four!

The opening ceremony was preceded by a light show on the evening of May 29, followed by an experts’ forum in the Peach Garden on Mount Lu (Mount Lushan), a UNESCO World Heritage site, on the afternoon of May 30.

For the Chinese, tea is a cultural experience, similar in some respects to the wine culture in the West. As with wine, tea is not just a beverage, but a cultural, social and aesthetic experience. As with wine, tea taste must be developed in order to appreciate the complexity of its flavors, due to varied cultivation regions and production methods.

We were introduced to Chinese tea culture during innumerable tastings at and around the Expo, helped by the advice of experts in our delegation. We were introduced to and grew to appreciate many of the most famous of Jiujiang teas. On the last day of our stay, we visited a tea plantation and tasted Lushan Cloud Misty Tea, named for the mists that cover the mountain’s verdant slopes.

Mount Lu, which means “a lot of water” in Chinese, has cloud cover for an average of 200 days a year. This provides tea plants a unique constant humidity. The mountain also has three of the most famous springs in China. It has a rich history and has been the preferred summer residence, hermitage, and place of exile of artists, as well as religious and political figures. One famous person celebrated on Mount Lu is the poet Bai Juyi, whose poem “Peach Blossom in Dalin Temple” is engraved in stone. Mount Lu has a modern cable car to serve the growing tourist traffic.

Situated on the southern shore of the Yangtse River, Jiujiang is surrounded by natural and artificial freshwater lakes. The city is not as large as Shanghai or Beijing, but the metropolitan area has 4.8 million inhabitants, large by European standards. It has grown from being a purely agricultural region into a vibrant agro-industrial center and tourist attraction. Beyond agriculture and tourism, Jiujiang features a logistics industry and five main manufacturing sectors: electronics, new non-metallic materials, energy-saving electric appliances, food processing, and energy. Traditional industries are petroleum, chemical, steel, and light textile.

The International Famous Tea and Spring Expo was co-hosted by the Jiujiang Municipal People’s Government, the China International Tea Culture Institute, the China Forestry Group, and the China Tea Science Society, and was co-organized by GBTimes.