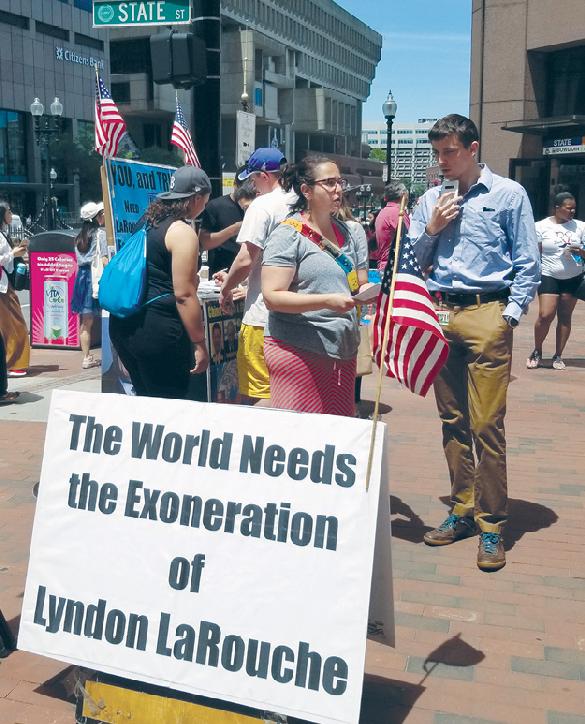 June 23—Amid a clearly growing danger of another Southwest Asia war or even global war, Lyndon LaRouche’s movement on June 21 released two videos whose mass circulation is aimed at striking down the war party in an admittedly difficult, but yet the only potent, and clear path available to American citizens: exonerating Lyndon LaRouche.

An embattled President Trump is clearly blocking the start of wars pushed by British intelligence and the war party in his own administration and the Congress (see Barbara Boyd’s article, “From Cyberwar to Nuclear War?” in this issue). And he is the person in a position to reopen the case of the gross misconduct in the 1980s prosecutions of LaRouche, who became the British war party’s strongest adversary during his 70 years’ political life. In the struggle over war or peaceful negotiation, nothing would tip the balance in President Trump’s favor as forcefully as initiating the exoneration of Lyndon LaRouche.

Thus on June 21, the Schiller Institute and the LaRouche Political Action Committee (LaRouche PAC) began a mass release—including to Members of Congress and to diplomats at the United Nations—of a video record of the 1995 hearings on Justice Department misconduct in prosecuting Lyndon LaRouche, and a video on his life as commemorated in New York City by the Schiller Institute on June 8, with a petition for his exoneration. The hearings were held by a commission headed by the late Congressman James Mann of South Carolina and including civil rights veterans such as Attorney J.L. Chestnut of Alabama. It heard former U.S. Attorney General Ramsey Clark call the prosecutorial misconduct and combined government and media assault to persecute LaRouche, the worst he had seen or learned of in his long legal career. Because the prosecutions of LaRouche were begun in Boston in 1984 under then United States Attorney Robert Mueller—lately special prosecutor against Trump—that video is entitled, “The LaRouche Case: Robert Mueller’s First Hit Job.”

The links to these videos that would go live at 9:00 a.m. June 21, had been sent to tens of thousands of people who were contacts of the organizations and their individual leaders. Many of these quickly passed them on to their own e-mail contact lists or put them on social media groups. Leaflets were circulated that morning in several large metropolitan areas including New York City, Washington, D.C., Houston, Boston, Detroit, Chicago, Baltimore, and West Coast cities from Los Angeles to Seattle. Leaflets were delivered to Trump Tower in New York by a LaRouche PAC supporter. Urging a meeting of activists in New York on June 22 to keep expanding the distribution, LaRouche PAC leader Diane Sare warned, “We really face a very grave danger” of war.

By the end of the weekend, 7,000 people across the United States had watched the exoneration video. One radio interview on X22 Report radio with Harley Schlanger, Lyndon LaRouche’s former national spokesman, generated 33,000 hits within 24 hours; another podcast by Virginia organizer Tim Rush generated 1,000 hits, and the first re-postings were seen on websites internationally. Large numbers of activists spoke up on radio programs and Internet broadcasts, reaching various political and social groupings, with the message: LaRouche must be exonerated to shock the war party and free the hands of President Trump.

In the situation of effective “dual power” between Trump and the British-inspired war party, one e-mailed response typifies large numbers of others: “Very interesting, and very similar to what is happening today to President Trump; leopards never change their spots, history repeating itself. Thanks.” The every-increasing mobilization has the power to change that sordid historical pattern and change history.

Another common response: “Whatever Lyndon LaRouche did or said scared the ‘powers that be’ to death.”

Strikingly, in Italy just two organizers in Milan reached 7,000 people with links to the videos, and a large number were Senators, Deputies, or regional elected officials, as well as artists, musicians and other cultural leaders. LaRouche’s life’s work and policies are widely known in Italy, where he has spoken to Senate Committees and to many other events with leading figures. Its current government is also enjoying good and active relationships with the Trump Administration.

In the United States, this is the first political mobilization in which the LaRouche Political Action Committee (LaRouche PAC) and Schiller Institute are effectively using social media in a planned and measured way to get a synchronized mass effect where the postings of large numbers of LaRouche activists are coordinated. This is fortunate, because it is the most critical of mobilizations for the movement and for the country and its presidency. LaRouche PAC’s Facebook page, for example, reached thousands more Americans, and individual LaRouche activists around the country posted the video links to scores of additional social media groups involving hundreds of thousands of individuals.

At the same time, LaRouche movement organizers found a heightened response when selling literature and raising money at street tables around the country. On the June 21 kickoff day, four activists in Michigan raised more than $1,200 to expand this mobilization by telling Michiganders that Robert Mueller and the British first went after Lyndon LaRouche, and now President Trump, and that is why LaRouche’s movement could immediately expose “Russiagate” for the foreign conspiracy it was. LaRouche, they said, had led the fight for 50 years against what the President calls the globalists, but LaRouche knew it was the British Empire.

Following the opening drives, Schiller Institute President Helga Zepp-LaRouche asked for an acceleration of the mobilization and particular focus on winning leading figures in the United States to the exoneration call, as well as conducting interviews for publication with those such figures who had already signed the exoneration petition. As an example of what she meant, in the Rhode Island State House of Delegates, which had adopted a resolution honoring Lyndon LaRouche’s accomplishment upon his death, a single legislator began an e-mailing of the video links to “2,000 contacts.” State representatives and state senators in five of the six New England states had the video e-mails by Monday, June 24.

“It may not be obvious for many people,” Zepp-LaRouche had said, “but if Lyndon LaRouche is not exonerated, I do not think that we can stop the present drumbeat to World War III. Because his exoneration, and neutralizing the war machine which is driving the world towards World War III, that’s one and the same thing. Because it was that apparatus that prosecuted my husband, despite the fact that he was completely innocent of all accusations, which is exactly the war party driving the world to the verge of extinction.”

In this very dangerous situation, she noted, “The world is looking to us to have some courage.”