This article appears in the July 5, 2019 issue of Executive Intelligence Review.

LaRouche’s Ideas Presented to Conferences in Ivory Coast and Angola

June 30—French Schiller Institute representative and Africa development expert, Sébastien Périmony, was invited to present the economic and scientific ideas of Lyndon LaRouche, focusing on the urgently required education of the next generation of scientists, to two conferences in Africa. The first was, “The New Silk Roads, African Opportunities, Focus on Ivory Coast” in Ivory Coast on June 15, and the second was at the June 18-20 ANGOTIC 2019 in Angola.

Périmony’s detailed report on both conferences is available on the Schiller Institute website.

We focus here on the development and application of human creativity as the driving force of the future, and the significance of those two different African conferences in both reflecting and advancing mankind’s innate ability to create the capability for durable peace now, and for the next 50 years—with the perspective of mankind as a galactic, rather than an earthbound species. Africa, if viewed from this perspective, is an enormous and necessary contributor to that process with a population now of almost 1.3 billion people.

Périmony’s audience in Ivory Coast was composed of 400 students, aged 20-25, drawn primarily from the Félix Houphouët-Boigny National Polytechnic Institute in Yamoussoukro, but also students from universities from across the country, as well as local government officials. The Polytechnic Institute—modeled on the French École Polytechnique education system of Lazare Carnot and Gaspard Monge—with a student body of 4,000, studying science and technology and a curriculum that includes mechanical engineering and hydraulics, is unique in French-speaking Africa. That French polytechnique approach of Monge and Carnot was also the basis for the best of the science, and engineering education at America’s first military academy, West Point, in the era of the American Revolution.

Most Americans are probably ignorant of what West Point highlights on its website:

Aware of our young nation’s need for engineers, Superintendent Sylvanus Thayer made civil engineering the foundation of the curriculum. For the first half century, U.S. Military Academy graduates were largely responsible for the construction of the bulk of the nation’s initial railway lines, bridges, harbors and roads.

Recent West Point graduates like U.S. Secretary of State Pompeo would do well to heed that tradition, rather than the anti-American claptrap hawked by the likes of Zbigniew Brzezinski’s partner-in-crime, Samuel Huntington in his 1957 book, The Soldier and the State.

The Ivory Coast conference, “The New Silk Roads, African Opportunities, Focus on Ivory Coast,” was organized by the Félix Houphouët-Boigny Foundation for Peace Research, the nation’s leading foundation, and the Association for the Preservation and Promotions of the Ideas of El Hadj Boubacar Gamby Sakho (ASPP-BGS) in partnership with the city’s Confucius Institute.

Lyndon LaRouche’s unique focus on the necessary increase of scientific and artistic creativity, per capita, on the entire land area of the Earth, and among all nations and peoples, provided the platform for discussion with this important group of educators and thinkers.

The Belt and Road Initiative (BRI)—the New Silk Roads—is the largest set of infrastructure projects in the history of mankind, and requires a highly educated, scientifically oriented workforce on every continent. Périmony was invited to present LaRouche’s unique economic contributions to the science of economics, including: the need for an ever-increasing energy flux density in production processes; the metric of potential relative population density, based on natural geography and resources as enhanced by man-made improvements at an ever-higher technological level; the use of sovereign currency and credit as implemented first in the Massachusetts Bay Colony, then by Alexander Hamilton and later Abraham Lincoln; the requirement of ever-increasing creativity per capita to increase the productive powers of labor; and why Africa, like China, can leap-frog into the future.

The invitation to Périmony was extended by Mr. Fofana Boubakar, President of the ASPP-BGS Association, co-sponsor of the conference and nephew of the Association’s namesake, Patriarch El Hadj Boubakar Gamby Sakho, who has worked to bring people, cultures and civilizations closer together, especially through education. The impetus for the conference itself was the presentation in Paris, by Schiller Institute founder Helga Zepp-LaRouche, in November 2018 of the French language edition of the Schiller Institute’s 422-page report, The New Silk Road Becomes the World Land-Bridge: A Shared Future for Humanity, Vol. II. 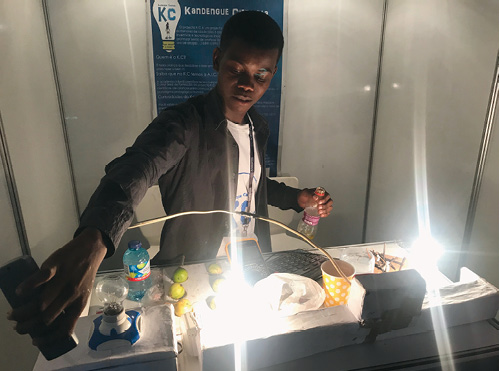 Schiller Institute
A student demonstrates a science project, one of the many exhibits on space policy at the ANGOTIC 2019 expo in Luanda, Angola.

Lyndon LaRouche’s ideas were presented in a very different type of venue in Angola. The Angola ICT Forum 2019 (ANGOTIC 2019), featured information and communication technologies (ICT) exhibitors from various government agencies and industrial and telecommunications exhibitors from all over the world. There were more than 8,000 participants and 150 speakers over three days. Périmony was invited to address a breakout session titled, “Education for the Digital Age,” sharing a panel with the Secretary of State for Technical Education (who stood in for the Minister of Education), two corporate representatives and a professor of law from the Agostinho Neto University.

Périmony opened his talk with Zepp-LaRouche’s remarks this past May:

I think we are probably the generation on whom later generations will look back to, and say, “Oh! This was really a fascinating time, because it was a change from an epoch to another one.” And I have an image of that, which is, this change that we are experiencing right now, is probably going to be bigger than the change in Europe between the Middle Ages and modern times. Now, I think we are before, or in the middle of such an epochal change, where the next era of mankind will be much, much more creative than the present one, and that’s something to look forward to, because we can actually shape it, and we can bring our own creative input into it. And there are not many periods in history when that is the case: So we are actually lucky.

The perspective of the Schiller Institute’s World Land-Bridge idea, and its unfolding in the new paradigm initiated by China’s President Xi Jinping in 2013, provide a platform for cooperation with Africa. The future of the African continent requires the elimination of poverty everywhere through industrial and scientific development. Périmony underscored this vision:

With a top-down approach, the deficit of basic infrastructure in Africa, as it was in China, is an advantage, in that it allows nations to skip the intermediate stages of development that occurred over centuries in the industrialized countries, to leapfrog directly into the technologies that are at the frontier. This is the approach that has been taken by China, deploying high-speed rail and magnetically levitated trains, and fourth-generation nuclear fission technology. Similarly, China’s space program is not simply repeating what other nations have done, but is carrying out challenging missions that have never been attempted before.

This approach to development will require a revolution in education dedicated to fostering a learning culture in which Africa’s children will seriously concern themselves and apply their talents to the major infrastructure, science and technology challenges, and the growing number of projects on the horizon. 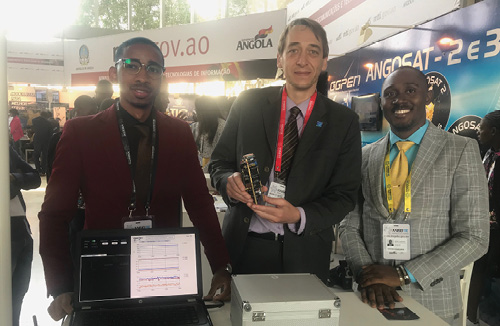 The seeds of that revolution were evident on the second day of ANGOTIC 2019 when 700 people gathered to watch the first successful launch in Angola from the Cabo Ledo military base in Angola on June 19, 2019, of student-designed space-monitoring instruments in small containers (CanSats), similar to sounding rocket payloads. The operation was carried out with the assistance of the National Air Force (FAN).

The science program to create, launch and test these mock mini-satellites was sponsored by the Angolan National Space Program Management Office (GGPEN), the Ministry of Telecommunications and Information Technology (MTTI), and the Department of Space Science and Applied Research (DCEPA). One hundred twenty-six students were selected to participate from 26 Angolan colleges and universities from across the country.

CanSat competitions, begun in 1999 in the United States, for just such educational development purposes, are now run by the European Space Agency (ESA), the U.S. Naval Research Laboratory, as well as other national groups and governments, and are a fascinating and critical element of taking the New Silk Road out into the Galaxy, which will require massive increases in energy-flux density, infrastructure, and the elimination of the disease of poverty on Earth.

ESA describes a CanSat as—

a simulation of a real satellite, integrated within the volume and shape of a soft drink can. The challenge for the students is to fit all the major subsystems found in a satellite, such as power, sensors and a communication system, into this minimal volume. The CanSat is then launched to an altitude of a few hundred meters by a rocket or dropped from a platform or captive balloon and its mission begins: to carry out a scientific experiment and achieve a safe landing.

African participation, to this author’s knowledge, had until now been limited to South Africa and Egypt—Egypt only having created a space agency in 2107.

The CanSat program is an important step for Angola in creating a growing cadre of scientists and engineers skilled in space exploration, satellite mission design, assembly methods, testing, launch, data collection and analysis.

Périmony reported from Luanda that ANGOTIC 2019 conference participants were able to follow live on a giant screen, the release of the CanSats from a helicopter aloft at 500 meters, and waited with tense anticipation for the scientific monitoring results to be captured by the students who had built experimental payloads. Emotions peaked when the first transmitted results began to arrive on the students’ computers. Explosions of joy, and seemingly endless applause celebrated this historic moment in Angola.

The excitement was palpable at the various exhibits dedicated to Angolan space policy. A CanSat mini-satellite was on display in the exhibit about Angola’s new communications satellites, the AngoSat program, operated by its Ministry of Telecommunications and Information Technology and the GGPEN.

The majority of those present were young people, and all of them are convinced that the future of their country will not proceed without the policy of developing space technologies.