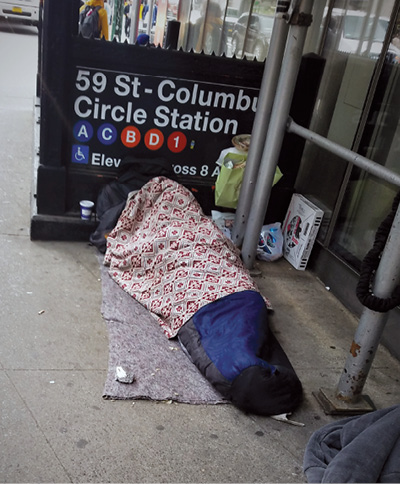 EIRNS/Diane Sare
One-third of homeless families in shelters have at least one employed family member, but still cannot afford to pay rent.

April 28—In October 2014, during the dark days of the Obama Administration, Lyndon LaRouche created what he called his Manhattan Project, whose purpose, as expressed by one of LaRouche’s colleagues, was “expressly to resurrect the principle of Alexander Hamilton’s New York and United States—to create and empower the most productive, literate, and skilled free citizenry in the world, exerting and improving the productive powers of its labor, impeded not by ethnic background, skin color or lack of title, but only by the limitations of human creativity—which has no limitations.”

New York City, by far the largest city in the United States, was the seat of the Government of the United States of America in 1789 when George Washington was sworn in as the first president. It was home to Alexander Hamilton, Washington’s adjutant, framer of the Constitution, and later Treasury Secretary, who drafted a series of papers and policies crucial to the economic success of the young Republic.

New York became a major center of finance and trade, as it also became the first stop of millions of immigrants coming to make their homes in America after arriving at Ellis Island. Today New York is known for the New York Stock Exchange, the Metropolitan Museum of Art, the New York Philharmonic, and the United Nations, to name a few of the many institutions that are based here. New York is also the city of origin of the International Caucus of Labor Committees—Lyndon LaRouche’s international association, which he founded over 50 years ago, to address what he correctly foresaw was an impending physical economic collapse of the United States and world economies.

Manhattan, the most densely populated of the boroughs comprising New York City, is, along with the rest of the city, experiencing a catastrophic collapse in every imaginable domain: physical, cultural, and moral. This collapse can be reversed by implementing LaRouche’s Four Laws as part of a New Bretton Woods system, and one could argue that with President Trump in the White House and the Chinese leading the world to eradicate poverty by 2050, this reversal is perhaps even likely. But it will not happen if Americans, and in this case New Yorkers, sit smugly on the sidelines, as they themselves are sucked into the maelstrom of a deadly toxic sewer of delusion.

The purpose of this report is to hold up a mirror, so that we can look ourselves straight in the eye and consider how it is that we have allowed ourselves to fall into this sorry state of decay, which many call “success,” in order that we might change our thinking, and thereby our behavior, so that we can not only survive, but prosper for centuries to come, on Earth and on other planets as well.

Today the blood-sucking monster known as “Wall Street” and its City of London controllers have turned the formerly great city into a filthy rubble heap with a few fancy skyscrapers whose rents only the ultra-rich can afford. The average speed an automobile can travel in Manhattan is below 5 miles per hour. The subway trains went from a 99% on-time rate in 2007 to 78% today. (And that’s an improvement from 65% last summer!) In some parts of Brooklyn it is reported that rats are so numerous they are destroying people’s cars by gnawing through electrical wires. Bridges which have double-digit dollar tolls connect roadways with potholes than can swallow your tires. Foreigners visiting Manhattan actually giggle and look away when you talk about the infrastructure of the city.

To address all of the facets of the collapse of New York would be a project of mammoth proportions. A comprehensive plan of action will require a documentation of the painful magnitude of the collapse in numerous overlapping areas: transportation, water management, power supply, education, housing, and healthcare among them. But for the purposes of this short report, I have chosen to focus on homelessness among public school students in New York City, because if this particular crisis is not solved immediately, its effects will be with us for generations to come.

In October 2018, the New York Times ran an article entitled “Homelessness in New York Public Schools is at a Record High: 114,659 Students.” The article caught my eye, and I imagined what it must be like in a classroom where one out of ten students is homeless. Of course, it doesn’t work that way—the homeless children are not evenly distributed among the five boroughs’ 1700 public schools. It turns out that in 144 of these schools 30% of the children are homeless, and in a few schools in the Bronx and Brooklyn roughly half of the children are homeless. Try to imagine teaching a class of 27 students, where 12 of them haven’t had a bath in two weeks, and 15 haven’t had breakfast that morning, or dinner the night before.

Another study by Kathryn Hill and Zitsi Mirakhur of NYU’s Research Alliance for New York City Schools found that of “81,669 students who began kindergarten in the fall of 2012, 10,312 students—over 12 percent of the cohort—experienced homelessness at some point before their 5th grade year.” Of those who became homeless during that period, 70% were homeless for over one year, and 25% were homeless for all five years. Of these homeless children, about 58% were staying in the home of a friend or family member, and most of the rest were in shelters. Not surprisingly, fewer than 20% of the children staying in shelters were able to pass standard tests for reading or mathematics, due to inability to concentrate, and also the necessity to frequently move, resulting in missing an average of 30 days of school per year.

On top of this, there are 400,000 low-income New Yorkers, many of them children, living in 328 so-called “developments” run by the New York City Housing Authority (NYCHA), who are suffering sub-human living conditions, finally brought to light as a result of a 2018 lawsuit brought by Geoffrey Berman, the U.S. Attorney for the Southern District of New York. The agreement with NYCHA, signed by Berman, Housing and Urban Development (HUD) Secretary Ben Carson, and Environmental Protection Agency (EPA) Acting Administrator Andrew Wheeler, states that NYCHA is required

. . . under the supervision of a federal monitor, to fundamentally reform its operations and remedy living conditions for its residents, including lead paint hazards, mold growth, pest infestations, lack of heat, and inadequate elevator service.

In the very cold and snowy winter of 2017–2018, an astonishing 320,000 of these 400,000 residents had lacked heat or hot water for extended periods of time. NYCHA also was discovered to have been covering up findings of dangerous levels of lead in the water, which affected an unknown number of children. In June 2018, the New York Times reported that there were over 170,000 unanswered repair tickets for apartments in these complexes, and that many tickets were closed without the repairs ever having been done.

As a result of this breakdown, and because there is only 1 social worker per 1,660 homeless children, teachers and school administrators are finding themselves dealing with all kinds of situations for which they were never trained and are not prepared. School supply closets now carry items such as deodorant and toothbrushes for homeless students. In 2017, it was decided to provide free lunches for all students because those whose parents couldn’t afford to pay, were often stigmatized, and therefore ashamed to ask about the discounted lunch programs which were available.

Aside from the immediate difficulties for all students in a classroom where 30–50% of the students cannot concentrate because all their energy and concentration are consumed by survival issues, consider the situation a decade from now when hundreds of thousands of young people are growing into adults, unable to read and write, or perform basic mathematical calculations. What will become of these people? What will become of a city and a nation which is filled with young adults who are at an educational and perhaps emotional level of a four-year-old, through no fault of their own? Do you really think that such a society will survive? Which of these young people, given the proper conditions of life, might have found a cure for cancer, or become the next Mozart? Can you place a monetary value on this colossal loss of undeveloped talent?

This problem is not caused by a shortage of money. Through New York City flow enormous amounts of money, but none of this money seems to find its way into improving the physical conditions of the city. These income streams are sucked into propping up the stock market bubble, which is rapidly approaching the breaking point. What’s the difference between $50 spent to park in a lot for an hour, and $50 to pay for school lunch for a child for 28 days? A New York resident getting paid minimum wage would have to work for more than three hours, to pay for one hour of parking! One hour of minimum wage work barely covers the cost of crossing the George Washington Bridge (which is crossed by 276,000 vehicles per day).

Because of unbridled real estate and housing speculation, housing costs have soared beyond the reach of many working people. In 2017, it was reported that one-third of homeless families in New York shelters had at least one employed family member, but one salary was not enough to cover rent or a mortgage.

The lying Mayor of New York, Bill de Blasio, who defended NYCHA’s horrendous record as “doing the best they can,” until the fraud was exposed in the 2018 lawsuit mentioned above, has proposed “congestion pricing” and banning plastic bags and consumption of beef to deal with “climate change,” but has no meaningful proposal to alleviate the murderous poverty suffered by the people he supposedly represents.

It is this delusional quality of non-leadership which is accepted by our citizens which has to change, or we are not going to survive as a nation. People like Bill DeBlasio and AOC (Rep. Alexandria Ocasio-Cortez) should be ridiculed and laughed out of office. The problem is that most of your neighbors have come to accept these conditions as a “new normal,” as opposed to intolerable, and requiring drastic action.