Devastation in the Farm Belt,Rural Depopulation 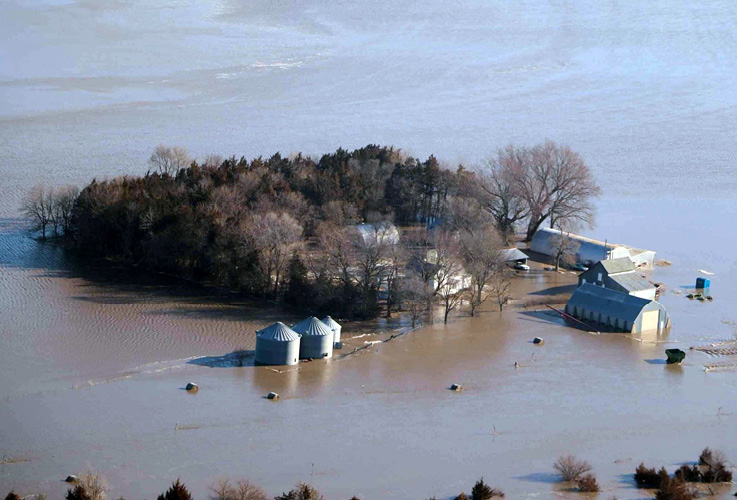 gillettewy.gov
Flood waters cover a farm in Nebraska. The 2019 flooding has not only caused devastating losses of livestock and stored grains, but has also made timely spring planting of many crops impossible.

June 17—Drive through the Midwest Farm Belt as of spring 2019, and you immediately see the effects of not building needed infrastructure. Two things stand out:

First, the vast flooding. The lack of full build-out of the water control structures (dams, levees, diversion lakes and channels) long planned for the Upper Missouri-Mississippi River Basin over the past 50 years, has made this huge agriculture region of 15 farm states subject to periodic storm disasters, as well as limiting potential irrigation, extended navigation and hydropower. Plus, the existing river navigation system serving this mid-continental breadbasket region has been closed repeatedly during the past three months, due to high water dangers. This year’s storm patterns also produced fierce tornadoes.

The sorriest part of the picture is that this heartland of the U.S. Farm Belt—one of the world’s top agriculture zones—has been repeatedly subject to massive floods: in 2011, 1993, and earlier. The devastation is huge. So far, an estimated 40 lives have been lost due to the 2019 flooding, storms, and tornadoes. One Nebraska farmer died when high water swept him off his tractor, as he tried to rescue a motorist—a stranger in trouble.

This level of destruction was not at all “necessary,” given that since the 1940s, engineering plans were worked out for both the Upper Missouri and Upper Mississippi systems, similar to the big dams, run-off channels, flood walls and other systems that were built in the Lower Mississippi after the devastating 1927 floods.

A Blow to the World’s Food Supply

The flooding and stormy weather in Missouri–Mississippi River Basins is automatically a blow to the world food supply. The U.S. accounts for over a third of all world corn output, and a quarter of world soybeans—whose 2019 harvests will be greatly reduced by late seeding or re-planting, if they are not total losses. 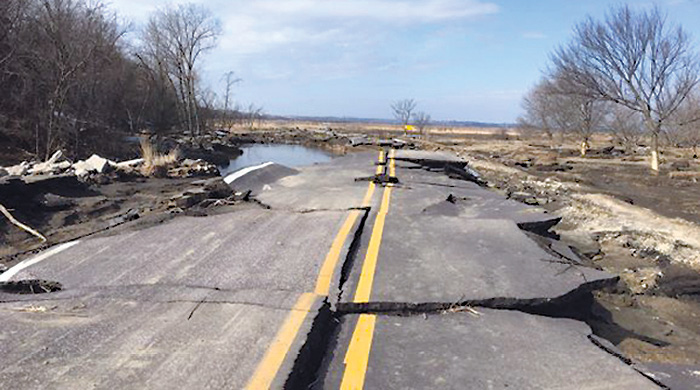 Nebraska State Patrol
Right: Destruction of a portion of Highway 12 due to flooding.

According to USDA estimates, as of June 14, only 83% of U.S. corn was planted nationally, compared to the five-year average of 99% for this time of year. For soybeans, only 60% were in the ground, far below the normal 88%. Much of what is planted, is slow to emerge.

Livestock is a similar picture. The core Missouri Basin states hit by flooding—South Dakota, Nebraska, Iowa, Missouri, and Kansas—account for 27% of U.S. cattle. Over half of U.S. hogs are raised in this region. Four of the top ten egg producing states are here: Iowa, Minnesota, Nebraska, and Missouri. All this capacity is hit by lack of infrastructure, either directly or indirectly.

Second, the underlying economic landscape in the Plains and nearby states—with or without flooding, is a dramatic scene of abandoned farmsteads and boarded up rural towns. This reflects the impact on the agriculture sector of the last four decades of phase-out of national-interest economic policies such as parity-based pricing for farm commodities, regulation to prevent wild commodity speculation, infrastructure-building to provide power, modern transportation, water management and disaster defense. Instead, more and more practices of the British free trade model have been implemented, serving Wall Street and City of London interests. These include wild price swings, speculation, and lack of anti-trust action. In particular, a select few mega food cartel firms have come to exert vast control of processing, retail and international trade, and farm inputs (such as chemicals, fertilizers, and seeds). They source commodities for cheap, and make their cut, no matter what happens with trade. 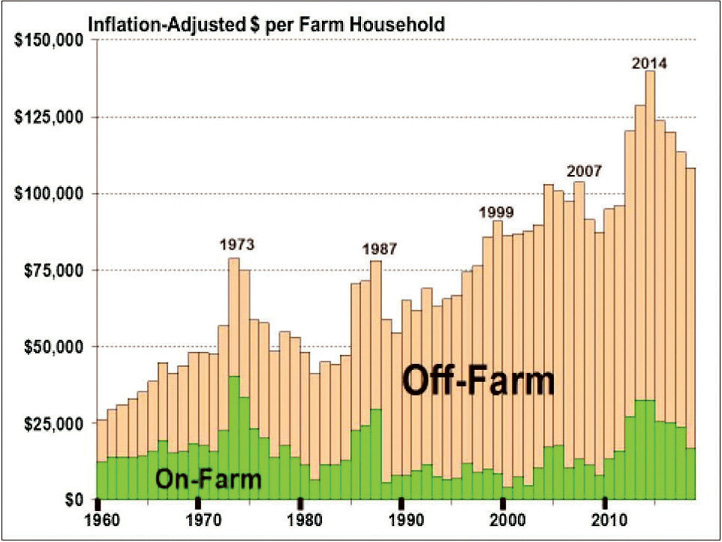 USDA, ERS (Economic Research Service), August, 2018
The average farm household income comes mostly from the off-farm jobs of family members, and has declined in total, for the past five years. The figures are inflation-adjusted, with 2017=100.

The independent family farm model of the American System has been severely undercut. Average farm income in the past few years has been below costs of production, and even income from off-farm jobs has not been enough to make up the gap. More than half of U.S. farm households lost money farming in recent years, according to the USDA, which estimated the media farm family income was negative $1,548 in 2018. For most to be able to continue to farm, the high value of land has provided the collateral for banks to keep lending.

Total aggregate farm income for 2018 was half that of 2013. The pressure is to go bigger and bigger, to try to get margins of income, which are becoming smaller and smaller. Go-getter farmers are renting thousands of acres to try to make it. But this is no answer for the nation. If land prices blow out, a very large portion of the big operators will go out of business. Moreover, there are not enough up-and-coming young farmers to take over.

The number of farm bankruptcy declarations is surging in the Midwest. The declarations of Chapter 12 bankruptcy (the federal legal code for independent farm household bankruptcies) jumped 100 percent over the decade 2008–2018 in Illinois, Indiana and Wisconsin. In Minnesota, more Chapter 12 bankruptcies were declared in 2018 than in the previous 10 years combined. Short of bankruptcy, thousands of farmers are turning to professional mediators to arrange a work-out of their debt. In Minnesota, more than 3,500 farmers filed for mediation in 2018 to try to save their farms.

The data in the latest U.S. Census of Agriculture, released this April (covering 2012–2017) reflects the downshift underway in the U.S. farm sector, in which mid-sized, family-scale operations are disappearing. What is being lost, is the productive context of know-how from family farm activity—animal husbandry, handling heavy equipment, crop and livestock genetics, chemicals, construction, water management, understanding weather patterns, mechanics, machining, and electrical and plumbing skills, etc.—all carried out in an industrious community, which is conducive to raising up young folk with know-how, ingenuity, and optimism. The downwards trend reflects the establishment of an increasing number of larger farms (towards the mega-sized) and smaller farms (serving niche markets and “lifestyle” purposes), and a loss of mid-sized family farms. Merely 78,865 mega farms (3.6% of all farms) produce over two-thirds of all the $390 billion in total value of annual U.S. farm production. 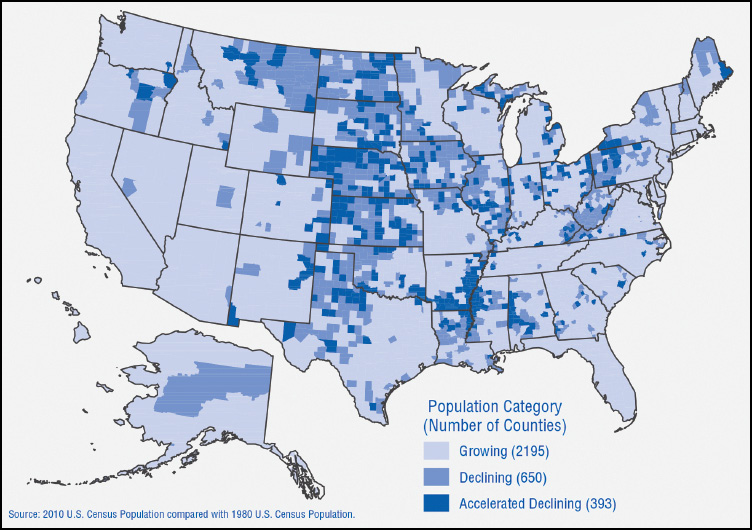 Hundreds of formerly thriving Plains states counties have been steadily losing population. One third of all rural counties lost population in the 30-year period from 1980 to 2010, and these are concentrated in the Midwest. Institutions have been amalgamated or shut down—schools, churches, social centers.

As the number of farm families, and farm income have declined, support businesses have shut—from car repair and gas stations, to dentists and pharmacies, to stores of all kinds. Farm families remaining on the land now drive long distances for necessities and services. This same process is underway in farm areas everywhere cross country, not just in the Midwest Farm Belt, where it shows up as extreme.

The medical system for rural areas is contracting to the vanishing point. As of this March, it was estimated that 20% of rural hospitals are in the red, and on the verge of shut-down. Over the period 2013 to 2017, 64 rural hospitals closed, following on 30 shutdowns in the prior five years. The picture is that 430 out of the 2,035 rural hospitals (out of the national total of some 5,000 public hospitals) are facing shutdown. Half of Alabama’s hospitals are in this category, as are one-third of those in Arkansas, Georgia and Mississippi. The situation is similar in Alaska and Maine.

In addition, the ratios of other basic health care facilities and services—from the number of beds for elderly residential care, to the number of mammography machines, to the number of obstetric and natal clinics—are way below modern standards in hundreds of rural counties, especially in the Southern states. Moreover, even hospitals that are still open, have a bed count far below what is needed. It is now common to have “boarding” of patients in emergency rooms, on gurneys, for days, for lack of proper beds.

Thus, the day-to-day environment of dying towns, the loss of hospitals, churches, schools, cultural centers and all the rest, plus income crises, are grounds enough for personal upset, if not despair.

Making it far worse, are the delusions deliberately pushed by the propaganda wing of the British free trade system, which drives globalization of banking, commodities and industrial monopolization. A series of fake solutions to rural life and livelihood, that people are supposed to swallow, have been promoted over the past decades.

For example, farmers are told that biofuels are the salvation for corn and soybean prices, that hemp is the new way to increase income, that putting wind turbines on your land and solar panels on your roofs will give you some bucks and save the world from over-heating, etc. Many in farming or living in rural communities, know these recourses are not only no “solution”—but they are unscientific rip-offs. “But,” they ask themselves, “what else is there?”

Add the drug scourge to this picture, and conditions for suffering and despair are guaranteed. In fact, rates of opioid addiction and meth use, as well as alcoholism, are worse in rural communities than in urban and suburban areas. This relates to rural poverty, isolation, dangerous work, disasters, and a dead-end rural economy. There are many ugly patterns.

For example, secluded areas on farms are targeted by meth lab operators—sometimes in pop-up facilities, or what are called “backpack” sized labs—in order to elude detection, and to originate supplies to cities nearby. The Pennsylvania Farm Bureau website even has a special “Meth Awareness” page, advising farmers: “If you suspect a meth lab on your property or in your area, do not attempt to confront the individuals yourself. Lab operators are often heavily armed, and may react violently.” The webpage cautions: “If you find any suspected meth lab waste, do not touch or get near any of the material. Even small amounts of the waste can kill or severely injure you.”

The suicide rates in geographically rural areas are some of the highest in the nation. In fact, in many years over the past three decades, suicide rates among farmers and agriculture workers exceeded homicide rates in these same social groups.

Contrast this to the growth of rural towns and family farms set in motion by deliberate Federal policies at key moments in U.S. history, under the principles laid out by the first Treasury Secretary Alexander Hamilton, and followed, for example, by President Abraham Lincoln. The expansion of the railroads initiated by Lincoln, along with his agriculture policies, saw each new rural community become as self-sufficient as possible—in food output, mechanics, education, etc.—while at the same time producing for people elsewhere in the nation, and in far-off lands. Thus, producers and consumers were brought closer to each other, as Lincoln’s economist Henry Carey liked to point out (as in his 1851 The Harmony of Interests) to the mutual benefit of all. This was the American System in action, in opposition to the British imperial system, whose “free” trade globalization today is causing terrible destruction.