June 22—Following the end of World War II, San Francisco held the greatest promise of any city in the world. California was quickly becoming the greatest agro-industrial state in the nation, and possibly the world, and this was largely based on the most extensive water and irrigation infrastructure ever developed, in some of the world’s most fertile soil—the Central Valley. This was combined with an intense focus on aerospace, auto manufacturing, and nearly a dozen top national facilities in advanced research and development in nuclear power, lasers, computers, and much more.

Moreover, California, and San Francisco especially, were to become the gateway to Asia, much for the same reason the first assembly of the United Nations took place in San Francisco in 1945. The post-war world was moving towards the great populations and development potential of China and East Asia, India, Southeast Asia, and even towards Africa.

Yet, instead, within twenty years of the end of the war, San Francisco was becoming the victim of the greatest cultural experiment ever waged, perhaps only parallel to the cultural destruction of ancient Athens by the high priests of the Persian Empire.

By the time of Plato, the Persians had twice attempted to destroy Athens militarily, and had twice failed, much like Britain’s attempts to destroy the United States during the 19th century. So rather than risk another disastrous military campaign, the high priests of Persia planned a cultural destruction of the scientific and artistic identity that had made Athens so fiercely independent, skillful, broadly educated, and thus nearly indestructible. By the time of the Peloponnesian War between Athens and Sparta, Athens had succumbed to Persia’s dissemination of cultural relativism known as Sophism, where truth is regulated to opinion, and morality, justice, and the common good are subjected to the whims and interests of an oligarchical power.

In the United States in the wake of World War II, Britain’s Winston Churchill and the British pawn President Harry S Truman, like the Persian agents 2300 years earlier, opened a broad assault on the intellectual life of American culture, an assault which had actually begun by the turn of the century, but which was now unleashed through the new means of mass propaganda.

In response to Truman’s Cold War culture of white-collar conformity, where prestige was based on security clearance, and Betty Crocker suburbia, where culture was reduced to Mickey’s Mouseketeers, a reactionary youth counter-culture was created by British intelligence agents like Bertrand Russell. And so San Francisco, the city on a hill which looked to the potential of the Pacific, of Asia, and which seemed destined to become a new renaissance city the likes the world had never seen before, was now directly targeted to become a cultural wasteland.

The British-led counter-culture, with the first expressions in the pro-drug culture of the Beatniks, was soon to become dominated by the coming-of-age of the Mousketeers, who came to be known as the Hippies or Baby Boomers, through a cultural operation dominated by the Sophists’ pursuit of personal pleasure, combined with the terror of nuclear annihilation, the Kennedy and related assassinations, and the launching of the Vietnam War.

After 50 years of rampant fraud supported by the likes of Henry Kissinger and George Shultz,[fn_1] combined with the frenzied speculative bubbles launched successively since the end of the Cold War, we now have the ultimate Grand Finale of the 1960s cultural revolution—a revolution which accurately boasts of having created scores of pubescent millionaires and a few oligarchical billionaires—with billions left to die in poverty, disease and warfare around the world, and now increasingly in the United States.

The West Coast cities are now the national centers for not only homelessness, drug use, human waste and disposal teams called “poop squads,” but also the revival—not only of dead-beat rock musicians and Hollywood has-beens—but of old-world diseases like typhus and even bubonic plague, which if not already here, is certainly not far behind as rodents infest the iconic Los Angeles City Hall.

But all of this is becoming rather common knowledge, so let others speak to this ongoing West Coast hippy wonderland, before we address what is the ultimate and only solution. 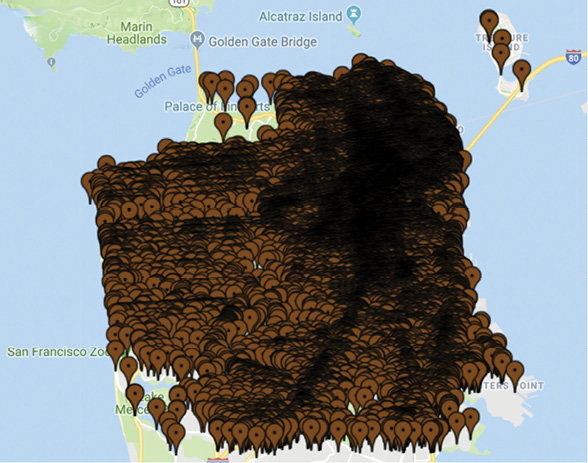 OpenTheBooks.com
Sites in San Francisco where human waste was reported, from 2011-2019.

In a Forbes article from April 15, 2019, Adam Andrzejewski writes:

“But the city itself is in trouble. Today, San Francisco hosts an estimated homeless population of 7,500 people. Affluent sections of the city have become dangerous with open-air drug use, tens of thousands of discarded needles, and, sadly, human feces.

“Since 2011, there have been at least 118,352 reported instances of human fecal matter on city streets.

“New mayor, London Breed, won election by promising to clean things up. However, conditions are the same or worse. Last year, the number of reports spiked to an all-time high at 28,084. In first quarter 2019, the pace continued with 6,676 instances of human waste in the public way…

“Our auditors at OpenTheBooks.com plotted all reports of human waste since 2011 using latitude and longitude address coordinates of all cases closed by the San Francisco Department of Public Works.”

Dr. Drew Pinsky, a physician and radio host, had the following to say regarding Los Angeles to Fox News Radio on May 23 with Brian Kilmeade:

I live in the great state of California, the utopia that is California, which is a nightmare…

I want to give you a prediction here. There will be a major infectious disease epidemic this summer in Los Angeles…

We have tens and tens of thousands of people living in tents. Horrible conditions. Sanitation. Rats have taken over the city. We’re the only city in the country—Los Angeles—without a rodent control program. We have multiple rodent-borne, flea-borne illnesses: plague, typhus. We’re gonna have louse-borne illness. If measles breaks into that population, we have tuberculosis exploding. Literally, our politicians are like Nero. It’s worse than Nero.

And then on May 31 with Fox’s Laura Ingraham, Pinsky said:

We have a complete breakdown of the basic needs of civilization in Los Angeles right now.

We have the three prongs of airborne disease (tuberculosis is exploding), rodent-borne (we are one of the only major cities in the country that does not have a rodent control program), and sanitation has broken down. 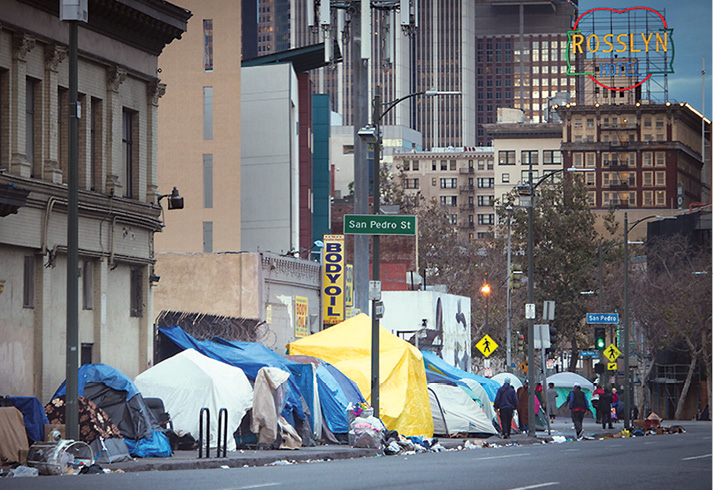 lacounty.gov
Makeshift shelters of the homeless on a sidewalk in Los Angeles.

He then said that bubonic plague—a pandemic that killed tens of millions of people during the 14th century – is “likely” already present in Los Angeles.

This is unbelievable. I can’t believe I live in a city where—this is not the Third World, Laura, this is medieval. Third World countries are insulted if they are accused of being like this. No city on Earth tolerates this. The entire population is at risk.

The Solution: A New Renaissance

Pinsky is right, the entire population is at risk. The entire nation, but more so, the entire world is threatened by the continued tolerance of this rock-sex-drugs Hippie culture, a culture spawned from the caverns of British Intelligence in the 1950s to end scientific and industrial progress, and spread the disease of cultural pessimism for a New Dark Age of medieval rulers and slaves.

There is no difference in the cultural mindset, i.e., seeking pleasure and avoiding pain, between the hippies of Haight, or the marketing scheme of Silicon Valley’s surveillance industry, or the speculative short-term debt frenzy of Wall Street. Get pleasure—i.e., money now—by any means available, and screw the real world consequences for everyone else.

The Bush foreign policy was the same paradigm, “They will welcome us as heros!” Bush said. Instead, he and Obama spawned a medieval culture threatening a global dark age throughout Southwest Asia. The same was true for the Obama bailouts to Wall Street, where Main Street was suffocated to near death with the loss of local banking and industry, while Wall Street has continued to post $50 billion in profits—not revenue—each year.

What’s required is a new culture, a new paradigm, where the human individual is both the measure and the measured.

The view from Telegraph Hill in San Francisco, where the towering Columbus looks west towards the Orient, towards the collaboration between the great Renaissance of Europe and her political offspring, the United States of America, with the ancient civilization which has become the modern miracle of today’s China—this collaboration, this is the cornerstone of the new paradigm.

A paradigm where billions are taken out of poverty, and mankind finally grows beyond puberty into a healthy loving state of adulthood, a society oriented towards the great exploration of our universe and the fulfillment of that creative endeavor known as humanity.

[fn_1]. These are the two Americans most responsible for the destruction of the U.S. and much of the world over the last 50 years. See the Theranos case if you are unfamiliar with their roles in the great fraud of Silicon Valley. [back to text for fn_1]