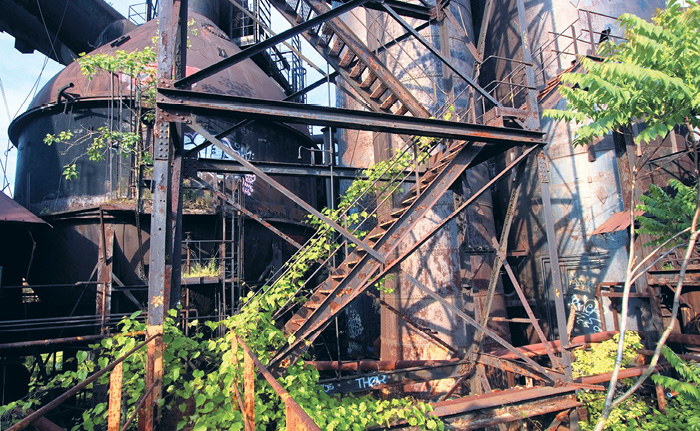 June 17—Large parts of the former Great Lakes powerhouse manufacturing belt are now industrial wastelands, from western New York, through to Wisconsin, and from St. Louis eastward into the Ohio Valley and West Virginia, and the same holds for other former factory centers, such as Birmingham, Alabama. These areas once produced myriad industrial products, and at the same time, socially and culturally, they produced the skilled and productive people who drove the process. When the factories left—beginning in the 1970s, then accelerating during the 1990s globalization through today—the physical conditions of life fell apart, from homes to institutions: hospitals, churches, museums, school districts and local government functions. Add to this, the downshift culturally, the persistent war deployments and other degradations, and conditions of life are hard and sad for millions of people.

Overall, manufacturing jobs declined 35% nationally over the last four decades, from 19.5 million in 1979, down to 12.5 million today. This decline was geographically concentrated in the Great Lakes industrial belt, but affected dozens of lesser manufacturing centers across the country, including Baltimore and Birmingham. One expression of this process of de-structuring of productive concentrations is that the population itself declined dramatically in these former manufacturing cities over this same period, as people not only moved out into the suburbs, but left the metropolitan areas entirely, seeking their livelihoods elsewhere.

In the mid-2000s, Lyndon LaRouche launched a mobilization to reverse this decline. He intervened with a national recovery program, in the context of furthering international collaboration for world economic development through a “New Bretton Woods” fixed-exchange-rate system of financial and foreign relations for that purpose. He commissioned work to “animate economics,” as he called it, through video, mapping and other illustrations, to try to make clear to people, what principles are involved.

However, despite all efforts, the underlying industrial takedown process proceeded in the 21st century. This dynamic was intensified both by the 1999 rescinding of the Glass-Steagall banking law—which had worked for 66 years to favor banking and credit for physical economic development, not speculation—and the passage of the 2001 Commodities Futures Modernization Act, which unleashed waves of unheard-of financial gambling, to the destruction of the real economy. 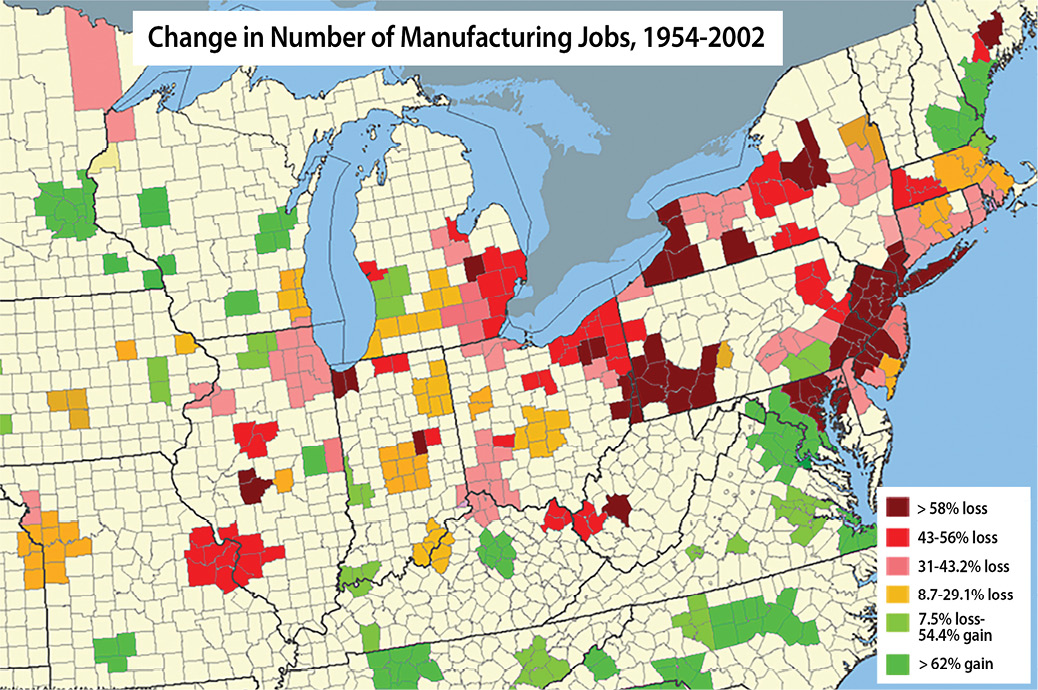 CC/SA 3.0
The loss of manufacturing jobs has been devastating for entire regions of the country; from the Great Lakes, across Pennsylvania, New Jersey, New York, and up into New England. (To say nothing of other regions in the southern U.S.) Major cities in the region shown lost from 5 to over 25 percent of their population since just 2000, while three metropolitan areas lost more than four-fifths of their manufacturing jobs since 1954: Steubenville, OH, Johnstown, PA, and Augusta, ME.

As the revenue base of industrial cities shrank, urban government functions and responsibilities could no longer be fulfilled, and outright insolvency set in. Federal municipal “Chapter 9” bankruptcies (or the state legal equivalent, “financial distress” statutes) were declared in major locations. In July 2013, Detroit declared the largest Ch. 9 bankruptcy in history, with a debt of nearly $20 billion. Already in 2003, Pittsburgh’s finances were taken over by the Commonwealth of Pennsylvania (under its Chapter 47 Municipalities Financial Recovery Act Program). In Alabama, Jefferson County (Birmingham) declared bankruptcy in 2011. Harrisburg, the capital of Pennsylvania, declared bankruptcy in 2011. In California, both Stockton and San Bernardino declared bankruptcies in 2012. Cities have cut essential services like pest control and public health, and have allowed the deterioration of basic infrastructure, such as water treatment, levees, bridges, etc.

People are in unlivable situations. In several of the Great Lakes cities, 20–30% of the households are under the official poverty level. In Pittsburgh, for example, 12% of the households earn less than $10,000 a year. The crime rate is high. Cleveland’s violent crime rate of 1,557 incidents for every 100,000 people is among the highest in the nation. McKeesport, near Pittsburgh, today the fourth worst U.S. city for violent crime, was once the largest maker of pipe in the world, giving it the name, “Tube City.” Add to this the drugs plague, and these are conditions of misery. 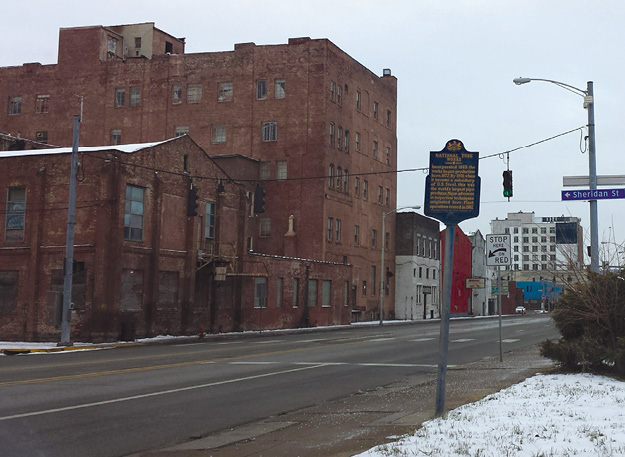 EIRNS/Robert Baker
As these scenes from McKeesport, PA demonstrate, the loss of manufacturing jobs and subsequent population collapse over decades lead to the kind of abandonment and devastation resembling post-war zones. 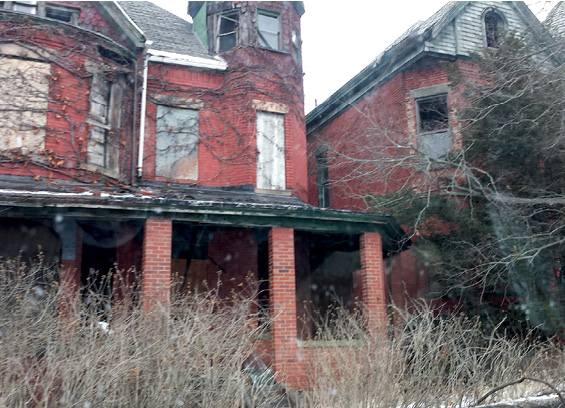 ‘Alternatives’ Were No Solutions

What were touted as economic “solutions” to the breakdown, that is, as the “alternatives” to the LaRouche Recovery plan based on the American System, have only worsened the devastation. There are examples of boondoggles of all kinds, foisted on desperate cities by Wall Street/City of London operations. The category of wonder projects includes “river walks,” conversion of former factory and mill buildings into trendy housing and entertainment venues, urban malls, and other real estate ventures. “Public-private-partnerships” for localities to obtain funds for highways and other infrastructure, have financially blown out on cities and states everywhere.

“Privatization,” the sell-off at discount rates of government physical property or government functions—trash collection, water and wastewater services—has been no “solution.”

The prominent, ambitious political names in both parties rode the waves of all the fake solutions. When he was Governor of Indiana (2013–2017), Mike Pence was gung-ho for the PPP approach to highway improvement, which was an outstanding failure. During her time representing New York in the Senate (2001–2009), Hillary Clinton claimed membership in the Senate Manufacturing Caucus, but did nothing for manufacturing, and went on, when campaigning in 2016, to advise jobless West Virginia industrial workers to just get “re-trained” for new, non-industrial work.

What has come to characterize many former manufacturing and regional economic centers, is that a mega-hospital system is now the biggest employer around. In Ohio, the Cleveland Clinic system is the largest employer in the state. In Pittsburgh, the UPMC (University of Pittsburgh Medical Center) dominates. But the broad productive base in gone.

In addition to the de-industrialization, predatory banking has taken a terrible toll. In the derivatives and home mortgage-backed securities swindles of the 2000s, which led into the 2007–2008 financial blow-out, thousands of families had terrible losses.

Now is a new opportunity to move top-down on real restoration of the agro-industrial economy, given the new national commitment to rev up productivite capacity to back up the Moon-Mars program, announced by the Trump Administration, and the public moralization at the 50th anniversary of arriving on the Moon. The entire infrastructure framework must be upgraded, from nuclear power, to high speed rail, to water management systems. Old cities can be made new, and entirely new cities take hold as well.