France and the Maritime Silk Road: Past, Present and Future 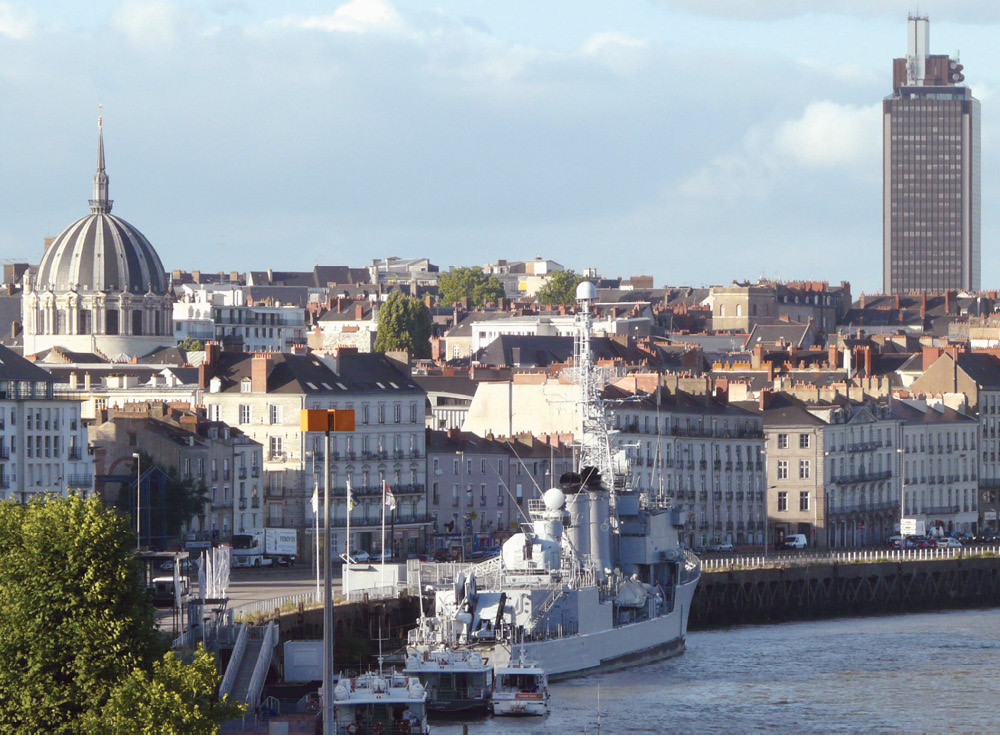 CC/Eric Brosselin
A view of the port city of Nantes, on the Loire River in France.

PARIS, July 3—The July 2 Schiller Institute conference, “France and the Maritime Silk Road: Past, Present, and Future,” held in Nantes, was a major intervention on a hot topic: France has a maritime Exclusive Economic Zone (EEZ) of 10 million square kilometers and the world’s second largest maritime economic area. Nantes—a port city of 900,000 on the Atlantic Ocean and the birthplace of the visionary Jules Verne—has a place in France’s “blue economy.”

The four-hour conference with nine speakers was part of an international maritime exposition, La Mer XXL, that drew 38,000 visitors. Several of the speakers at the Schiller event had important institutional roles in France and all of the speakers were passionate about their subjects and conveyed a sense of optimism and mobilization. The creative ideas and science-driver perspective of Lyndon LaRouche, for the common good of mankind, were very much present.

The Expo was organized by one of the largest media groups in France, the Group Ouest-France; the Maritime Credit Bank; and the French Maritime Cluster, a business association encompassing all ocean-related enterprises—ports, transport to and from ports, shipbuilding, fishing, aquaculture, and deep-water research institutions in biology and mining (oil, rare earths). 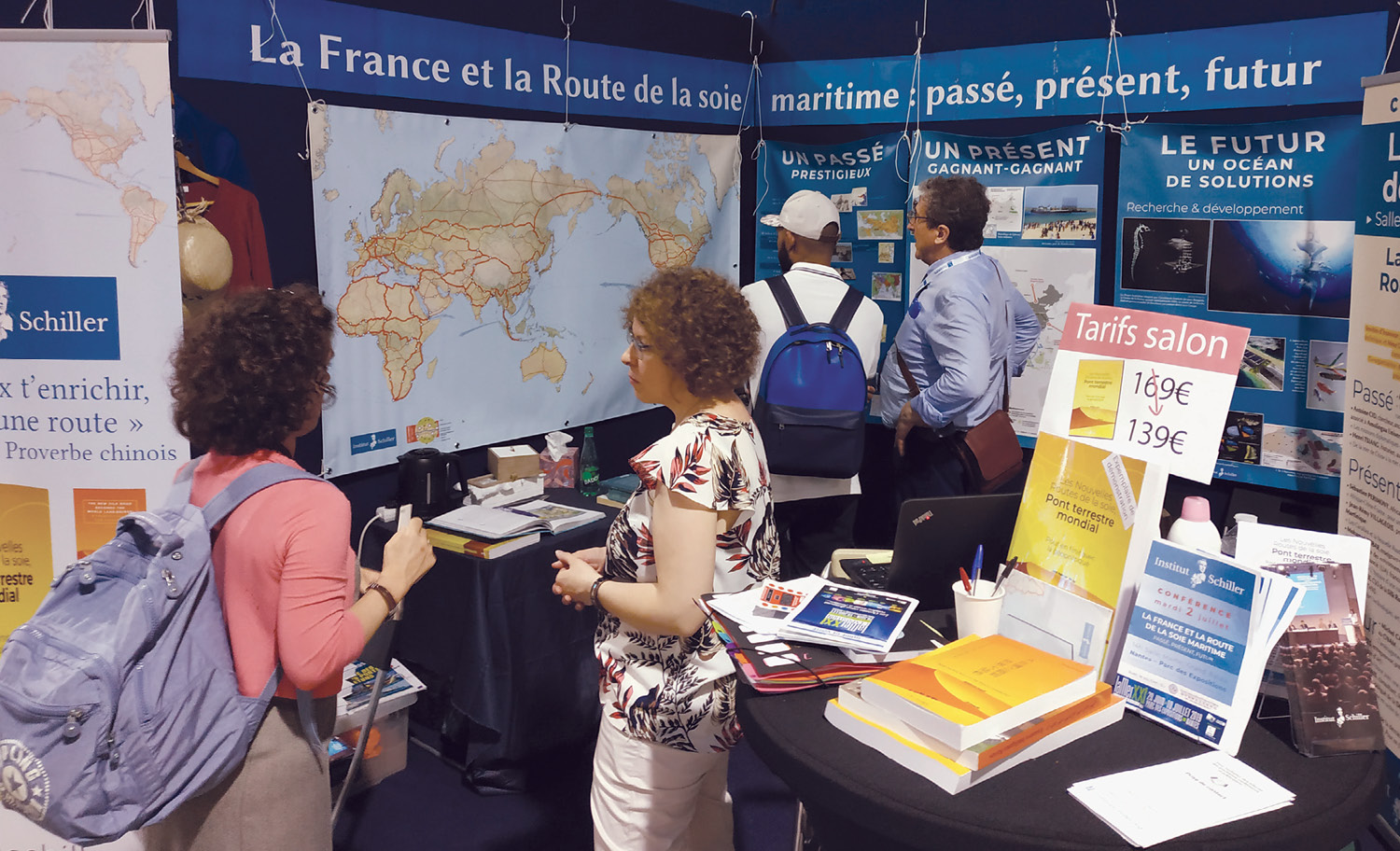 For twelve days, June 28 to July 10, the Schiller Institute manned an exhibit at the Expo. At least 200 exhibitors—associations, companies, research institutions—had booths to present their work. Schiller Institute representatives were able to present the full spectrum of the Institute’s activities and the 484-page French edition of the Institute’s World Land-Bridge report released in November 2018. In the months preceding the event, the Schiller Institute had sent out mailings to regional industrialists and companies; French and Chinese engineers and scientists; and its own contact lists, and followed up with personal contact.

The four-hour, in-depth Schiller conference drew 60 people including representatives from the Friends of the Maritime Museum of La Rochelle, and the Maritime Cluster of Luxembourg, who were eager to get copies of the Land-Bridge report. People came from as far as Provence and Switzerland to participate.

Several copies of the Land-Bridge report were sold on the spot and more during the book dedication event set up at the Expo library. A professor from Africa, who attended the conference, when passing our booth the next day, said he was so excited that he persuaded his university to order five copies. 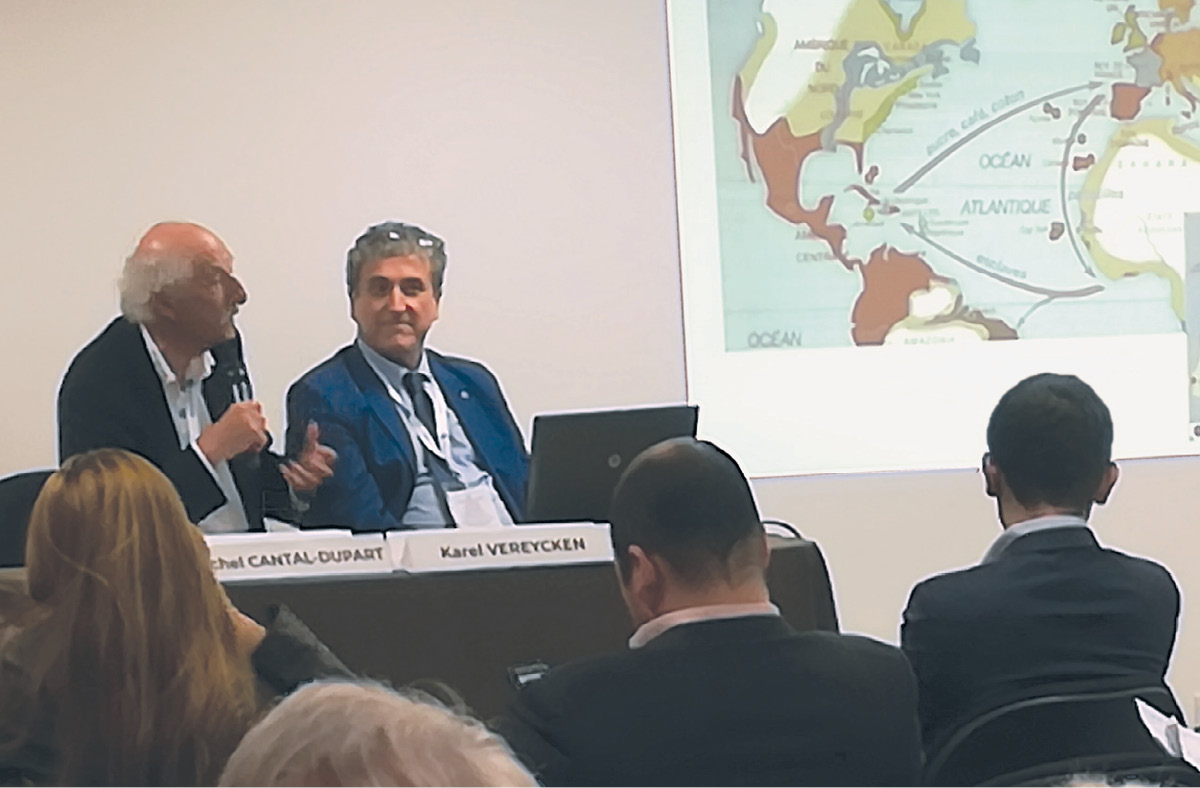 The Schiller Institute’s Karel Vereycken, who has studied the maritime domain for several years, was the moderator, and opened the floor to greetings: André Sobczak, a Nantes city councilman and the 15th Vice-President for International Relations of the Nantes Metropolitan Area, warmly welcomed the participants; Anne Lettrée, CEO of China’s Silk Road Business University and co-organizer of the event; two Minister Counselors of the Chinese embassy who were unable to attend at the last minute, and Minghong Chen, Chairman of the French-Chinese Intercultural Center.

Vereycken presented the idea that the Maritime Silk Road in history—in China and other countries—has always been a space of cooperation and not of confrontation. With images of beautiful pottery, other ceramics, and other artistic or mechanical objects and utensils, he showed how each one, produced in one area, had designs and decorations coming from elsewhere, thanks to trade on the Maritime Silk Road. He presented another example of the high degree of development of that trade, the shipwreck of an Arab vessel made in Oman, from 826 AD, which was discovered recently on the sea floor near Java, Indonesia complete with the 60,000 pieces of ceramics and manufactured goods, including some with Persian motifs. 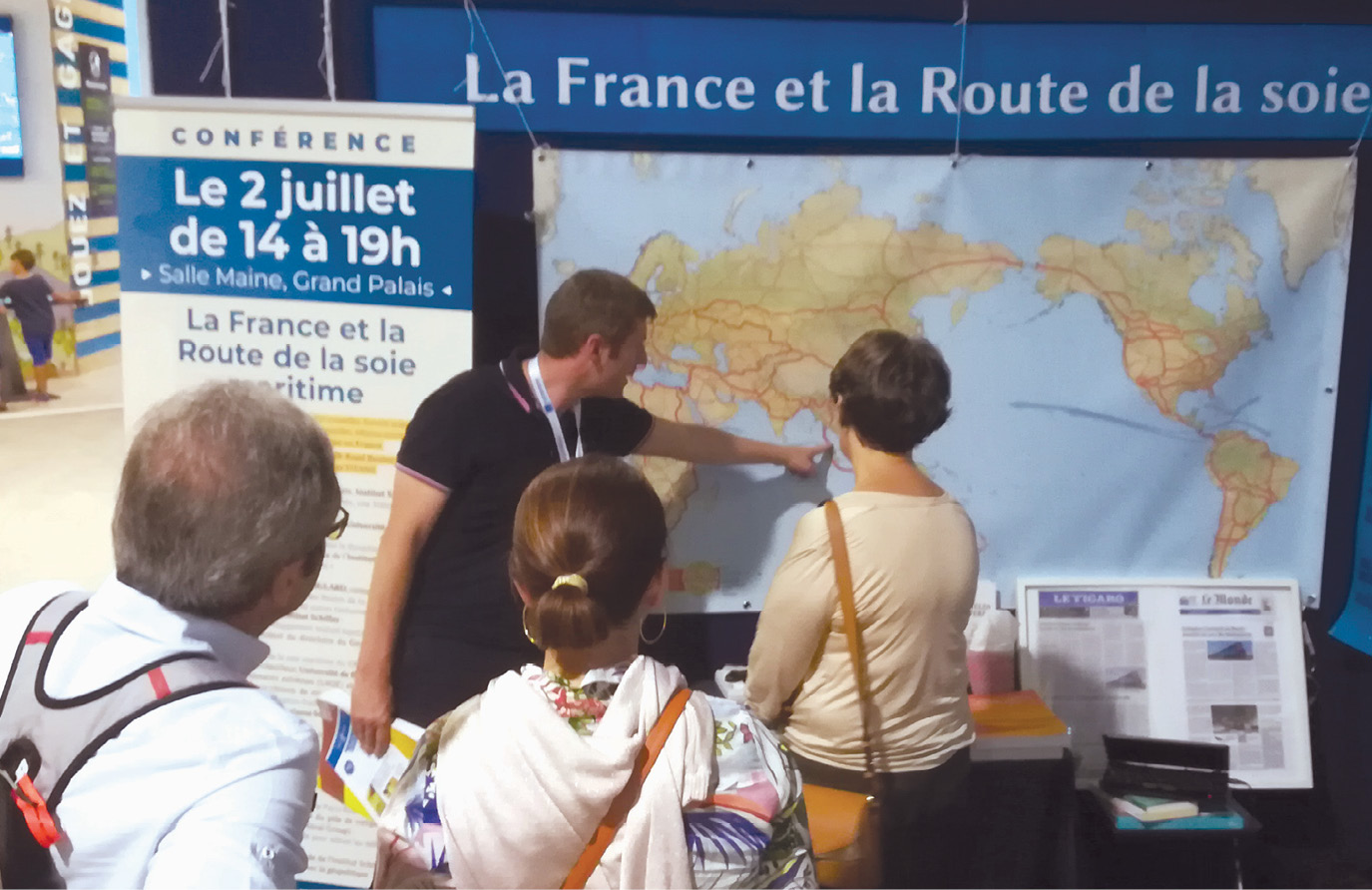 University Professor Antoine Cid followed, on Zheng He’s maritime expeditions to the Gulf and eastern Africa in the early 15th century and China’s peaceful and diplomatic objectives of cooperation. This activity was not limited to Zheng He, or to that period of time. Prof. Cid hypothesized that the Chinese, in the early part of the 20th century, decided to make this excellent story a positive epic narrative to convey the message that China is not a conquering power, on sea or on land.

Henri Tsiang, a former researcher at the Pasteur Institute, who also played an important role in mediating between France and China after World War II, went through what is happening in the South China Sea, the issues and the actors, and how the withdrawal of the United States from the Trans Pacific Partnership (TPP) has led to the expansion of other peaceful trade initiatives in the zone, a good way of solving disputes that had been used by geopolitical forces to harass China.

Sebastien Goulard, a public affairs consultant, and founder and coordinator of OBOReurope, countered the fake “debt trap” narrative and other false stories circulated to slander China. He made clear that problems can and do arise here and there, due to changes in political power in participating countries, and due to differing conceptions of investment terms: for the Chinese it’s the long term, while for the West it’s the time of an election cycle.

He showed that the Chinese are quick to find new solutions: The sale of Sri Lanka’s Hambantota port to a Chinese company, with the possibility offered to the state to acquire up to 50% ownership in 20 years, protects that port from political changes created in the country by competitors to China, in this case, India. Chinese investments, he showed, improve competition in a good way. After the Chinese financed the port, the Indians decided to build an airport, which in the meantime has become complementary to the port! 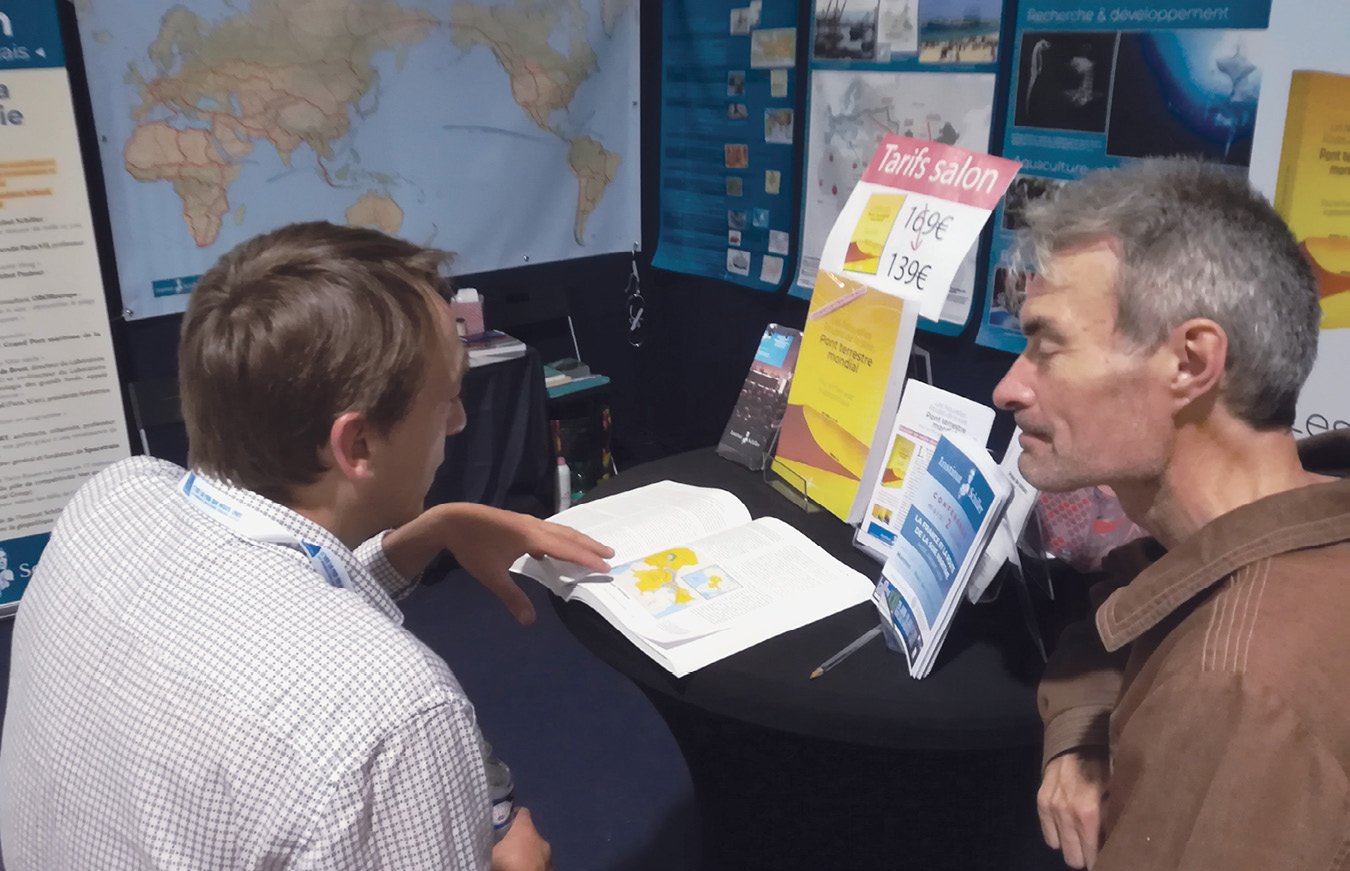 Sébastien Périmony of the Schiller Institute Africa Desk spoke about projects of the African terrestrial and maritime “silk roads,” and reported on his recent experiences in Ivory Coast and Angola. (See EIR July 5, 2019.)

The Silk Road Today and Tomorrow

The next speaker, Professor Mohamed Jebbar, held the audience in rapt attention. He is a professor of microbiology at Brest University, Director of the Microbiology Laboratory of Extreme Environments (LM2E) and co-director of the French-Chinese Laboratory of Deep-Sea Microbiology, called MICROBSEA, which he fought for several years to establish. The laboratory’s objective is to study the conditions of ocean life at a depth of 5,000 meters—where the total absence of light had led people to believe that life was not possible, or that it was determined by life above those limits. Prof. Jebbar explained that life does exist at those depths, and that it is organized by bacteria that accomplish through chemosynthesis what the Sun accomplishes on the Earth’s surface through photosynthesis. He explained to the audience how this works.

His Franco-Chinese research center collaborates with the astrobiologists of the European Space Agency (ESA) and other space agencies to see what those extreme conditions can teach us about the existence of life in space. The first test carried out in a joint effort between the Chinese and ESA was to see if the microalgae called spirulina, sent in satellites, could grow in space.

Anne Lettrée spoke on “Earth, innovation, technologies, art, nature and health, a whole program.” She is an executive of the Silk Road Business School (Paris and Xi’an) who has become impassioned with China and fully supports the New Silk Road. She is creating a large holistic park, the Garden of Titans, in Normandy, with spaces for research, artwork, and theater, combined with ecology. Jane Han, the official representative in France of China’s largest photovoltaic company, confirmed China’s interest in this park conception.

Two important French figures spoke in the last section on the future of the New Silk Road. Michel Cantal-Dupart, architect, urban planner, and professor at CNAM (Conservatoire Nationale des Arts et Métiers—School of Industrial Arts and Crafts) is engaged in large urban architectural projects and territorial infrastructure—inland waterways, rapid transport—and works with the UN to develop these programs in developing countries. He was clear in his anger at the lack of vision by successive French governments for the development of France’s waterways and canals—the largest set of inland waterways in Europe, which are all totally disconnected today. Instead of having a system, France has a series of dead ends.

He was followed by Bernard Planchais, the recently retired operational Director General at the National Naval Construction Company (formerly DCNS and today the Naval Group), producing civilian ocean liners and military vessels such as the Mistral and submarines. Planchais presented a “war plan” for France to develop its maritime economy, since France commands, after all, the second largest maritime zone in the world. While at the DCNS, Planchais worked with the nuclear sector to develop Flex Blue, a program using nuclear submarine technology to build small nuclear plants operating on the ocean floor—a great idea which, like many others, was never developed at all by our successive governments. 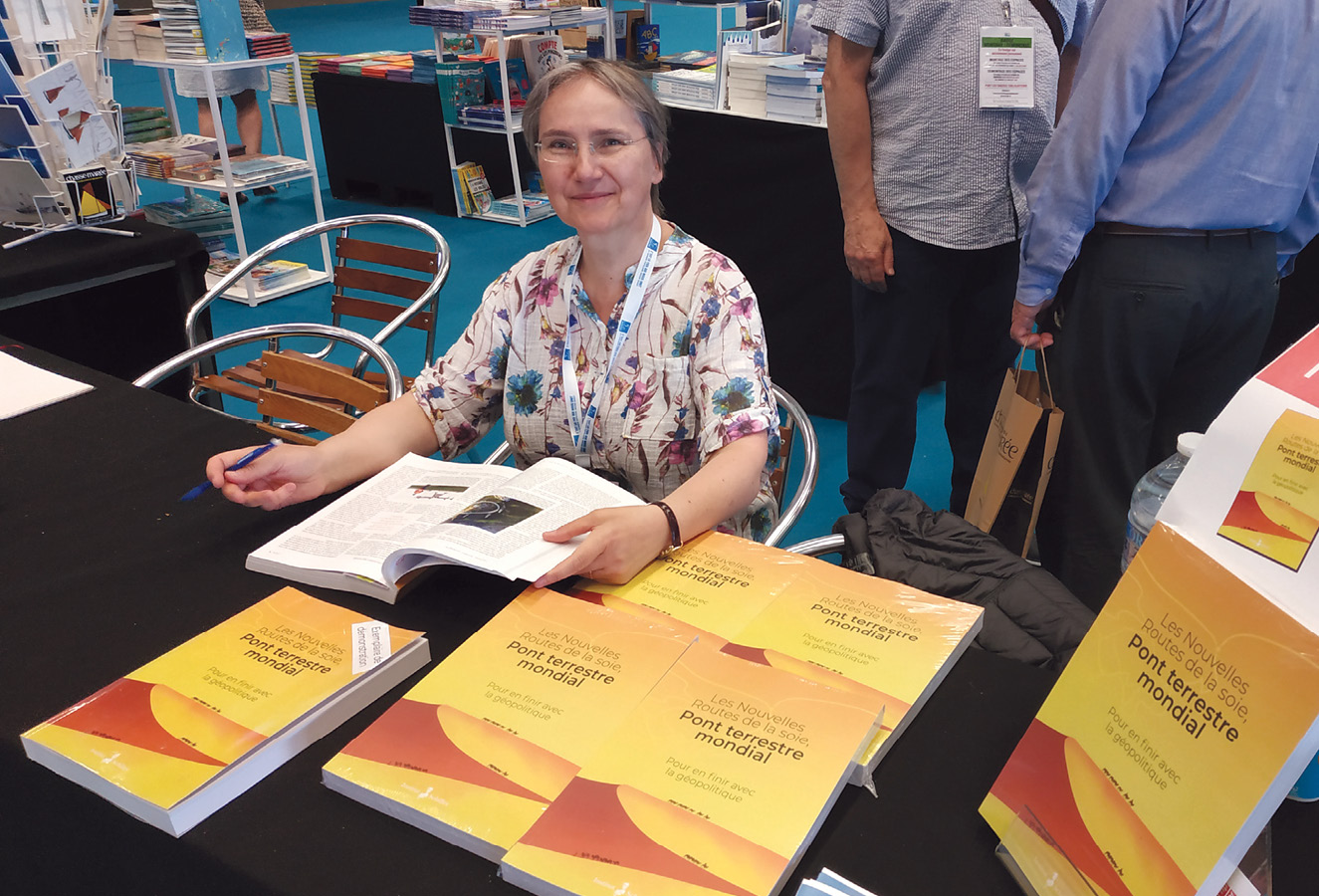 The conference concluded with Odile Mojon’s presentation of the Schiller Institute’s Land-Bridge report, in the context of the ongoing fight by Helga Zepp-LaRouche today to bring about a just new world economic order.

The organizers of the Expo were impressed by the size of the group gathered for such a four-hour, in-depth conference and requested three minutes of video footage of our event to use in their Expo publicity.