The conference proceedings will be available live at http://lpac.co/july20. To attend the conference in New York, registration is required. Suggested Donation: $20 or $10 for students. For more information, or to pre-register, call: 917-475-8828. 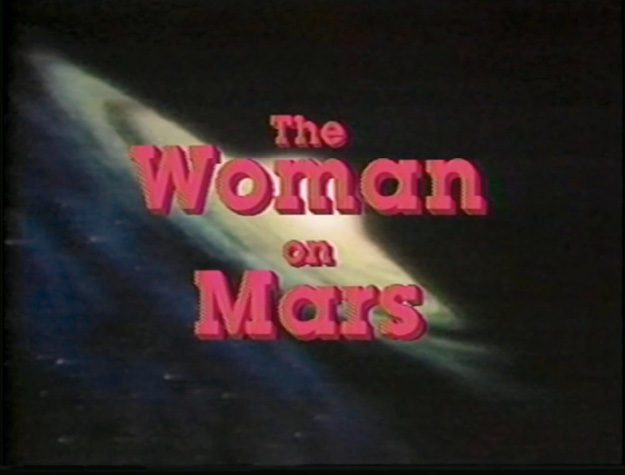 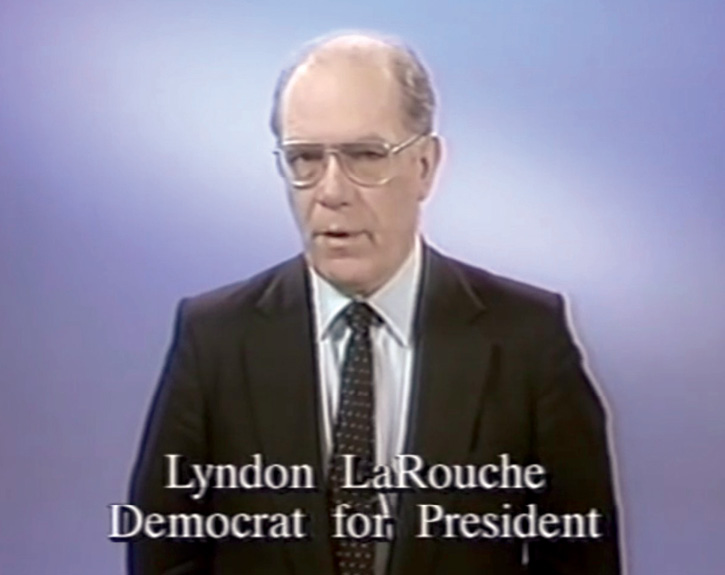 In 1987, Lyndon LaRouche authored the video, The Woman on Mars. At that time, he proposed a 40-year mission to Mars based on re-starting the aborted Moon missions, including extensive industrialization and mining on the Moon for Helium-3, the best fuel for thermonuclear fusion reactors. Nearly 20 years ago, LaRouche advanced these ideas even further in his book, Earth’s Next Fifty Years.

Thermonuclear fusion, applied as a commercial power source, not only supersedes any other available power source, and is non-polluting—it would supply the only efficient power source for travel throughout the solar system. Humanity—not merely China, or the United States, or Russia, but all humanity—has always looked up to the stars, because we have an extra-terrestrial imperative, to know the secrets of the universe. Eliminating war through the joint investigation of the solar system and galaxy—the local neighborhood in which we reside—is our first next step toward the adulthood of the human race.

On this 50th anniversary of mankind’s greatest scientific achievement, let us take a page from the same President John F. Kennedy, who had proposed the Apollo Project to an inspired America, and who, together with America’s “mortal enemy,” the Soviet Union pulled the world away from the brink of extinction in October 1962. In September of 1963, Kennedy told the United Nations:

Finally, in a field where the United States and the Soviet Union have a special capacity—in the field of space—there is room for new cooperation, for further joint efforts in the regulation and exploration of space. I include among these possibilities a joint expedition to the Moon. Space offers no problems of sovereignty; . . . Surely we should explore whether the scientists and astronauts of our two countries—indeed of all the world—cannot work together in the conquest of space, sending some day in this decade to the Moon not the representatives of a single nation, but the representatives of all of our countries. 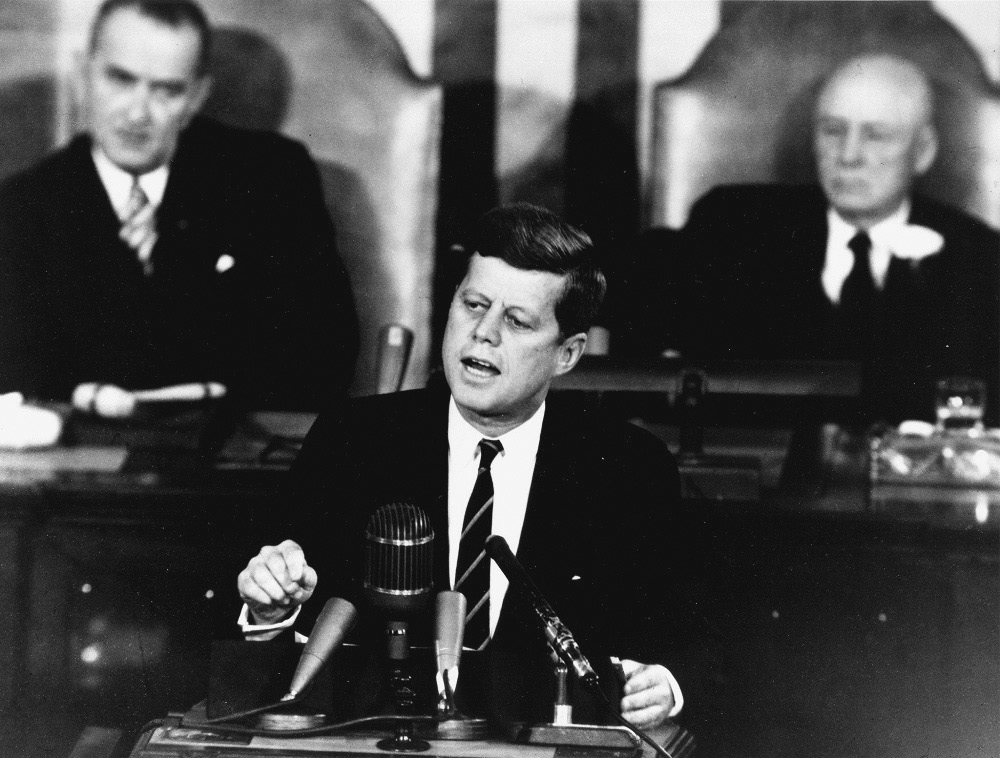 NASA
President Kennedy announcing before a special joint session of Congress the dramatic and ambitious goal of sending an American safely to the Moon by the end of the decade. May 25, 1961.

Now, many other nations—India, China, Brazil, several European nations—possess capabilities far more advanced than those of the 1960s Soviet Union or United States. If a mere fraction of the wealth now wasted on war, or foolishly misspent on combating “global warming,” were pooled and deployed in a joint space effort, we could in fifteen years create an entirely new economic platform for all of humanity—a worldwide cultural “paradigm shift” as has been proposed by Schiller Institute founder Helga Zepp-LaRouche—that propels the human race forward, in the spirit of what has been called by China “win-win cooperation,” in the form of its Belt and Road Initiative (BRI).

Lyndon LaRouche, in his 1984 “Draft Memorandum of Agreement Between the U.S. and USSR,” provided a model for a durable survival solution to potentially lethal conflicts among nations, by elevating the discussion to the higher self-interest of humanity, thereby dissolving the basis for conflict.

President Donald Trump has recently met with Presidents Xi of China, Putin of Russia, and Chairman Kim of North Korea, as well as others, to avert war. President Trump has also proposed a return of the United States to the Moon in five years, by 2024. Might the United States take the occasion of the July 20 commemoration to propose a joint Moon-Mars mission, involving Russia, China, India, the European Space Agency, and nations in the continents of Africa and South America, both essential launch sites for the continuous and permanent missions required?

Why permanent? Because mankind will now permanently move to the first level of human civilization, which is expressed in the ability to navigate the solar system as a whole. The higher, galactic level (the second stage), and the yet higher intergalactic level, are what we are now only able to observe, in part. For these, we yet “see as through a glass, darkly.” But we know that it takes humanity as a whole, in the tens and hundreds of billions, to develop the scientific competence to investigate and explore the more than two trillion galaxies we now know to exist. We need the creative potential of every single person on the planet to accomplish this. 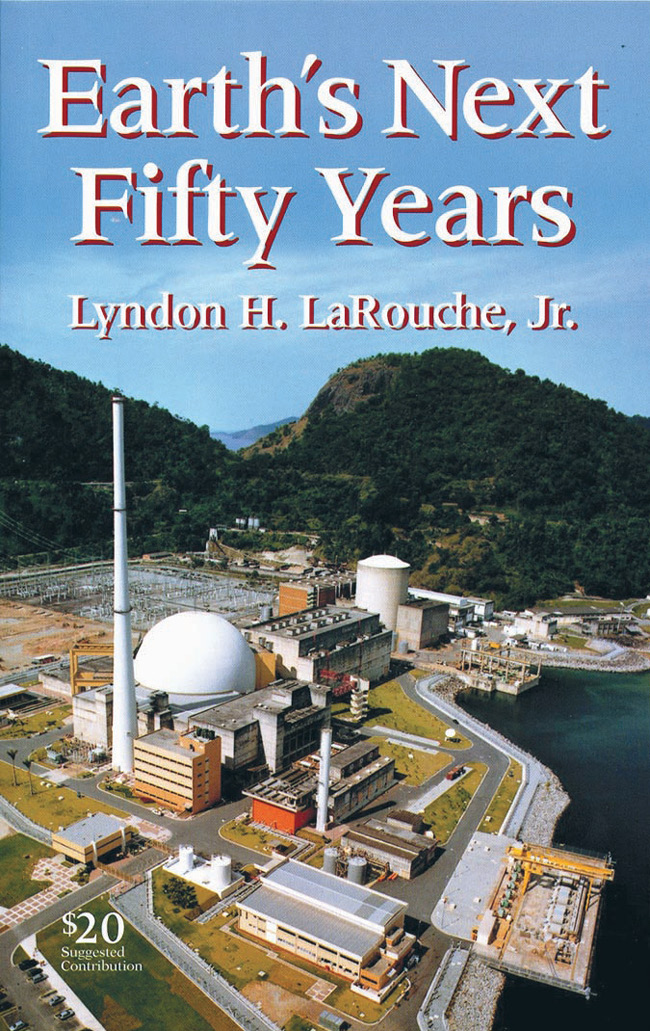 To prepare for this, the new space program must be part of a broader commitment to simultaneously revolutionize the labor process on Earth as well as in space, through new stages of technologies, and through ending poverty on the planet in the next years through the cooperative arrangements and economic development made possible through the World Land-Bridge. Both tasks require mastery of the concept of increasing the energy flux-density of power systems. Lyndon LaRouche’s book, Earth’s Next Fifty Years, outlines how more than one billion jobs in mining, manufacturing and agriculture, of the highest skill levels, must be created now, to fulfill mankind’s “extraterrestrial imperative” to investigate the solar system, the galaxy, and beyond.

It is the power of this vision, the potential of what the astronauts saw when they watched the Earth rise from the Moon, which we of the Schiller Institute must seek to evoke in our fellow citizens, the nation, and the world, this July 20. Join us in this mission, for which “failure is not an option.”