Kesha Rogers
Egyptian Consul General in Houston Khaled Rizk (right), and Brian Lantz of the Schiller Institute share the speakers’ table at a symposium titled “Egypt After the Revolution.”

July 15—At the request of the Egyptian Consulate in Houston, Texas, the Schiller Institute was invited to co-sponsor a symposium at the Arab American Cultural & Community Center on the evening of June 27. The theme of the symposium was “Egypt After the Revolution.”

Attending were consular guests from several countries, including Mexico, Greece, and Russia; several friends and guests of the Schiller Institute; and representatives from the World Affairs Council, the Arab community in Houston, the Caribbean American Chamber of Commerce, and a number of people representing Houston’s energy sector.

The two speakers were the Houston Consul General of Egypt, the Honorable Khaled Rizk, and Brian Lantz, the Houston Schiller Institute representative. The Schiller Institute’s bold perspective and strategic briefing was greatly appreciated by both the audience and the conference organizers.

Following an introduction, Consul General Rizk delivered prepared remarks, reviewing the efforts of the Egyptian government, led by President Abdel Fattah el-Sisi, to stabilize and rapidly develop Egypt’s economy after the so-called “Second Revolution,” in which the Muslim Brotherhood’s Mohamed Morsi was ousted as President of Egypt.

Consul General Rizk reviewed the ensuing, rapid pace of economic developments since 2013, with major projects now underway, including the new and as yet unnamed administrative capital, located 45 kilometers east of Cairo, major new industrial zones along the Suez Canal, and new offshore natural gas discoveries and prospects for natural gas exports. He added that Egypt welcomed the Russian investment in the El Dabaa nuclear power complex 130 km northwest of Cairo and China’s cooperation, as in construction of the new administrative capital. Egypt also welcomes the cooperation of the United States, while pursuing its own sovereign policy of economic development.

The symposium was held on the eve of the G20 Summit in Osaka, Japan. Lantz briefed the assembled guests on the importance of the upcoming summit meetings between Presidents Donald Trump, Vladimir Putin and Xi Jinping. These meetings would potentially be a turning point, given the existing tensions over trade, nuclear weapons, and the crisis over Iran. President el-Sisi’s diplomatic role with all three of these leaders is an important factor for Egypt as a key participant in the development of the New Silk Road into West Asia and Africa. The emerging new paradigm of world economic development became an important subject for future discussion. The Schiller Institute’s reports on the subject, including its 2017 report, Extending the New Silk Road to West Asia and Africa, develop this in great depth.

In the spirit of Egypt’s earlier leading role in the 1955 Bandung Conference and the creation of the Non-Aligned Movement in 1961 under President Gamal Abdel Nasser, Lantz said, Egypt is now, once again, playing a leading role in South-South relations and world affairs. He pointed out the importance of Egypt’s diplomatic efforts, working among all the countries in West Asia and North Africa in particular, for peace and economic development. Lantz cited some of Egypt’s initiatives in Africa and el-Sisi’s role as the new chairman of the African Union. The African Union is deeply involved in cooperation with the Belt and Road and promoting African integration.

Lantz stressed the importance of getting the economics right—outlining Lyndon LaRouche’s principles of physical economy. Africa’s emerging renaissance was discussed in that context, highlighting its population potential and mega-projects: the proposal for a continent-wide system of highways and rail; the Grand Inga Dam, a proposed hydroelectric dam on the Congo River at Inga Falls in the Democratic Republic of the Congo; and the Transaqua Project, a major water diversion scheme to replenish Lake Chad.

Lively discussion began at the reception before the presentations and continued more intensely afterwards. Recognition of, and great respect for Lyndon LaRouche were expressed by many people. A community leader told Lantz that he had been reading LaRouche’s material for years, exclaiming, “He is a genius!” An engineer was very happy to hear of the Schiller Institute’s work in support of the Belt and Road Initiative (BRI) and volunteered his respect for LaRouche over the years. A business woman was excited to relate that she had participated in an art contest as a student, and won first prize for a drawing based on the original photograph of the Silk Road and the camels, as pictured on the 2014 report, The New Silk Road Becomes the World Land-Bridge. 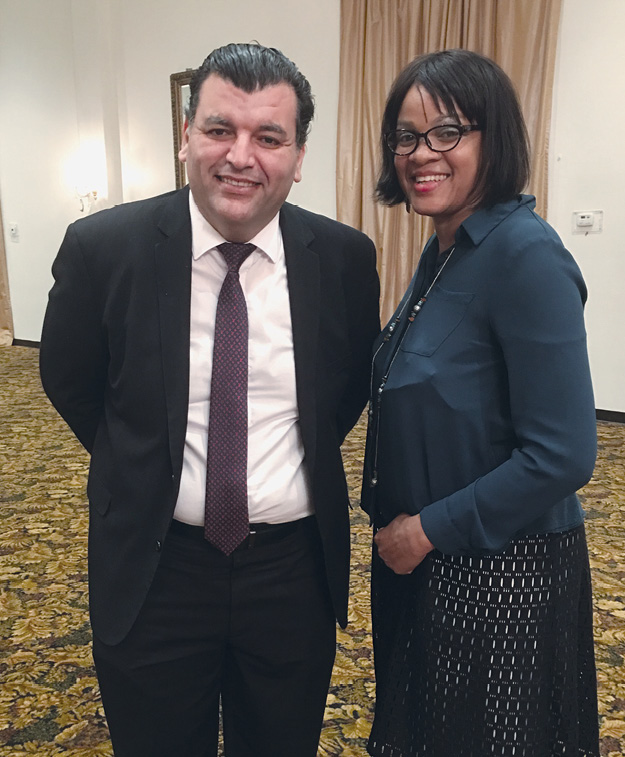 The Schiller Institute was also invited to provide a speaker at a Chinese consular event in Houston last week, before an audience of high school students, with teachers, media, and consular officials attending.

The Schiller Institute’s participation in this symposium clearly marks the rapid pace of BRI developments, and, as we have seen with the recent events throughout the United States and abroad, there is a growing recognition of Lyndon and Helga LaRouche’s role in bringing about this beautiful, and urgently needed, new economic paradigm.