This article appears in the August 23, 2019 issue of Executive Intelligence Review.

A Wall of Fire Is Just Ahead, Set by a Brit Arsonist:Will You Walk Through It?

by Barbara Boyd and Dennis Speed 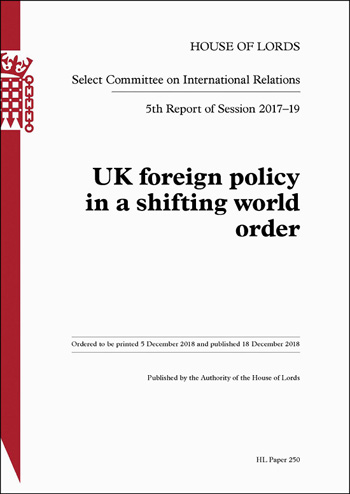 Aug.15—In the December 2018 House of Lords Report, “UK Foreign Policy in a Shifting World Order,” the British imperium targeted four nations—China, Russia, India, and the United States—for intervention and disruption. Americans are familiar with our side of this targeting: the years-long Russiagate hoax run first against candidate Trump and continued against President Donald Trump. It’s now old news—MI6’s Christopher Steele authoring the dirty dossier against Trump, a bevy of overseas informants and provocateurs, full-spectrum illegal surveillance, leaks, and information war—these were all, as former FBI Director James Comey said, “Crown” operations conducted in conjunction with the Obama White House.

Continuing their criminal interference in American elections, in the House of Lords Report, the British aristocracy rejects the option that Donald Trump can receive a second term as President. In paragraphs 37 and 39, the Report states:

The U.S. Administration has taken a number of high-profile unilateral foreign policy decisions that are contrary to the interests of the United Kingdom. In particular, U.S. withdrawal from the Paris Agreement on climate change. . . .

[T]he difficulty the UK and its allies have faced in trying to influence the U.S. demonstrates the challenge of working with the Administration. . . . Should President Trump win a second term, or a similar Administration succeed him, the damage to UK-U.S. relations will be longer lasting. . . .

That means that Imperial Britain plans to intervene again to defeat Donald Trump and they are intervening heavily, again, already. While you may conclude that the babbling fools who are seeking the Democratic Party presidential nomination will never make it, the danger is in what you don’t presently see.

The Lords’ financial system of the City of London and Wall Street is once again about to blow out. Following the collapse of 2008, which produced economic carnage throughout the world, the financiers simply reconstructed the same financial bubble, this time almost twice the size of the previous one. To maintain their power, the City of London has invented a gigantic scam—the Green Finance Institute. Their intent is to de-industrialize all Europe, especially Germany, looting the revenue from tens of thousands of businesses and even personal accounts in the name of saving the planet.

Additional funds will finance a new international eco-fascist movement, by means of which people, under threat of force, will accept deadly austerity and genocide against themselves, which will drive population level down to that which completely deindustrialized nations might be able to support. Under the rubric of a youth-driven “Extinction Rebellion,” they plan to eliminate six billion people.

The late economist and statesman Lyndon LaRouche said there were four countries, the economic potential of which, if allied, could not only survive the collapse of the British imperial financial system, but emerge from that collapse at a higher level of productivity and culture. Those nations are Russia, China, India, and the United States. LaRouche proposed that those four countries collaborate on joint development of advanced technologies, basic science, space exploration, and large-scale infrastructure development. He proposed that these four countries collaborate, at the same time, on a new Bretton Woods monetary system, fixing exchange rates and enabling the issuance of massive amounts of low-interest credit to support a world of sovereign nation states, reciprocally trading with one another for mutual advantage and cooperating in rapid physical development of underdeveloped nation states. LaRouche’s proposal would eliminate the British-sponsored speculative casino economy that has ravaged the world.

The expanded productivity inherent in this proposal would not only support the world’s population at a higher level, it will require that the world actually be inhabited by many, many more people.

The Four Powers Under Attack

• Demonstrations against President Vladimir Putin in Russia are now occurring, orchestrated by a “peace” movement based on non-governmental organizations (NGOs). These NGOs, operating under the cover of being non-profits, ostensibly independently of any government, are in fact acting as fronts for the same Anglo-American intelligence entities and financiers, such as George Soros, who promoted the phony Russiagate lie aimed at destroying President Trump, and tore our country apart with war hysteria against Russia and against this President’s calls for peace.

• China is being targeted through the former British colony Hong Kong. Violent “democracy” demonstrations are aimed at provoking the Chinese government to respond militarily, boxing President Trump into an impossible position where he will, they hope, be forced to abandon any form of collaboration with his friend Xi Jinping, particularly as the 2020 election looms and Democrats and establishment Republicans assail the President with claims that he is not tough enough.

Anyone who is not deluded knows that the financiers of the City of London and Wall Street and the corrupt politicians they have enabled are the bandits who stole the American economy and moved it to China and other low-wage destinations. The President himself says he does not blame China and instead singles out the globalist institutions like the World Trade Organization (WTO) which our elite traitors signed us into. If China has stolen anything from the United States, it is the idea of directed credit to support basic science, productive and modern industry and transportation, and building great infrastructure projects, something which we used to do before we were persuaded to become a “consumer” society.

• The British are also stoking the old Kashmir conflict between India and Pakistan, a conflict rooted in the racial and religious divisions heightened and exploited under British colonial rule.

• In the United States, we have entered “Phase Two” of the coup against the Presidency, featuring the mindless, yet oft-repeated phrase, heard regularly in fake news, especially MSNBC and CNN, that “anyone who voted for Donald Trump or supports Donald Trump is a white supremacist.” These claims are aimed at provoking or justifying acts of violence.

What the ‘Deep State’ Really Is

Those who believe that the British Empire ceased to exist after World War II are ignorant of the fact that the City of London presently controls the world’s financial flows. Most of what formerly was Wall Street now lives in the one-square-mile financial district along the River Thames, called the City of London (or “the City”), an enclave in London, the UK capital, governed by the City of London Corporation for a thousand years. British think tanks and intelligence agencies control the ideology factories and propaganda fonts by which populations are subdued and herded into the emotional shows and entertainments of the day, as the ancient Romans did. Their charge is to maintain, at all costs, the City’s financial power. It is that combined power, which is often referred to in the United States, erroneously, as the Deep State.

The British Commonwealth, under Queen Elizabeth II as sovereign, comprises over 31% of the world’s population and one in three countries in the world. It controls international organized crime and the drug trade, and has fostered and promoted Islamic terrorism as a force for hybrid warfare and regime change. This modern British empire has deeply infiltrated the foreign policy institutions of the United States and our leading universities since the end of World War II, resulting in ideas of British origin, such as the “post-industrial society” and “anthropogenic climate change,” becoming hegemonic in our society, destroying our commitment to science and ravaging the rational potential of young minds.

The name Lyndon LaRouche has been synonymous with the idea, “crush the British Empire,” for four decades. The British imperium understands LaRouche’s plan for their destruction and for the emergence of creative humankind in their wake, just as they understood, and fiercely fought, the same intention from Franklin Roosevelt.

They also understand that President Trump has flanked them with his support of the nation state, his efforts to create productive jobs in manufacturing and infrastructure, his efforts to end their wars, and his announcement of his space initiative, the plan to get back to the Moon by 2024 and then to proceed to Mars. They understand that an economically mobilized and scientifically advancing United States—a situation made possible by the President’s commitment to returning to the Moon and colonizing Mars—can lead to agreements among the “four powers” that will end the British Empire once and for all.

The fact that this Presidency has withstood their initial, full-scale and reckless attack has now left them in a very exposed and very weak place, a weakness they have not experienced since the end of World War II. They are wounded, but yet determined and intent on taking down anyone who gets in their way.

A President who knows he can rely on a rational and advancing population without playing Washington’s evil games, can bring this great historic change about, a change necessitated under the conditions of crisis which are about to emerge.

Domestically, we need LaRouche’s Four Laws for Economic Recovery: Glass-Steagall banking separation and a national bank (or similar plan) for creating credit directed solely to physical-productive purposes—huge modern infrastructure projects, city building and rebuilding, basic science and R&D. These will be vectored to increase both productivity and the standard of living. We need funding for the crash programs—the space exploration the President has already outlined, together with a crash program for fusion power.

These Four Laws will drive our economy forward and create real productive jobs. The great adventure of space will fire the imaginations and minds of our young people.

Internationally, the Four Powers should begin conferring to establish a new Bretton Woods monetary system and to develop joint plans to both explore space and fully develop our Earth and its people. In such a changed world, no one will listen to the formerly powerful anymore. This great change will be, in addition, for this President, the sweetest justice against the foe who set out to destroy him.

Will you help us create the community of citizens that will ferociously support these policies, so that we might bring about this great and wonderful change?