This article appears in the August 30, 2019 issue of Executive Intelligence Review.

TO THE MOON AND MARS

The B&O and the M&Ms 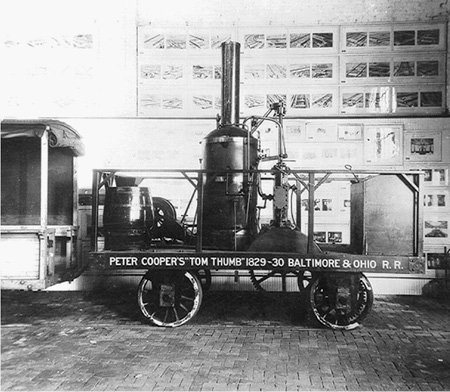 Aug. 24—During the science-and-technology oriented administration of President John Quincy Adams, and in the wake of the opening of the Erie Canal, a group of leading people from Baltimore met in 1827 to discuss what to do about the tendency of the new canal to draw traffic away from the Port of Baltimore and towards the Port of New York.

A decision was made: Pooling the resources and powers of the State of Maryland, the City of Baltimore, and private citizens, a road would be built from Baltimore out towards the Ohio River valley. This Baltimore & Ohio Railroad would be a road of wooden rails topped by straps of cast iron set across granite ties—and wagons would be pulled by teams of horses. But horse-drawn cars on iron strap rails could be faster than steamboats up the Hudson and mule-drawn canal boats through the Erie Canal.

The first 26 miles opened in 1830. That same year, Peter Cooper built a primitive prototype steam locomotive, the Tom Thumb, to convince the B&O leadership of the superiority of steam power over horseflesh. The demonstration of Peter Cooper’s creation convinced the B&O to pursue development of operational engines, and thus began the railroad-vectored development of America. Soon the success of the B&O steam railroad technology caught the national attention. Cities, states, the federal government, private investors were all involved in a race to build rails to open the West. 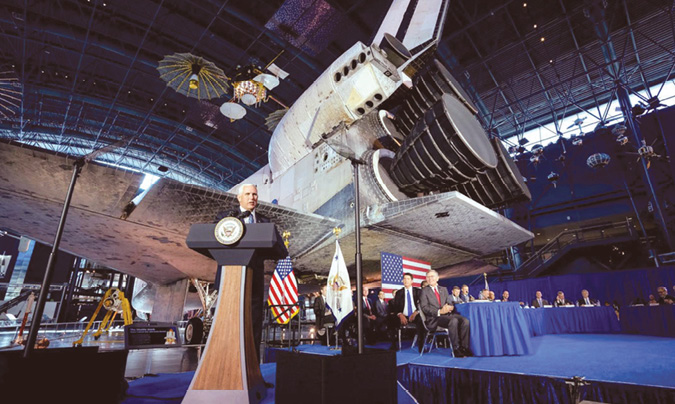 A similar process began this week at the sixth meeting of the National Space Council, held on August 20, 2019 beneath NASA’s Space Shuttle Discovery in the McDonnell Space Hangar, at the National Air and Space Museum’s Udvar-Hazy Center in Chantilly, Virginia.

At the fifth meeting of the Space Council in March 2019, Vice President Mike Pence announced President Trump’s intention to accelerate NASA’s plans to return humans to the Moon. President Trump’s new target of “boots on the Moon” by 2024 put NASA into a scramble to reorganize. All ongoing and medium-term Lunar plans were sped up. The Obama-banned Lunar Lander plans had to be quickly pulled out of deep-freeze. The nearness of the target date has forced a focus on acceleration of all of the known and planned systems.

In the historical parallel, the B&O leadership knew that they could build a railroad using proven technologies. But using those technologies to reach all the way to the Ohio River was a big stretch. Similarly, NASA has been concentrating upon the perfection and improvements of known technologies to begin the process of human settlement and development of the Moon. But the tried and true will not do for Mars.

Then, in came the M&Ms! NASA Administrator Jim Bridenstine tells the story: “I was at the White House, briefing members of the National Security Council on our plans. . . . And while I was there, Victoria Coates brought in a box of M&Ms. . . . These are not just any M&Ms. These are President Trump’s M&Ms. I said, ‘Now what’s it all about?’ She said, ‘M&M—Moon & Mars. . . .’ The President has been very clear: We will put an American flag on Mars.”

Yes, we are going to use lots of improved versions of known technologies, but at this sixth meeting of the National Space Council in August, for the first time, the focus was upon the development of the new technologies and procedures without which sending people to Mars is impossible. Foremost among those new technologies are fission and fusion technologies for power and propulsion—the indispensable, politically incorrect technologies long pushed by Krafft Ehricke, Lyndon LaRouche, and any serious person contemplating the spread of civilization to the planets and beyond.

Of course there were the various reports by members and guests on progress towards streamlining regulations for space companies; opening up commercial opportunities on, and possible expansion of, the International Space Station; progress made in NASA’s Commercial Crew and Artemis Projects; the modernization of GPS; and the formation of the United States Space Force to defend orbital assets from Russian, Chinese and other powers’ space force capabilities, and so forth.

But the discussion kept coming back to the revolutionary technologies needed to create the future.

It was significant that the Office of Science and Technology Policy presented its recommendations for a regulatory framework to facilitate the launch of nuclear reactors, nuclear engines, and other space nuclear systems. The results were released at this meeting as the draft “Presidential Memorandum on Launch of Spacecraft Containing Space Nuclear Systems.”

The Department of Energy reported on its space Kilowatt Reactor project and its history of nuclear space efforts.

Reports from a Panel of Experts

Finally, testimony from a panel of experts was presented. The panelists concentrated upon many of the ways in which the Moon and Mars project will be far different from the Apollo project and other previous exploration projects.

First was Rex Geveden, Chairman of BWX Technologies (formerly Babcock and Wilcox), who spoke about his company’s work on compact fission reactors as the technology that will make impossible efforts possible—from nuclear thermal rockets which can halve travel times around the solar system, to reactors to power spacecraft or industrial processes on the Moon and Mars. He noted that new technologies in development, including additive manufacturing, can radically cut delivery times for these reactors.

Dr. Clive Neal, Professor of Civil and Environmental Engineering and Earth Sciences at Notre Dame University, spoke about in situ development of Lunar resources. He said,

Apollo shows how not to conduct human exploration, because such a program, based upon international competition, is not sustainable. . . . In order to have an enduring and a sustainable, multi-decade space exploration program, two things are required . . . cooperation . . . and taxpayer investments.

NASA
NASA Administrator, James Bridenstine, addressing the 6th meeting of the National Space Council. To his right is Joseph Maguire, Acting Director of National Intelligence, and to his left is Vice President Mike Pence.

He spoke of the metals, water, Helium-3, and other resources on the Moon. He said that NASA must do the prospecting and testing to demonstrate the economic production of Lunar resources. Once resources are demonstrated to be economically extractable, the resources become classified as “reserves.” Once NASA can prove the viability of economic extraction of valuable materials on the Moon, the materials—having achieved the status of reserves—will attract private investment in mining and industrialization.

Dr. Saralyn Mark, founder and President of iGiant, testified that the differences between men and women must be taken into account in every aspect of NASA’s deep space planning. If these differences are taken into consideration from the beginning, superior teamwork and accomplishment will result in the end. 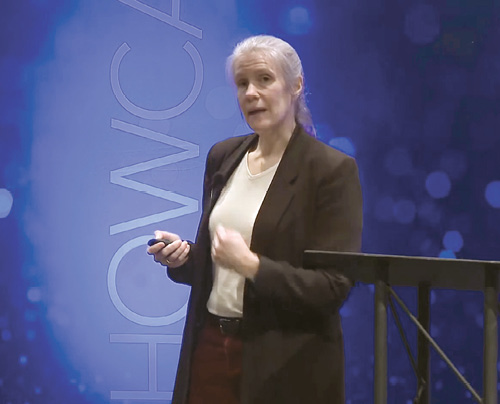 Dr. Elizabeth Turtle, lead investigator for NASA’s Dragonfly quadcopter mission to Saturn’s Moon Titan, spoke about the interplay of defense, governmental, commercial, academic, and international initiatives, leading to innovative solutions to problems and the progress of civilization in general.

In response to a question, Dr. Neal said that the biggest challenge for human operations on Mars, as opposed to operations on the Moon, is “getting there.” We must have a breakthrough propulsion system.

To a question about how the United States can maintain its leadership position, and collaborate with allies and their private sector partners, while safeguarding our intellectual property and know-how, Dr. Turtle responded:

There is so much to be gained from these partnerships, and at the same time to balance that with sharing information. That is an area we take very seriously in these international partnerships, and something we need to coordinate very carefully as we move forward. So many of these international missions demonstrated the potential of those collaborations, something that is worth investing the effort in.

The ‘Elephant in the Room’

It was a good day for civilization. We could stop there, but that would ignore the elephant in the room. As long as the London-centered predatory financial system continues to dominate America, the innate American inclination to dream, experiment, and build, is undermined. Under the domination of “cost-benefit” or “efficiency experts,” bold ideas will not be tested (not to mention developed, if practicable), because the unknown cannot be calculated. Therefore it is automatically excluded from consideration. 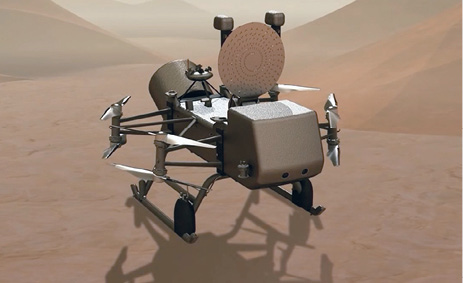 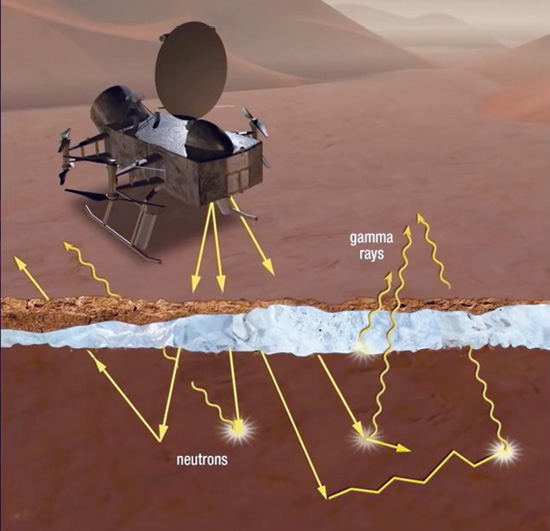 Of course the Moon-Mars project will benefit from the private investments made by companies such as BWX, but that investment will be constrained in comparison to what it would and could be under Lyndon LaRouche’s complete “Four Laws” program. As long as Federal investments are treated as money down the drain, instead of the future source of wealth that they can be, NASA will be unable to make the really big investments required. Without regulated banking and a federal credit system to allow dreams to become physical reality, the country, like the B&O, is looted to the point of collapse.

Henry Ford, who was not known for his knowledge of history, did very well understand how industry could be sucked dry by a predatory financial system:

Our railway managers have been practically forced to borrow, for since the very inception of the railways they have not been free agents. The guiding hand of the railway has been, not the railroad man, but the banker. When railroad credit was high, more money was to be made out of floating bond issues and speculating in the securities than out of service to the public. A very small fraction of the money earned by the railways has gone back into the rehabilitation of the properties.

When by skilled management the net revenue became large enough to pay a considerable dividend upon the stock, then that dividend was used first by the speculators on the inside and controlling the railroad fiscal policy, to boom the stock and unload their holdings, and then to float a bond issue on the strength of the credit gained through the earnings. When the earnings dropped or were artificially depressed, then the speculators bought back the stock and in the course of time staged another advance and unloading.[fn_1]

If this description by Henry Ford from almost a century ago sounds familiar, it is because the methods of empire have not changed much. It is high time to finally shut down the Empire by exonerating LaRouche and fully implementing all of his Four Laws. Without imperial machinations, the entirety of civilization will be able to happily work together in the daunting task of spreading itself into the cosmos.