This article appears in the September 6, 2019 issue of Executive Intelligence Review. 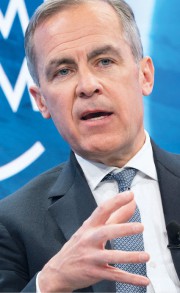 WEF/Greg Beadle
Mark Carney, Governor of the Bank of England.

Aug. 31—Bank of England Governor Mark Carney’s statement last week, at the Jackson Hole, Wyoming Federal Reserve conference, that the dollar should be replaced by a digital world currency run by the major central banks, was a declaration of intention by the big central banks of Europe to put monetary policy completely out of the reach of national governments. As discussed below, China and the United States could use their sovereign power as nation-states to roll back that attack.

Put Carney’s shocker together with the other “regime change” proposal made at Jackson Hole by the huge Wall Street fund, BlackRock LLP: This was that the Federal Reserve and other central banks should take over spending policy from national governments and should simply print new currency for spending purposes as they—and their unelected “committees of experts” see fit. The BlackRock scheme was also put forward by veteran governors of the Fed, Bank of France, and Bank of Canada, all of whom are currently BlackRock executives.

The policy amounts to a “proposed” global dictatorship over economic policy, and the issuance of currency, by central banks which represent the largest London- and Wall Street-centered too-big-to-fail behemoths. Some try to “interpret” Carney’s British imperial attack against the dollar’s role in trade and investment, as a proposal to study, for some time in the future; but his own speech claimed that it was necessary now. And he used as a model, Facebook’s intention to introduce a worldwide, private digital currency—next year. Though the U.S. Congress is trying to stop Facebook from introducing the so-called “Libra,” Carney offered encouragement for such a scheme, saying, however, that the central banks—led by the Bank of England presumably—should run it.

Carney’s claim of validity for his outrageous proposal was that in spite of everything the central banks had done since the 2007-08 crash—reducing interest rates to zero and below zero, and bailing out the biggest banks with $15-plus trillion in no-cost loans and money printing for their reserves—they can’t “stimulate” either inflation or aggregate demand to produce economic growth. In fact Lawrence Summers, the former U.S. Treasury Secretary, who was at Jackson Hole, acknowledged that zero and negative interest rates discourage investment, aggregate demand, and economic growth.

But Carney placed the entire blame for the central banks’ self-created incompetence and failure to stimulate growth, on the strength of the U.S. dollar. The central banks haven’t been able to “inflate” the dollar—lower its relative value—he said; therefore, replace it with a digital currency over whose printing and spending the central banks would have fingertip control.

The Bank of England chief could consider that the wild speculation fed by the $15-plus trillion in bank bailouts since 2007, was the reason they have lost control. Global currency trading was about $2 trillion a day in 2004 and is now at about $5.5 trillion a day; 99% of it is speculation in currency values altogether unnecessary for trade purposes. But Carney at Jackson Hole admitted no role for this.

As to what the central banks would do with such complete control of currency issuance and spending: Hyperinflationary “green new deals” top their agenda, and Carney’s personal agenda as instigator in 2017 of the “Green Finance Initiative” of 24 central banks.

What America and China Could Do

The U.S. dollar is overvalued. President Donald Trump clearly knows this and is upset by it, in particular relative to the Chinese yuan currency, as disadvantageous to American manufacturers and exporters of industrial and farm products.

But the President is playing directly into the hands of the European central bankers’ attempted coup, when he demands that the Federal Reserve adopt their negative interest rate policy, which stifles productive investment and encourages London’s and Wall Street’s unregulated and “off-balance sheet” speculation. He is not acknowledging why the dollar is too strong.

There is the immense $5.5 trillion daily volume of unchecked and unregulated currency speculation noted above. There is the central banks’ incompetent negative interest-rate policy, which makes even record-low U.S. Treasury interest rates look “high” by comparison. These are the major reasons for the overvaluation of the dollar.

The dollar’s overvaluation is underlined by the fact that labor productivity in China, according to standard measures, has been growing more than twice as fast as in the United States for nearly 30 years. This should have continuously strengthened the value of the yuan against the dollar. Simple labor productivity has grown every year, beginning in the 1990s (average growth rate 6.5%/year in China vs. 2.7%/year in the U.S., since 1992), as has “total factor productivity,” which attempts to measure the impact on growth of technological progress in industry and in building new economic infrastructure (average growth rate 3.16%/year vs. 1.6%/year).

With China’s recent decades of very large and continuous investments in new, high-technology infrastructure—and the innovations and breakthroughs necessary to build it—this stronger productivity growth is not surprising, and points to the overvaluation of the dollar relative to the yuan.

We can illustrate the same overvaluation through another basic comparison. The average income per capita of an individual in the United States is about two and one-half times that of a person in China. But if the American were to somehow receive that American average income in Chinese yuan—at the recent exchange rate between the two currencies—and spend it while living in China, his or her “local purchasing power” would be, not two-and-a-half times, but just a little under twice that of the average Chinese earner next door (according to the CEIC Data firm in Hong Kong, the Organization of Economic Cooperation and Development (OECD), and others whose studies of purchasing power in the two countries basically agree).

Thus, purchasing power and productivity growth comparisons both suggest that uncontrolled speculation has carried the relative value of the dollar too high.

These facts indicate that the United States and China could make a nation-to-nation agreement at any time to establish a fixed exchange rate for their currencies with an up-valuation of the Chinese yuan, and the removal of their new tariffs and tariff increases of the past 18 months.

They could keep the new currency exchange rate stable by establishing exchange controls to stop the speculative inflows and outflows of currency.

And both nations could establish a strict Glass-Steagall separation of commercial banking and lending, from speculative trading and derivatives activities of investment firms and hedge funds. These speculations put tremendous pressure, not only on currency exchange rates, but also on interest rates. And since 2006, this has been almost continuously downward pressure, as the speculators have profited by riding along the central banks’ policy track.

China has legislated “Glass-Steagall” separation since 1994, but the regulations of it have been loosened and need to be re-established in full. The United States Congress has pending legislation to restore the Glass-Steagall Act, which requires the President’s encouragement to move.

As presidential candidate Donald Trump proposed in 2016, “Pop the gigantic bubble on Wall Street,” and later, “Enact a 21st-Century version of Glass-Steagall.”

Such a U.S.-China agreement on fixing exchange rates and separation of speculative banking from commercial banking, if made with the mutual intention of reversing the currently worsening trade war, would increase both the ability and the incentive for China to invest some of its foreign exchange holdings alongside American investors in a U.S. national credit institution for new economic infrastructure in the United States. These are two of the basic principles—“new economic laws”—laid out by Lyndon LaRouche in 2014 as “not an option, an urgent necessity.” Those principles include re-establishing the Glass-Steagall principle and creating national banking institutions for investment in infrastructure and manufacturing on Alexander Hamilton’s principles.

A U.S.-China agreement would effectively invite other major economic and technological powers to join in a new international fixed-exchange-rate system to replace speculative flows with investments in new technologies and capital goods, particularly into developing countries.

They would be taking firm control of the issue and circulation of their own national currencies, as in the United States is required by Article I of the Constitution. This would block the plan of the European central banks, as revealed by Carney and by BlackRock LLP at Jackson Hole, to take over with the issuance of a world digital currency, and to order how it is to be spent.