Putin: Asian and Western Powers Must Take on World Leadership Together

by Richard A. Black 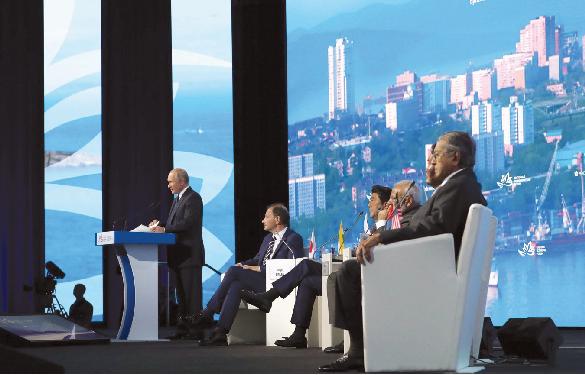 Richard A. Black is the Schiller Institute representative at the United Nations in New York.

Sept. 7—From September 4 to 6, the fifth Eastern Economic Forum (EEF) was held in Vladivostok, Russia. This is an annual event, sponsored by the Russian government to encourage economic investment in Russia’s Far East (the Far Eastern Federal District). At this year’s event, attended by more than 6,000 international delegates, Russian President Vladimir Putin delivered a speech with broad strategic implications. Speaking on a panel of five heads of state, Putin directly raised the necessity for the world’s major powers—India and China most emphatically included—to act to constitute a new leadership body to deal with world development and challenges.

President Putin was explicit on Russia’s willingness to participate in such a collaborative effort for global economic development. In response to a moderator’s question about the possibility of Russia returning to the G7 (which currently excludes Russia, China, and India), as U.S. President Trump and Japanese Prime Minister Abe Shinzo have proposed, Putin stated:

We are open. If our partners want to visit, we will be happy to see them. It was not us who postponed it; it was our partners. If they want to restore the G8, let them do it. But I think everyone understands, today, and President Macron recently said publicly that the Western hegemony is ending. I cannot imagine any effective international organization without India or China.

Russia’s Far East: Then and Now

The development of the Russian Far Eastern Federal District has presented historical problems for Russia, even before the Bolshevik Revolution. Its remoteness and extreme climate have stymied most efforts at settlement and development for decades. Today, with a population of only 6 million, it is one of the most sparsely settled regions on Earth. Housing, health care, jobs, and education all are woefully inadequate. There was not even a highway connecting the region to the rest of Russia until the M58 was completed in 2010. Over the last 20 years, the population has continued to decline.

In his speech, President Putin was explicit that this dynamic must be reversed, that the region must be developed, and that all economic targets must be met. In that regard, Putin focused on the role of Russia’s space program and the potential for projects involving international partners in space exploration as key to the region’s future. 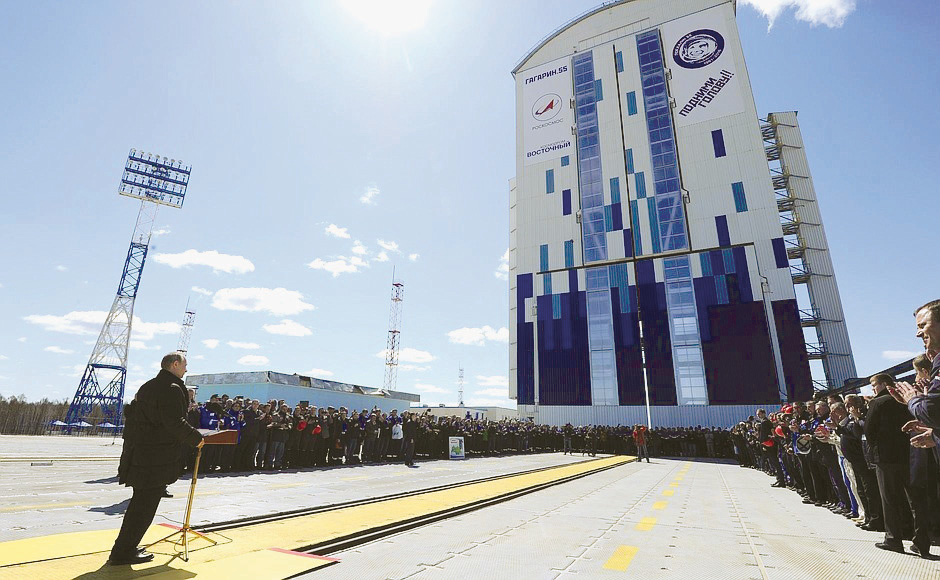 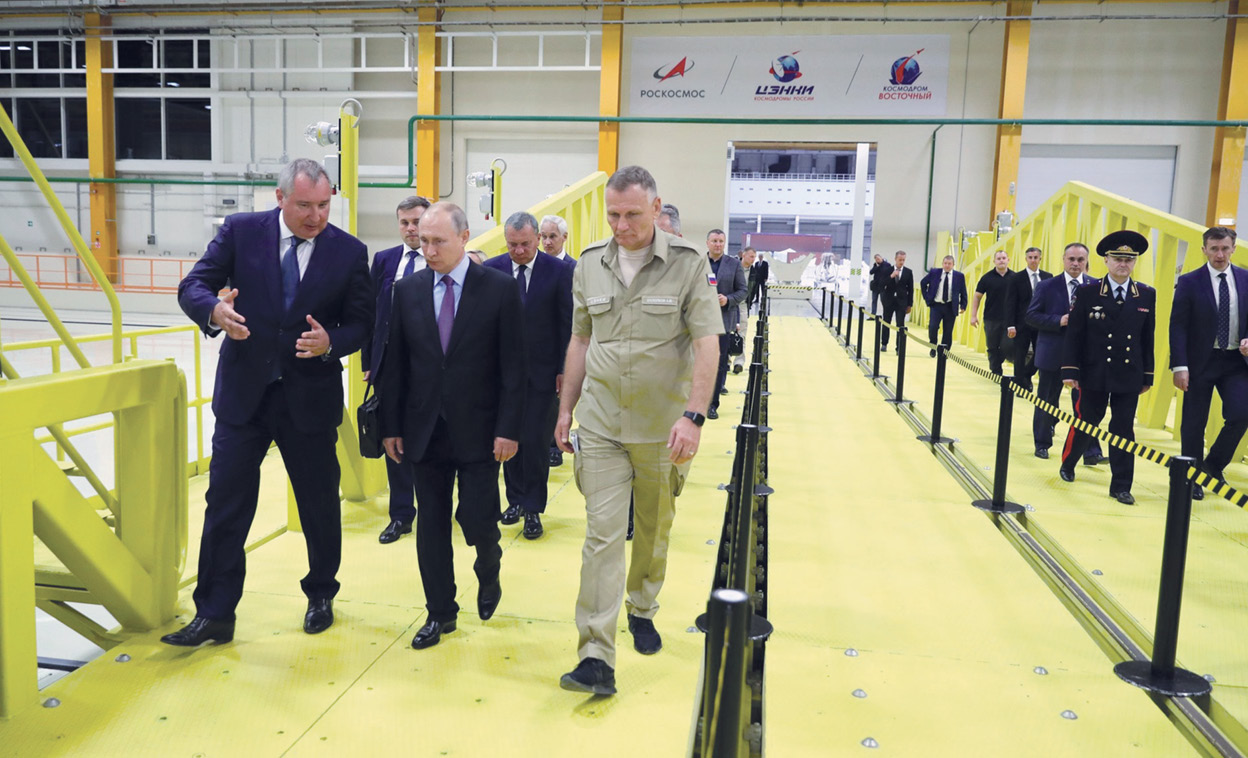 We securely conceal what we are still supposed to keep under wraps. At the same time, there is every opportunity for modern and cost-effective co-production arrangements.

The Space Launch Center is not a military space launch center. We’re now deciding who should build its next stages. To be honest, this space launch center should primarily handle civilian launches. Therefore we don’t believe that we can work there together only with foreign partners, but we are interested in this, and we will certainly involve them in this cooperation.

Russia and India implement joint space exploration projects, we work actively on these programs with the People’s Republic of China; in principle, we maintain good cooperation with the European Space Agency, and hope that this process will continue to develop, and we also cooperate with the United States. There are plans to launch many of them from the Vostochny Space Launch Center. Therefore, I don’t see any single direction that might be off limits to our foreign partners. On the contrary, we are interested in attracting them; this also concerns the Zvezda facility that you mentioned.

Prime Minister Modi and I visited Zvezda only yesterday. The facility will build modern large-capacity ships for operations on the continental shelf, in the Arctic zone and for carrying liquefied natural gas, petroleum products and other consignments. The Prime Minister and I had a discussion yesterday, and we will search for opportunities for joint work. Quite possibly, individual vessels will be partially built in Russia. Such international co-production arrangements are flourishing all over the world. Russia will build parts of vessels, and Indian shipyards will complete them.

Our famous leading company, Rosneft, that owns a major refinery in India, has recently bought a controlling stake in it. And its area of responsibility includes a major Indian port. Therefore we have many interdependent areas of cooperation. There are no closed subjects; on the contrary, we are interested in attracting our partners. 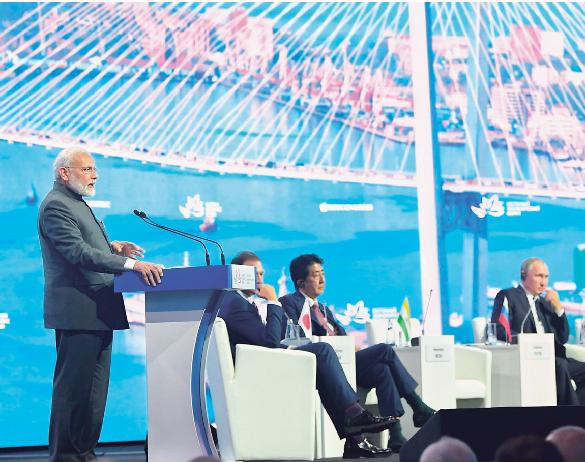 In addition to President Putin, the other leaders on the panel were President Battulga of Mongolia and Prime Ministers Narendra Modi of India, Abe Shinzo of Japan, and Mahathir bin Mohamad of Malaysia. This year’s honored guest at the Forum was Prime Minister Modi, who spent two active days in and near the city, visiting the immense Zvezda ship-building complex, and addressing the Forum’s plenary session. He stressed, in his address, India’s long historic friendship with Russia. As part of India’s “Act Far East” policy, he announced that India will provide a $1 billion line of credit to develop Russia’s Far East, a region twice the size of India.

Highlighting the new leading role of Asia in the 21st century, Modi pointed out that three quarters of Russia’s territory is in Asia. Russia’s vast Far East greatly needs population growth and immigration, for which it will require vast major infrastructure development. Amidst the current hysteria in the West, with the elites of the City of London and Wall Street promoting policies to halt industrial development and vastly reduce population numbers, Russia’s Far East, in fact, cries out for people, for energy, and for development. Some 50 agreements were signed between Russia and India, worth about $5 billion, in the fields of energy, mining, timber, education, and health.

Other important delegations participating in the EEF were from China, North Korea, and Italy. The large Chinese delegation of businessmen was led by State Council Vice-Premier Hu Chunhua, who emphasized the great potential for agricultural cooperation, especially in the field of soybean and soy oil exports to China, saying, “I would like to note that we have a big market, while Russia has significant production capacity. Therefore our cooperation is highly promising.” Hu visited soy fields and processing plants 98 miles north of Vladivostok.

EAEU Leadership To Meet in October

The initiatives for Eurasian economic development, elaborated by Putin, Modi, and others at Vladivostok, will be carried further at the upcoming October 1-2 meeting of the Eurasian Economic Union (EAEU), which will meet in Armenia. Putin and the other heads of state are expected to take part in the sessions in Yerevan, which will include a summit of the Supreme Economic Council of the EAEU. The member states of the Eurasian Economic Union are the Republic of Armenia, the Republic of Belarus, the Republic of Kazakhstan, the Kyrgyz Republic and the Russian Federation. At many points over the last two years, Putin has stressed support for the collaboration among the EAEU, the Shanghai Cooperation Organization (SCO), and the China-designed Belt and Road Initiative (BRI) for the best possible security and development of the “economic space” of the continent.

Of note at the upcoming Yerevan meeting is the EAEU Supreme Economic Council Summit, during which a vote on the nomination of Russian Academician Sergei Glazyev to lead the Macro-Economics and Integration Section will take place. Glazyev, who has served in many high-level positions in Moscow—most recently as Advisor to President Putin since 2012—is known for being a strong advocate of massive, directed national credits into the productive and big infrastructure sectors. He has also proposed severe restrictions on financial speculation, and for wresting control of the Russian Central Bank from the IMF-dictated policies of the Alexei Kudrin grouping in the Kremlin.

It is yet to be seen whether the shift of Glazyev from his post as Advisor to President Putin to the executive body of the EAEU will give him an enhanced position to advance “the accelerated economic growth goals set by the President of Russia,” as he characterized his mission, at a conference of Chinese and Russian economists, last year. 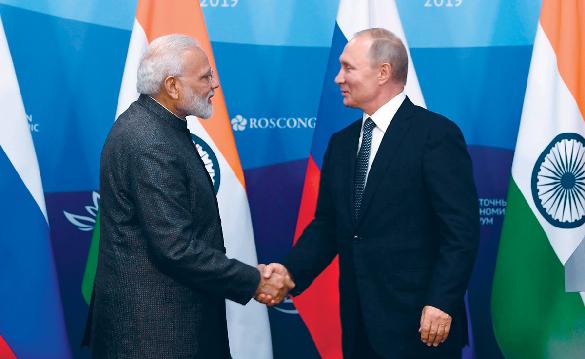 In recent speeches, President Putin has stressed in various ways the concept of nation-to-nation collaboration in developing the shared, vast “economic space” of Eurasia. The Siberian and Far Eastern areas are a world-class challenge for development, given the set of circumstances there, including the harsh northern climate, lack of infrastructure, and dramatic scarcity of people. But with its rich resources and strategic location, the prospects of development are exciting. Russia’s Arctic coastline borders the Northern Sea Route, where commercial shipping, and liquified natural gas shipments in particular, are already underway.

Developing this region was laid out extensively in the 2014 EIR Special Report, The New Silk Road Becomes the World Land-Bridge, which highlights the transportation, power, and infrastructure requirements. This is indicated in the map of rail routes—existing and proposed—based on a Russian Railways 2007 perspective, titled, “Strategy to 2030.” Over the past five years, certain key links and connections have been initiated. For example, by the end of this year, there will be the opening of the new rail and highway bridge across the Amur (Heilongjiang) River, connecting northeast China directly to Russia by rail, and for the first time, by superhighway.

This is the kind of connectivity awaiting development in many key areas, including the frontier of connecting Russia directly to the Americas, via a Bering Strait tunnel. The proposed Siberian rail line would proceed, from the Baikal-Amur mainline north through Yakutsk, on to Uelen, the small, easternmost coastal village in Chukotka. Once through the tunnel, the connection would proceed through Alaska and Canada, to the Lower 48 States and southward. On the U.S. side, the connecting rail line also remains to be built. This Asia-America Land-Bridge connection through the Bering Strait has long been proposed, including in recent times by former Alaska Governor Walter Hickel and statesman Lyndon LaRouche, both of whom presented papers on this to Russian conferences on international rail connectivity in 2007.

Connectivity for the vast Siberian gas deposits is under active development. The “Power of Siberia” gas pipeline, largely built, links the Yakutia fields with Primorsky Krai and various points in Russia, and as of 2017, into China. This connection to China is planned to go active by the end of this year. Another connection to China, the Altai Pipeline, has been considered, though not pursued, which would convey gas some 2,800 km from Western Siberia into Northwestern China.

In addition to hydrocarbons, the Far East is rich in timber, mineral resources, and even agricultural potential. For example, the genetics of soybeans have been improved to the degree that the crop can be successfully grown in far higher latitudes than ever before. This is happening in the Far Eastern Federal District, with Chinese, Japanese, and other investment, and can be dramatically increased.

The obvious constraint in all of these activities and plans is the lack of directed funding. In recent times, this has been directly related to the aversive environment of a U.S. and European foreign policy of sanctions against Russia. Commercial and institutional investment and involvement of any kind in projects and ventures—agriculture, transportation, manufacturing, and social services—are all absolutely deterred by the likelihood of being interrupted or even thwarted altogether, because of sanctions against some person or party associated with the deal.

Seen in this context, President Putin’s explicit talk of the necessity of the major powers collaborating to provide world leadership points the way to lifting the constraints and moving on to a new era of development.