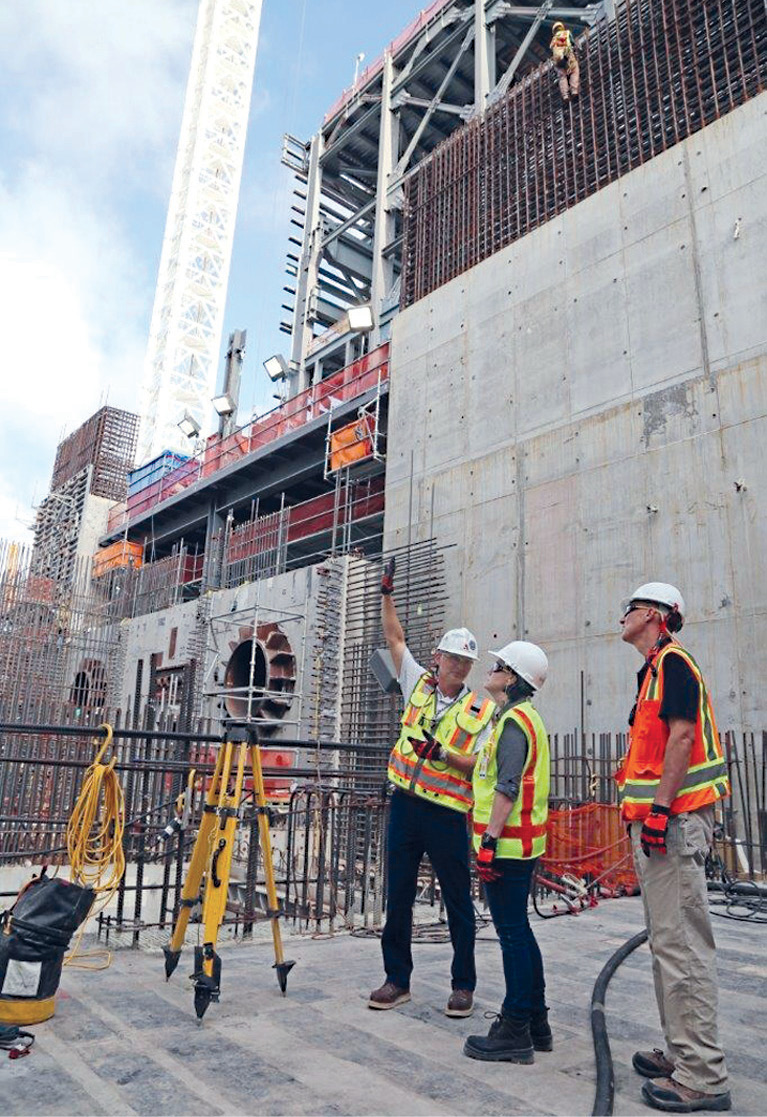 Sept. 9—Following the National Space Council’s discussion, at its Aug. 22 meeting, of the importance of nuclear power and propulsion for the Moon-to-Mars mission, the Department of Energy (DOE) on Aug. 28 released an outline of the ways in which it is supporting advanced nuclear reactors, fuels and concepts. The Trump Administration’s support has enabled construction of the first nuclear plant in more than three decades (Vogtle Units 3 and 4 in Georgia) to begin; but even more importantly, it is actively supporting 70 projects with some 50 private firms for new, small and micro nuclear designs, and related fuels. These are among the potential science and technology “drivers” for a revolution in economic productivity that will be led by crash programs in fusion energy and space exploration.

Nuclear power is that rare thing for which Sen. Elizabeth Warren and her fellow Democratic candidates don’t “have a plan”; but the DoE under Secretary Rick Perry describes itself as “all in” on nuclear progress. Deputy Secretary Dan Brouillette and Assistant Secretary for Nuclear Energy Dr. Rita Barawal both have long experience in nuclear power. The DoE’s involvement in three development areas seems particularly important.

Together with the Idaho National Laboratory (Dr. Baranwal was one of its directors), the Department of Energy has assisted in finally launching real testing, and soon, production of a small modular reactor (SMR) that will be a critical element of future civilian nuclear power worldwide, although it has not been produced yet anywhere. The 60-megawatt light-water reactor SMR design of Oregon-based NuScale Corporation, the NuScale Power Module, had passed, as of Sept. 1, the Acceptance Review phase and the Safety Evaluation Report phase of the Nuclear Regulatory Commission—a first for an SMR design-with only two open items remaining for the final review in 2020. The reactor modules are factory-built. Now begins the process of building and installing up to 12 modules (720 megawatts power in total) at the Idaho National Laboratory (INL). As they are installed during the mid-2020s, their power will be bought by a number of Idaho cooperative utilities, with one module used by INL itself.

This means that a commercially feasible contract is in place for a new, inherently safe nuclear plant design which can go anywhere in the world, serving limited electricity grids as they expand, serving power to a special institution like INL, greatly shortening the time from the start of fabrication to the first power connection, and producing working power in isolated regions—perhaps on the Moon?

All of the advanced reactor designs being pursued throughout the nuclear industry require the development of advanced nuclear fuels. DoE is supporting, with about $170 million thus far, the industry-wide push to develop what are called TRISO fuels—tri-structural isotropic particle fuel. These nuclear fuels are virtually indestructible, do not melt down under any conceivable reactor condition, and are easy to handle and load. Each seed-sized TRISO particle is made up of a uranium, carbon, and oxygen fuel kernel. The kernel is encapsulated in three layers of carbon and ceramic-based materials, which prevent the release of radioactive fission products. These TRISO particles can be fabricated into cylindrical pellets or billiard ball-sized spheres called “pebbles” for use in reactors cooled, not by water, but by gas. This will allow the reactors to operate even more efficiently and safely at significantly higher temperatures, and to be used for applications such as water desalination and hydrogen fuel production.

The uranium for such advanced fuels must be what is called high-assay, low-enriched uranium. DoE says the nuclear industry will need 600 metric tonnes of it by 2030 and is assisting the development of 16 advanced centrifuges to demonstrate the fuel production, according to its Aug. 28 statement.

Withstanding fluxes of high-energy neutrons is a critical question for magnetic confinement fusion power reactors, at least until such damaging fluxes can be effectively eliminated in fusion reactions based on the use helium-3 for fuel, which is vanishingly rare on Earth, but plentiful in the surface layer of the Moon. The Energy Department and the White House have, since early 2017, considered fusion power reactors as a necessary development in the field of advanced nuclear reactor designs. Congress passed legislation, at the urging of the DoE—with White House support—that enabled the Nuclear Regulatory Commission to conduct its reviews of new reactor designs more quickly, and that explicitly included reviews of fusion power reactor designs.

The development of SMRs during the same decade of the 2020s in which the Project Artemis Moon-to-Mars mission will be expanding, brings up the clear need, recognized in the space community, to use small reactors as the source of working power for the development of a human lunar settlement. The Energy Department brought the Transient Reactor Test Facility on line at INL in 2017. According to the DoE’s Aug. 28 statement, “The facility will also perform important tests for the National Aeronautics and Space Administration (NASA) as it develops nuclear fuel for space exploration, including next-generation nuclear thermal propulsion.”

The 60-megawatt NuScale Power Module, and other SMRs which may soon follow, still weigh more than could possibly be transported to, or landed on the Moon, in the coming decade. The Energy Department says that it is working with the Defense Department “to demonstrate and deploy ‘microreactors’ as early as 2023.” These will be small enough to transport in a truck. They obviously will also be able to support isolated facilities, from military bases to hospitals, and otherwise to power “microgrids” for certain locations which, at least temporarily, will only host limited-scale productive activity and housing. These microreactors will be produced in factories as modules that can work together as the demand for electric power in the limited grid grows. This well describes the use of nuclear power as an essential prerequisite for developing the first human settlement on the Moon. Consider powering more than 2,000 living units on the Moon with a power source that sits in a truck. Contrast that to the solar farm in Kings Park, New York, which powers 1,000 homes but consumes 27 acres.

Otherwise, $125 million has recently been authorized for Fiscal Year 2020 for DoE and NASA to work on the development of truly miniaturized nuclear-thermal propulsion reactors that will propel rockets in space flight. This prospect was discussed at the Space Council meeting Aug. 22 by a representative of BWX Technologies, who estimated that nuclear-propelled rockets could make the trip from the Moon to Mars—when Mars is closest to the Earth—in three-four months.

However, for travel to Mars, fusion power for propulsion is absolutely necessary. The trip to Mars would then be a matter of days or a week or so, enabling the travelers to travel safely and arrive in good strength and health.

The Trump White House promoted legislation that passed in early 2017 and had an equal focus on fusion reactor designs, but did not request or assign funding, concentrating only on faster and better testing and approval of designs by the DoE’s Nuclear Regulatory Commission. In recent weeks, state elected officials in Louisiana and New Jersey have called for expanded Federal investment to achieve a fusion breakthrough. Louisiana State Sen. Conrad Appel called on Aug. 23 for a Federal crash fusion power program like President Kennedy’s Apollo Project.

New Jersey is a significant center for fusion experimentation by private firms—the U.S. public fusion program has shrunk almost to insignificance. There, State Sen. Joseph Pennacchio on Sept. 9 introduced a package of five bills to expand New Jersey’s support for these private fusion experiments, including establishing a New Jersey Fusion Technology Industry Commission, and a sixth bill that memorializes Congress to increase fusion funding, citing South Korea, China and other nations which are currently doing much more and producing experimental breakthroughs. 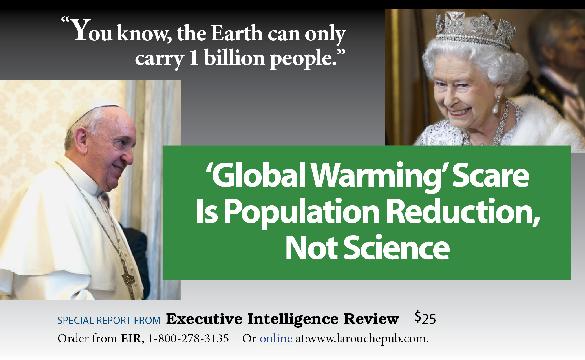 Buy 'Global Warming Scare' Is Population Reduction, Not Science from the EIR store