This article appears in the September 20, 2019 issue of Executive Intelligence Review.

Youth on Seven Continents Are Called To Arms Around Scientific Optimism 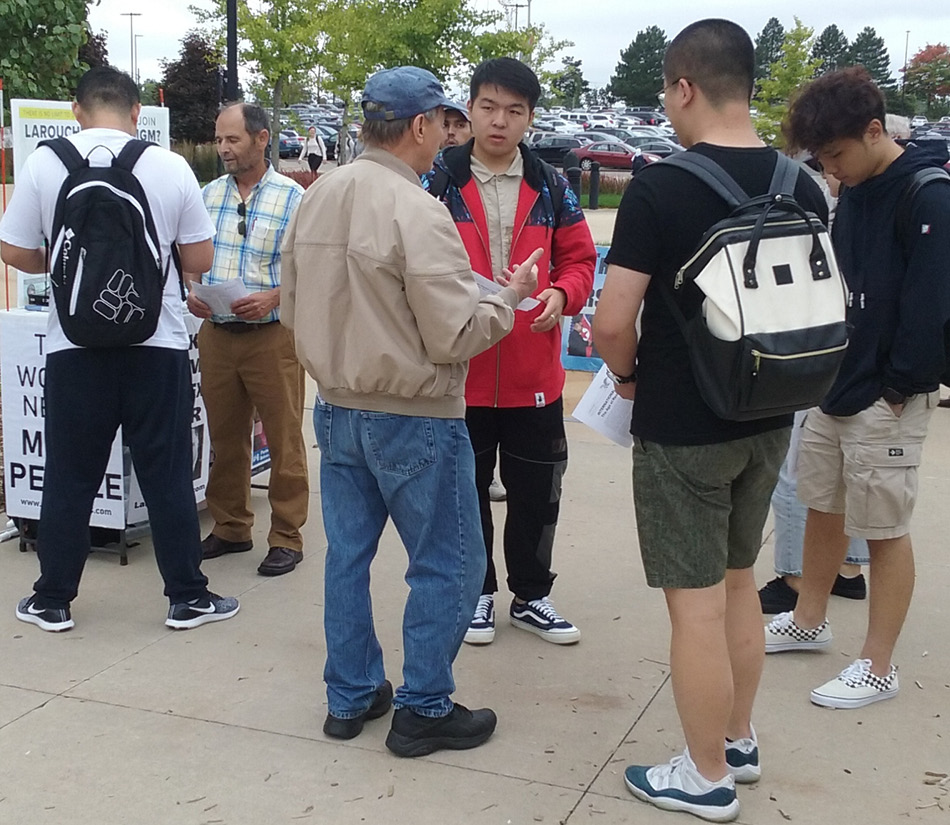 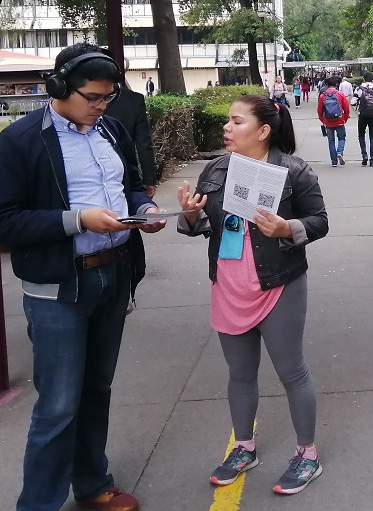 Sept. 14—The Schiller Institute’s international Days of Action around Helga Zepp-LaRouche’s “International Call to Youth: The Age of Reason Is in the Stars!” swept the planet on Sept. 10-12, with coordinated organizing on all seven continents on planet Earth: from Dresden to Detroit, from Mexico City to Johannesburg, from Melbourne to Manila—and by email to scientists working on an Argentine research base in Antarctica! With a single voice, humanity’s future is demanding a return to a concept of Man premised on the dignity of being a creative being, who sees and makes his own future in the stars.

In one sense, the call to arms for the Sept. 10-12 Days of Action was issued by Lyndon LaRouche . . . thirty-two years ago! Speaking to an audience of nearly 500 Peruvians gathered in Lima at a Schiller Institute conference on April 4, 1987, LaRouche stated:

If we get through the present international financial crisis, the Mars-colonization project will be implemented by the United States, with the participation of other nations. If that project is funded, it will determine the kinds of changes which will occur on every part of Earth for the next 50 and more years to come.

What kind of a world will we build to be enjoyed by the grandchildren of the younger people in this audience today? . . . Never accept the idea that some countries are rich, and other countries are poor. . . . Never think of yourself as a person from a poor country. I have asked you to turn your eyes up to the stars, to see, with pride and confidence, what your mind is capable of enabling you to accomplish. Your dreaming that dream of the stars, is your nation’s potential; your nation’s potential is its future reality. . . . Never accept the sight of human misery; human misery is unnecessary. Never accept the idea that the world is in danger of being overpopulated by anything except a surplus of diseases and Malthusians.

The same vision of, and mission for, humanity that Lyndon LaRouche posed so poetically thirty-two years ago in Lima, was restated by his widow, Helga Zepp-LaRouche, in her International Call to Youth, which has been translated into nine languages and distributed by the thousands as a leaflet in close to 50 cities worldwide, and circulated electronically even more broadly, as the centerpiece of the international mobilization:

Man is capable of reason and therefore of limitless intellectual and moral perfectibility!

The great thing about space travel is that it proves that we are not living in a closed system in which raw materials are limited and the murderous views of Thomas Malthus, Julian Huxley, Bertrand Russell, and Prince Philip are correct . . .

It would mean that developing countries would have no prospects for ever escaping poverty, hunger, epidemics and a shortened lifespan; it would be genocide of an unimaginably large number of people! 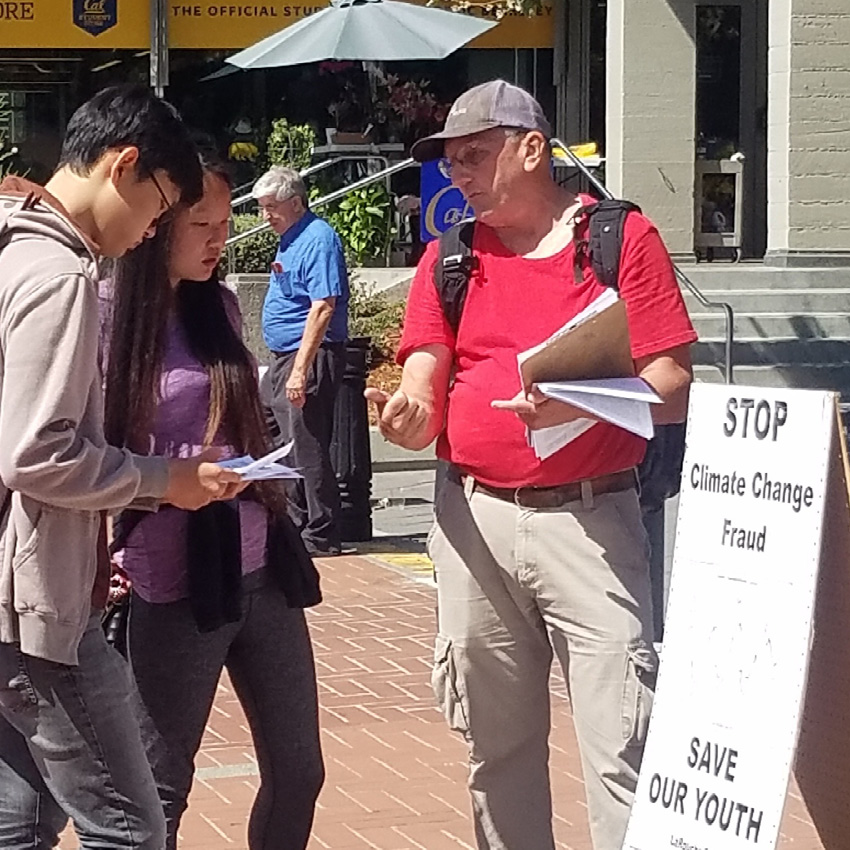 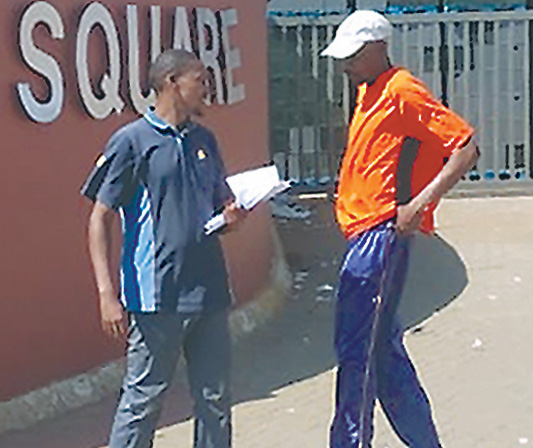 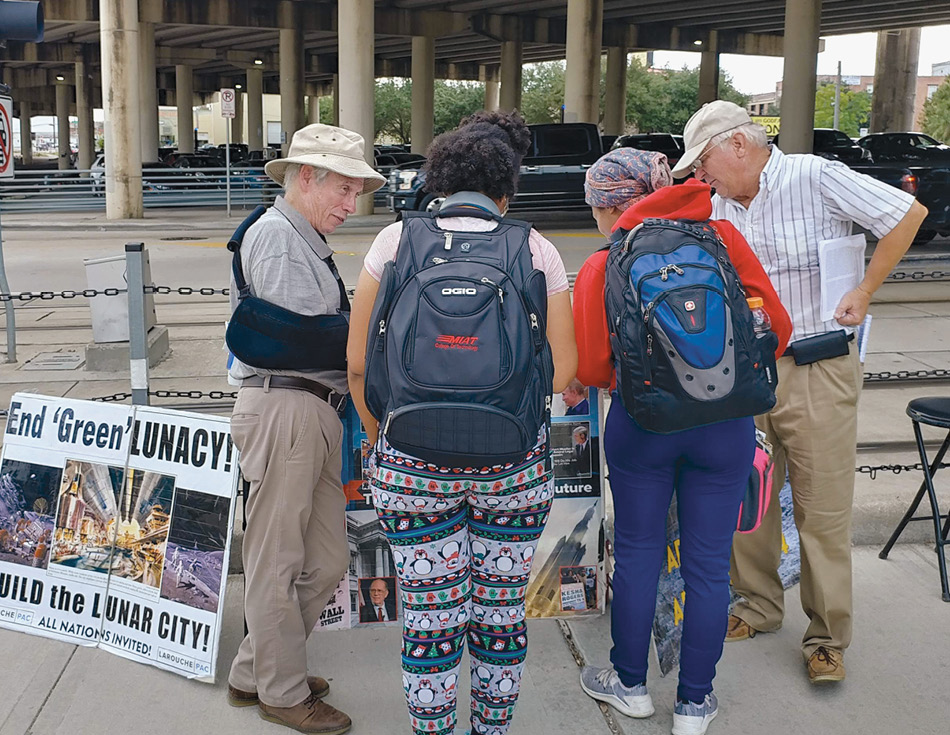 LaRouche movement organizers reporting from nearly every deployment on every continent found large numbers of youth wide open to discussing fundamental scientific and moral issues regarding Man’s future in the universe, and whether or not our species is in fact doomed by exhausting his own resource base and by destroying the environment—as the barrage of “greenie” environmentalist propaganda has tried to convince us. Everywhere that the controlled environment of politically-correct “green-think” and induced pessimism was broken with a discussion of actual science and morality, many youth responded with natural inquisitiveness and optimism.

As one engaged student at the University of Michigan put it, in the middle of a discussion with a LaRouche organizer:

Why didn’t you say at the beginning that LaRouche refuted the limits to growth idea! I didn’t know that anybody had even done that. I’m interested in hearing that!

Halfway around the globe in Melbourne, Australia, organizers reported that a hysterical “greenie” provocateur came up to a literature table at Melbourne University intent on disrupting an intense discussion with a student “who was deeply engrossed in our analysis of the next imminent economic crisis and very concerned about what to do about it.” The student interrupted the provocateur’s efforts to fear-monger about supposed man-made climate change: “I don’t care about that! Don’t interrupt!”

At the University of Houston, Schiller Institute organizers reported that “the response was surprising: curiosity, engaging, and amazingly open to leaving their names for follow-up and activation of some sort.” About 500 leaflets were distributed, hundreds of students were spoken to, and 50 contacts were made. 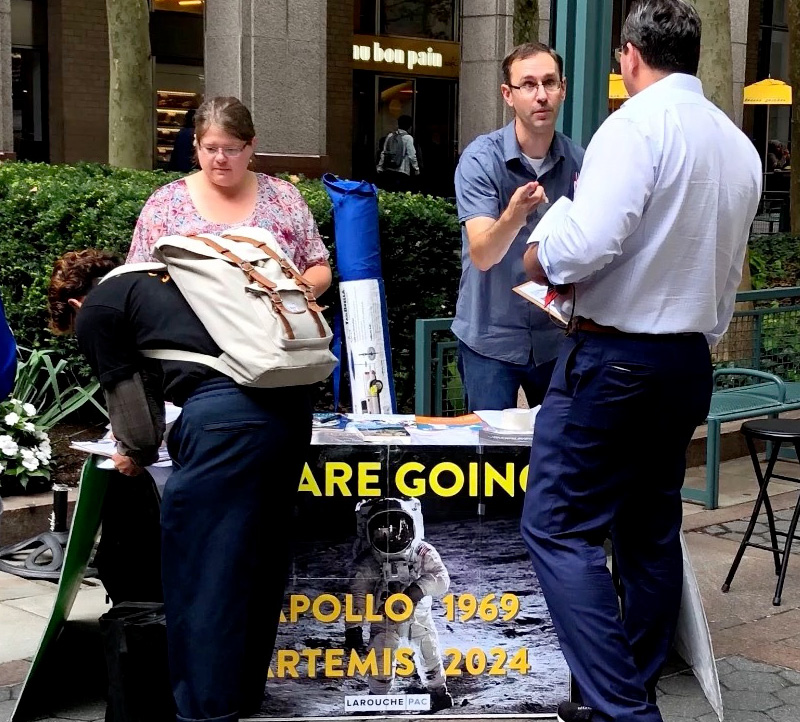 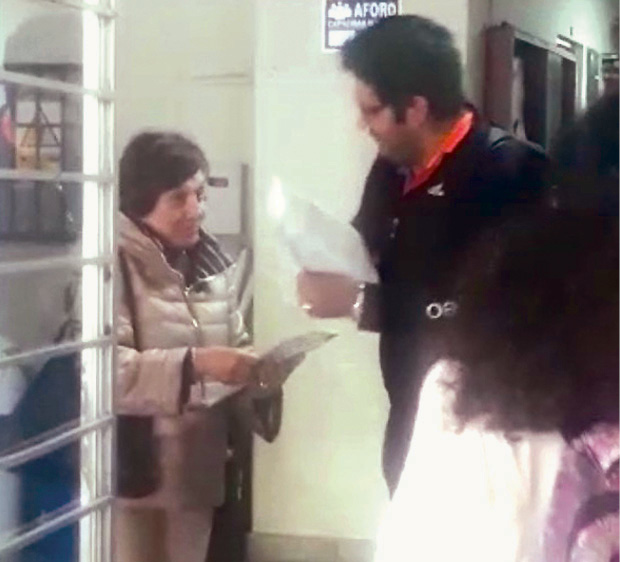 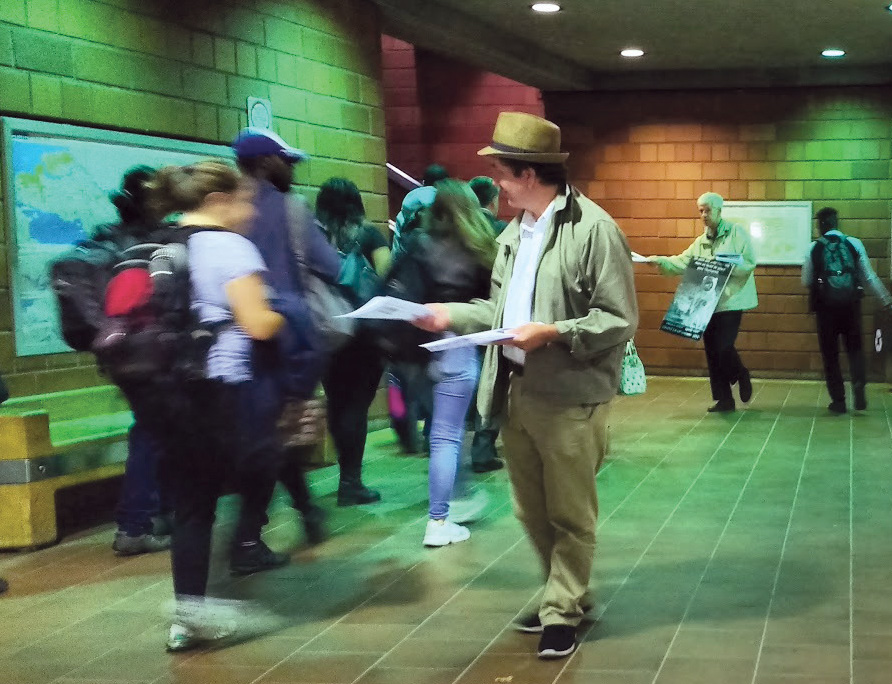 At the University of Sonora in Hermosillo, Mexico, a team of veteran organizers distributed some 400 leaflets and spoke to dozens of students, reporting:

We found a radical change in how the students are thinking, with students very tuned into the big changes going on around the world: China’s development; prospects of China, Russia and India working together; and President Trump throwing war-mongering John Bolton out of his administration. We keyed our briefings around building the upcoming Sept. 26 international Spanish-language webcast on LaRouche’s Moon-Mars mission, and on how Mexico had to join in the conquest of space and nuclear energy or there won’t be any economic recovery. “The whole world wants to go the Moon now. What do you think about that?” we asked. “Fantastic!” was one student’s response.

The LaRouche PAC-endorsed candidate from New Jersey for U.S. Senate, Daniel Burke, led squads of young organizers on numerous campuses in New York and New Jersey, where they confronted the green ideology head-on, organizing students to join them at the United Nations in New York City, to counter the Malthusian pessimism promoted by the UN Climate Action Summit beginning Sept. 23, which will feature media star Greta Thunberg.

Particularly moving was the video-taped message sent by Fouad and Ali Al-Ghaffari of Yemen:

Fouad: From Sana’a, the capital of Yemen, and in defiance of the war of aggression and blockade, and in the spirit of our National Vision 2030, we confirm our support to the call to international youth issued by Mrs. Helga Zepp-LaRouche, Chairwoman of the Schiller Institute.

Ali: We salute you Mrs. LaRouche from the capital of perseverance, and salute all other youth who have responded to your call. We join our voice to your voice and theirs!

Fouad: We stand here today in support of Helga’s call, and to prove to the world that our country is part of this campaign and preserves its place despite all hardships, and to make our youth participate with other youth of the world in playing a creative and constructive role in the future of mankind and march of civilization.

Ali: Yes, the Age of Reason is in the stars! And our hands are stretched out to all other youth around the world to build a better future for us all, both here on planet Earth and in space. 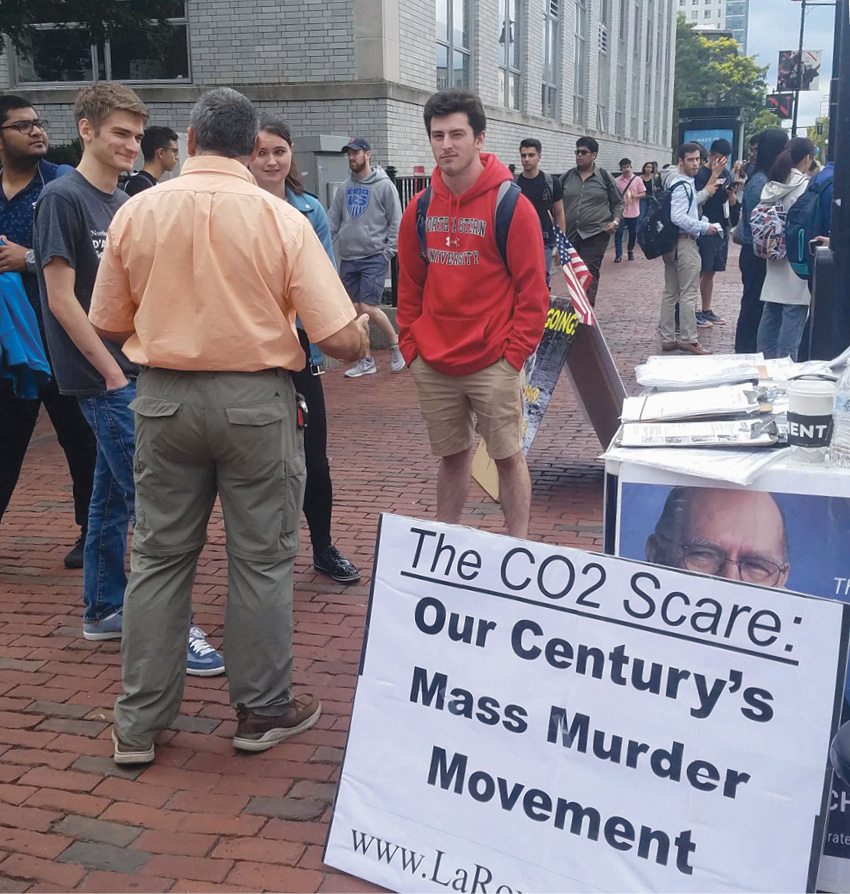 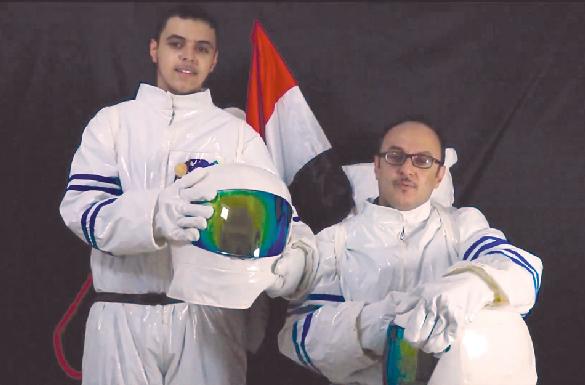 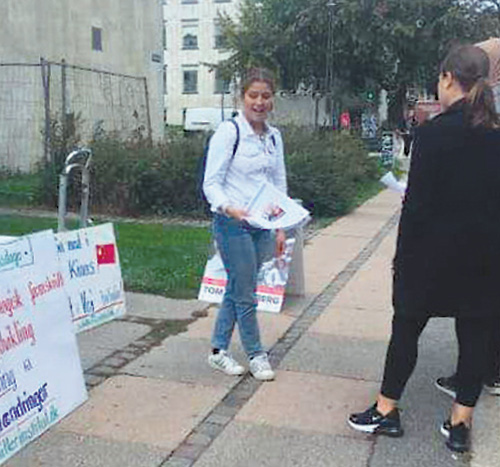 To Educate a President, Build a Youth Movement

The Schiller Institute’s world-wide activities were carried out just as India achieved its stunning success with its Chandrayaan-2 lunar mission, which brought pride and optimism not only to that nation of 1.3 billion people, but to (especially) the youth of the entire planet: optimism that they do have a future, and that it lies in the stars.

Also coincident with the Days of Action was President Donald Trump’s scathing firing of National Security Adviser John Bolton, an arrogantly opinionated defender of the British Empire’s old order of scarcity and wars. By so doing, President Trump has demonstrated once again his ability to turn on a dime and correct course when needed—a quality which has put him high on London’s “this-man-must-be-stopped” list.

NASA Administrator Jim Bridenstine’s public exchange with long-time LaRouche movement leader Kesha Rogers (see transcript, page 16 in this issue of EIR) served to underscore the potential in the United States to exonerate LaRouche and his ideas, and adopt his policies, which the British so fear.

Like India, Russia, and China’s space exploration activities, Trump’s Artemis Moon-Mars project is an encouraging step in the direction of an actually viable Moon-Mars mission, as designed by Lyndon LaRouche. Such a mission requires not only international cooperation on fusion-based propulsion to get to Mars and back safely, but more fundamentally, a thorough-going rejection of the Malthusian premises and attendant bestial concept of Man—that LaRouche’s science of physical economy alone systematically refutes.

It is for that reason that the actual mission of the Schiller Institute’s Days of Action is perhaps best summed up by the report of a professor in the Mexican City of Querétaro after a day’s organizing activities on his campus:

We managed to awaken a sense of optimism in the youth, despite the fact that the virus of environmentalism had them in a state of pessimism. The antidote or vaccine for that is that we are able to conquer space, along with Vladimir Vernadsky’s idea of the noösphere and the ideas of Lyndon LaRouche. This is the beginning of organizing a new generation of youth who will help us extend the legacy of the ideas of Lyndon H. LaRouche.

And, as LaRouche himself demonstrated over five decades of organizing in dozens of countries around the world: If you want to educate a President, build a youth movement.

Days of Action on Seven Continents 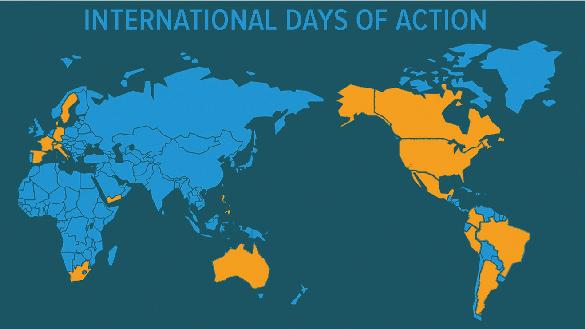