Peace Through the Advantage of the Other

The following speech was presented on September 15 at an international conference sponsored by the World Philosophic Forum—Philippines at the Century Park Hotel in Manila. The Chairman of WPF—Philippines, Shariff Ibrahim Albani, and the international President of the WPF, Professor Igor I. Kondrashin of Russia, also spoke at the conference, which was attended by more than 1,000 people from 37 countries. The speech can be watched here.

I cannot overemphasize the strategic value of an international conference of this nature and composition. Conventions of various kinds organized by groups and associations continue to be held all over the world, but to my humble knowledge, none has been convened of this nature and purpose. It is not organized by any religious organizations, yet it is full of spirituality. It is not organized by any political and ideological group, yet it addresses the concern of the whole world’s population. And that the conference is held here in the Philippines is indicative that the sovereignty of all nations, large or small, rich or poor, is a recognized principle. 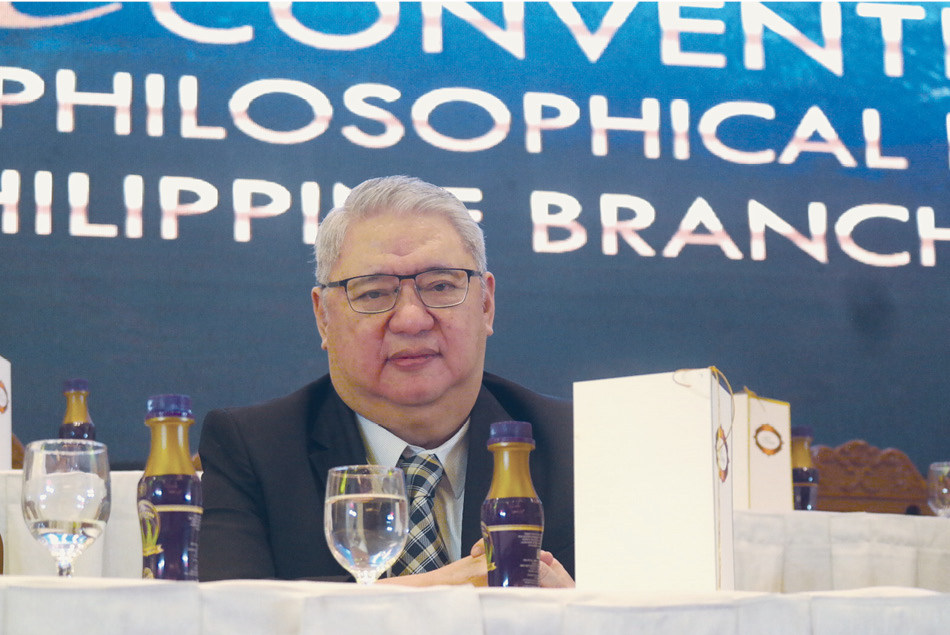 Current political and economic crises now confront our world: the Middle East conflicts (Syria, Afghanistan, Libya, Iran, the Israeli-Palestine impasse); South American economies (Venezuela, Argentina, Brazil); the Korean Peninsula; and territorial tensions (South China Sea/West Philippine Sea) have risen to unprecedented, historic levels, threatening global conflict which could very well annihilate present civilization. Thirty thousand or more nuclear warheads in the possession of the superpowers, at 20 megatons each, are ready to be unleashed in a war of total destruction, with the capability of killing the world’s population 20 times over. While the hegemony of western powers is seen to be waning, their control over the world’s monetary system collapsing, and their economies in a process of collapse, the United States, UK, France, Germany and their allies have asserted themselves militarily in various regional theaters.

The U.S. pivot of 60% of its mighty naval power to Southeast Asia, with the Philippines right at the center, has heightened a general apprehension not only among our people, but the people of all Southeast Asian nations, and China.

The causes of conflict have not changed over the history of mankind. Man, motivated by power and greed, tries to control and overpower his fellow man—revolutions by the oppressed to change the oppressors—resulting in local, regional, and world wars. 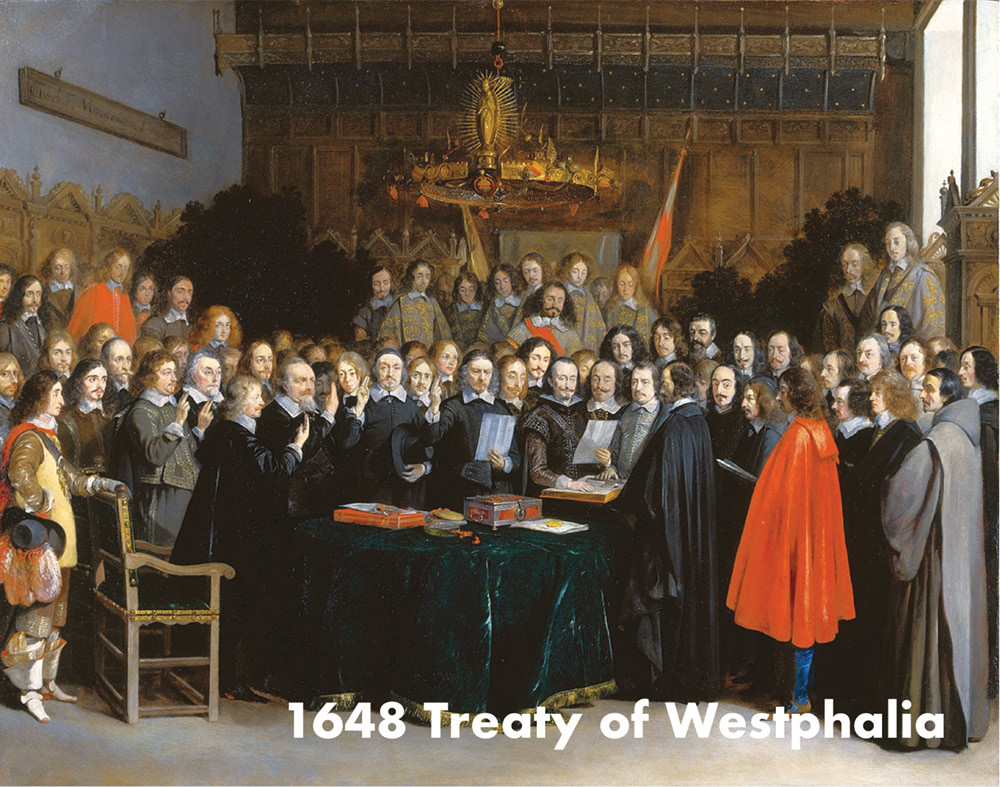 Peace via the Advantage of the Other

The strategic question confronting us today, with civilization as a whole threatened with extinction, is: If we want to create a new world order of peace and development to ensure survival and prosperity for all nations, how do we achieve that peace?

An important, historic precedent is the Peace of Westphalia after the Thirty Years War, which ended in 1648. It was a war that rampaged Europe in waves, vicious and violent, for 30 years, involving many countries, including Germany, Austria (Hapsburg), Hungary, France, Sweden, Czechia (Bohemia), Denmark, Spain, and the Netherlands.

The Peace of Westphalia, when all the warring parties finally came together, was the first time that a European community of sovereign states was established. And it was only possible because all of its members recognized each other as having equal legal standing, and guaranteed each other their independence.

It was clear that this not only required good will, but a minimum of efficient guarantees. Most important, was the idea that the raison d’étre—the reason for its existence, the identity of this new alliance—of this community of states, could never be only for self-preservation. It would be morally justified only if it realized ideas and principles which had a higher unifying purpose than just the survival of the states themselves.

Such principles exist in the treaties of 1648. Some were expressed for the first time in history. These negotiations lasted for four years, 1644-48, and in the end, Protestants, Catholics, monarchies, and republican forms of government were treated as having equal status in negotiations and in the treaty.

The peace treaty defined the principles of sovereignty and equality in numerous subcontracts, and in this way became the constitution of the new system of states. 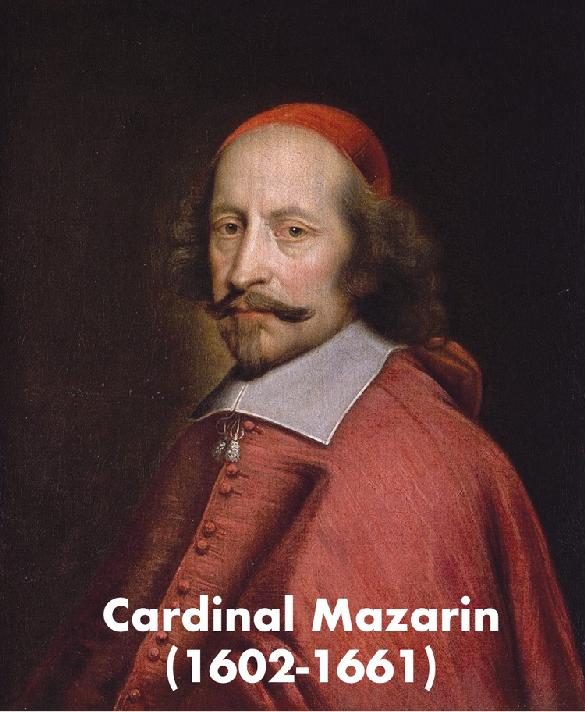 Cardinal Jules Mazarin, as the leader of France, the ascendant nation among others, is credited with initiating the move towards peace. The guarantees of independence, recognition of sovereignty, the cessation of hostilities, and forgiveness of damages done to lives and properties, were the result of the principle laid down by the leaders of these nations. To paraphrase a portion of the historic document, Article I of the peace treaty states:

And this Peace must be so honest and seriously guarded and nourished that each part furthers the advantage, honor, and benefit of the other, and that both forms, from the side of the entire Roman Reich [Holy Roman Empire] with the Kingdom of France, as well as the other way around, from the Kingdom of France with the Roman Reich. A faithful neighborhood should be renewed and flourish for peace and friendship, and flourish again.

This is a very precious idea. It is essential to have peace. It is the idea of Nicolaus of Cusa, which he had in the 15th century, that peace in the microcosm is only possible when you have the development of all microcosms. You can only have peace among different nations if each nation develops itself fully, and regards as its self-interest the development the others fully, and vice-versa.

The Treaty of the Peace of Westphalia states that peace is the highest goal of the community states. It was the first time such a framework was created different from the principle of the limitless right of the victorious party—that might is right. This was a gigantic step forward in international law, where might is not right—and the stronger should not necessarily prevail.

The present, ongoing dispute here in Southeast Asia, particularly over the South China Sea/West Philippine Sea, is a case which, I believe, may find resolution along the principles I have described above. Ideally, Philippine President Rodrigo Duterte may consider convening the ten ASEAN member countries to propose to all countries involved, the very principles which have found acceptance in Europe in the 1648 Treaty of Westphalia.

1. China and the ten member-nations of the ASEAN convene and sign a non-aggression treaty, committing to mutually beneficial agreements of exploiting the resources of the disputed waters;

2. Guarantee the freedom of navigation to all commercial and military vessels intending to use the strait of Malacca, going to or coming from their respective ports;

3. Encourage the construction of the Kra Canal in Thailand in order to de-congest Malacca strait and provide all with an alternative route for benefit of all nations;

5. China and ASEAN propose assistance to the United States in rebuilding its infrastructure requirements especially a network of fast rail systems, and make an accommodation to fair trade for mutual benefit.

No less than the renowned philosopher Gottfried Wilhelm Leibniz, in his Ethics, Law, and Civilization (1693), in reference to the principles of the Peace of Westphalia, wrote:

Charity is universal benevolence, and benevolence is the habit of loving. Moreover, to love is to take delight in the happiness of another, or, what amounts to the same thing, it is to regard another’s happiness as one’s own.

We all must realize that the China Sea dispute is not merely a Philippines/China problem—it in fact has global security implications, just as do many other regional disputes.

It is not enough that a treaty be signed by the parties without efficient assurances that all will abide. It is also difficult to enforce where leaders change and so may their motivations. But what will bind the countries more, must necessarily include the beneficial effect on all their populations—an economic order which ensures development and prosperity for all.

Working towards peace in Europe during the 17th century, Cardinal Mazarin and Jean Baptiste Colbert closely studied the river systems with the end in view of enhancing commerce and economic activity between northern and southern Europe. The rivers Rhine, Vistula, Oder, Elbe, Weser, and Ems were being used as territorial boundaries—instead they sought to make them economic corridors—to enhance development and communication.

Mazarin understood that peace among nations must necessarily include a collaboration towards prosperity for all, if it is to last. 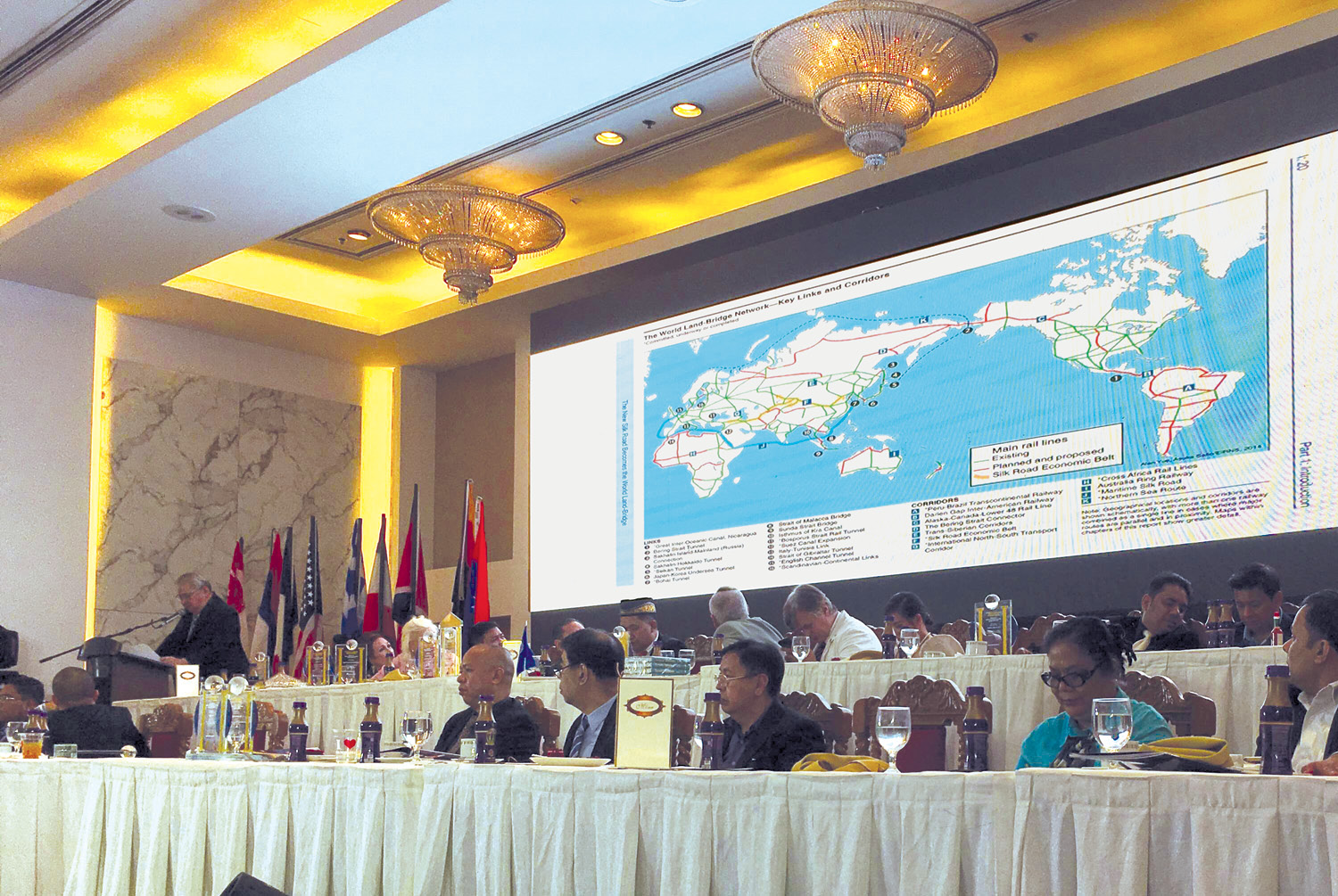 Today, what better manifestation of this principle can be understood in the promotion of our historic effort by man, now committed to by no less than 130 countries, to implement the One Belt One Road project, now known as the Belt and Road Initiative which aims to construct economic corridors of high-tech, fast rail systems to connect all seven continents of the world by land. We will soon be able to travel around the world by land, transport cargo by land on a transportation system which travels up to 1,000 miles per hour. The impact on world commerce of this facility is obvious.

Another great historical project of this century—an ongoing project—that continues to give us hope, and has conjoined all the superpowers, is the Moon-Mars Project. The United States, China, Russia, India, and including Japan, France, and Germany, are collaborating in plans to land a team of astronaut-engineers and scientists on the Moon, construct a base-station there, and from that base-station launch another team to land on Mars. The stated Moon landing goal is 2024—it’s highly possible that before the decade is over man will be well on its way towards realizing a collective effort in making another giant leap for mankind—the colonization of Mars.

Then, as now, mankind is at a crossroads. One path leads to war, despair and destruction. The other leads to hope, prosperity and development for coming generations.

With the powers given to us by our Creator, there are no limits to growth. As history has taught us, if we are motivated by the common good, and act benevolently to the advantage of the other, we will learn to use our rivers and our oceans, and even outer space, not as territorial boundaries, but rather as corridors of commerce, and economic and scientific activity to enhance the quality of life of all human beings on this planet.

It is my fervent hope that we citizens of the world, patriots of our countries, use this defining, historic moment to make the spark that ignites the spirit of a new world renaissance.

Antonio Valdes founded, and leads, the Philippine LaRouche Society, and also founded the Katipunan ng Demokratikong Pilipino (Philippine Democratic Party) in 2018, and led a slate of candidates for the Senate in the 2019 election. A former Undersecretary in the Department of Education, Valdes has been a leading voice in the Philippines for international cooperation in the Belt and Road Initiative, for nuclear power, and for Lyndon LaRouche’s Four Laws and New Bretton Woods. Valdes hosts a radio show every Sunday night, on DZXL 558, available live on the internet at 7:00 p.m. Manila time.