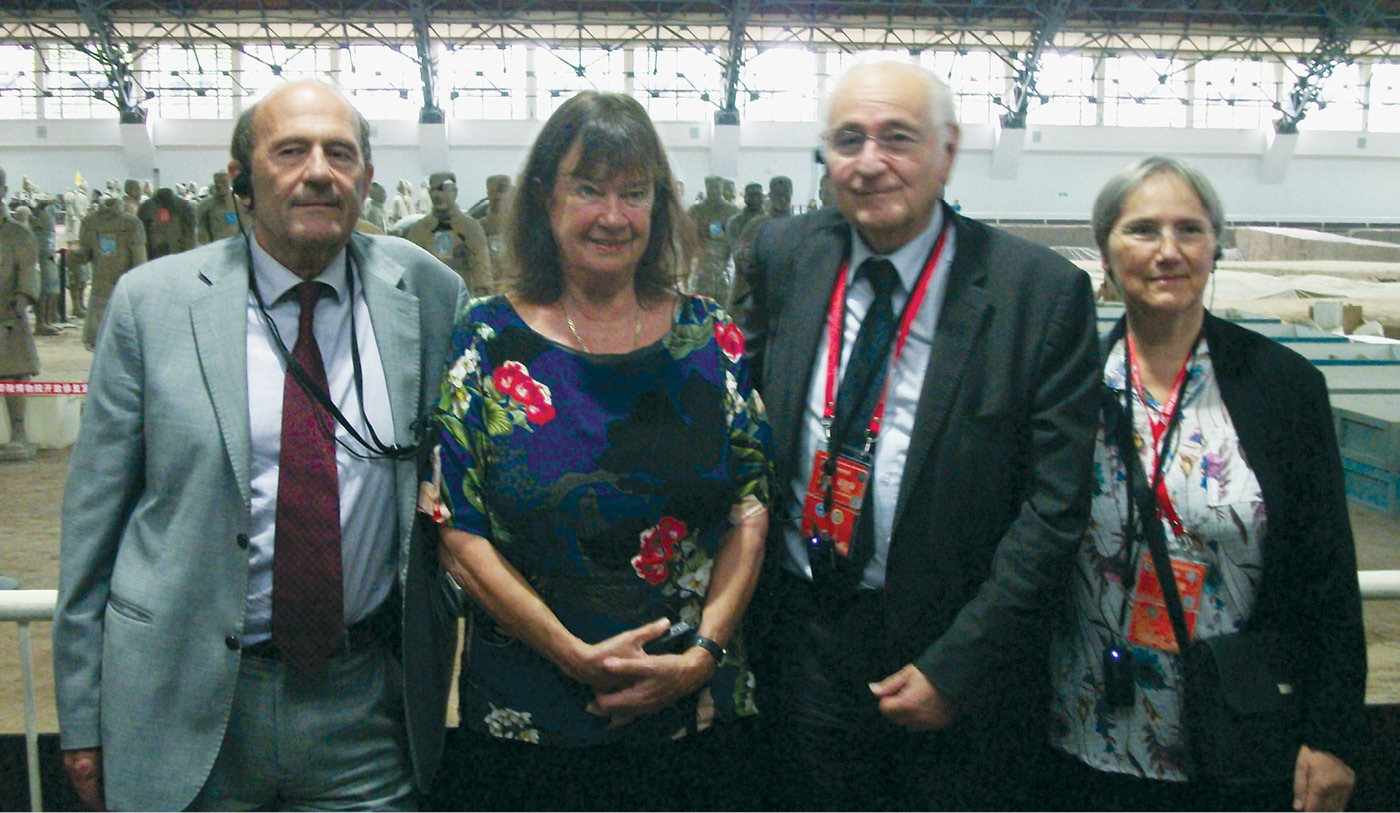 Jacques Cheminade is the President of the French political party, Solidarité & Progrès. This is the edited transcript of his presentation to the 2019 Euro-Asia Economic Forum, Think-Tank Meeting, which took place in historic Xi’an, China, bringing together over 1,000 people, representing more than 58 nations from Europe and Asia, for two days of presentations and discussion, September 10-11. Helga Zepp-LaRouche’s keynote to the Forum’s Think-Tank Meeting appears in the September 20, 2019 issue of EIR.

Historically, many philosophers, politicians, economists and, more generally, humanists have tried to create an organized architecture of cooperation among Europe, Eurasia and China. All were inspired by the need to share the best of their cultures for a common development, to inspire creativity and innovation along the way as the necessary basis for world peace. We owe it to all of them from the past—and let me mention here Leibniz’s 17th-century Novissima sinica—to accomplish their dreams. At the same time, with the same impulse, we owe it to the coming generations of our respective countries to take up this humanist challenge for a much better future.

We all know that we have reached a point of great emergency, with a world financial system doomed to crash, if it does not change, and the surge of trade and technology wars threatening to degenerate into cold and even possibly nuclear wars, if nothing crucial is undertaken to prevent them. In that dramatic context, it is undeniable that the only worldwide project which promotes cooperation and exchanges among the main civilizations, both concrete and forward looking, is the Belt and Road Initiative (BRI). This Silk Road Economic Belt is now interfaced with the Eurasian Economic Union project. This represents a group of more than a 150 countries and organizations in Asia, Europe, Africa, the Middle East and the Americas. 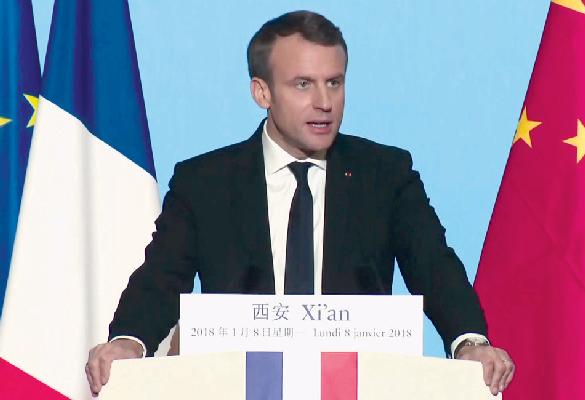 There are more and more voices in Western Europe which have begun to understand that it is obviously the alternative to a failed Western financial system. Our future, as President Xi Jinping has expressed it so many times, is that of a win-win new order based on inclusivity, connectivity and interactivity. French President Emmanuel Macron, in his recent speech to the French ambassadors, recognized that the world has changed, and a new, audacious spirit has to prevail in relations among nations. When he was in Xi’an, here, at the beginning of January 2018, he called for “a fair multilateralism” and stressed that “the New Silk Road reactivates the concept of civilization in the domain of the imagination, a concept to be shared.”

If we want such declarations to go beyond the level of words, we have to take bold initiatives, concretely and immediately. I would like China and Europe, China and France, to work together in all areas of technological innovation at a faster pace. I would like all European countries to understand that the Chinese Thirteenth Plan and the vision of Made in China 2025 are in our common interest.

The Advantage of the Other

To transform China into a global manufacturing leader, to become a high-end producer of goods and “a major world power in scientific and technological innovation by 2050,” should not be seen as some sort of undue competition but as a contribution to our common international development.

To say it bluntly, the present policy of the United States, which, towards China, unfortunately is more in the British imperial tradition, and the hypocritical behavior of the European Commission, rather obsessed by “rivalry” and not by cooperation, are exactly the opposite of what the world needs.

True, we need in Europe a common policy of investments that will define our future, but not in order to confront any other country. On the contrary, we need a common policy to create the conditions of “understanding, coexistence and cooperation,” as once defined by General de Gaulle, when he said in January 1964: “It is not excluded that China will become again, in the next century, what it was during so many centuries, the main power in the universe.” It is today. 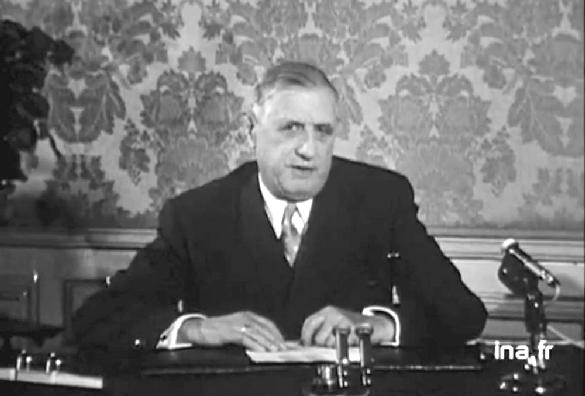 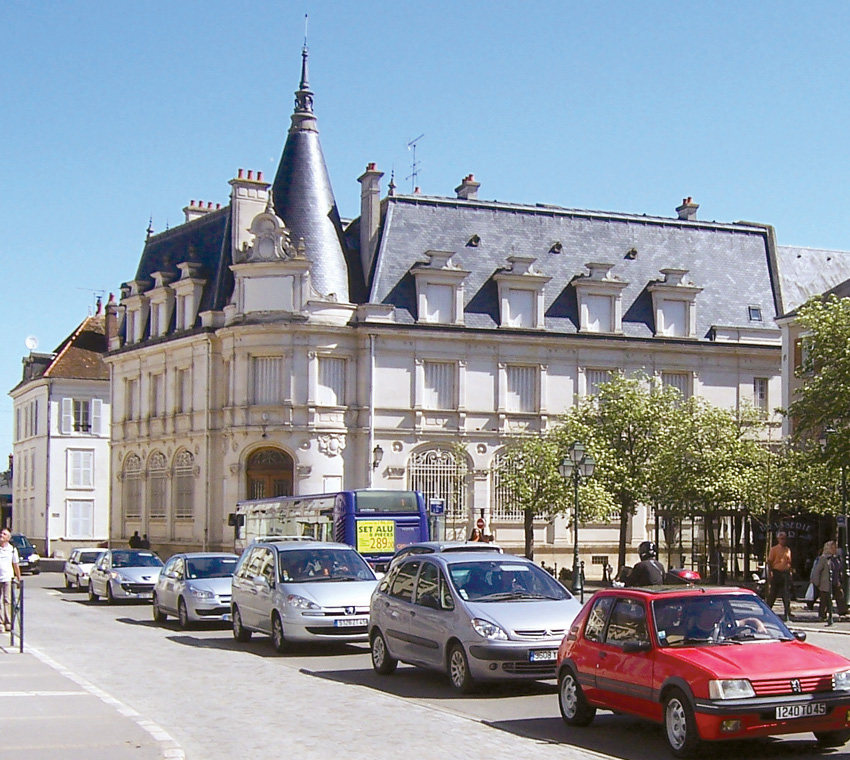 Concretely, this is understood in the French economic sector. Let me give you an example: I recently met the mayor of the small city of Montargis, south of Paris, to give him the Schiller Institute’s French-language report on the The New Silk Road, The World Land-Bridge, To End Geopolitics. He not only understood what we mean by a physical, human economy, for the common benefit of all, against geopolitics where the winner takes all, but he gave me an example of it. Montargis is launching the “University 3000 program” specializing in artificial intelligence to host Chinese students as early as next year.

This is all the more significant in that Montargis was one of the main centers where the Chinese students/workers gathered in France between 1919 and 1924, and it is there that Zhou Enlai, Deng Xiaoping, Chen Yi, and many others launched the Chinese Communist Party. I was there on May 4, 2019—this year—for the hundredth anniversary of 1919.

When we in Europe think about China, we should understand that Chang’an, our Xi’an, was the first city in the world with 2 million inhabitants under the Tang dynasty, and that Kaifeng [one of the Eight Ancient Capitals of China], under the Song, had more than a million inhabitants.

We should also remember that your civilization gave us the invention of paper, matches, bells, compasses, ship wheels, mill wheels, noodles, and many other things, such as the use of coal and gunpowder. Our 12th and 15th century renaissances would not have taken place without China and the communications from China through the Arab world.

We also know that today’s China economic policy is inspired by the works of Friedrich List and of Alexander Hamilton, and in part by the school of French indicative planning. Unfortunately—for us Westerners and Europeans—these inspirations are better understood and implemented in China today than in our own countries. In working together with you, we need, therefore, to rediscover the roots of your attachment to the future, whereas we in Europe too often tend to lament every change.

This should be in our minds when we think of our areas of cooperation today. The dynamics have to be multilateral, in their various contributions, but under a community of principle inspired by the common interests of Humanity.

The spirit of the Treaty of Westphalia, as President Xi Jinping once said, which is to seek the advantage of the other, is absolutely compatible with the Confucian principle that what you do for the other should be directed by ren [benevolence], or, I may add, inspired by the tianxia system.

CC/Jagooah
End of the Airbus A320 assembly line in the factory in Tianjin, China, September 28, 2008.

Let’s go now to concrete examples as, rightly so, China likes to do. In the long term, our cooperation is extremely significant in the aerospace and nuclear sectors.

I am happy that the Taishan I and II nuclear reactors are operational in China. The future areas of advanced cooperation are: (1) the construction of the nuclear reprocessing plant in China, a $23 billion project comparable in size to the Three Gorges Dam and a key project for both of us; (2) fusion power development, the energy of the future, with our Sino-French Fusion Energy Center; and (3) the fast neutron reactor. We hope that China will continue the development of the fast neutron dreactor, even while we French have stopped our fast-breeder nuclear reactor project, ASTRID (Advanced Sodium Technological Reactor for Industrial Demonstration).

In the aeronautics sector, Airbus, Safran (for the engines) and Zodiac (for the inner equipment of the airplane), cooperate in the COMAC 919. Airbus’s only assembly line outside of Europe is in Tianjin. Our École nationale de l’aviation civile [ENAC, the French civil aviation university] annually trains more than 60 Chinese pilots in France, and the Institute of Sino-European Aviation Engineering trains more than 80 engineers per year.

In the space sector, we have, as a joint project, two relatively small satellites, CFOSAT and SVOM, which study gamma rays produced by supernovas at the end of their lives.

But we should do much more and much better, unifying our cooperation in those sectors from top down and from bottom up, sponsoring a network of European small and medium-sized enterprises in China to create a spirit of win-win friendly cooperation around the main projects.

Among our other domains of excellence is the public health system, and in this area, the Pasteur Institute is cooperating with Chinese institutions to develop geriatric and environmental medicine.

We also have very interesting areas of cooperation which started quite well but should develop more, in the areas of smart and environmentally sound cities, treatment of toxic and industrial waste, and water distribution. Here I have something to say. It is mandatory to master and to clean the environment, in order to create the conditions for better industrial development. But this urgent matter should not be confused with a “green ideology” that promotes nature against human beings, considered as polluters or looters. The optimism of your culture should help us to get rid of the pessimistic attachment to a rogue green ecology, which is transforming our Western countries into an anti-science, Malthusian world outlook exploited by destructive financial interests.

I have not spoken of the automobile industry, because I think that it is in the process of becoming fully Chinese, or about our luxury goods produced in Europe, which may meet market demands but not secure the take-off of economies. 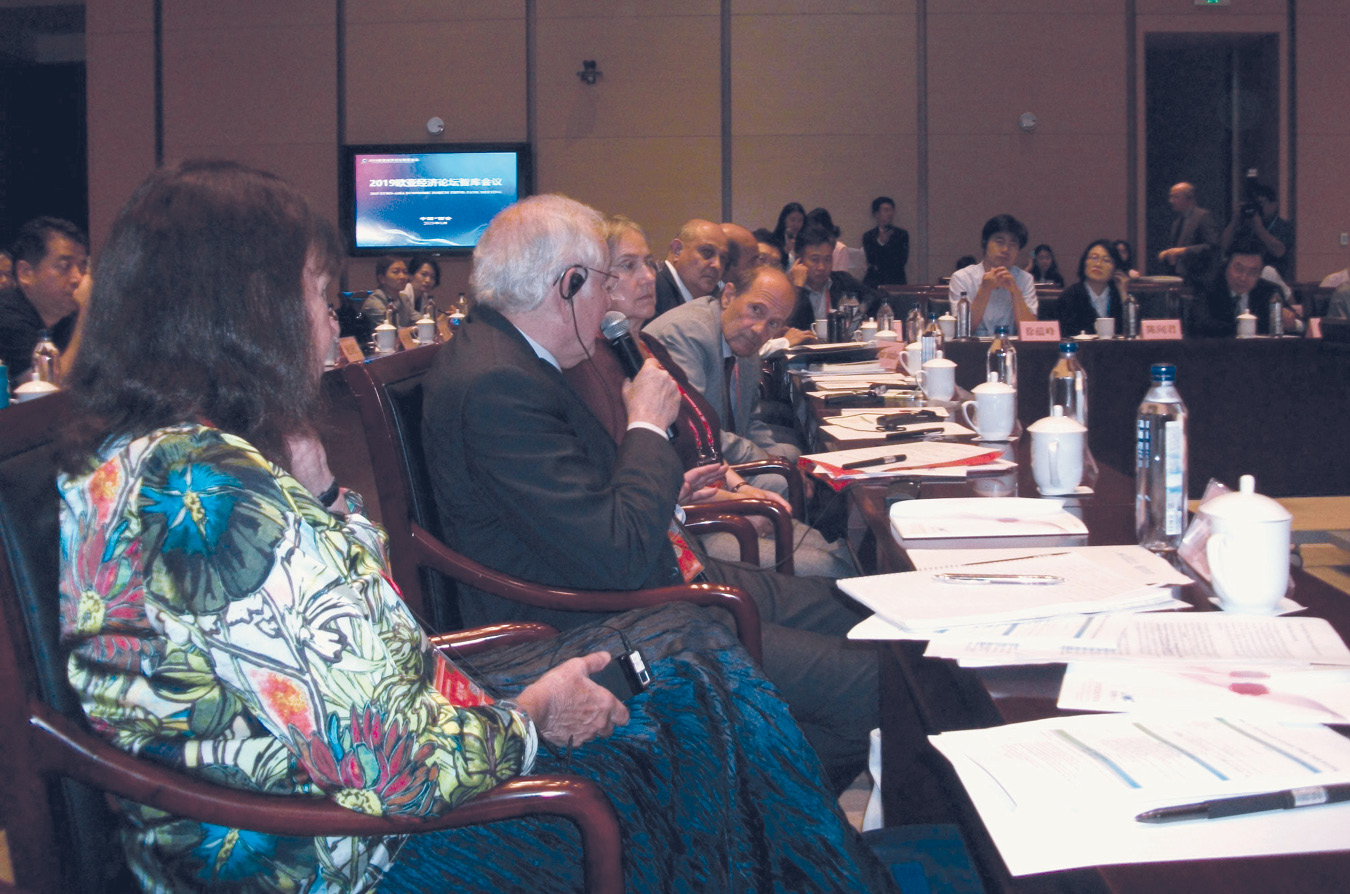 The two main areas of cooperation for the future are above all, Chinese investments in France and in all of Europe. First is port development: The great Paris-Rouen-Le Havre (HAROPA) project connects Paris, our capital, into a single integrated port oriented towards both Asia and Northern Europe. On the southern part of our continent, there are the Italian, Spanish and Portuguese ports of Genoa, Valencia, and Sina; to the north, Antwerp, Zeebrugge and Hamburg; and let us not forget Piraeus and Tangiers. Secondly, we are rediscovering in France, through economic necessity, which is also very important for China, what we call “territorial development,” (aménagement du territoire). It means bridging the welfare and economic development gaps between the countryside and the cities by distributing and managing resources more efficiently.

Finally, France and other European countries have a broad and promising area of cooperation with China in the development of African nations. President Macron declared here in Xi’an: “I express my wish for the commitment of China in Africa.” We have to overcome prejudices on many sides, but a fair and straightforward approach will remove those obstacles, the important needs of our partners being an open door for us all.

Let me end my presentation with this from Karl Marx, that labor gets hold of things and “resurrects them from the dead,” to which your governments have given Chinese and Confucian characteristics. Those, together with the Greek and Christian notion of agape¯, should lead our cooperation to enter a new paradigm, free from imperial designs and opening an Age of Reason.

To happen, it must include the contributions of the world’s main powers, China, Russia, India and the United States, for a new economic system, the New Bretton Woods conceived by Lyndon LaRouche, towards which the New Silk Road opens the way. To contribute to it, Europe has to awaken from its “sleep of reason,” because the sleep of reason generates monsters. Europe must become a positive factor, not a bystander harboring grudges, subject to imperial follies. And we all agree that to face the danger—the immediate danger before us all—requires a very impatient, cooperative patience.