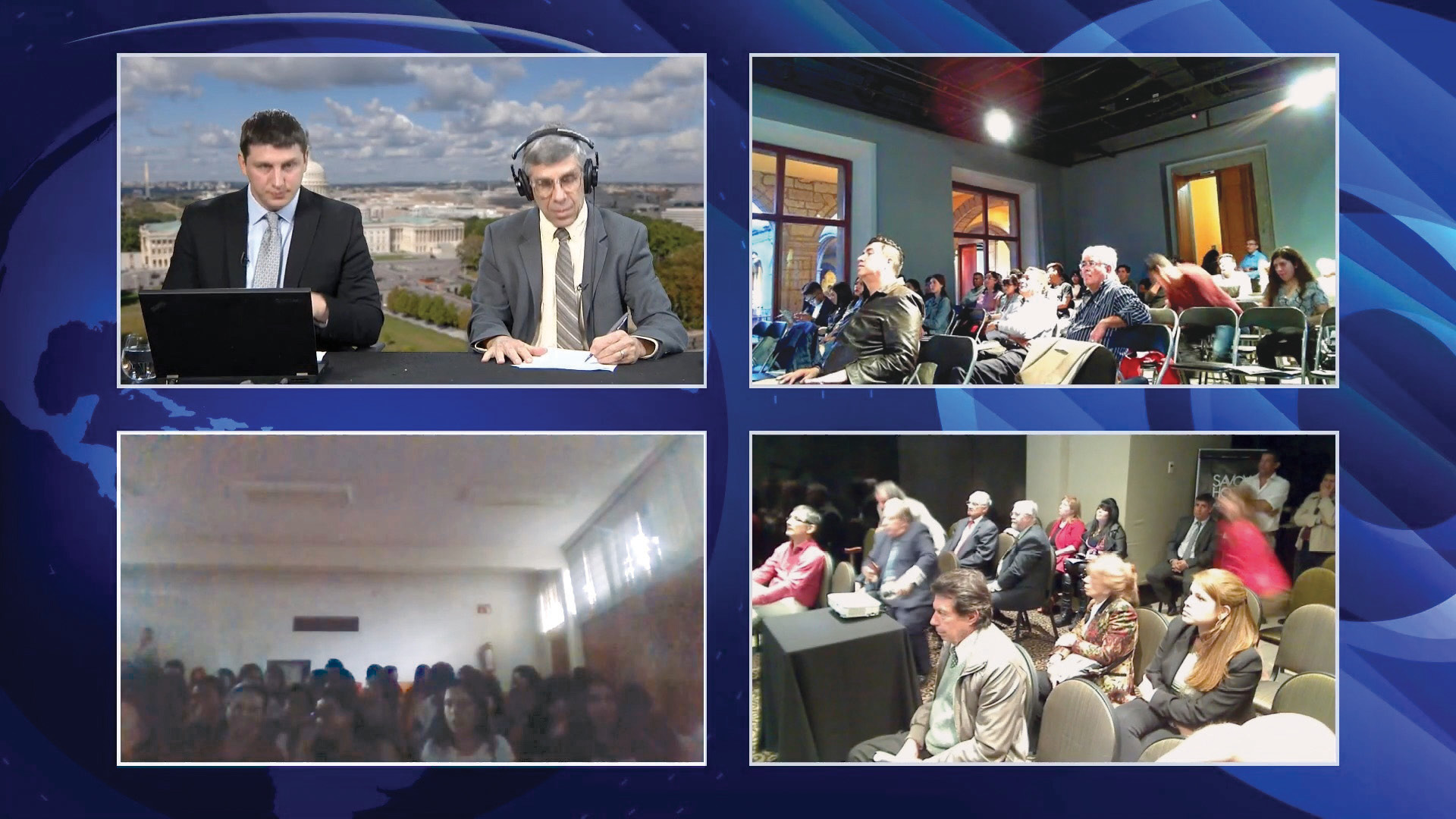 Sept. 30—“This is an excellent job, and I want to congratulate today’s speaker, Ben Deniston of the Schiller Institute’s scientific research team, and congratulate all of you for the work you are doing to shed light on the truth about this misleading ‘climate change’ story that has been intentionally introduced, and whose source comes from Great Britain, which always makes us suspicious about its origins and goals,” stated Air Commodore (ret.) Horacio Ricciardelli of Argentina, at the outset of the Q&A session of the Schiller Institute’s Sept. 26 Spanish-language webcast on Lyndon LaRouche’s Moon-Mars Mission. The webcast featured Ben Deniston of LaRouche’s scientific research team, speaking to some 200 people, over half of them students, gathered in four locations—Mexico City, Hermosillo and Querétaro in Mexico, and Buenos Aires, Argentina—to participate in a live dialogue.

I was the deputy director of Argentina’s National Meteorological Service for a number of years. Beginning in 1979, I participated in various international gatherings in Geneva, which is where the World Meteorological Organization is based. I also have experience in the Air Force—I’m a Malvinas War veteran. . . . I want to corroborate [what Deniston said], that you cannot talk about temperature change over one year, ten years, or 100 years. You have to talk about hundreds of thousands of years.

He added that he had traveled across Antarctica many times, including to Argentine, American and other bases on that continent, and that he concurred not only with the science presented by Deniston, but also with his identification of the source of the lies being promoted:

As for the sensationalist and alarmist views [on global climate change], all you have to do is look at the people who are behind this policy of population reduction: Prince Philip of the United Kingdom, Prince Bernhard [of the Netherlands], and their Anglo-Dutch associates involved in running these attacks on life, including abortions and, soon enough, genocide against the elderly.

Deniston’s speech—which will be published, along with excerpts of the Q&A, in the next issue of EIR—was titled “Climate Change or Creative Change: Mankind’s Next 50 Years in Space,” and it presented both the scientific fraud of the CO2 climate change scare and its British imperial origins, as well as an optimistic scientific view of Man’s future, based on fusion-powered space exploration and colonization, beginning with a Moon-Mars mission as designed by Lyndon LaRouche and the great German-American space scientist, Krafft Ehricke. It triggered a lively discussion during the Q&A session which went on for more than an hour.

Dialogue Across Generations and Continents

What made the webcast a success, is that it was a dialogue about the future with the youth who will be instrumental in shaping it, based on the outstanding achievements of the past—all centered around the scientific breakthroughs of the recently deceased American statesman and physical economist, Lyndon LaRouche.

The history of Argentina’s National Meteorological Society is directly relevant on this point. It was founded in 1872 by Benjamin Apthorpe Gould, an American astronomer/physicist who settled in Argentina to found the National Astronomical Observatory in Córdoba in 1870. Gould, an American System scientist in the circles of Alexander Dallas Bache, had studied at Göttingen under Carl Gauss. Gould’s associate, Walter Davis, also an astronomer/meteorologist, became the director of the Meteorological Society in 1885 and ran it for thirty years, until Argentine associates took over. Gould reflected the coming together of the American System and Humboldt-Göttingen scientific traditions, which exist to this day in Argentina.

It is in significant part due to these overlapping Argentine and American historic traditions that Lyndon LaRouche’s scientific, strategic and economic work has always resonated so strongly among Argentine nationalists. When LaRouche visited Argentina in 1984, at the heart of the international battle for his Strategic Defense Initiative policy, which President Ronald Reagan had adopted in March 1983, LaRouche held extensive, in-depth discussions with Argentina’s leading nuclear and space scientists, top military leaders and strategic planners, and President Raúl Alfonsín.

In addition to the participation of scientists and engineers in the webcast, the second key feature was the presence of young people, who made up about half of all the participants. They were largely university students, and Deniston’s presentation had a major impact on them. By and large, young people in Ibero-America, like their American counterparts, have not fallen fully for the green propaganda, despite the massive media brainwashing campaign, and the participants were open and happy to discuss real science. The Q&A session reflected this process, and many of them asked for follow-up discussions, classes, and so on.

For example, in Mexico City a student of international relations told Deniston:

I’m sort of struck by this, because I’m one of those people who has a moral problem, because I don’t know whether or not to believe everything they tell me is true. I really thank Mr. Deniston for having enlightened us with this information. How can we fight against this fear? How can we unite to benefit all humanity?

How would you go about transporting helium-3 from the lunar surface to Earth? How do you make sure no one country controls all resources? Would an organization be created to regulate these kinds of projects?

A group of students in San Juan del Río, Querétaro, in Mexico, asked simply: “Why should we colonize space?”

And a student in Querétaro commented, after a follow-up discussion of LaRouche’s Moon-Mars project:

I really enjoyed the presentation; it was a first for me. I love LaRouche’s ideas, and will look into them further. I’d like more youth to join in this effort.

A second student in Querétaro added:

The way the discussion went addressed that gnawing doubt I’ve had, of how to build a new consciousness for the future, to improve our country and the world. 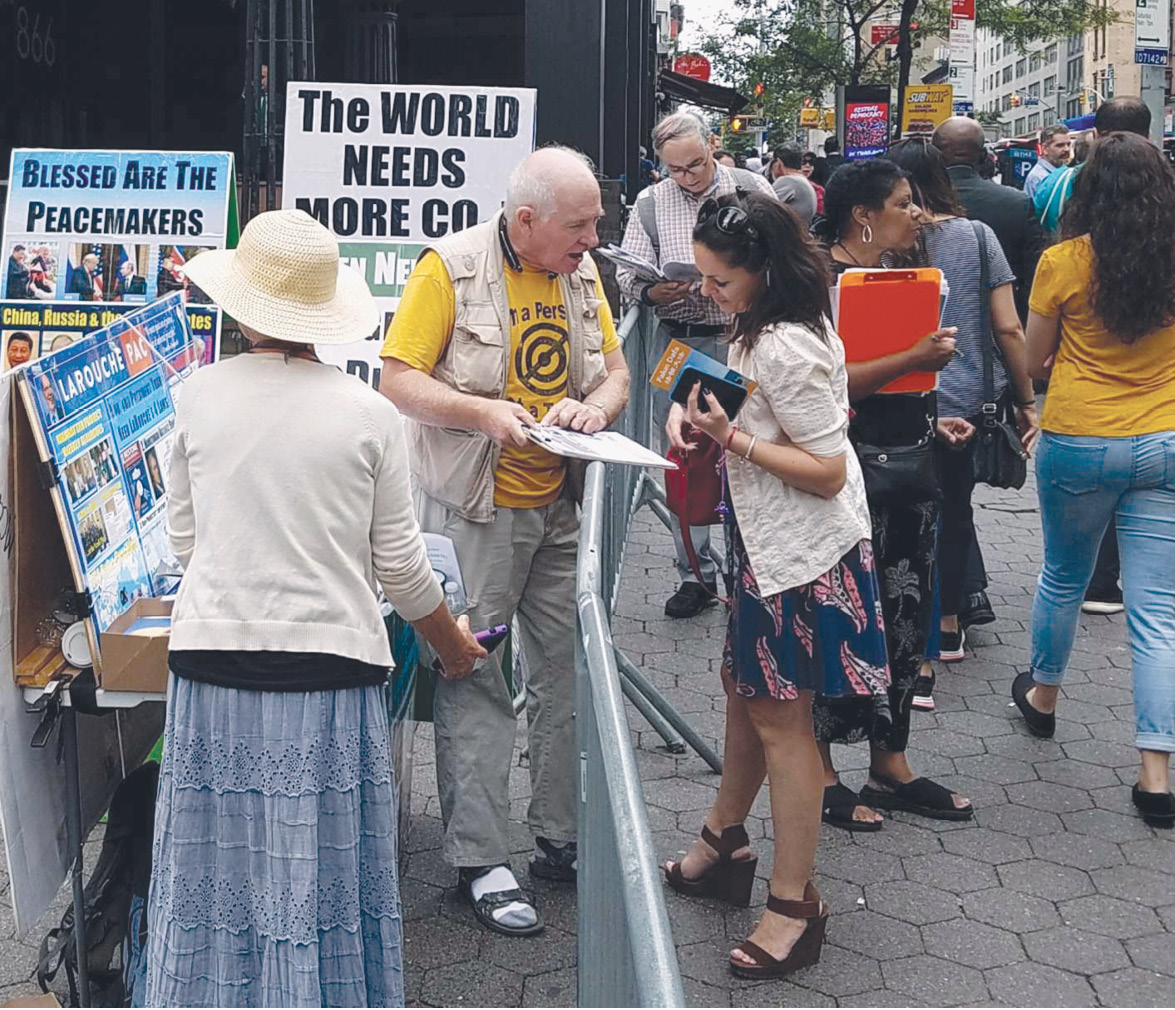 EIRNS/Eli Santiago
LaRouchePAC organizing at the UN in New York City on September 24, 2019.

The same week as the Ibero-American webcast, LaRouche activists in New York City also conducted a very high-profile exposure of the banksters’ green fraud at rallies outside the United Nations. Dozens of organizers were in the Dag Hammarskjöld Plaza on Sept. 24, the opening day of the UN General Assembly heads of state debate. They distributed thousands of copies of the press release on the new EIR dossier, ‘CO2 Reduction’ Is a Mass Murder Policy by Wall Street and the City of London. Using a loudspeaker, they elaborated the message of their big banner: “The World Needs More CO2! Green New Deal Is Genocide. Crush the British Empire.” Scores of ambassadors, and thousands of international visitors streamed by, attending the first day’s session, addressed by U.S. President Trump and others. One prominent poster stated, “A Good Relationship with Russia and China Is a Good Thing!”

The same day, across the street, was the bankers’ confab, the Bloomberg Global Forum, at the Plaza Hotel. Besides billionaire host Michael Bloomberg, who is the UN Special Envoy for Cities and Climate Change and director of “Beyond Carbon” to shut down coal plants, there were many bankers, including outgoing IMF Chairman Christine Lagarde and JPMorgan Chase Chairman Jamie Dimon. Demonstrators in front of the hotel spoke with many of the conferees directly. One Argentinian demonstrator told Lagarde personally, “Thank you. Thank you for destroying my country.”

When Bank of England Governor Mark Carney, who addressed Bloomberg’s Forum, came out of the event, he was shown the “Mass Murder” dossier and was read the full title by Daniel Burke, candidate for U.S. Senate from New Jersey. Carney snapped at Burke, “You’re quite wrong about that,” and attempted to quickly walk off to avoid any more contact. But Burke spoke out clearly, “Mark Carney’s policies are genocide! To prevent nations from building power plants is to condemn the people to death. Nazi bankers must be jailed!” Carney got into his car, and rode away stone-faced.