Greetings from Russian Ambassador Antonov to the Schiller Institute Conference 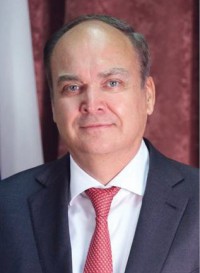 Greetings by Ambassador of Russia in the U.S.A., Anatoly I. Antonov, to participants of the Conference “Mankind as a Galactic Species” on October 5, 2019.

It is a pleasure for me to greet all of you at the Conference “Mankind as a Galactic Species.”

For centuries, people had been dreaming of the conquest of space. Russia is proud that it was our compatriot, Yuri A. Gagarin, who made the first space flight on April 12, 1961 and thereby opened a new era in the history of humankind. This event was a scientific and technological breakthrough which paved the way to unexplored horizons. More than 560 people have been on the Earth orbit since then. Thanks to cosmonauts, scientists and engineers from different countries, unique technologies were created which now serve all people on the planet.

As leaders in space exploration, Russia and the United States have a long history of constructive cooperation in this sphere. We jointly implemented such large-scale projects as “Soyuz-Apollo” and “Mir-Shuttle.” Nowadays, we are successfully working at the International Space Station.

I am sure that our countries’ productive collaboration in space will continue for the sake of progress and development of all humanity.

I wish you a successful Conference!