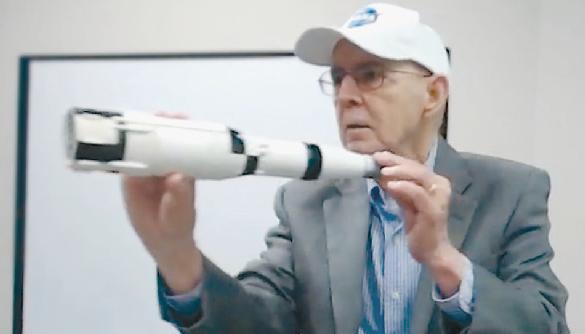 Schiller Institute
Retired physicist and top NASA scientist F. Don Cooper shared his experiences creating the technology that helped launch Apollo 11 at a Schiller Institute celebration of “Observe the Moon Day” in Houston, Texas on May 5, 2019.

Oct. 6—As speakers, guests and an audience connected by internet gathered in New York City on October 5 for the Schiller Institute’s Conference, “Mankind as a Galactic Species: The Necessary Alternative to War,” a sister event was taking place 1,400 miles away in Houston, Texas.

The Houston event—which included a simulcast of Helga Zepp-LaRouche’s speech to the New York meeting, as well as the playing of the Dec. 3, 2009 video presentation by Lyndon LaRouche (both available in this issue of EIR)—presented its own panel of speakers, including Don Cooper, a retired physicist and former top scientist with the Apollo space program; Joel DeJean, a LaRouche PAC leader and engineering expert; and a filmed interview with Mike Paluszek, President of Princeton Satellite Systems, the leading U.S. firm in the field of Fusion propulsion.

Former Congressional candidate and LaRouche PAC leader Kesha Rogers hosted the event and delivered remarks of her own. In her opening statement, she reminded the audience both that October 5 is “International Observe the Moon Day,” and that this is also simultaneously National Space Week. Rogers asked the meeting’s participants to consider that all great human progress is the work of visionaries. Stating that we have to begin to view humanity as a galactic species and that “the Moon is the gateway to the stars,” she challenged each audience member: “You have to become a visionary.”

Don Cooper provided the audience with an overview of U.S. efforts in rocket science, beginning with the work of Robert Goddard in the 1920s. He then presented a first-hand account of his years of work at NASA, including his role in developing technology for the Apollo 11 mission to the Moon, his work on the Saturn V rocket, and the work of his team in safely returning the crew of Apollo 13 to Earth. Mr. Cooper described the outreach he is constantly involved in with high school and other students, urging them to take up the challenge to build a better future.

Joel DeJean presented a detailed overview of the leading research efforts in Fusion energy now underway in the United States, including at Princeton University, Lawrence Livermore National Laboratory, and Lockheed. He stressed the importance of what access to the helium-3 deposits on the Moon will mean in escalating all of these research projects. He also discussed the importance of the France-based international Fusion project, the ITER (International Thermonuclear Experimental Reactor), a collaborative effort of 35 nations.

The event concluded with a filmed interview with Mike Paluszek, President of Princeton Satellite Systems, a company which is now intensively working on what is called Direct Fusion Drive, using a small, 1 megawatt fusion device for rocket propulsion, as well as for many potential applications on Earth. Such a fusion drive will allow a rocket to reach Jupiter in one year and Saturn in two years. Here again, Mr. Paluszek stressed the importance of helium-3 as the fuel component which is vital to making such a fusion drive possible.